On the east side of Nebi Samuel,  the archaeologists reconstructed a well preserved section of a village dated to the Hasmonean/Maccabaeus period (2nd-1st C BC).

According to some scholars, this might have been the place called Mizpah of Benjamin, although there are other candidates for the famous Mizpah.

For a general description and history of Nebi Samuel – refer to the overview page.

The Hasmonean ruins are located on the south-east side of the mosque: 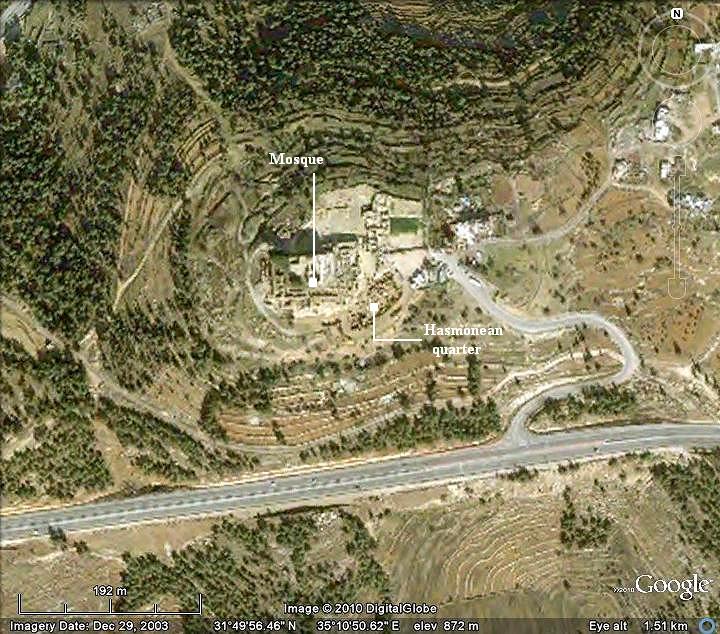 This section on the history of the place focuses on the Hasmonean/Maccabee period. For a full history of Nebi-Samuel – check the overview page.

The Maccabees headed the rebellion against the Greek Seleucids who controlled the land of Israel during the second half of Hellenistic period (4th C – 1st C BC).

After a series of successful military campaigns they took control of Judea, liberated the land and created an independent Jewish country, known as the Hasmonean Kingdom (164 BC to 63 BC as independent state, and 63-37BC as rulers under Rome). 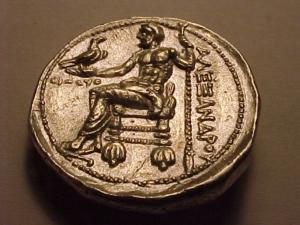 As part of the military campaign of 165BC,  Judas Maccabaeus – the leader of the revolt against the Seleucid empire (167-160BC) – assembled the Jewish forces in Mizpah, and launched a successful attack against the Syrian forces  ( 1 Maccabees/Hasmonean  3 46): “Then they gathered together and went to Mizpah, opposite Jerusalem, because Israel formerly had a place of prayer in Mizpah”.   Mizpah (of Benjamin) is identified by many scholars as the hill of Nebi Samuel, which makes sense for a good place for launching the attack and also protecting the entrance to Jerusalem.

The course of the Emmaus battle is illustrated on the map below. First, the Syrian forces (commanded by Seleucid Generals Nicanor and Gorgias) arrives and camps in Emmaus (red color), while Judas Maccabeus  (blue color) gathered 3,000 men and assembled in Mizpah. Then, General Gorgias headed at night from Emmaus to Mizpah to seek the camp of Judas. When Judas learned about the Syrian split, he exploited this opportunity by moving his forces during the night to the outskirts of Emmaus. In dawn they attacked, defeated the surprised Syrian army, and burnt their camp. General Nicanor’s troops then flee to Gezer. Gorgias, who found an empty camp in Mizpah, returns back to Emmaus to find that their camp on fire, and also flees. 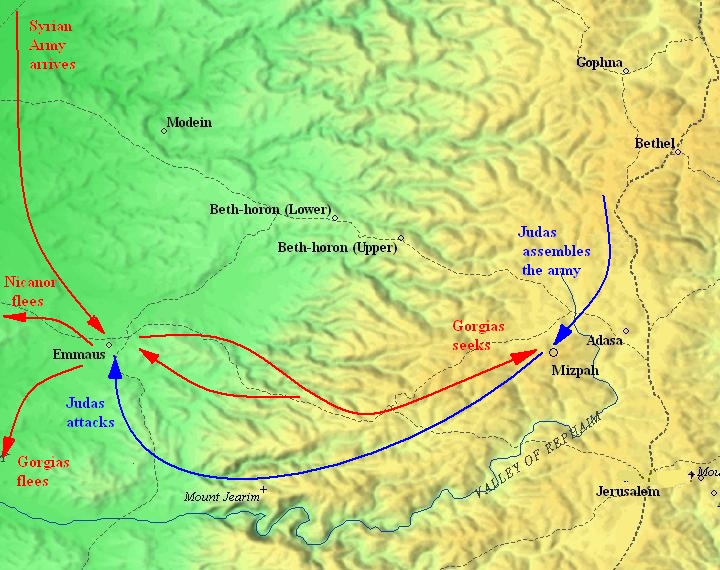 Map of the Battle of Emmaus   (map drawn by Bible Mapper 3.0)

After the great victory in the Emmaus battle, followed by another successful battle of Beth-Zur in 164BC, Judas finally liberates the Holy city of Jerusalem (Dec 14, 164 BC) and establishes the Hasmonean Kingdom, which lasted for 100 years  as an independent Jewish State.

Although the Maccabees/Hasmonean continued to fight their enemies and struggle with internal feuds, they grew the size of their territory from their small home city (Mode’in – 167 BC), to an area encompassing the region of  Judea  and Jerusalem  (164 BC), and finally – at the end of the reign of Alexander Jannaeus in 76 BC – to contain the greater area of the land of Israel.

The hill of Nebi Samuel was a strategic fortress for the Hasmoneans. It allowed them to watch out for incoming enemies, with a great view of all the major roads that connected the land to their capital Holy city of Jerusalem. Furthermore, its religious significance was also important for the Jewish rulers.

During the extensive archaeological excavations held in Nebi Samuel, the excavators found a  surprising large quarter under the Ottoman and Crusader layers. It was dated to the Hasmonean period – from the 2nd century BC to the 1st century BC. This section is located on the south side of the mosque, since the Crusaders totally cleaned the other sides. The archaeologists reconstructed a section of a village, with well preserved houses and streets.

This village existed until the end of reign of King Alexander Jannaeus (Hasmonean King, 103-76BC), when suddenly the site was evacuated for, yet unknown, reason.  Perhaps, the village was destroyed as a result of the internal feuds which erupted between 94 to 84BC.

On the east side of the hill are remarkable remains of dwellings dated to the Hasmonean period village (2nd centuryBC to the 1st century BC). This area was not damaged by the Crusader rock cutting, like on the other sides where the Crusader stonemasons cut deep into the bedrock.

The houses are built along the hillside, and were tightly built like a maze. These two story houses were preserved to a height of 4.5m. They  are designed as several rooms located around a courtyard. 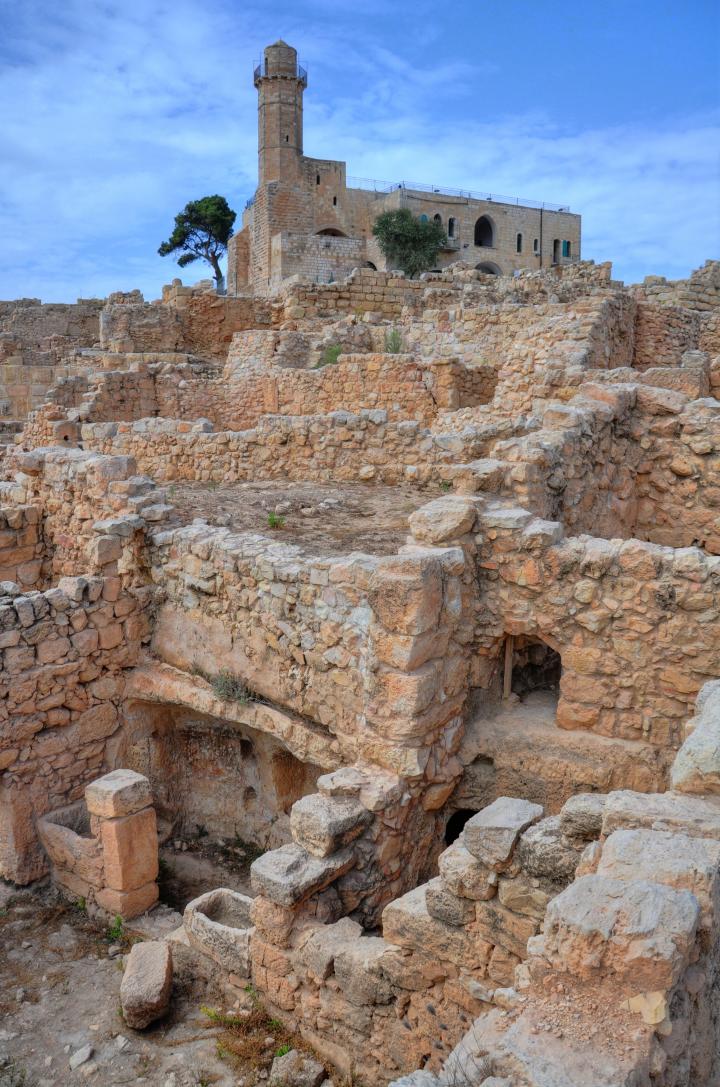 The picture below shows a view of the Hasmonean quarter from the south side. 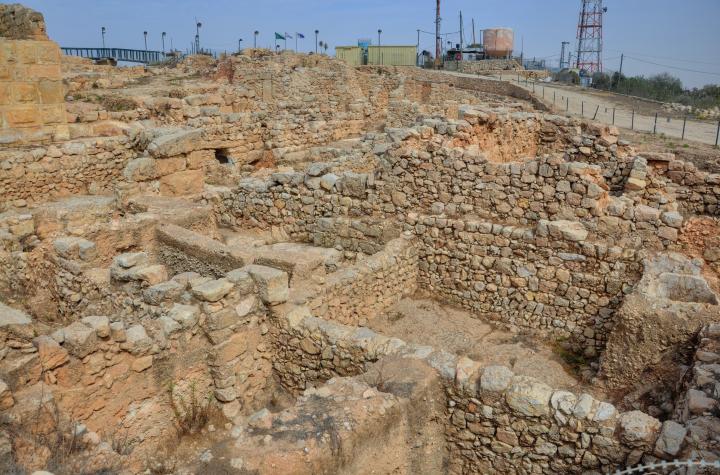 The following pictures show the houses in the Hasmonean quarter, moving from east to south-west.

This house  has two stories, with the street seen behind the wall on the left. The walls are constructed of trimmed stones which are covered with plaster. The lintels (horizontal blocks) and doorposts are made of dressed, squared thin stones (ashlars).

Several stone basins, seen in the courtyard, contained water which was fetched from underground cisterns. 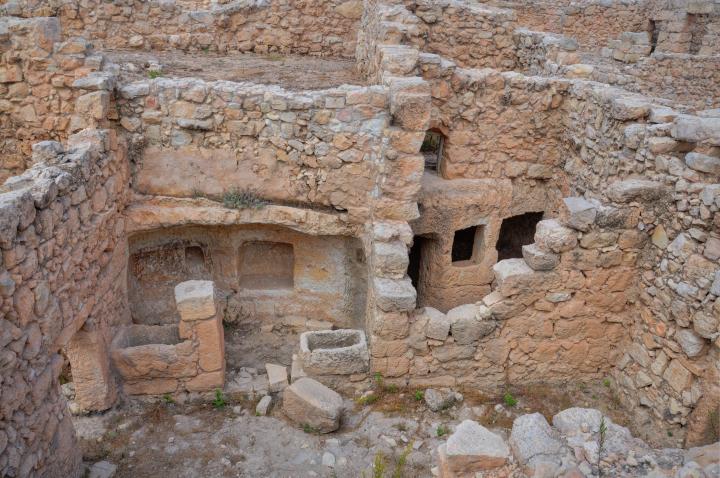 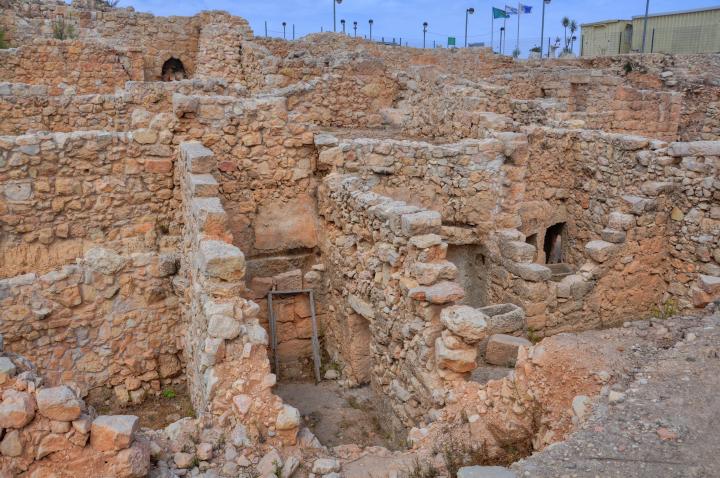 Moving more towards the south, a view towards the west side is shown below. The Crusader and Ottoman period walls and mosque are seen in the background, built on top of the Hasmonean remains. 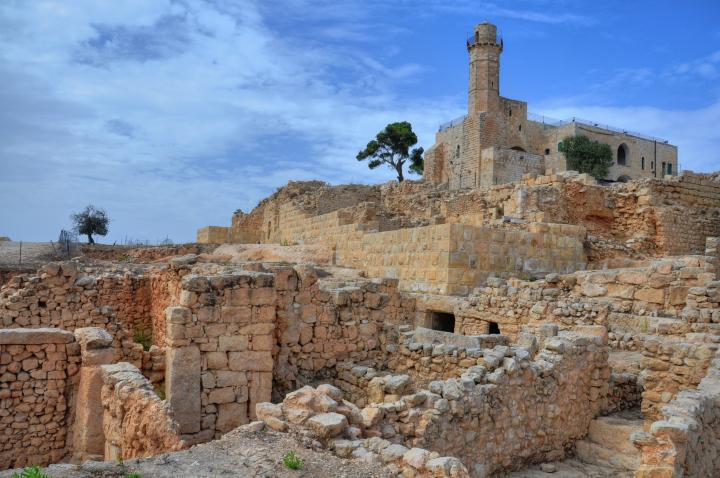 The next picture shows this section, but closer to the south side: 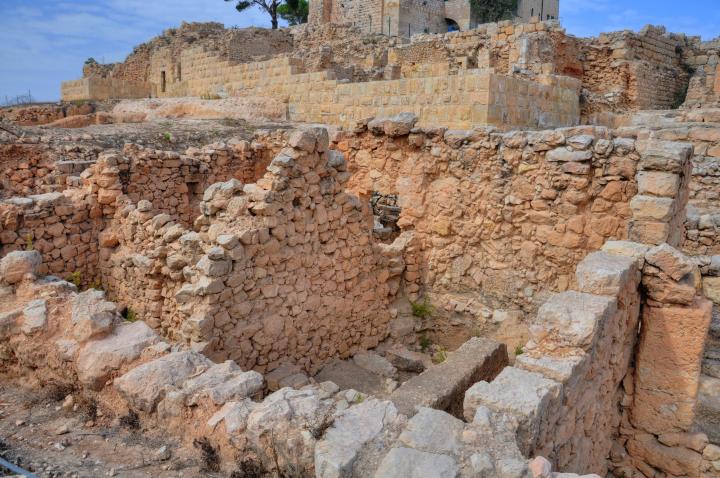 A number of streets traversed the residential quarter along the hillside. The street seen below, in a view facing the south-west side, is 3.5m wide and was reconstructed along 50m. 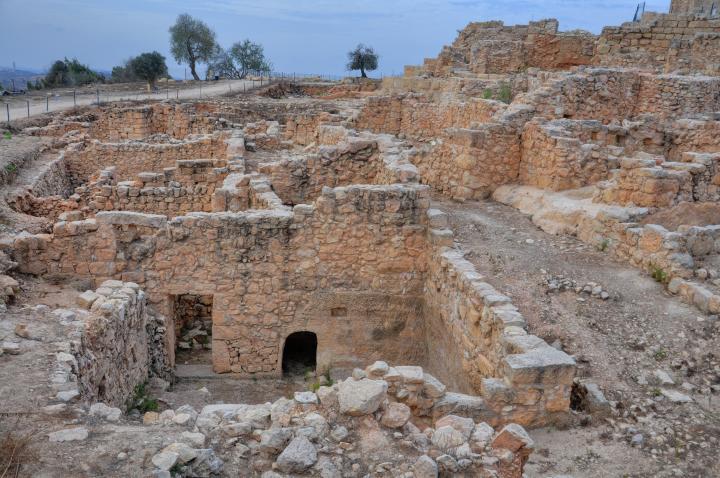 On the north-west side several first-temple burial caves were found, including the following one. 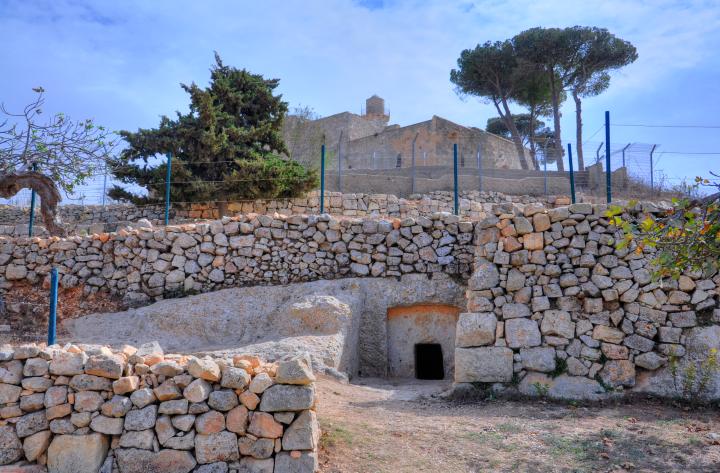