An ancient oil press located in Mi’ilya, a  Greek Catholic village in the west upper Galilee. The structure was part of the Crusaders fortress.

Mi’ilya is a Greek Catholic (Melkite) village in the west upper Galilee. It  was built over the ruins of the 12th C  Crusader fortress.   On the top of the hill, adjacent to the Crusaders fortress, is a 1,000 years old structure with an old oil press.

The site was also a large Bronze and Iron age city, and is identified as “Aloth” which is listed in the cities of King Solomon.    For more details on the village, see the Mi’ilya page.

The village of Mi’ilya is  located on the main road from Acre to Ma’alot, south of the Montfort castle.

The oil press is located near the ruins of the Crusaders fortress, on top of the hill.

The structure where the oil press is located was built during the Crusaders period.

The ancient oil press is open to the public. It is operated by Kassis family, who reside in front of the structure. It demonstrates the old methods of cold processing of olive oil.

The photo shows the view of the Crusaders fortress, as seen from the bottom of the steep hill. The fortress is in a bad shape and only few sections of the walls remain. Some Ottoman period houses were built inside and around the ruins, including the oil press which is located behind the house on the right side. 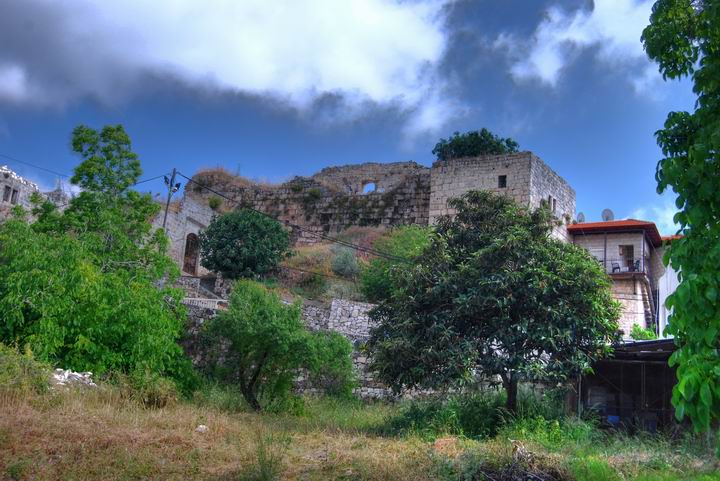 Inside the ancient Crusader structure is an oil press, where the ancient process is demonstrated. This ancient hall is about 1,000 years old and the oil press is in operation for about 400 years. 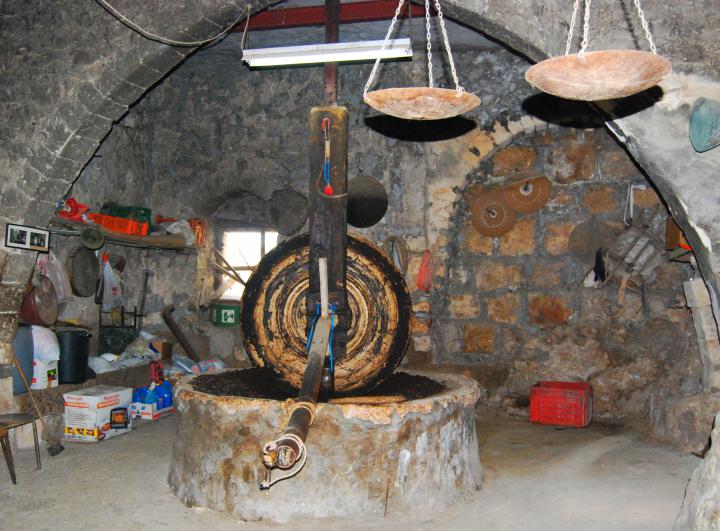 (b) The stone oil press

The oil extraction is based on crushing the olives by a large weight. There are different techniques for oil presses. In this case the oil press is based on a heavy round stone that rolls along a grooved base. The crushing stone has a hole  in the center, where a handle is connected on a vertical axis. A donkey is used to pull the handle around the stone. The crushing stone rolled around the basin, mashing the olives and extracting the golden oil. This oil press is classified as “type 3” in R. Frankel’s reference. 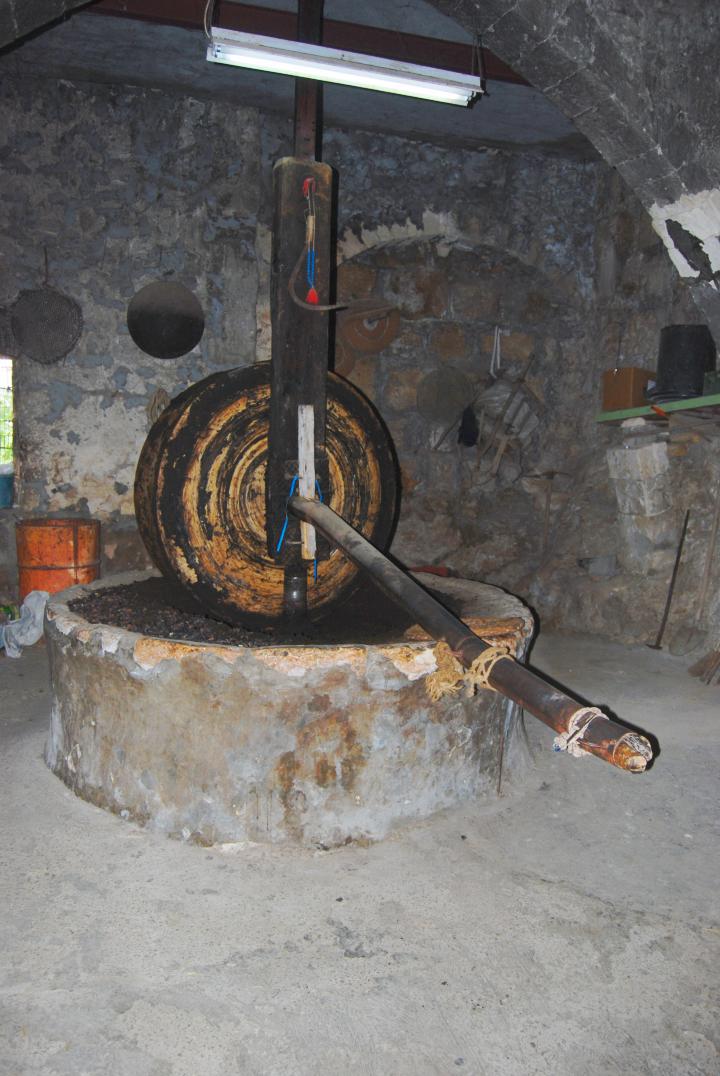 A closer look on the basin shows the olive seeds and paste that was left from the crushing. 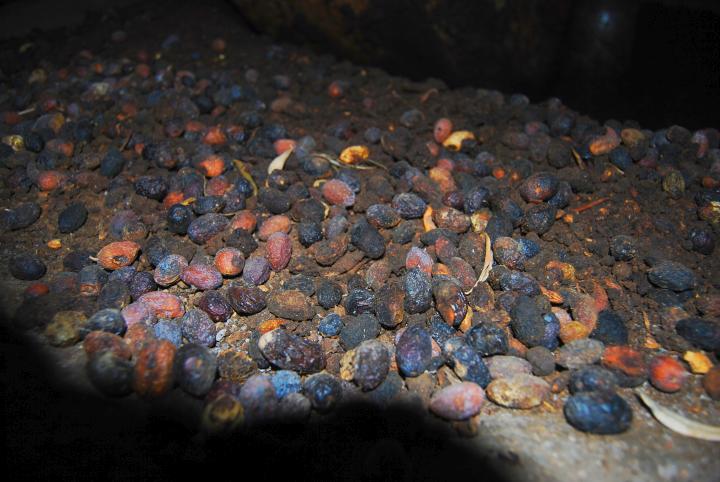 The process is called “cold processing”, and yields a quality oil. From 10KG of olives the yield is about 1 Liter. The result of the oil extraction is seen below – a bottle of golden olive oil that is sold here.  Another result is olive oil soap. 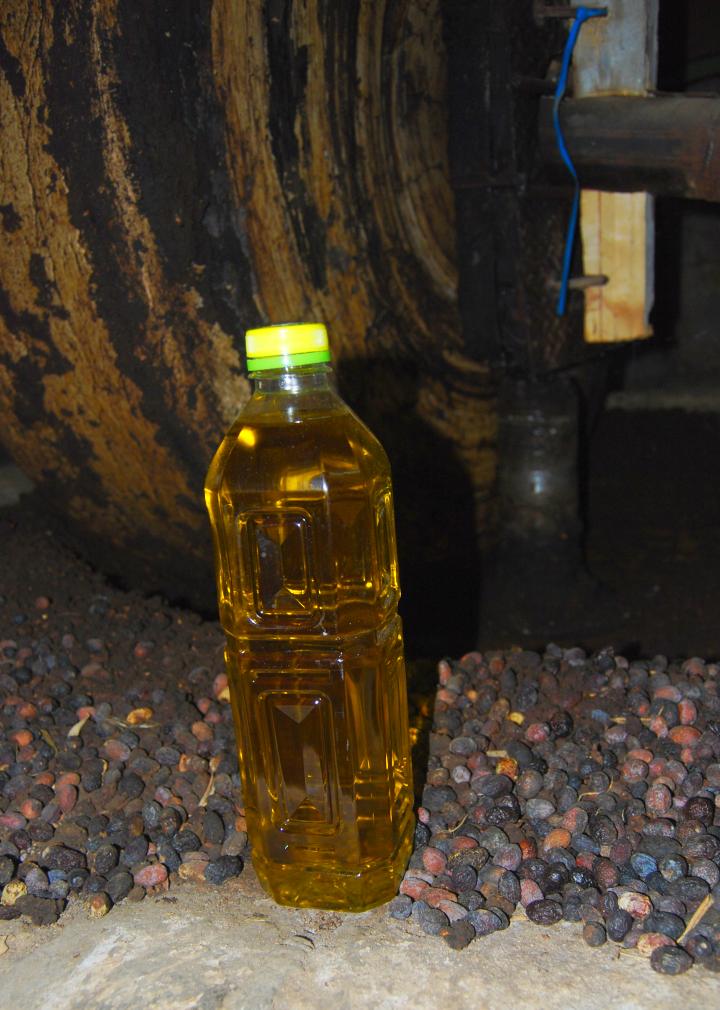 This technique was in use for thousands of years, and in many ancient sites there are various types of oil presses. Olive oil was one of the main income in Biblical times, and even today it remains one of the main sources of income of the Arab farmers in Israel.

A 150 year old “modern” oil press machine, made in Marseille by Lion and Co, improves the process of pressing on the olives in order to extract their oil. It uses a metal screw that is turned around with a handle, crushing a metal plate on top of a number of baskets that hold the olives. The weight extracts the juice, which flows into a sink below the press. 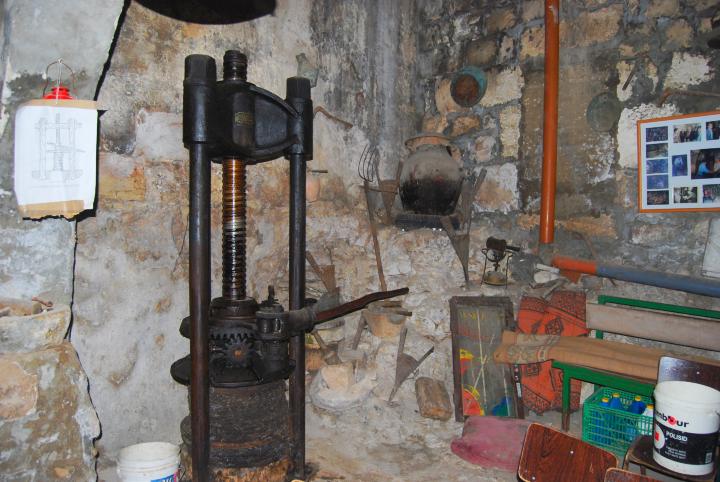 An example of a basket that holds the olives is seen below. This method was also used in ancient times, but based on wood and stone rather than metal. It is  called “direct pressure screw” press, and is  classified as “type 7” in R. Frankel’s reference. 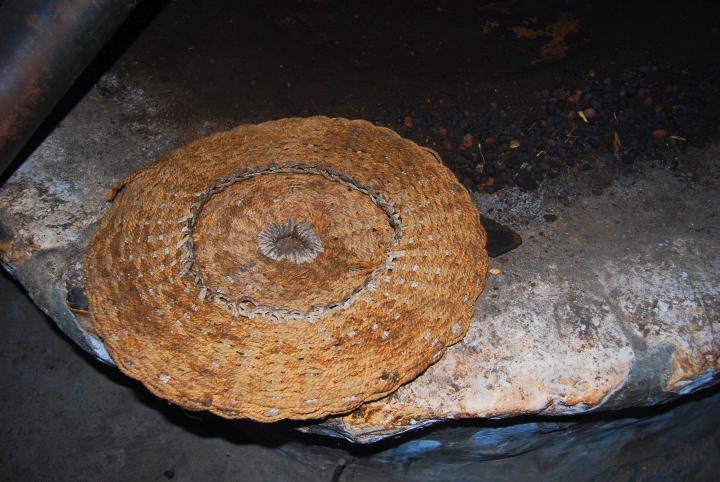 The extracted oil then flows into the sink below the press, as seen in the photo below. The juice contains water and oil. After a few days, the lighter oil in the juice floats above the water. It floats  up the green cylinder, and thus the oil is separated, removed and bottled. 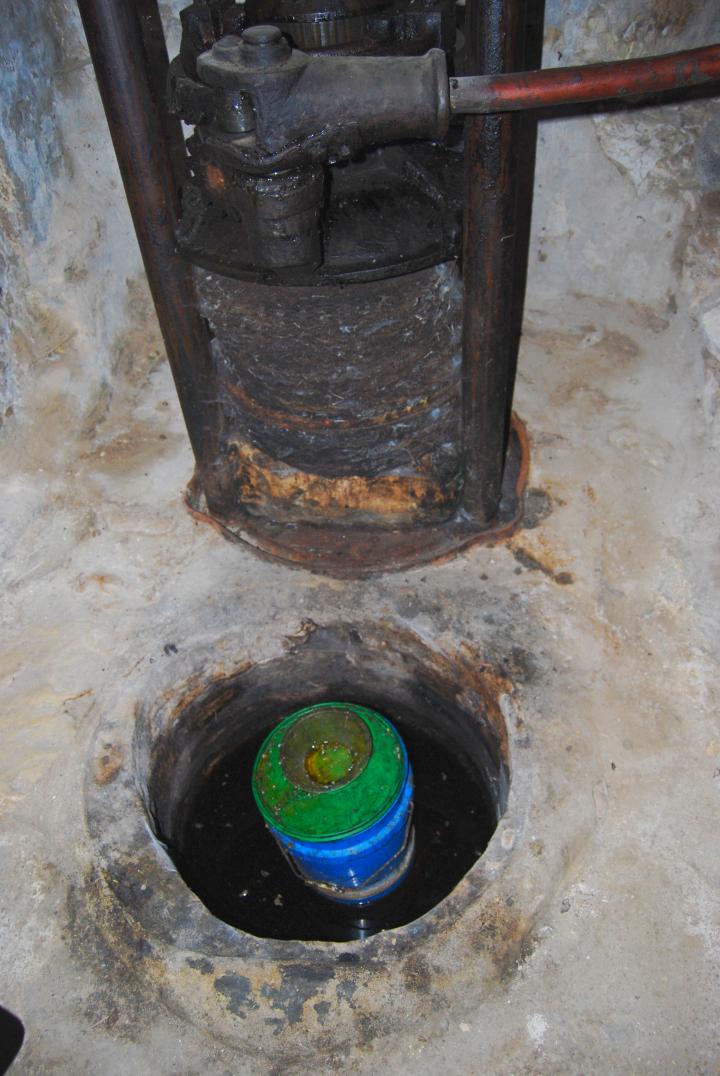 A collection of old agriculture tools are hanged along the walls. The metal arrow-shaped heads were used to plow the soil. The jar was used to store the olive oil. 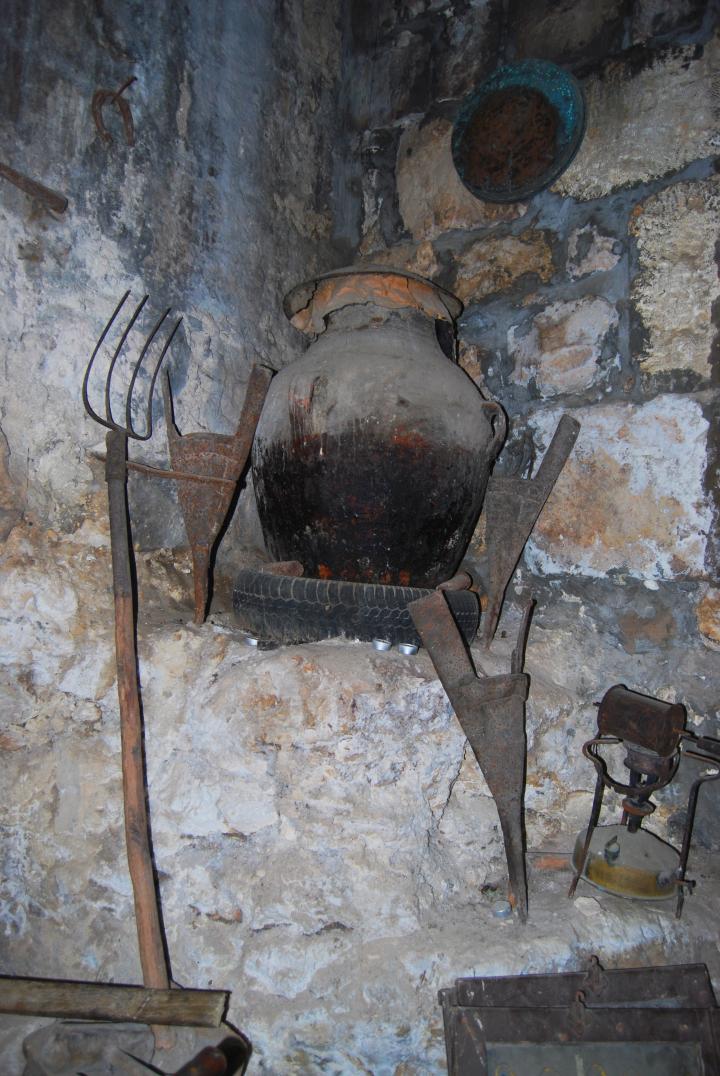 Another item,  seen in the photo below, is a plow that was strapped to a donkey. 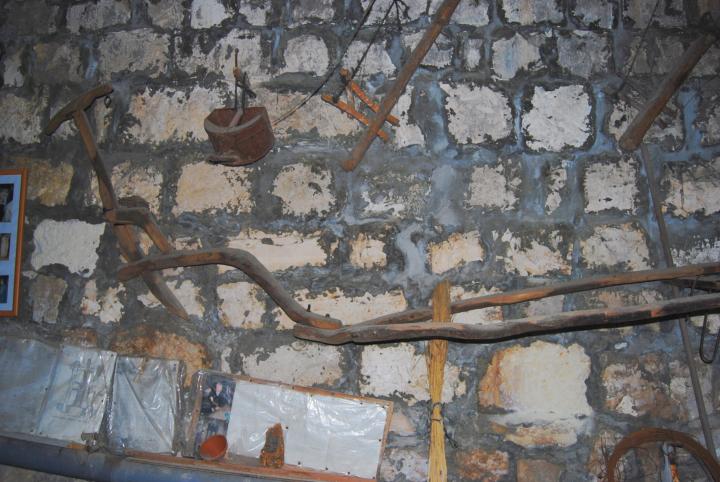 In the village, and around it, are olive tree groves which are the source for the olive oil production. The photo below was captured on the road from Mi’ilya to Mitzpe-Hilla, with goats grazing between the olive trees. 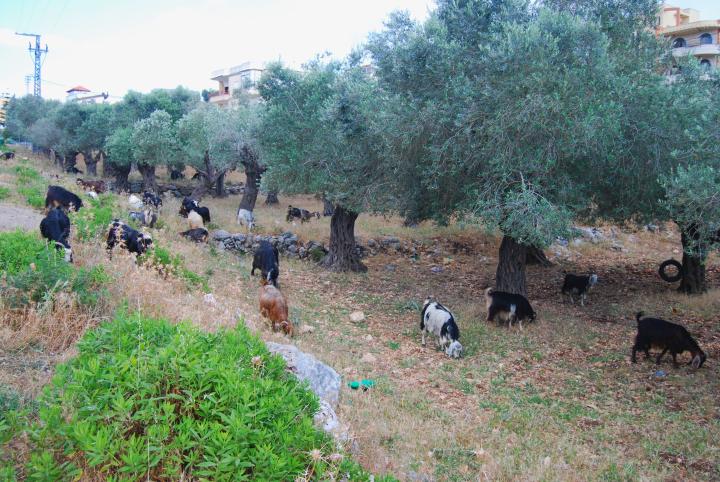 If visiting Mi’ilya, why not visit Salim’s chocolaterie… 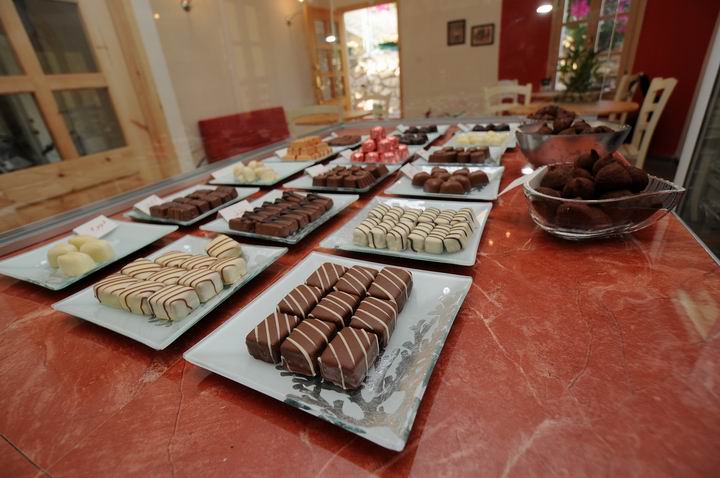