Today an Arab city (Kabul) 8KM from the bay of Haifa, on the west hills of the Galilee. It was destroyed by Cestius in the wake of the Jewish revolt. In Roman times – a large Jewish city.

In the Roman times – Kavul was a large Jewish city close to Acre. It was burnt by Cestius in the wake of the Jewish revolt. In late Roman period an important Jewish village. Today the site is in ruins, and a new Arab village of Kabul is located nearby. A ruined village of Damun, east of Kabul,  is located over a Roman period site.

The ancient city is strategically  located close to the north-south Via-Maris road.

The ruins of Damun is located on a hill, about 0.5KM from the junction, and is adjacent to the modern road to the Kabul village. An aerial map is seen below. 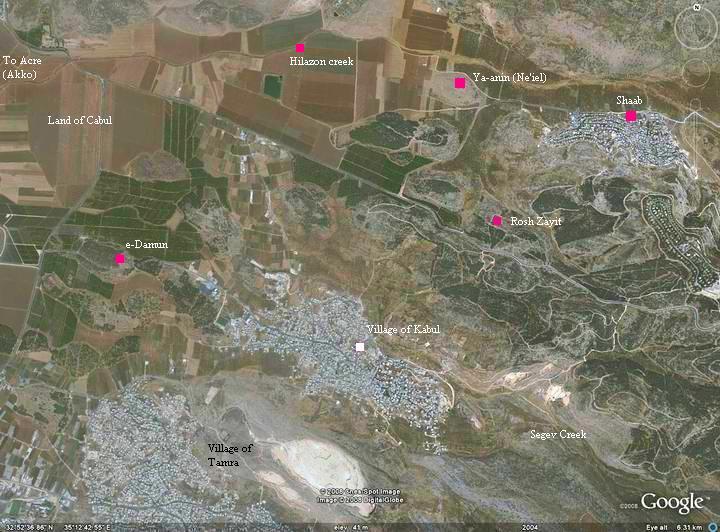 The ancient city was mentioned in several biblical texts (see references below): it was part of tribe of Asher (Joshua), but was later given by king Solomon to Hiram King of Tyre as exchange for his assistance in building the temple (Kings).

The Biblical site is not positively identified, and is not in the village of Kabul where the earliest findings were Hellenistic. Therefore, other sites were suggested. According to some scholars and recent excavations it may be located in Khirbet Rosh-Zayit, which is located nearby.  The site was established during the period of the Kings (start of 11th century BC), and destroyed in the 8th century BC. It relocated during the Hellenistic period to a site closer to the modern village of Kavul.

In the Roman times the city was burnt by Cestius Gallus, the Governor of the Roman province of Syria,  during his attempt to crush of the Jewish revolt (66 AD). He was later defeated in Beit Horon so he was eventually punished for his cruel acts in Israel. According to Josephus, Kavul was regarded as a beautiful city, and named “the city of men”.

The city was later restored and was an important Jewish village in the Roman period (2nd-4th century AD). The Schenia Cohenic family, a distinguished family that used to serve the Temple (as referenced in Chronicles I 24:11 “… the tenth to Shecaniah”), settled here – an indication of its importance.

The city was destroyed, as most of the villages in the Galilee,  at the Persian/Arab conquest (6/7 century AD).

In the Middle Ages, Kabul was a small agriculture village. Later, in the 16th century , there were several Jewish families in the village.

Today, a large Arabic village, Kabul,  is located on top of the ancient site. Inside the village there are tombs and other findings from the Roman period.

Another Arab village, et-Damun, was established in the 18th century on a hill west of Kavul, closer to the north-south trade road. The site was a Roman period village and perhaps earlier periods. The Arab village was  destroyed in 1948 and is in ruins since then.

The site of et-Damun is located on a low hill, about 10M above the plains, and close to the north-south road. The hill is covered with the ruins of an Arab village, which may have been built over Roman/Byzantine period levels and perhaps earlier levels. Some scholars even identify Damun as Biblical Dimnah (Joshua 21 34-35) since the names are similar.

Most of the site was covered by low trees and brushes. After a fire in 2006 the hill is mostly barren. The south side of the site is chopped away by the extension of the road to Kabul. 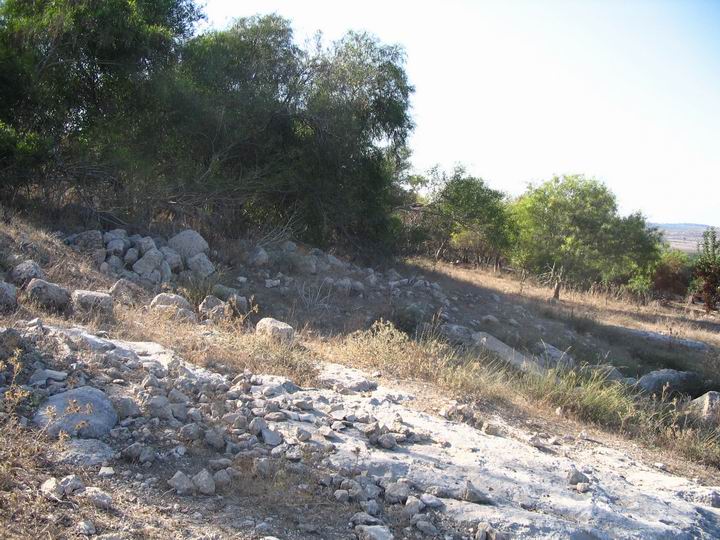 A view of the center of the hill is seen below, after the fire cleaned away the trees and bushes. The village was leveled in 1948 and it remained in ruins since then. 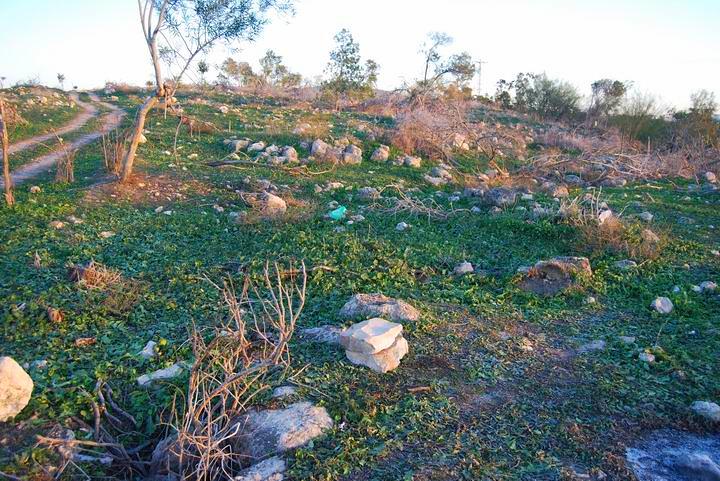 On the south-west side of the village are the ruins of  a large mosque.  It was designed around 1800 by the same Egyptian architect of the Acre’s Al-Jazzar mosque, and was very similar in size and design. That architect is buried in the grounds of the mosque, but the grave is unmarked. In the photo below the 71 year old native of Damun, Boshkar Yoseph Mohammed, is standing near the southern entrance to the mosque. He lives today in Kabul, 2Km to the east.

According to Mohammed, the size of the mosque (6 Dunam) was used as a “yardstick” unit (called “the rope”) throughout the Galilee for measuring the standard size of parcels of land. 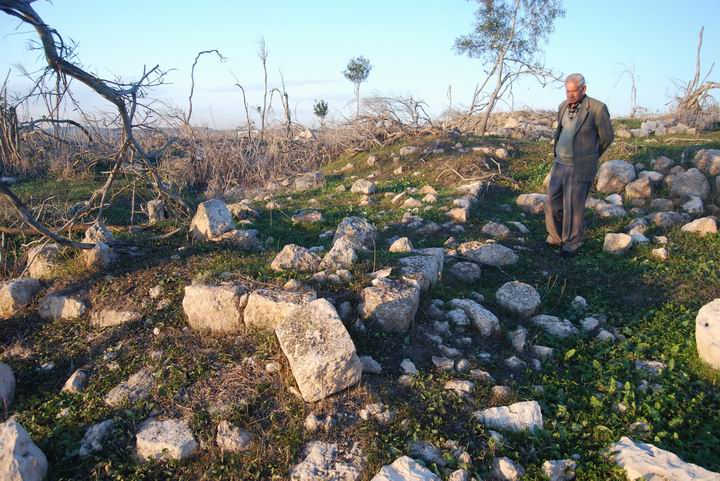 On the east side of the ruins there is a large cemetery of several dozen graves. In the photo below – a view of the graves, and the hills above the valley of Khilazon. 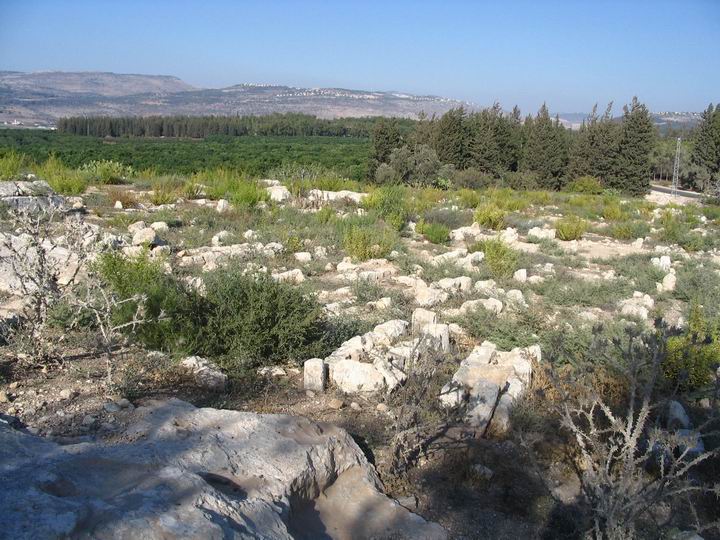 The photo below shows an ancient game that was carved into the rock. It consists of 8 x 8 round holes, similar to Chinese checkers. The players used stones in different colors to play in this game.

This rock is located at the eastern side of Damun, north of the cemetery. On the same rock there are 2 such games. 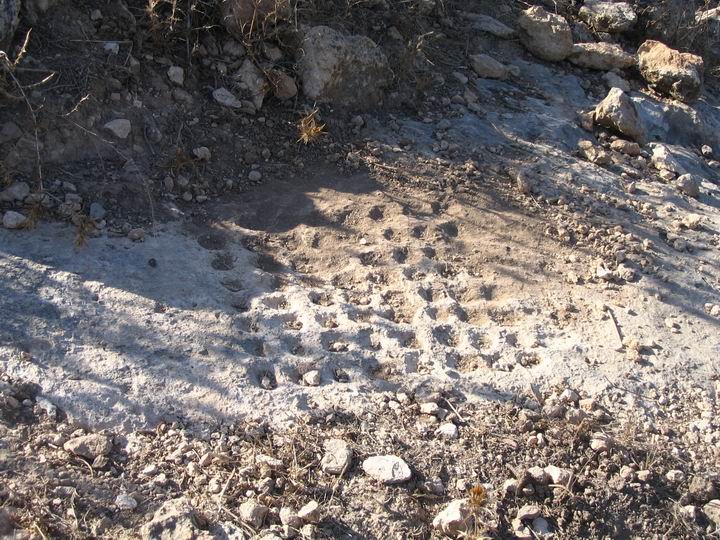 Another stone, which was a base for a game, is located near the ruins of the large mosque, located on the south-west side of Damun. According to Mohammad Boshkar, who lived here as a child, the game was played before and after the prayers. 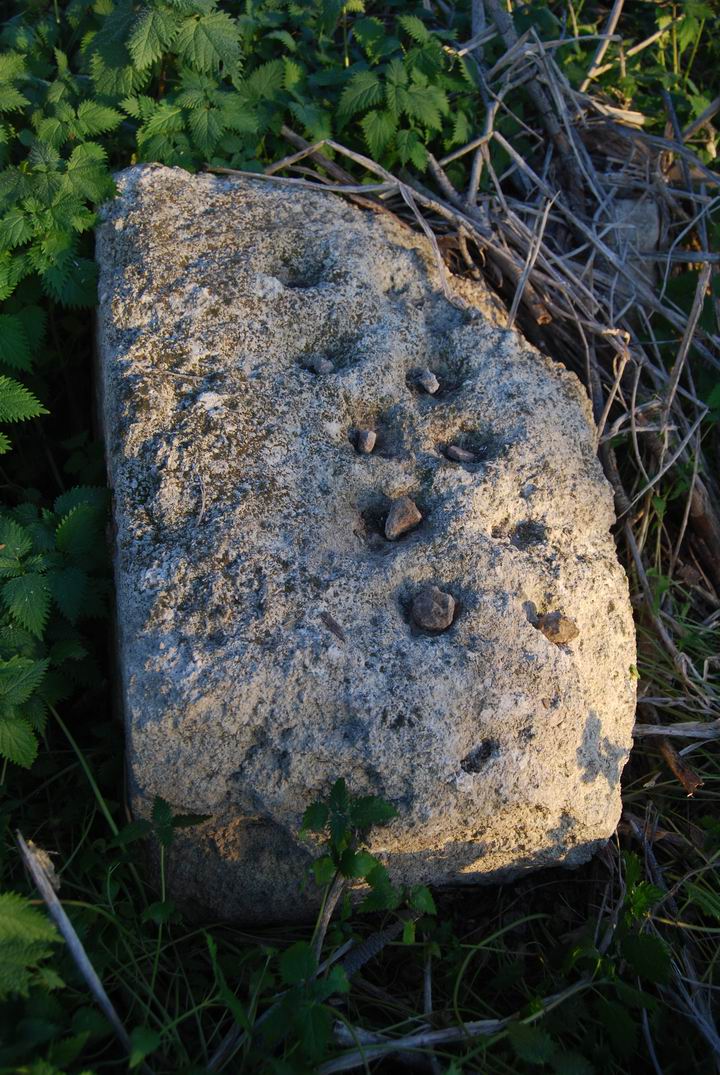 On the west side of Damun, near the entrance road to Kabul, is a deep well, which was one of the sources of the water for the village of Damun. It was constructed around 1800 in order to resolve the water supply for the growing village. 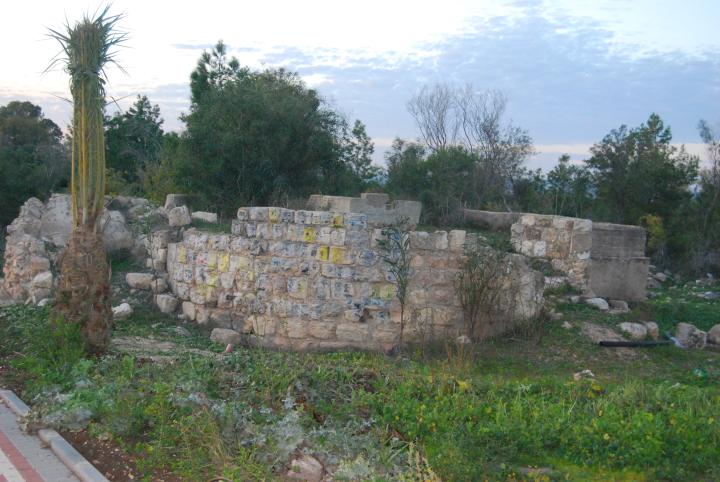 The water was raised by buckets to a small pool, then flowed into a water trough. Here the animals would drink the water, and the water was also hand carried to the village. 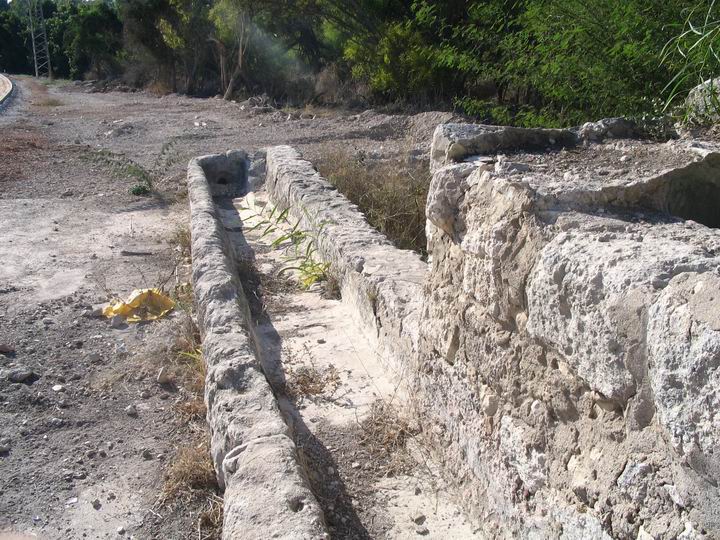 The roof of the well is seen below. Several steps were used to lead a mule or donkey up to the roof, where the animal was used to pump the water. 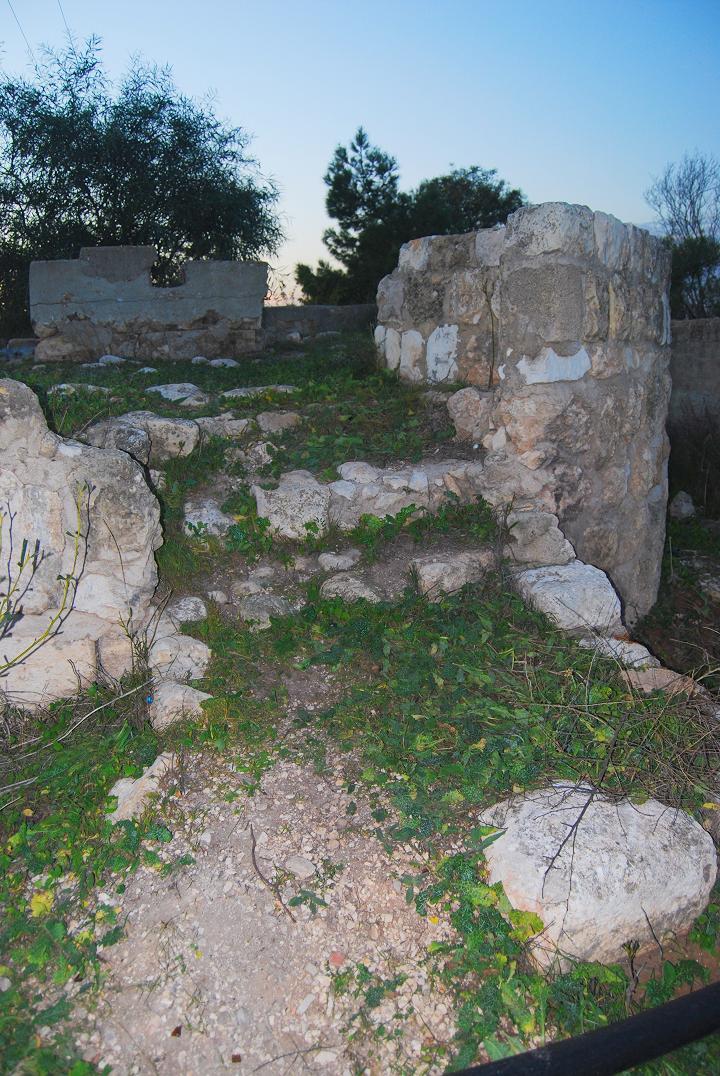 The  mule or donkey encircles the center, turning a vertical pole. This moved a vertical chain which carried a number of buckets, fetching the water from the well up to the water channel. 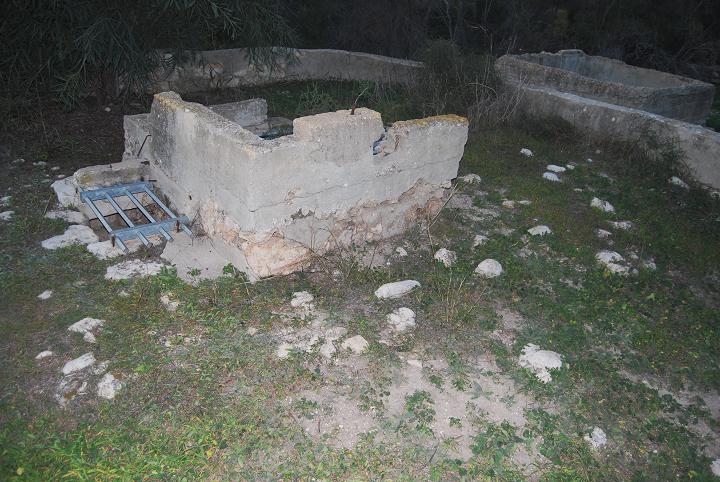 In 1943 an oil press and wheat mill was constructed on the north side of the well, belonging to Enkula El Khaik. The photo below shows the basin where the oil was collected after bring crushed with a machine. 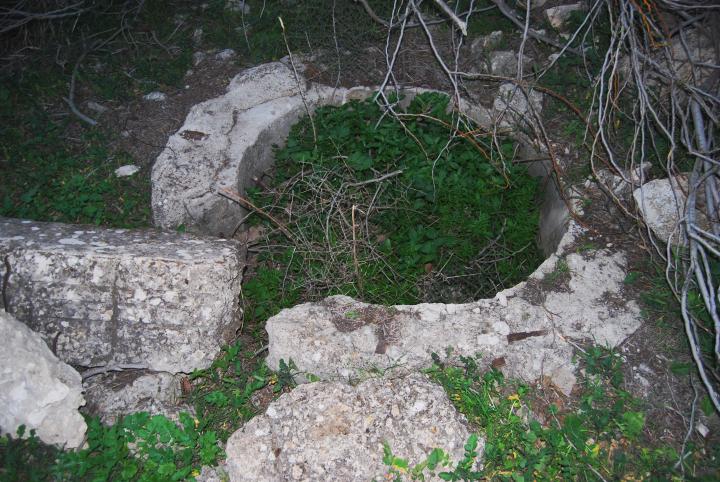 There are plans to reconstruct the well and its surroundings, creating a small park. According to Mohammed, funds were already raised for this project.

This text tells about the boundaries of the Asher tribe, which included the city of Cabul.

“And the fifth lot came out for the tribe of the children of Asher according to their families.

And their border was … And it turned toward the sunrising to Beth-dagon, and reached to Zebulun and to the valley of Iphtahel northward at Beth-emek and Neiel; and it went out to Cabul on the left hand”,

“now Hiram the king of Tyre had furnished Solomon with cedar-trees and cypress-trees, and with gold, according to all his desire–that then king Solomon gave Hiram twenty cities in the land of Galilee.  And Hiram came out from Tyre to see the cities which Solomon had given him: and they pleased him not. And he said: ‘What cities are these which thou hast given me, my brother?’ And they were called the land of Cabul, unto this day”.

This text describes the cities of the Levites, who settled among the other tribes. In the tribe of Zebulun a place called “Dimnah” may have referred to the village later called Damun.

This text tells about the beginning of the conquest of the Romans during the Jewish revolt, and refers to Cabul (written here as Zabulon):

“…so Cestius took part of his forces, and marched hastily to Zabulon, a strong city of Galilee, which was called the City of Men, and divides the country of Ptolemais from our nation; this he found deserted by its men, the multitude having fled to the mountains, but full of all sorts of good things; those he gave leave to the soldiers to plunder, and set fire to the city, although it was of admirable beauty, and had its houses built like those in Tyre, and Sidon, and Berytus. ”

In this text is a location of the site (Zabulon, which is another form of Cabul):

“Now Phoenicia and Syria encompass about the Galilees, which are two, and called the Upper Galilee and the Lower. They are bounded toward the sun-setting, with the borders of the territory belonging to Ptolemais, and by Carmel; … As for that Galilee which is called the Lower, it, extends in length from Tiberias to Zabulon, and of the maritime places Ptolemais is its neighbor”.

Where was the location Biblical Cabul?

The modern village of Kabul preserved the ancient name of Kavul, and therefore there is a high probability that the Biblical site may be found in its vicinity. However, there are no Iron age sites inside the village.

There are other possible candidates at the nearby sites  which have a Iron age level (see map above):