Ruins of an ancient fortified village, located on a steep cliff near Bat-Ayin in the Gush-Etzion area of Judea. Its Arabic name means: Skull, as the cliff, its cave holes and the hills around it resemble a human skull and rib bones.   The village was inhabited mainly during the second temple and the Byzantine periods.

Khirbet Jumjum is located on a cliff, at an altitude of 737m.  The ruins cover a total area of 10 dunams (2.5 acres), mostly on the summit and some on the ridge east of the cliff. 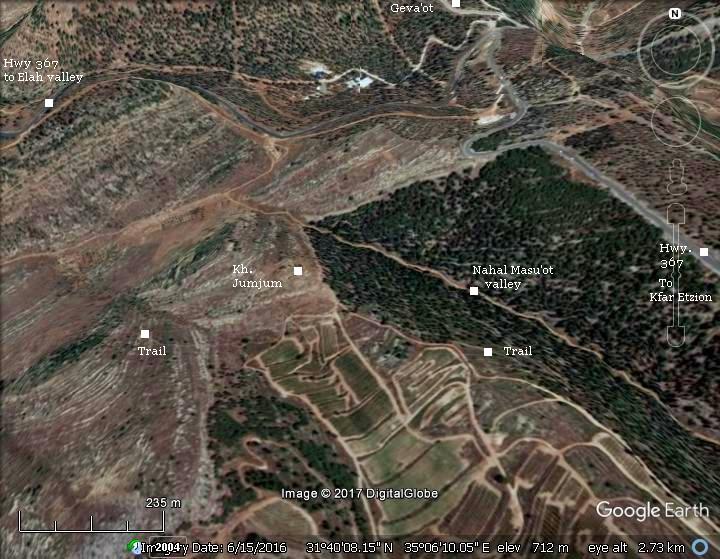 The site was surveyed by B. Zisso and D. Amit in the 1990s. They dated the two main periods of the site to the Second Temple period and the Byzantine period. Two excavation seasons (2005, 2008) unearthed the structures and installations of both periods.  The archaeologists concluded that the village was established as a Jewish village during the Hasmonean period, and existed until the Byzantine period, with a gap following the Bar Kokhba revolt.

Evidence of hiding complexes and fortifications imply that the village was one of the Jewish fortified villages that were destroyed during the Bar Kokhba revolt (132-135 AD).     Cassius Dio, the historian of Rome, wrote about the devastation of Judea (Roman History, LXIX 13):

In general, the destroyed Judean villages were resettled during the Late Roman and Byzantine periods by Christians.  Jews were forbidden to return to all settlements in the vicinity of Jerusalem. Eusebius of Caesarea wrote about this ban in the 4th century (Church History, Book IV, Ch. 6, 3): “…the whole nation was prohibited from this time on by a decree, and by the commands of Hadrian, from ever going up to the country about Jerusalem. For the emperor gave orders that they should not even see from a distance the land of their fathers..”.

A section of a ceramics kiln was unearthed on the ridge to the east of the cliff.

The second period of settlement was during the Byzantine period. Most of the structures on the hill are from this period.

During the Middle Ages, a lone structure was built above the ruins. One of the ruined structures (area ‘A’) was rebuilt during the Mameluke period and served as a farmhouse. Other sections on the hill were farmed.

The Jews returned to this area  in 1932, after Shmuel Yosef Holzman purchased lands of Gush Etzion. The first settlement – kibbutz Kfar Etzion – was established in 1935. It was named after Holzman, as the German word Holz means “wood” (Etz in Hebrew).

In 1945 another kibbutz, Masu’ot Itzhak (Hebrew: “Yitzhak’s beacons”) was established 1km SE of Kh. Jumjum.  Named after Yitzhak Herzog – who was the chief rabbi of Israel. It was captured and destroyed by the Jordanians in 1948. After some of its Jewish prisoners returned from their captive, they re-established a collective Moshav bearing the same name in the vicinity of Ashkelon.  The other three communities of Gush (cluster) Etzion returned back only after the 1967 war when Israel regained control over the West Bank. Since then the settlement expanded, and today there are 22 communities in Gush Etzion.

This aerial view shows the site from the north side.

The hill, on which the ancient village  was built, is part of the Judean hogbacks, a  geological formation west of Gush Etzion. The hogbacks are a series of hills with a narrow crest and steep slopes of equal inclination on both sides.  The crest is made of a layer of hard limestone and dolomite rock, while its sides are made of softer layer of  marl and clay. Over the 100 million years since the ancient sea has deposited these layers, the soft layers dissolved leaving the harder crest. 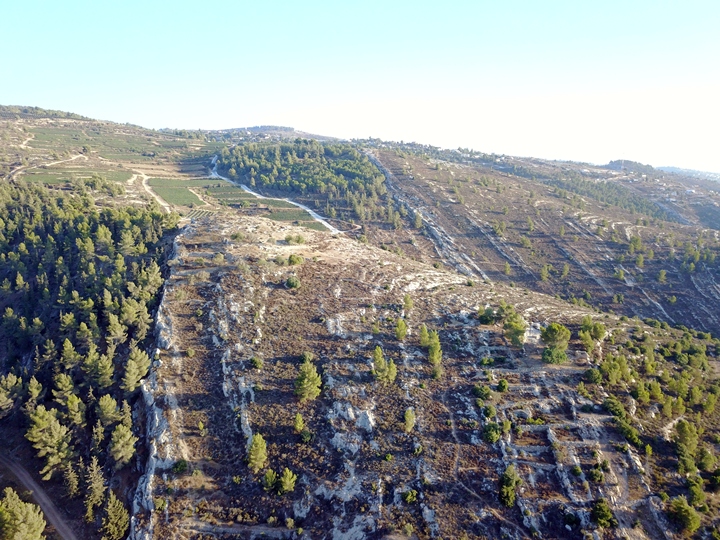 A closer view of the ruins are seen in the next aerial view, captured from the NW side. The hill is surrounded by deep valleys from the three sides: Nahal Masu’ot valley on the west and north sides, and another valley on the south west side. On the forth side – south east – the cliff provides a natural defense. 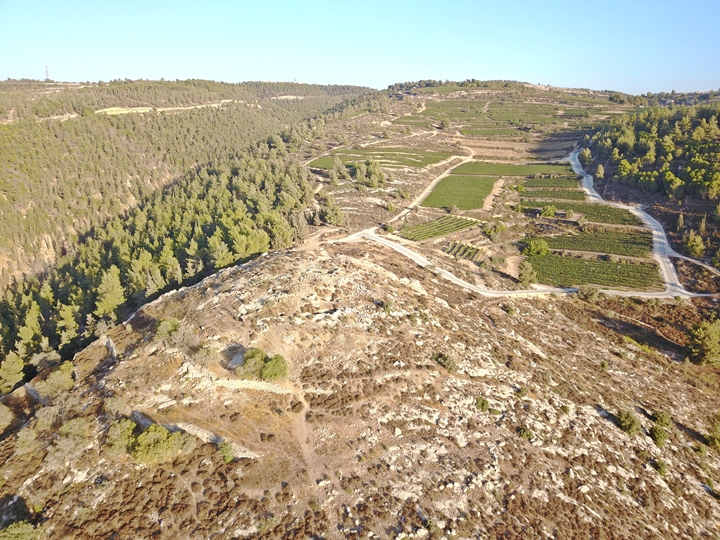 Switching sides to a south east view, the next aerial view shows the edge of the cliff. Notice the height difference from the top of the cliff to the ground on the less defendable south side. 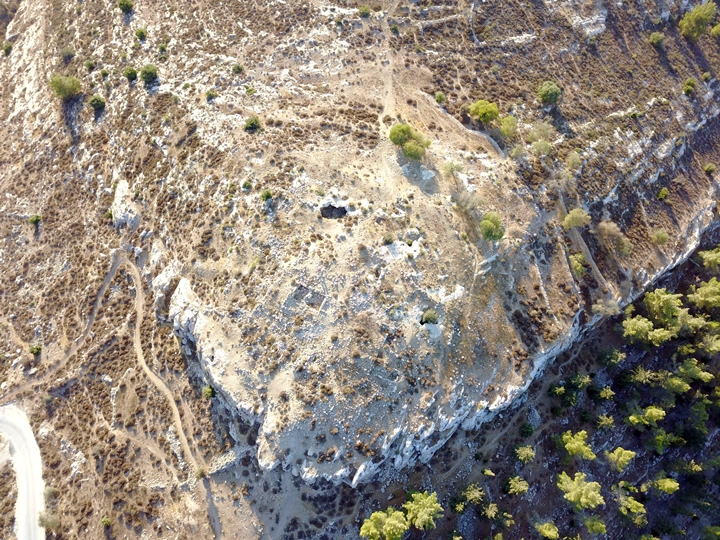 Ruined structures and an opening of a wide cave can be observed on the top of the hill.

The next view is closer to the structures. The ruins cover an area of 50m by 50m, and are mostly dated to the Byzantine period. On the north west side of the ruins are traces of a large public structure dated to the second temple period. 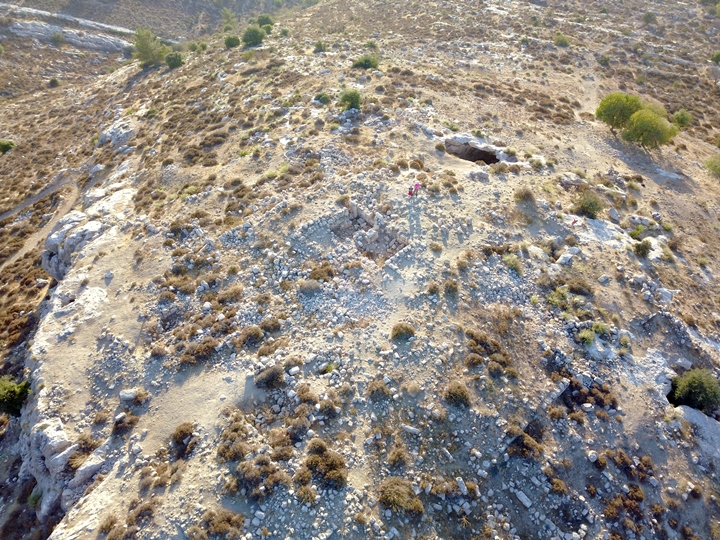 Yet a closer view of the ruins: 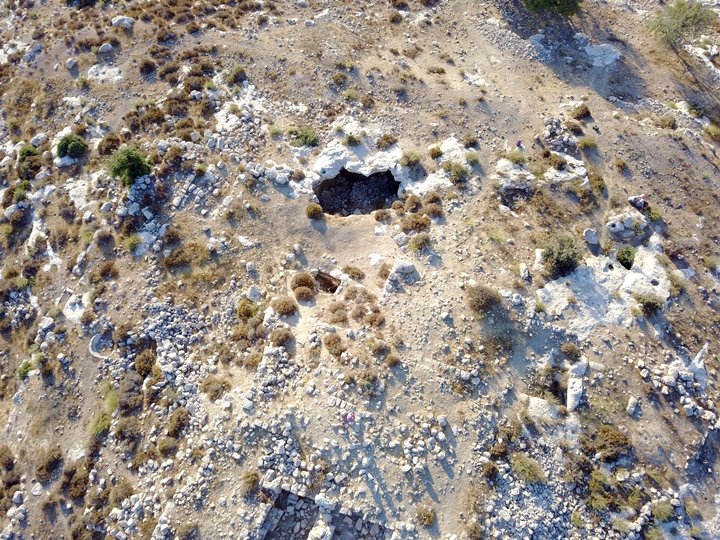 (b) Approach to the site

The south west side of the hill has a steep incline, rising 70m above this side and 100m above the west side. 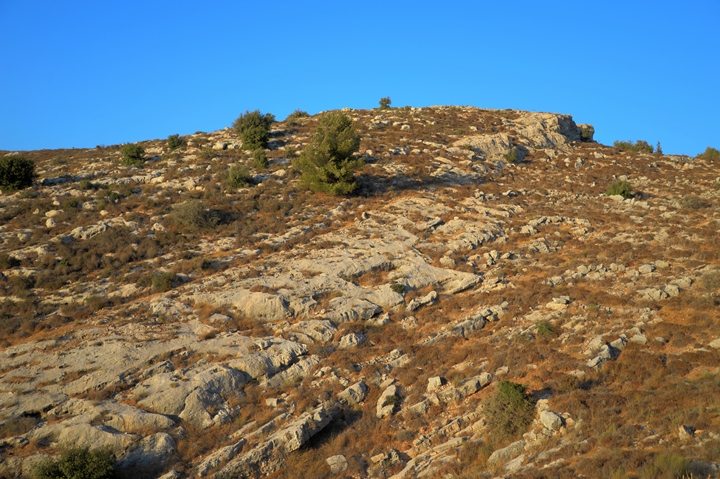 The entrance to the ancient village was from the east side. A vineyard was recently planted along the valley. 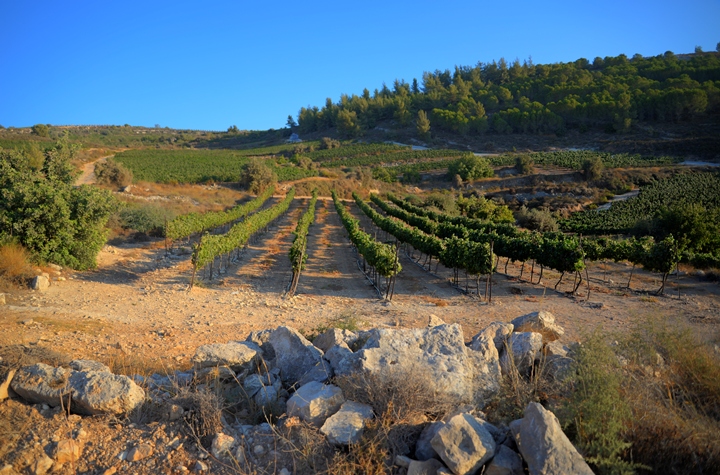 The next photo shows the eastern edge of the hill.

In this visit we joined Na’ama, a young guide from Kfar Etzion field school,  together with Matan and Yair and their grandmother. The field school conducts visits to the site as well as other interesting hikes in the area. They also partially sponsored the excavations of Kh. Jumjum. 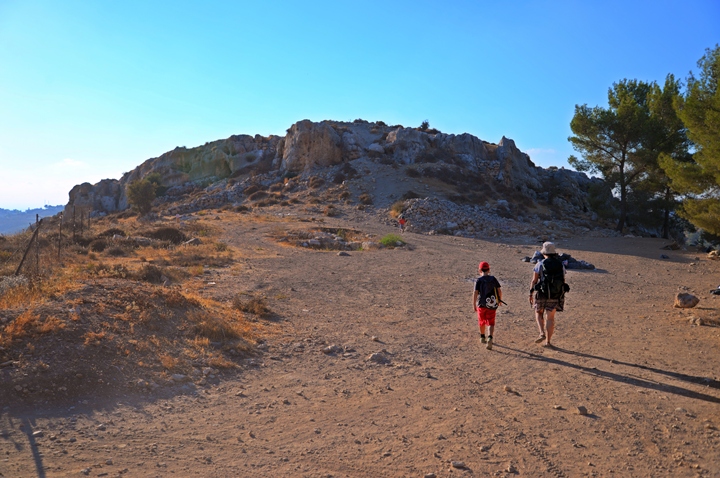 In the saddle before the cliff is an excavation area (area ‘E’), which was the only location the archaeologists examined outside of the hill area.  They unearthed a section of a 0.75m wide wall (‘W10’) dated to the 1st century AD. 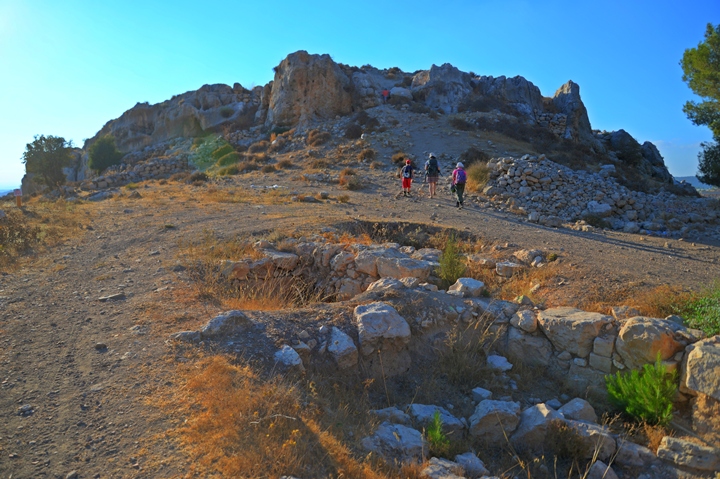 To the north of this wall they unearthed a ceramics kiln dated to the 3rd-4th century AD, and fragments of the ceramics that were produced there.  The majority of the pottery production was of storage jugs and bowls.

The justification of ceramics production in this area was the abundant source of the clay (the Motza marl stone was a preferred ingredient), the winds and wood that fueled the kiln’s fire, and the water fetched from the local cisterns. 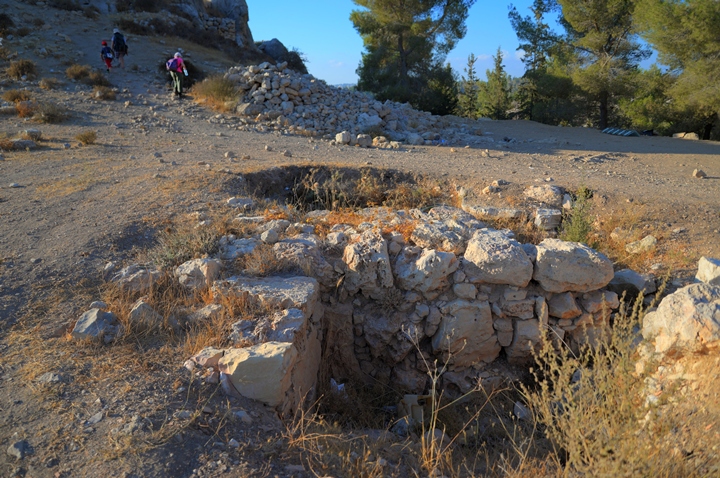 (c) On the summit

Most of the structures are located on the summit, and date to the Early Roman and Byzantine periods. The ruins cover an area of 7 dunams. 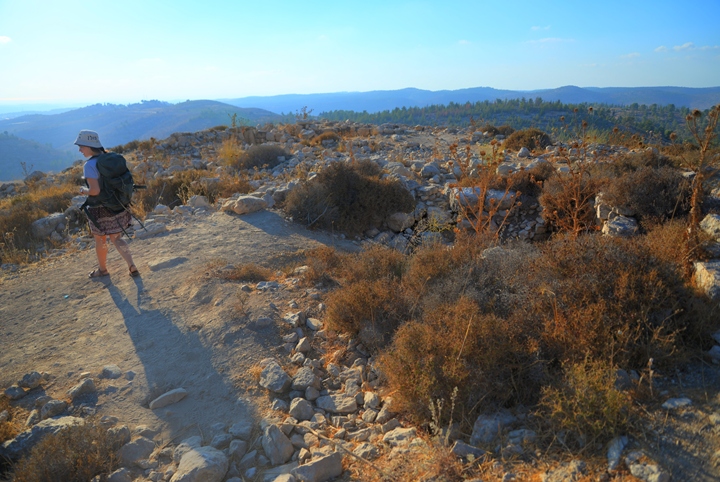 A  structure was unearthed in the center of the ruins, designated as area ‘A’. It was dated to the Mamluke period, built above a pair of earlier walls. It is the only structure of this period on the hill.

This photo shows the structure from the north side. The structure area is 8.5m long by 8m wide. It is composed of two rooms, and was covered by a double curved stone roof. 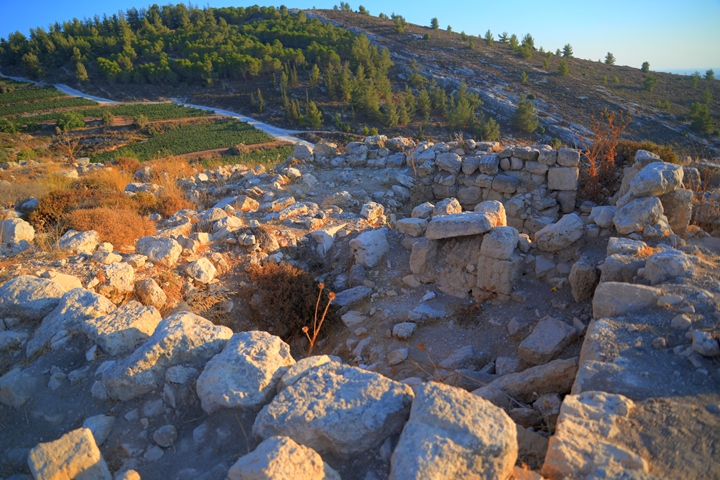 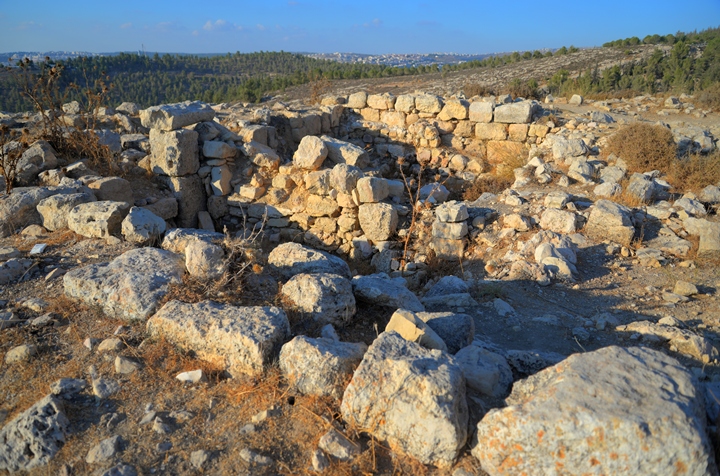 Under the 2 room Mamluke structure, and stretching to the north,  is an underground complex. It was covered when the structure was built, concealing the entrance on the south side.  The illustrated photo shows a rough sketch of the underground area (in turquoise dashed line) . 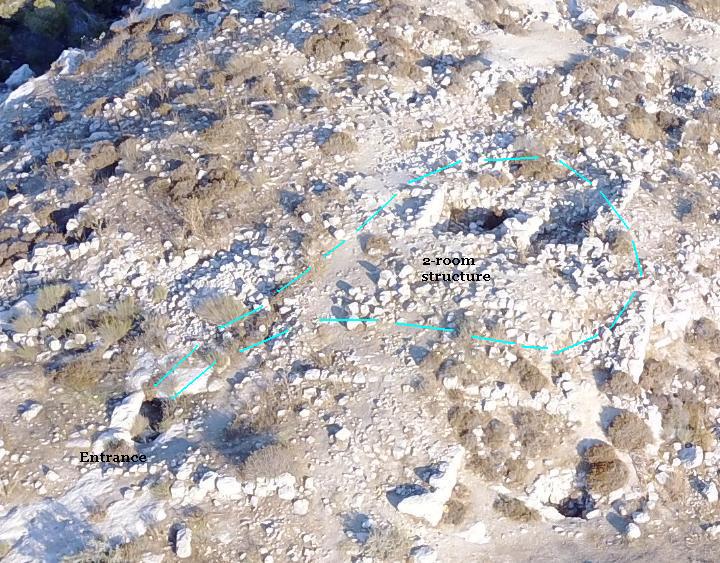 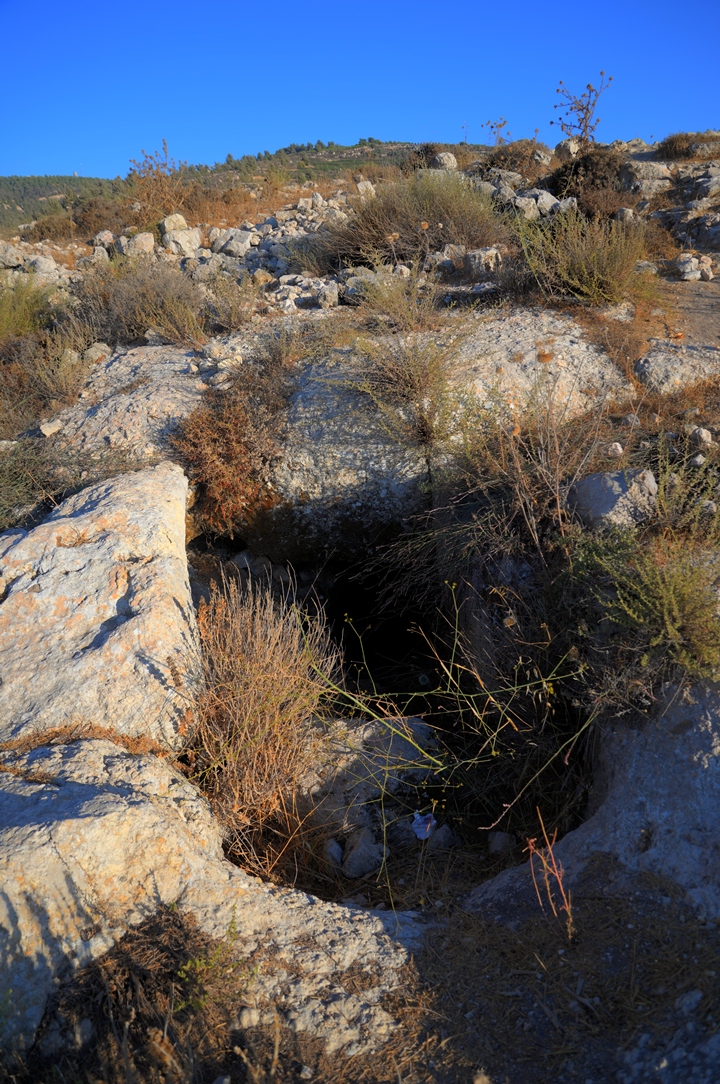 The complex may have served as a storage area, or functioned as a residential place.

To the north of the village structures is a large opening – a collapsed water cistern. Its plan was rectangular, oriented towards the north west (hidden on the left side). Remains of white sealing plaster are seen on its walls.

Two other large rectangular reservoirs are cut on the north foothills. These reservoirs were the main water supply for the fortified village. 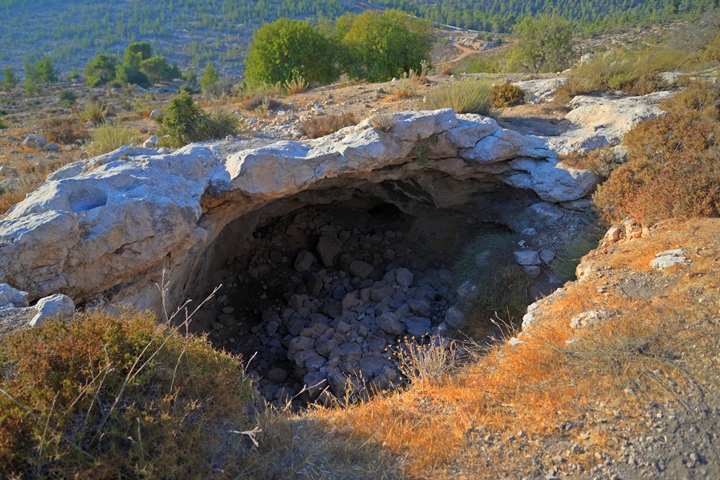 There are other smaller cisterns located on the hill, as well as a columbarium on the north foothills. 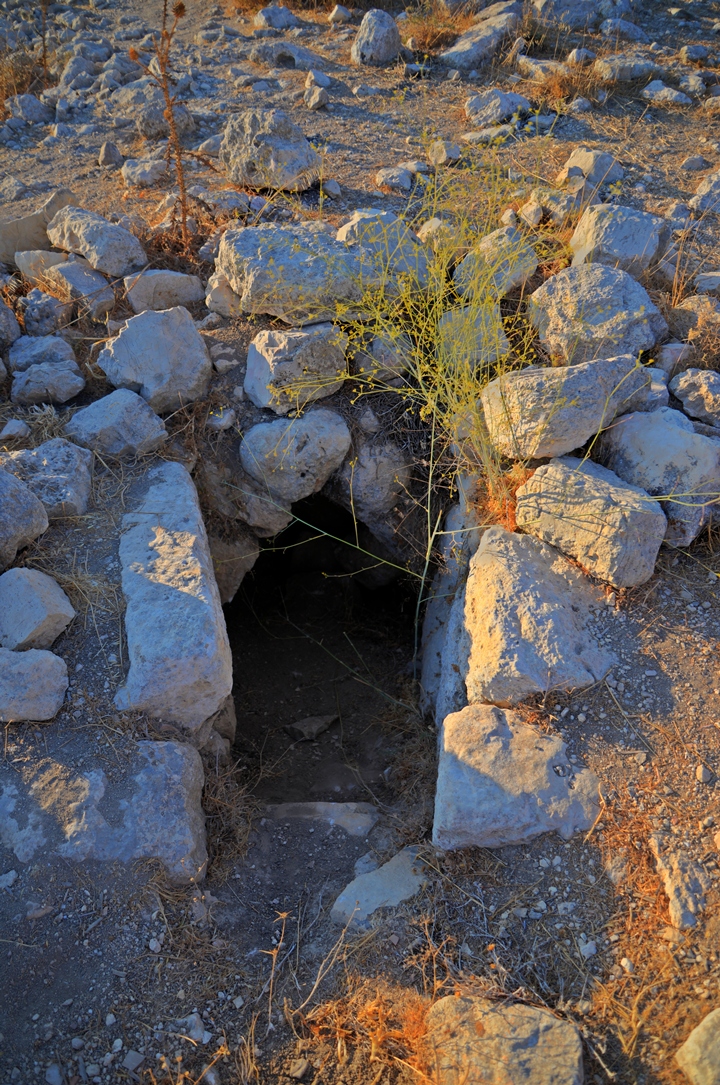 Near the large cistern is an entrance to a Jewish ritual bath (Mikveh). 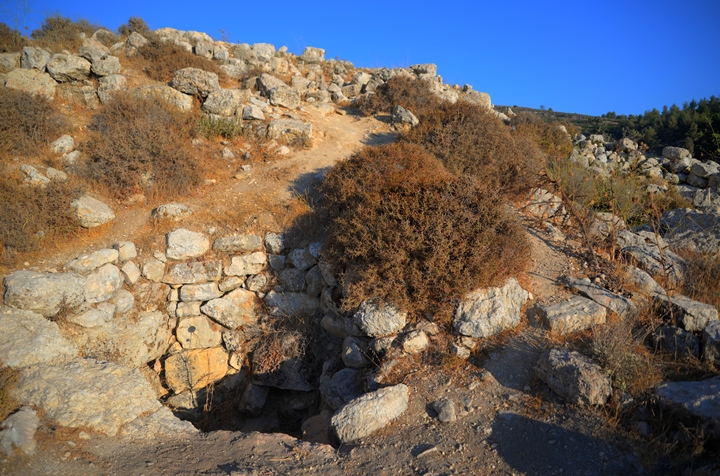 From the opening leads a 1.5m long 1.0m wide corridor towards the north. 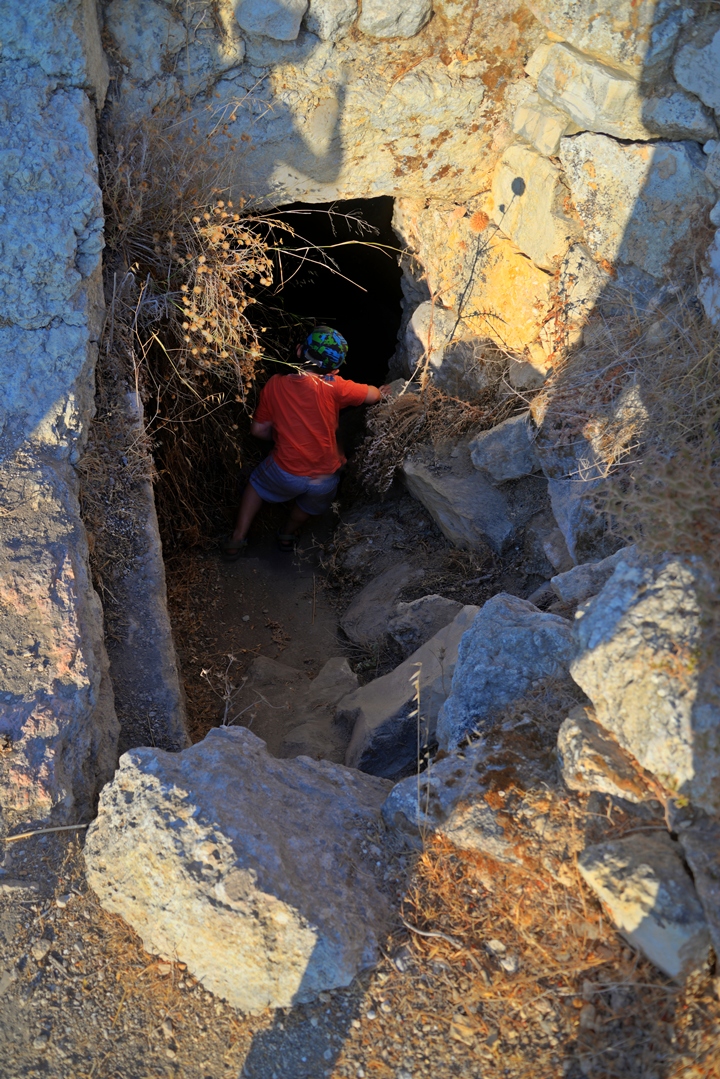 A 2m long, 1m wide step is located at the entrance to the pool. 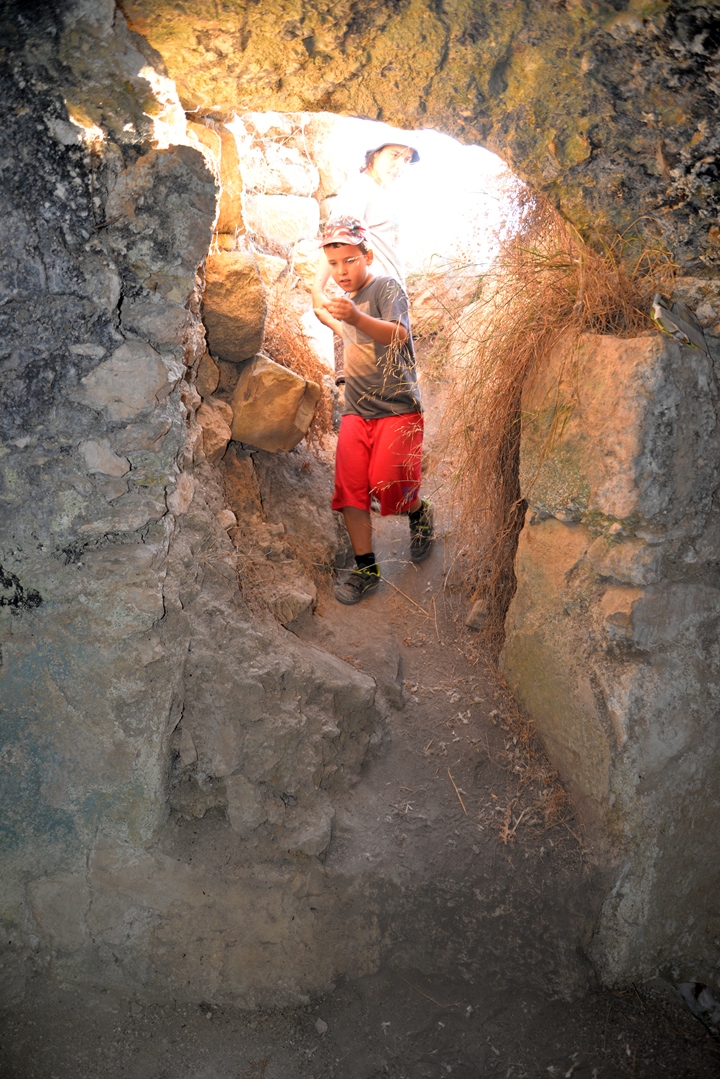 The chamber is 3m by 2m, 2m high. Its walls were covered by a white plaster in order to seal the walls.

Over the years the chamber became a garbage pit. In the rubble the archaeologists unearthed 20 ceramic fragments dated to the 1st century BC until the 4th century AD. 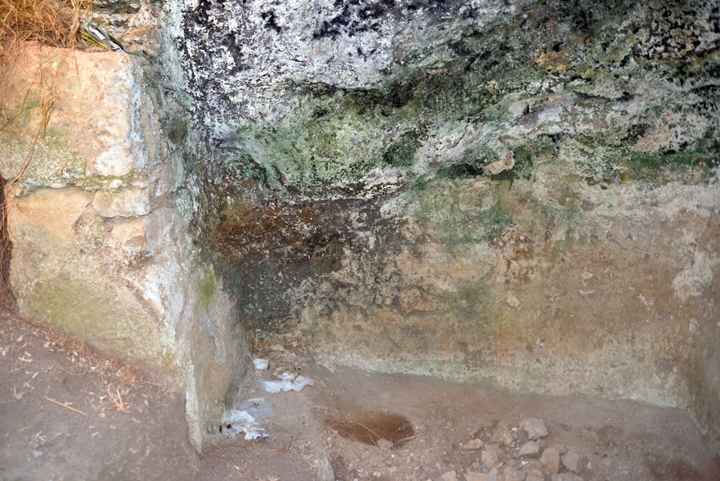 On the southern edge of the cliff, seen below, is a small Mikveh (Jewish ritual bath). It has a diameter of 1.8m and depth of 1m. A narrow staircase, with 5 steps on its south side, leads down to the bottom. On the surface is a groove that conveyed the rain water into the hole. 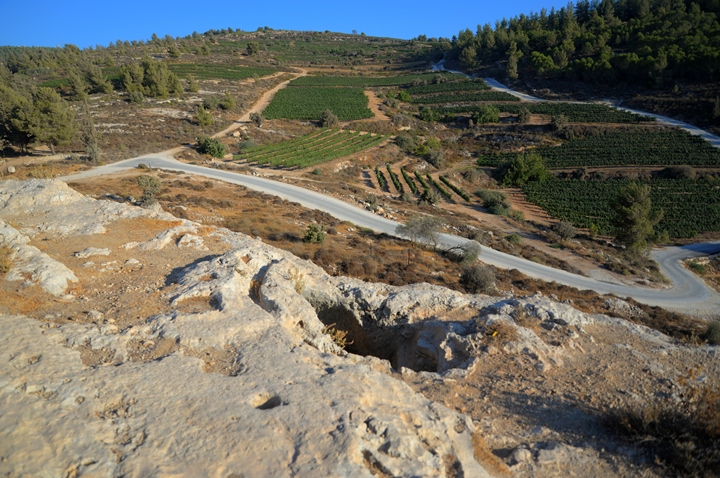 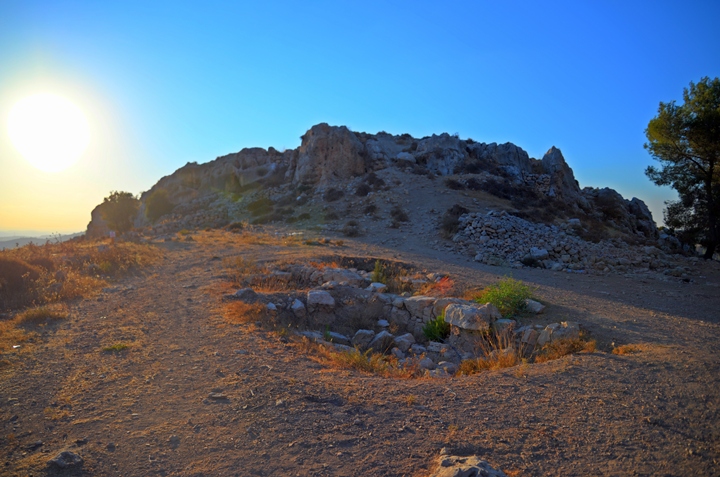 BibleWalks.com – dreaming in the Bible Lands