Itamar is an Israeli community in Samaria, located on the hills  south east of Shechem.

Itamar (Ithamar) is an Israeli community in Samaria, located on the hills  south east of Shechem.  Established in 1984, its residents are predominately Orthodox Jews. To the east of the village are a number of agriculture farms and outposts.

Itamar is located 5KM southeast of Shechem (Nablus), and covers an area of 7 KM long and 1-2 Kilometers wide . It is situated on a long ridge between two east-west valleys – Valley of  Beit Dagan (Beit Dejan) or Salem (Salim), and valley of Nahal Yinon (Yanun; Wadi el Abeid).  The core of the community of Itamar is located on the west side, while the farms and suburbs occupy the hills on its east side.

Itamar is under full Israeli control (aka, “C” zone), and therefore can be accessed by Israelis. 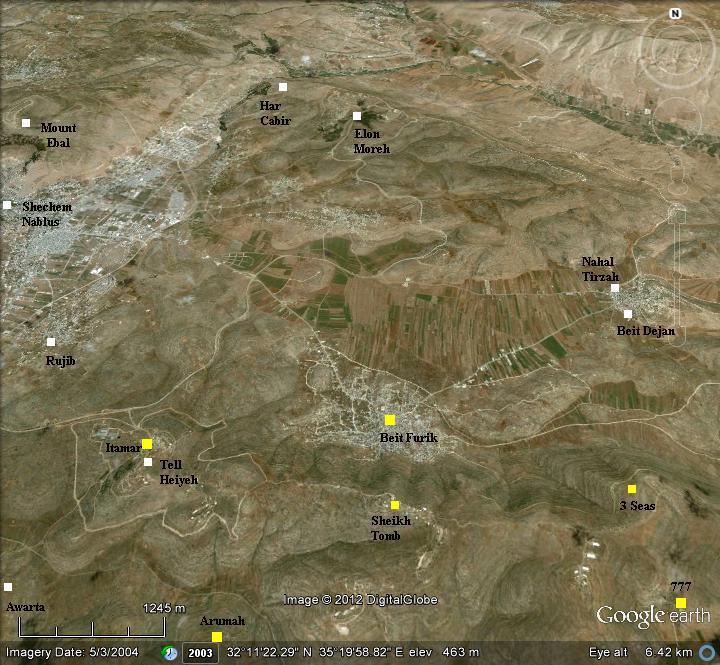 The community was named after Ithamar this youngest son of Aaron the priest, the older brother of Moses. According to traditions, both Jewish and Samaritan, he is buried with members of his family of priests, including his brother Eleazer. These tombs are located in the vicinity of the village of Awertah  (a place called El Azeirat, 500m east of the village).

There were several ancient roads in and around Itamar, including three major Roman roads from Shechem (Neapolis).

These ancient roads were marked by the PEF survey (map below). 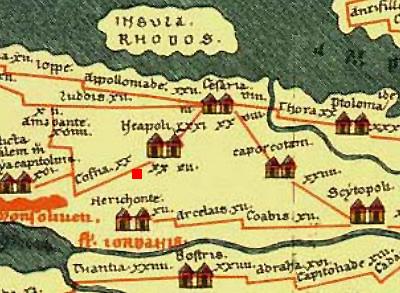 The Peutinger Map (Tabula Peutingeriana) is a medieval map which was based on a 4th century Roman military road map. It is oriented west-east. Shechem appears as “Neapolis” in the center, with a road thru Gofna 20 Roman miles south, to Jerusalem 16 miles south (the double-house icon on the left, titled “Helya Capitolina formely Herusalem”).

Conder and Kitchener surveyed this area during the Survey of Western Palestine in 1882. The location of Itamar is the center of this section of the map, from Kh. Heiyeh to the right side. 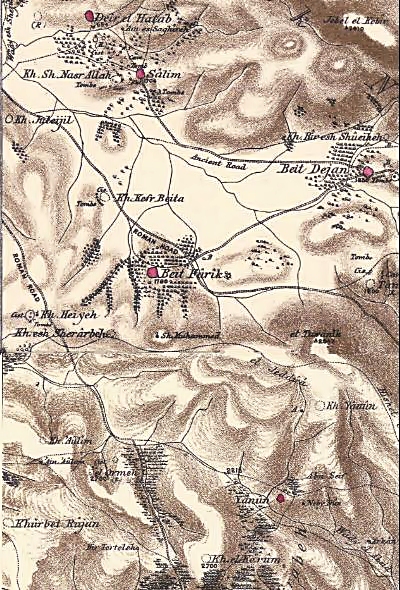 Part of map Sheets12 and 15  of Survey of Western Palestine,

“Beit Furik – A small village in a nook of the hills near the plain of Salim. It has a well to the east. This is perhaps the place called Ferka in the Talmud, which appears to have been in Samaria. It is also noticed in the ‘ Samaritan Chronicle.’

Beit Dejan – “A small village, evidently an ancient site, with rock-cut tombs and wells to the east. It stands at the eastern end of the plain which runs below Salim. This place, like the last, is surrounded with olive-trees ; it is, perhaps, the Dagon of the ‘Samaritan Chronicle’ inhabited in the seventh century by the Samaritans.

Salim – A small village, resembling the rest, but evidently ancient, having rock-cut tombs, cisterns, and a tank. Olive-trees surround it ; on the north are two springs about 3/4 mile from the village. This place is perhaps the Caphar Shalem of the Talmud, which was near En Kushi.

In the ‘Samaritan Chronicle’ it is called ‘Salem the Great’, and the Samaritans understand this to be mentioned in Genesis 33 18.  Salim is also possibly the Caphar Salama of 1 Maccabee 7 31, which seems to have been in Samaria.

Near this village are traces of ruins, cisterns, a ruined tank, and a cemetery of rock-cut tombs”.

A pioneering group (“Garin Elon Moreh”), led by Menachem Felix and Benny Katzover,  attempted to settle in the area of Shechem during the 1970s. After 8 futile attempts, the group tried in 1975 to settle in the area of Sebastia – in the old rail station near the ruins of the ancient city of Shomron (Samaria). They were forced out of the site, but allowed to stay in the army camp of Kadum, south of Sebastia.

In 1977 the new right-wing government of Menachem Begin changed the policy, and allowed the group to settle in the hills near Rujib (1979). However, the supreme court forced the group to resettle again -this time (1980) to Mount Kabir – the present location of the community of Elon Moreh.

Itamar:   In 1984 the community of Itamar was established near the original location of 1979 in the hills of Rujib. It was founded by several families from Jerusalem, with assistance of the settlement organization ‘Amana’. This community was initially called “Tel-Chaim”, named after Chaim Landau (Israeli independence fighter and Minister of Transportation; 1916-1981). Tel-Chaim also preserves the name of the ruins of Khirbet Heiyeh,  a Roman period site located on the west side of the community. The place was then renamed “Itamar” – the name of the youngest son of Aaron (Exodus 6 23): “And Aaron took him Elisheba, daughter of Amminadab, sister of Naashon, to wife; and she bare him Nadab, and Abihu, Eleazar, and Ithamar”.

The community expanded over the years covering a large area of 8 km2.   Itamar residents were subjected to numerous murderous attacks by their Arab neighbors, inside and outside the community. The most barbarous massacres occurred in 2002 in the house of the Shabo family (5 dead), and in 2011 when 5 members of the Fogel family were butchered in their beds by two villagers from neighboring Awarta.

Itamar and its outposts are located near the city of Shechem (Nablus). This view, from the top of Mount Gerizim, shows a number of key places along the ridge. The center of the community is located on the west side, situated near the ruins of an ancient site (Kh. Heiyeh). To the east, on a high hill top, is a Sheikh tomb. Further east is the  3-seas observation point. Itamar is surrounded by 3 Arab villages – Rujib, Beit Furik and Awarta. 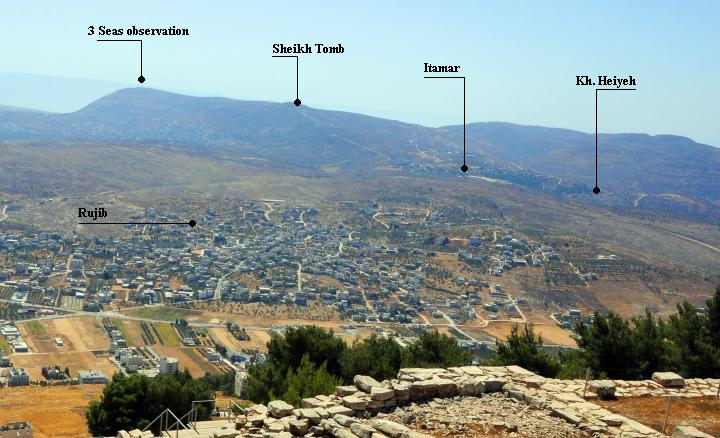 On the south side of the ridge is the valley of Yinon (Yanun). The major attraction here is the ancient site of Horvat Arumah. Along the valley was once a Roman road that connected Shechem, through Akrabah, to Jericho. 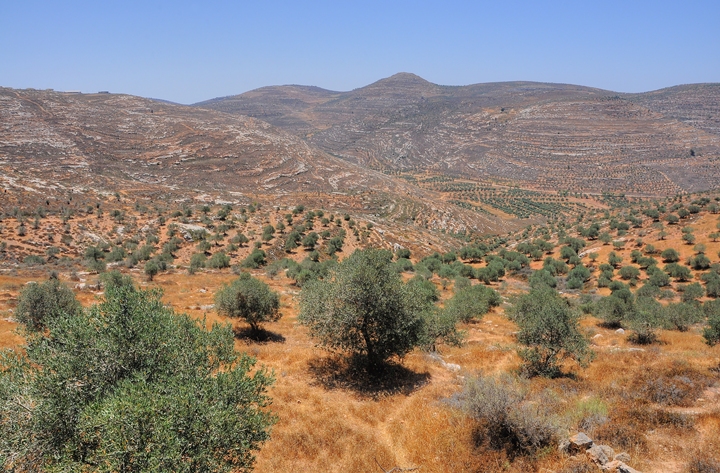 Arumah was a Canaanite and Israelite city, situated along an ancient route. The ruins of a Hasmonean fortress is located on its top. Its location was preserved in its Arabic name – Kh. el ‘Ormeh – as seen on the PEF map. The site is seen in the next picture – a round hill towering over the valley. The ancient route from Shechem, southwards towards Akrabah and Jericho, passed through the valley and then around the left side of this fortified city.

Arumah is mentioned in the Bible, as the refugee place of Abimelech during the times of the judges (~12th century BC). He was the  bastard son of the Judge Gideon, who set to establish the first Israelite Kingdom in the area of Shechem. His first act was to kill all but one of the 70 sons of Gideon, who had many wives.  His brother Jotham warned against this attempt of his murderous brother Abimelech, and used a famous proverb (Judges 9:8-9):

“And when they told it to Jotham, he went and stood in the top of mount Gerizim, and lifted up his voice, and cried, and said unto them, Hearken unto me, ye men of Shechem, that God may hearken unto you. The trees went forth on a time to anoint a king over them; and they said unto the olive tree, Reign thou over us…”.

Abimelech was a king over Israel for 3 years in Shechem, but then a mutiny broke out and he was forced to flee to the city of Arumah  (Judges 9:41): “And Abimelech dwelt at Arumah: and Zebul thrust out Gaal and his brethren, that they should not dwell in Shechem”. He later was killed by the mutineers in Thebez (Tubas?). 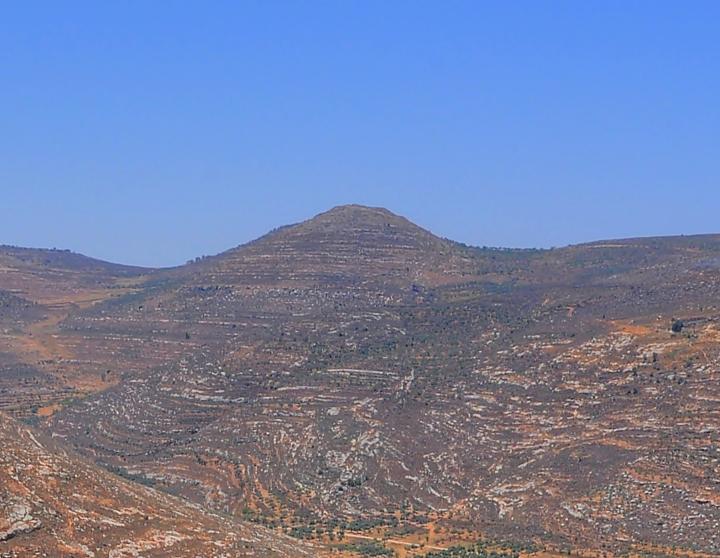 A panoramic view, as seen from upper Itamar with a view towards the south, is shown in the following picture. If you press on it, a panoramic viewer will pop up. Using this flash-based panoramic viewer,  you can move around and zoom in and out, and view the site in full screen mode.

A Sheikh’s tomb is located 2 KM east of the center of Itamar, on a high hill overlooking the village of Beit Fukir. This hill is seen in this picture, taken from the east side. Around the site are farms and residential houses of the settlers, and expansion of Itamar. In the background is Mount Ebal on the right and Mount Gerizim on the left sides. 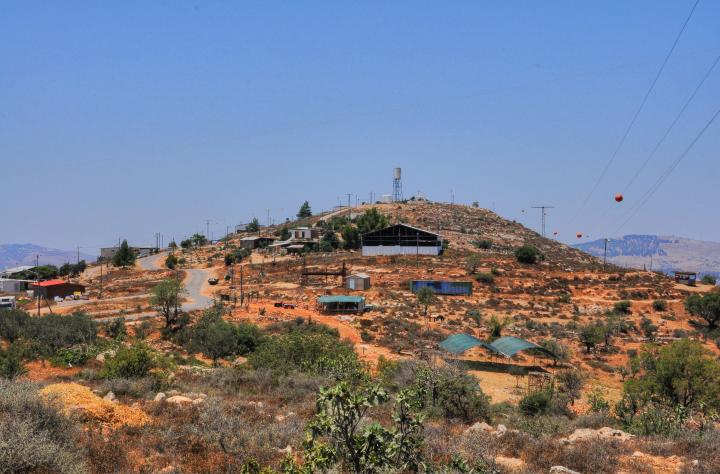 The tomb is named after Sheikh Muhammed.  Its location on the top of the hill overlooking the area is typical of similar tombs, such as the one on Har Kabir near Elon Moreh.

According to some traditions, this is the tomb of the Biblical judge Gideon, the father of Abimelech. According to the Bible (Judges 8:32): “And Gideon the son of Joash died in a good old age, and was buried in the sepulchre of Joash his father, in Ophrah of the Abiezrites”. Note that the burial place of Ophrah Avi-Haezri, which is where Gideon built an altar (Judges 6 24), is identified by most scholars in another place, so this tradition is not based on facts, but how can we argue with traditions? 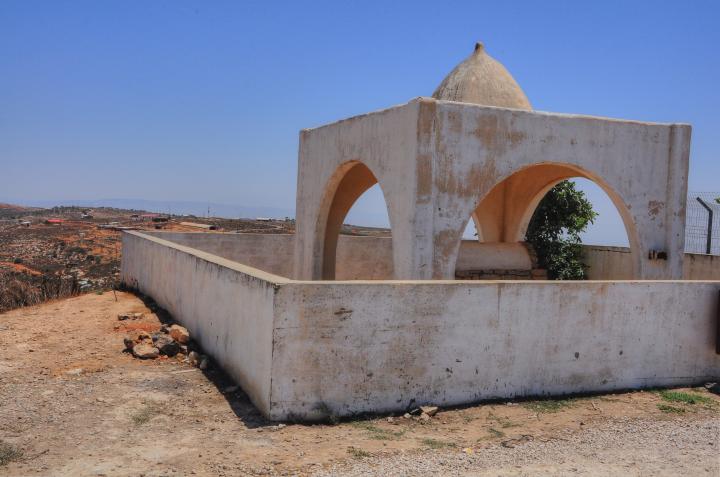 A breath-taking view of the Beit Dejan valley north of Itamar is seen here from the observation point. The closest village is Beit Furik, while the remote village on the right is Beit Dejan.

Beit Furik preserved the name of  the Roman-period Jewish town – Ferekh. The Hebrew name is based on the “Ferekh” nuts that the farmers used to grow during ancient times, as told by the 3rd C Mishna (Seder: Seeds, Masechet: Orlah, chapter 3, 8).  Today the nuts trees are gone, replaced by olive trees. 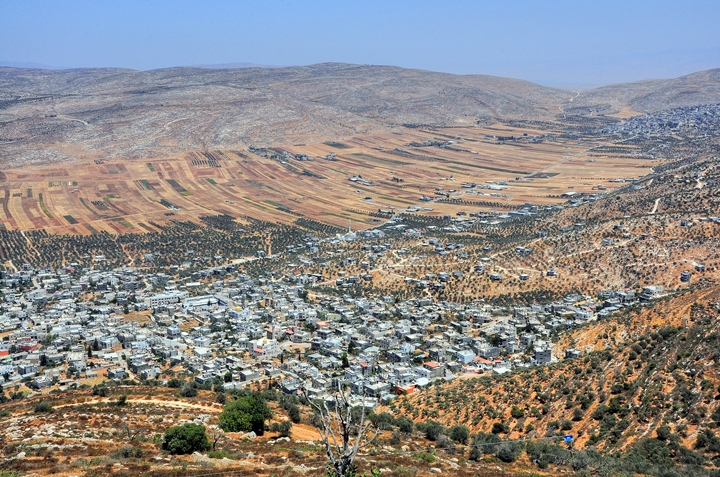 A panoramic view, as seen from the observation point near the Sheikh’s tomb, is shown in the following picture. If you press on it, a panoramic viewer will pop up. Using this flash-based panoramic viewer,  you can move around and zoom in and out, and view the site in full screen mode.  Markers provide pointers to important places.

There are several farms on the east side of Itamar. One of these caught our eyes – an Orthodox Jew raises a herd of black headed sheep. 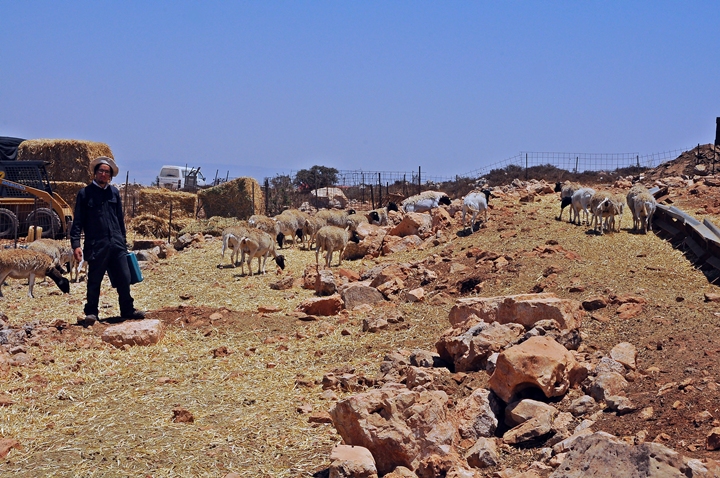 This breed of sheep is rare in Israel. They are called the “blackhead Persian” sheep, which originated in Africa. According to the shepherd, they are stronger and better tolerate to the climate than ordinary sheep. 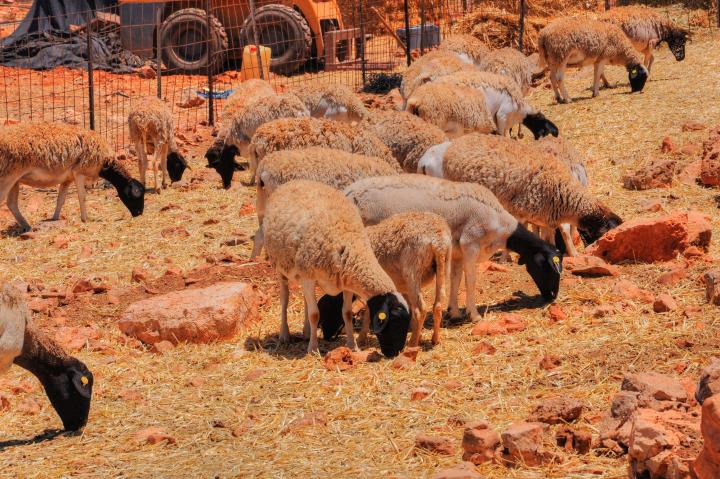 The next photo is a close-up of the shepherd – A black clothed shepherd raising black headed sheep. 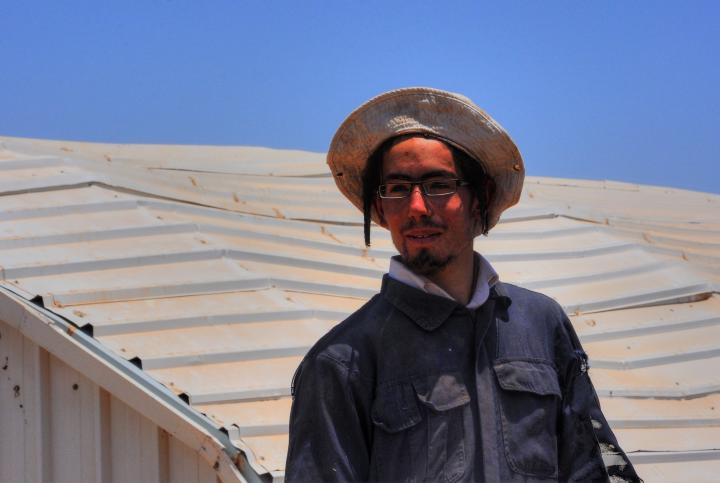 This is the highest point on the ridge, with a height of 866m (2841ft). It overlooks the entire area and beyond. 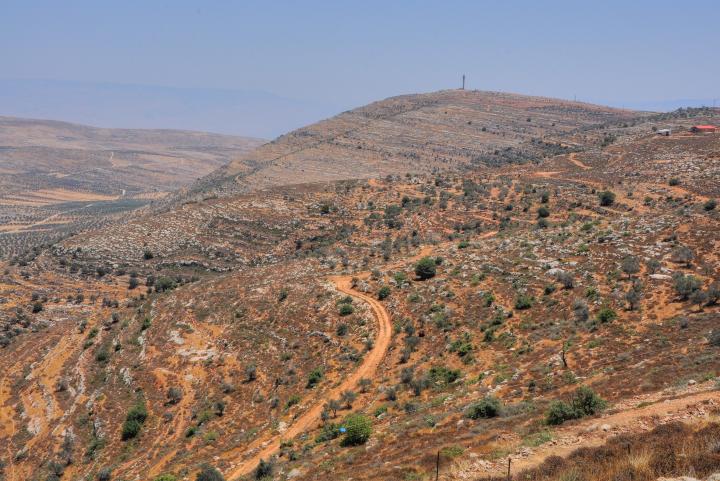 On a clear day you can see from this point the 3 seas – Sea of Galilee on the north, Dead Sea on the south, and Mediterranean Sea on the west. 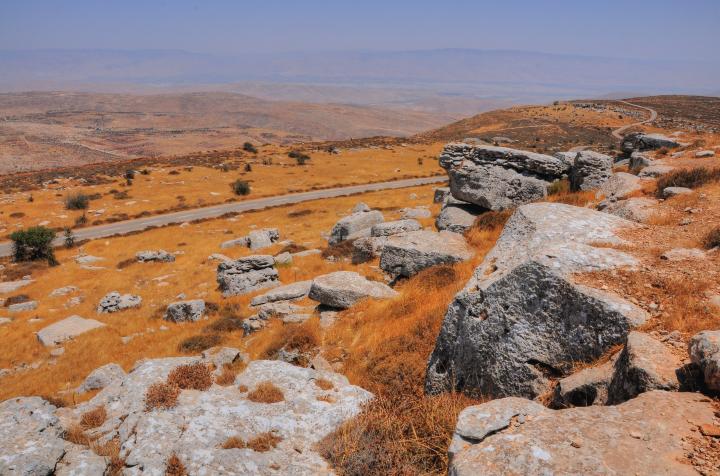 A view of the two Holy mountains – Gerizim and Ebal – are seen on the west side. 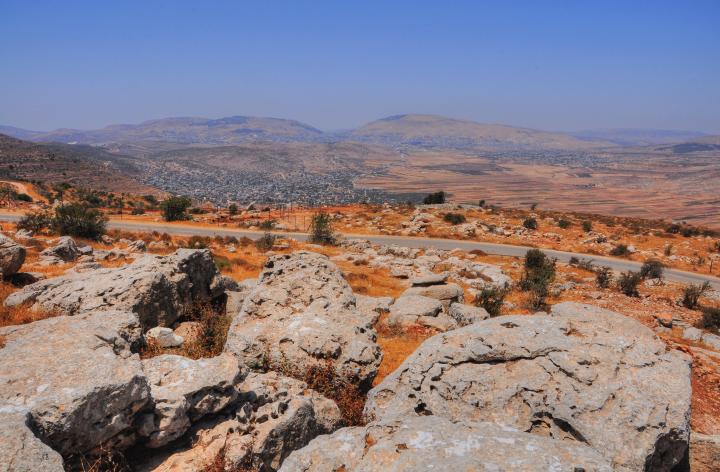 An outpost called Hill 777 (“Givat Arnon”) is an agriculture farm, located on the eastern point of the ridge. It overlooks the Jordan valley and provides breathtaking panoramas of the area.

The place commemorates Arye Agranioni who was murdered here in 2001 while guarding  the outpost. 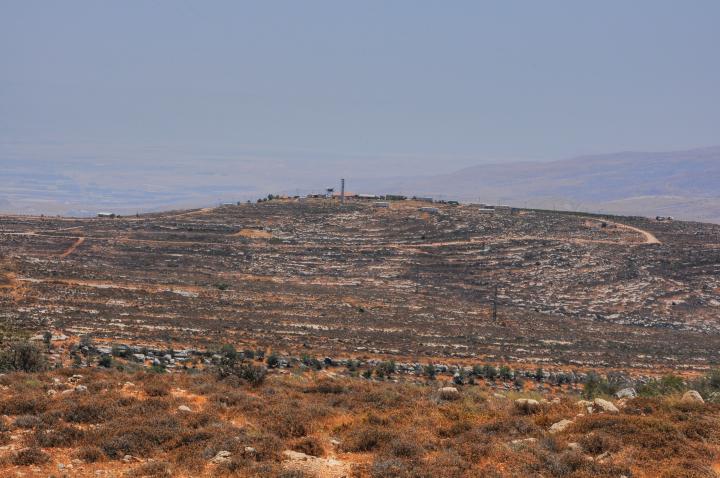 BibleWalks.com – back to the land of the Bible