A Franciscan monastery and the Church on Via Dolorosa. According to tradition, this was the site where the Roman soldiers flogged Jesus after he was convicted and sentenced to death.

The Catholic Franciscan complex in this site includes a monastery, the Flagellation chapel and the Condemnation chapel. According to tradition, this was the site where the Roman soldiers flogged Jesus after he was convicted and sentenced to death.

John 19 1-3: “And the soldiers platted a crown of thorns, and put it on his head, and they put on him a purple robe, And said, Hail, King of the Jews! and they smote him with their hands”.

The church is located on the eastern side of Via Dolorosa inside the old city of Jerusalem. It is close to St. Anna and Lions’ (St. Stephen’s) gate.

In the Aerial map below, the church of Flagellation is located in the center. Adjacent to it is the Condemnation church. 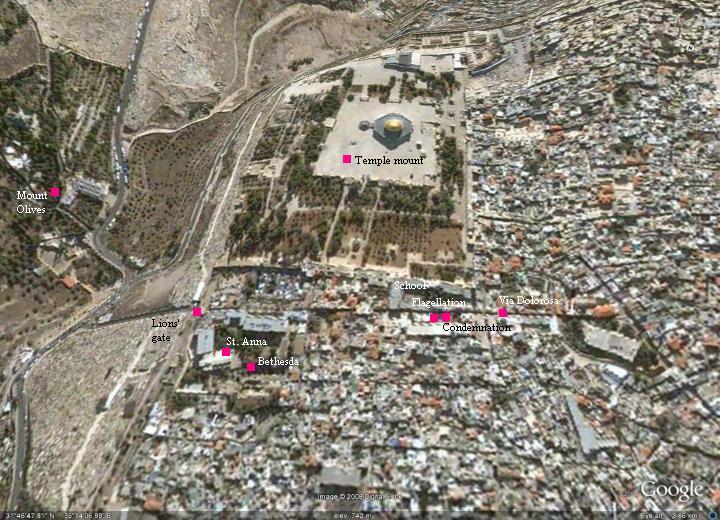 The Franciscan order was established by Saint Francis, an Italian who lived in the late 12th C. The Franciscans presence in the Holy Land started in the early 13th century, when they resided in a  small house in via Dolorosa.

The chapel was rebuilt during the years 1927-1929. It was designed by the Italian famous church architect, Antonio Barluzzi, who built most of their churches (such as Mt Beatitudes, Dominus Flevit and Basilica of Agony).

This is the view of Via Dolorosa road, looking towards Mount of Olives (seen in the far background). Mount of Olives is accessible through the Lions’ (St. Stephen’s) gate which is located at the edge of this road.

Along the left side are the walls of the Franciscan monastery. 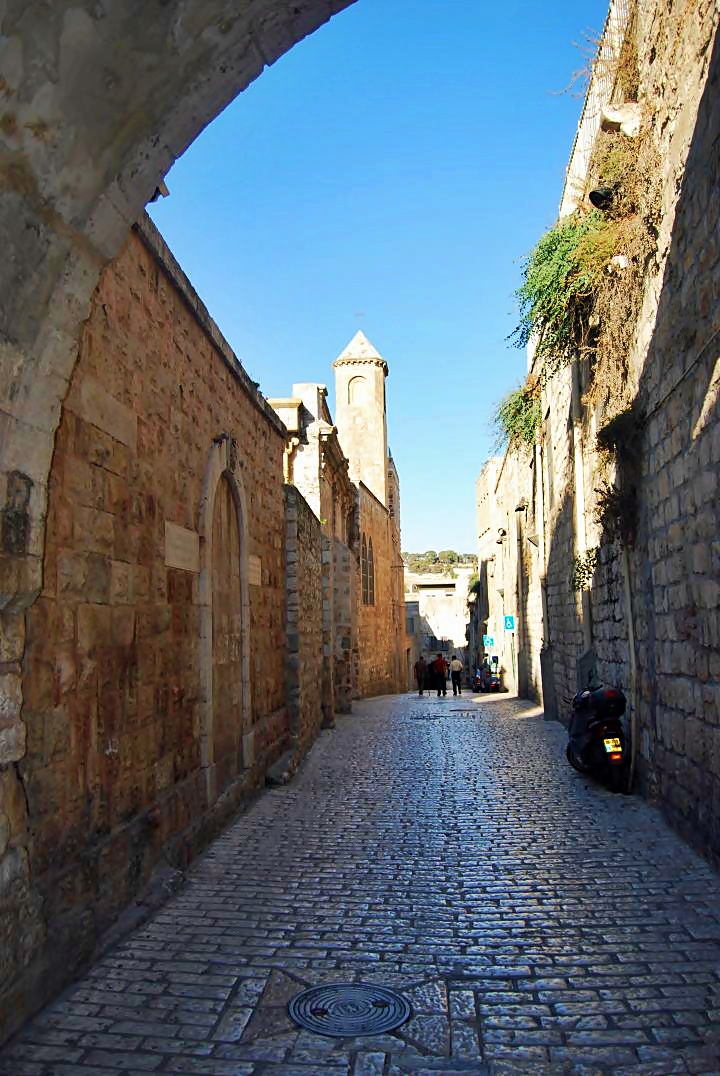 Along these walls of the monastery is a small gate which is sealed with bricks, as seen below. 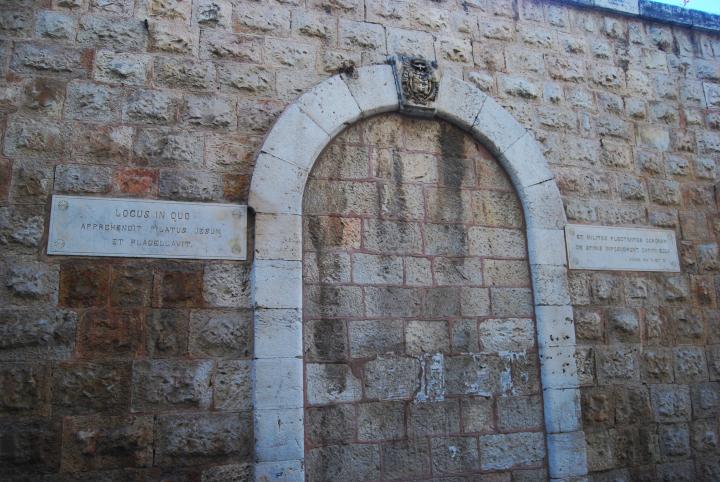 The seal above the gate has the 5 crosses Franciscan flag, which used to be the Crusaders sign of Jerusalem, and was adapted by the Franciscans. 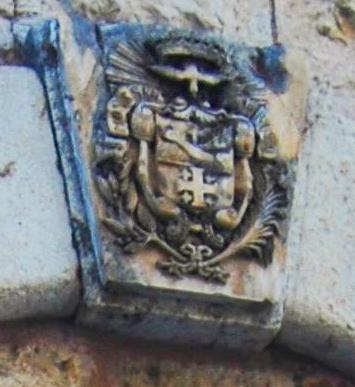 It is based on the 5 Holy wounds of the crucifixion of Jesus (2 in the hands, 2 in the legs, and one in the chest). Above the five crosses are two hands on both sides of a cross – the symbol of the custody of the Holy places. The bare hand is the hand of Jesus, while the hand with a sleeve is St. Francis of Assisi, the founder. Both hands are perforated – the holes created by nails (Jesus on the cross, St. Francis of stigmata).

There are two inscribed stones on both sides of the gate, with verses from John:

The left inscription reads “Locus in Quo”, which in common law means ” scene of the event” . The scene is the place where Pilatus apprehended Jesus and where he was flogged.

The two lines are from John 19 1 (“Then Pilate therefore took Jesus, and scourged him”);

The right inscription is a verse from John 19 2 (“And the soldiers platted a crown of thorns, and put it on his head…”). 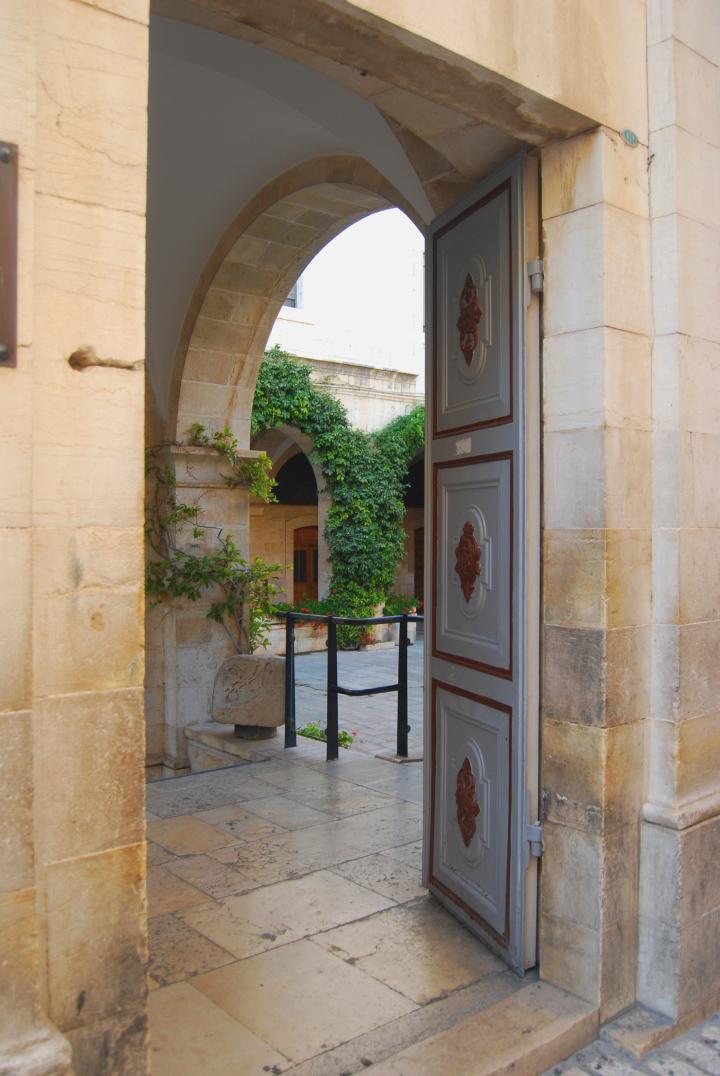 The Church of Flagellation is seen below, on the east side of the courtyard. 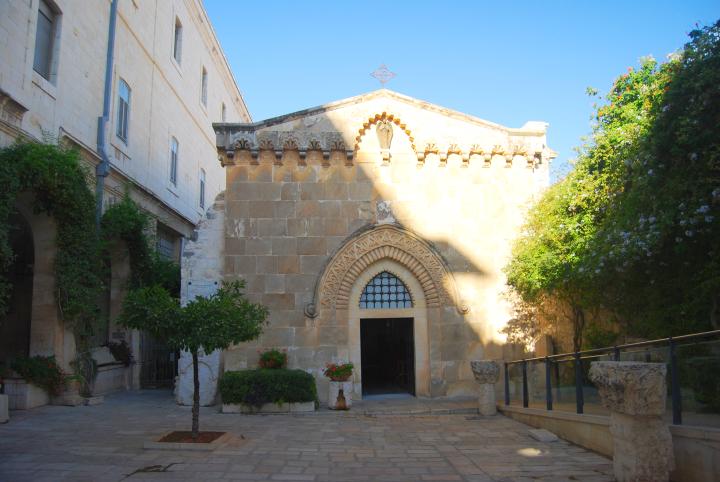 On the right side of the entrance is a small exhibition of archaeological findings. The complex hosts the Franciscan Study Centre of the Custody of the Holy Land (SBF – Stadium Biblicum Franciscanum). Their archaeologists and researchers excavated many sites in the Holy Land, focusing in the study of the Christian presence in the Holy Land. 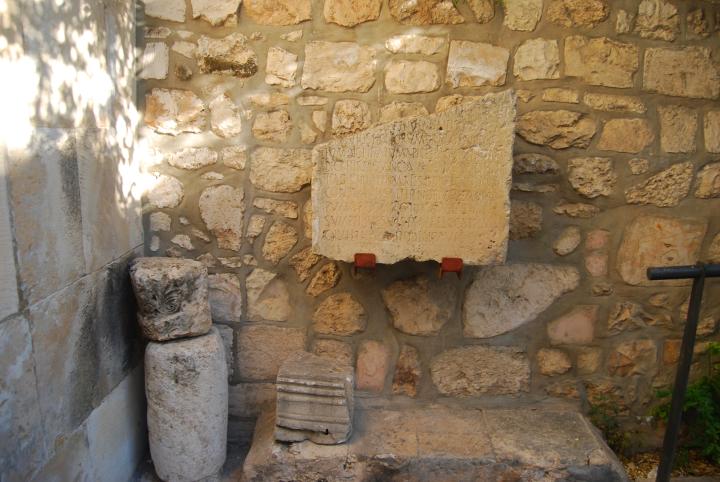 This is the view of the interior of the church, with 3 remarkable stained-glass windows illustrating Pontius Pilate washing his hands from the sin  (on the left); flogging Jesus and placing a crown of thorns over the head (center);  and Barrabbas rejoices on his release instead of Jesus (on the right). 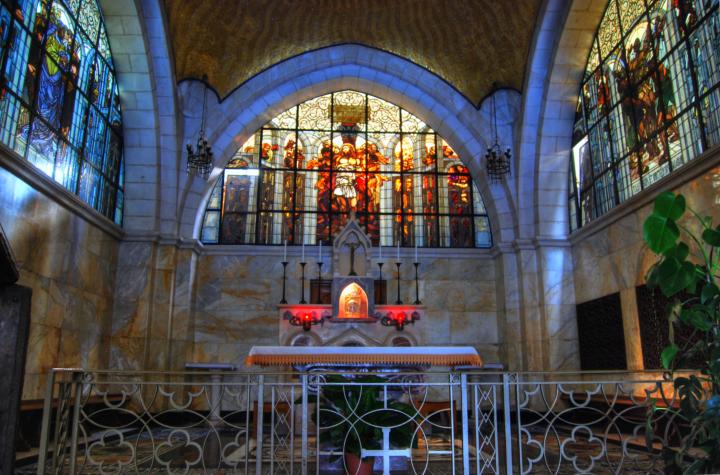 The mosaics in the center of the aisle includes the inscription dated to 1929, bearing the four-cross symbol of the Franciscans – the official “custodians of the Holy places”. 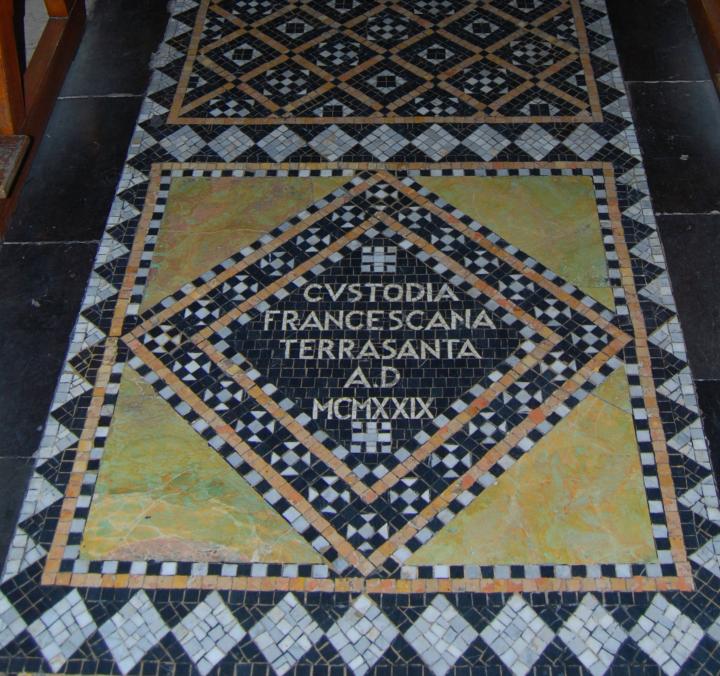 The view of the altar is seen below, with the stained-glass illustration of the scene of the event (Jesus being flogged, and a crown of thorns is placed over Jesus’ head). 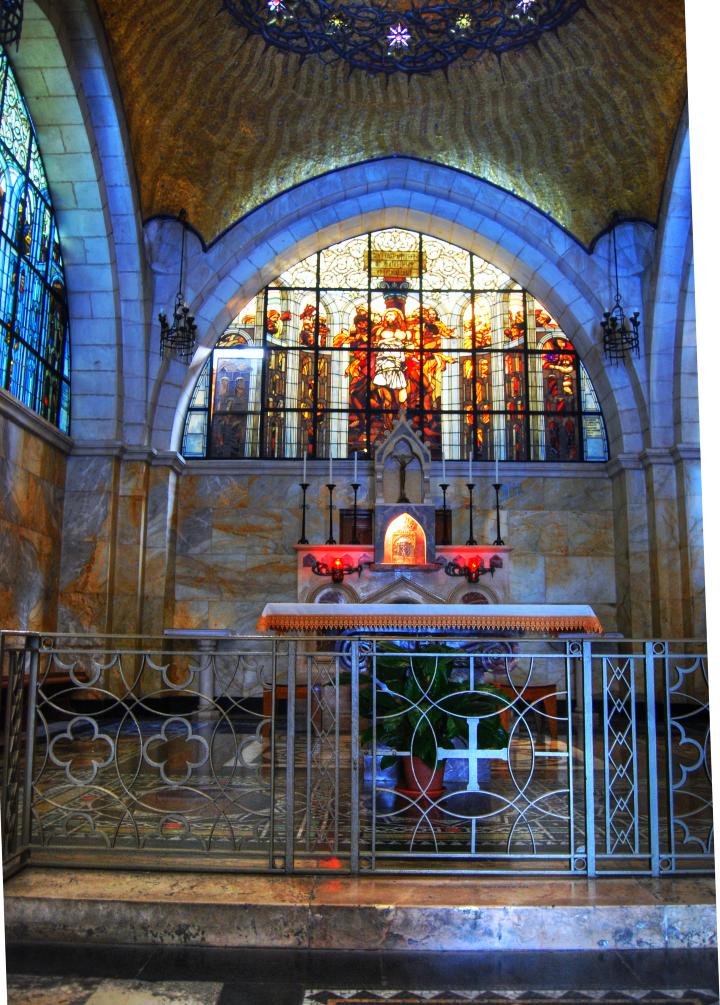 A closer view of the main altar is seen below. Above, the mosaic of the dome is designed as the crown of thorns.

(e) Station 2 of Via Dolorosa

On the walls of the convent is station II of Via Dolorosa. 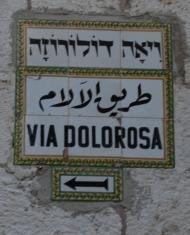 The sign “II” is seen below, marked on a round metal marker. Behind the wall is the chapel of Condemnation, and three of its white domes are seen at the top of the wall. 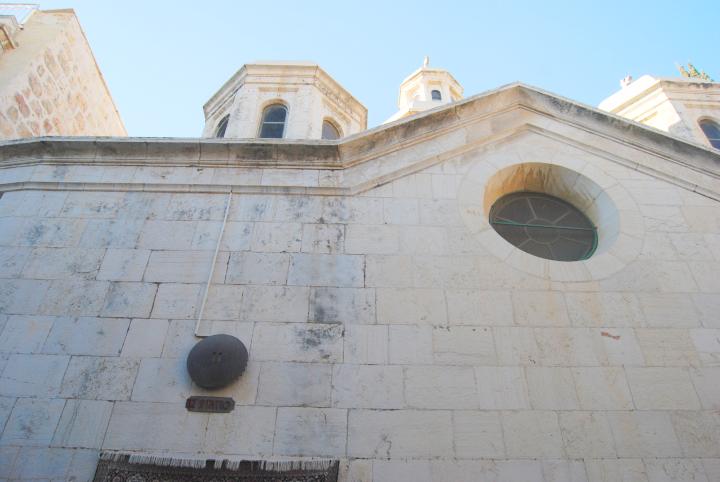 At this station Jesus  receives the cross (John 19:17, 19): “And he bearing his cross went forth into a place called the place of a skull, which is called in the Hebrew Golgotha…And Pilate wrote a title, and put it on the cross…”.

Station I is across the street. The site was the place of the seat of Pontius Pilate, where Jesus was condemned to death by Pontius Pilate.

Jesus is convicted, flogged, and the soldiers place a crown of thorns:

“Then Pilate therefore took Jesus, and scourged him. And the soldiers platted a crown of thorns, and put it on his head, and they put on him a purple robe, And said, Hail, King of the Jews! and they smote him with their hands”. 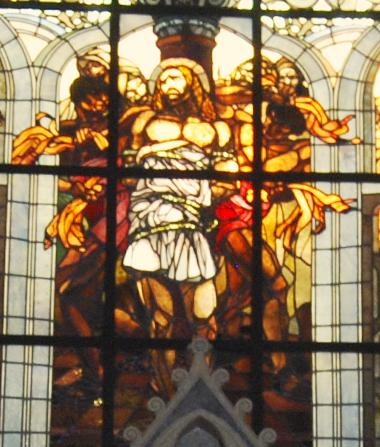 Pilate wanted to release Jesus and convict Bar-Abba, a robber, according to the Roman custom. But the crowd wanted the robber to be released instead of Jesus:

“Pilate saith unto him, What is truth? And when he had said this, he went out again unto the Jews, and saith unto them, I find in him no fault at all. But ye have a custom, that I should release unto you one at the passover: will ye therefore that I release unto you the King of the Jews? Then cried they all again, saying, Not this man, but Barabbas. Now Barabbas was a robber”. 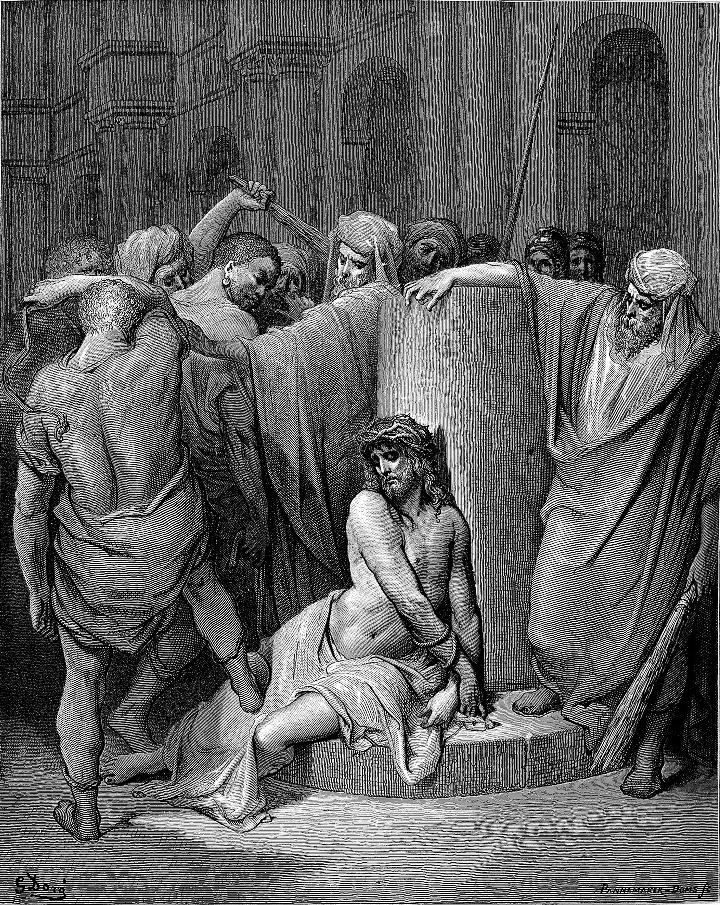