Ruins of a Byzantine village located in the southern Golan heights. The site has a spring that flows out of a double-arches structure, and also ruins of a grand Roman period synagogue.

Ruins of a Roman village located in the southern Golan heights. The site has a double-arches wall where a spring is located  (hence its name), ruins of an ancient synagogue (now under reconstruction), and ancient houses.

The site is located on a steep hillside about 1KM west to Kibbutz Natur, just above Nahal Samech which flows into the sea of Galilee. The Roman village size is about 30 Dunam (3 Hectares).

The site can be reached by a passenger car via the main north-south road in the Golan heights (#808, from Katzerin to Ramat-Magshimim). Follow the signs to Kibbutz Natur. Just before the Kibbutz a dirt road towards the south makes a bypass – around  then below the Kibbutz – to a parking lot. From the parking lot there is an easy access to the edge of the cliff above the site, and then stairs that lead to the arches, synagogue and houses. It is a recommended stop, and the mix of history, nature and view is worth the 1 hour detour.

The area of the southern Golan heights saw a dramatic increase in the number of Jewish villages in the end of the 1st century BC, at the times of King Herod, from virtually none – to 20 or more villages. The reason was due the fact that King Herod received the area from Augustus Caesar and relocated Jewish settlers to this area in order to populate his new territories. This site was probably one of the Jewish villages that were established at this time.

The ancient Jewish village reached its peak in the Byzantine periods (4th-6th century AD) as most of the other villages in the Holy Land. The grand synagogue was built in the 5th century, as established by the excavations. The quality of the structure shows that the village could afford such expenses due to its commercial success.

The Jewish villages in the Golan were demolished in the 7th century AD after the Arab conquest.

During the 17th-20th century AD (Ottoman period) new Arab settlers, mostly minorities such as Druze, resettled in the Golan heights. They reused the hewn stones and architectural elements from the ancient villages in order to build or rebuild their new houses. Within the ruins of the Byzantine village the new settlers established a new Arab village called El-Manshiyah,  which existed until 1967.

The site was discovered in 1885 by the explorer Laurence Oliphant (see references). He identified the site as a 1st-2nd Century Synagogue, and regarded it as one of his major discoveries in the Holy Land. It was later  excavated in 1905 by Kohl and Watzinger, who also excavated Capernaum.

Before the 6 day war (1967) the area below the site was one of the sections where the Syrians attempted to divert the sources of water from the Sea of Galilee, but the Israeli air force blew up the heavy equipment used for this plan (1966). Since the war the Golan heights are within Israeli territory, and a Kibbutz (Natur) was established 1 KM east to the site.

In recent years the site is undergoing reconstruction of the Synagogue. The small area of the synagogue is currently (Sep 2007) fenced off,  and will soon be opened to the public. The site was recently renamed “Kshatot Rehavam” and “Ein Hakshatot”.

There are no known inscriptions that can reveal the name of the village. According to scholars, the site may have been the village of Kamattirya. It is referred to in the Talmud – the 5th century AD books of religious practices, an extension and interpretation of the earlier texts of the Mishna – 3rd century AD.

A person – by the name of Simon – is from a village called Kamattirya, and is mentioned in several places  (for example: Talmud Yerushalmi, Brachot, chapter 9 page 2).

The photo below shows the southern side of the site, looking from the top of the hill towards the west. The deep valley behind the hillside is called  Samech, and it flows to the sea of Galilee (seen in the center far background). The double-arched spring is located on the hillside on the left side. Some of the ruins of the village’s houses are seen on the right side. 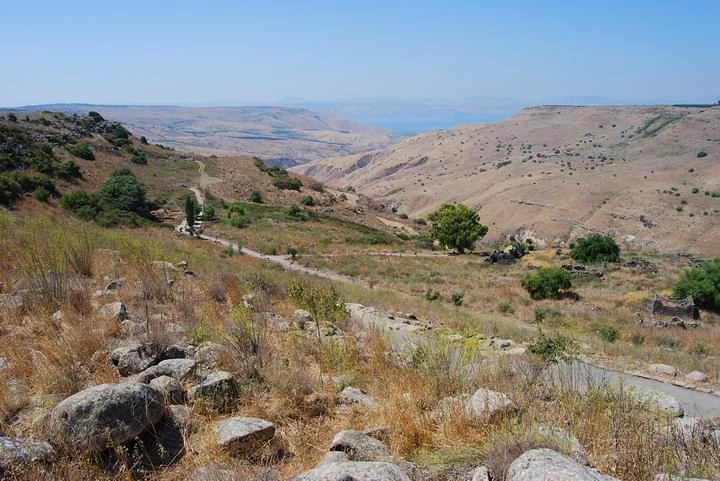 A view towards north shows more of the Arab houses, and the ruins of the Synagogue which are now under reconstruction (using a large yellow crane). 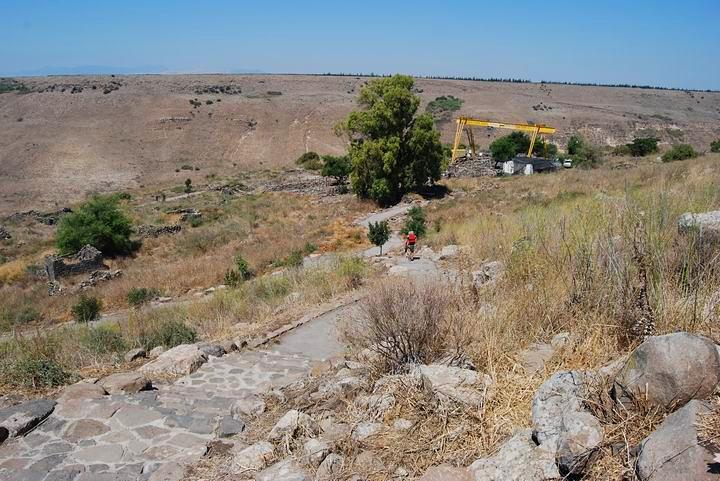 The magnificent Synagogue was a double-story structure, built out of black hewn (cut) basalt stone.   Its sizes are  18.8M x 16.8M x 12M high. It is dated to the Byzantine period (5-6th century AD).  The roof above the second floor was made of tiles.  A vault was found under the floor and was probably used to store old scrolls.

The photo below shows the ruins of the  synagogue, with the heavy yellow crane still working on the reconstruction. 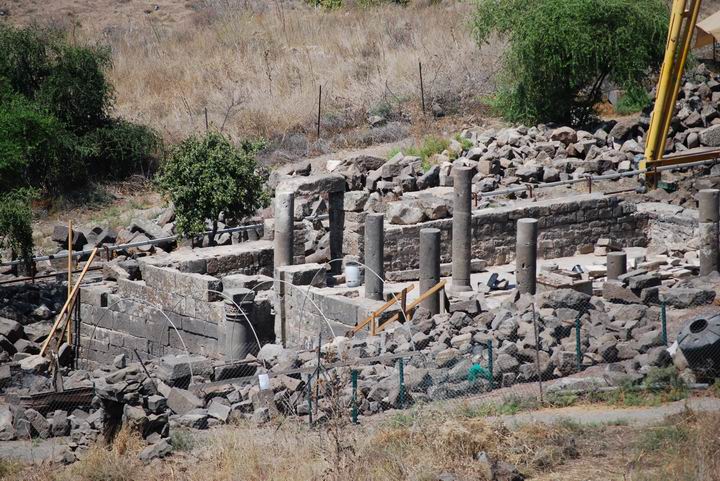 The synagogue had columns arranged in 2 rows (5 on each row), and two columns between the rows. There were two entrances (1.62M wide door facing the south side in direction of Jerusalem, and a 1.32M wide door on the west side facing the Sea of Galilee). The excavations discovered benches on three sides (east, west and south). The west side benches and door can be seen on the photo below – behind the columns. 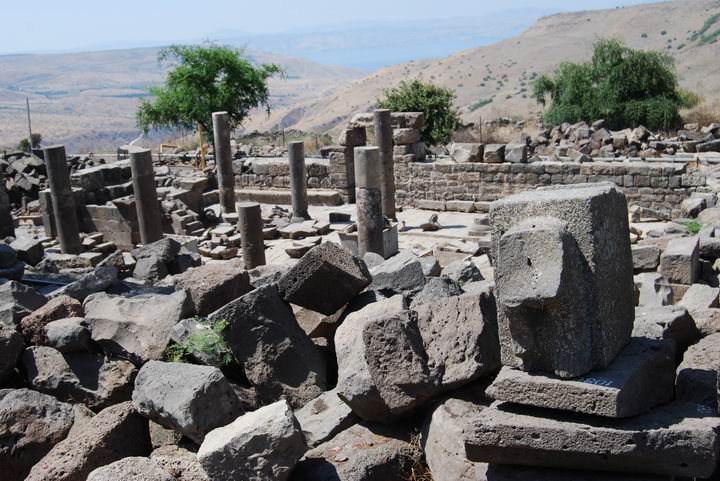 Around the site are ruins of the Arab village of El-Manshiyah, which preserved most of the Roman houses and building blocks. The photo below shows some of these houses on the west hillside facing the sea of Galilee (seen in the center behind the hills of the Golan heights). 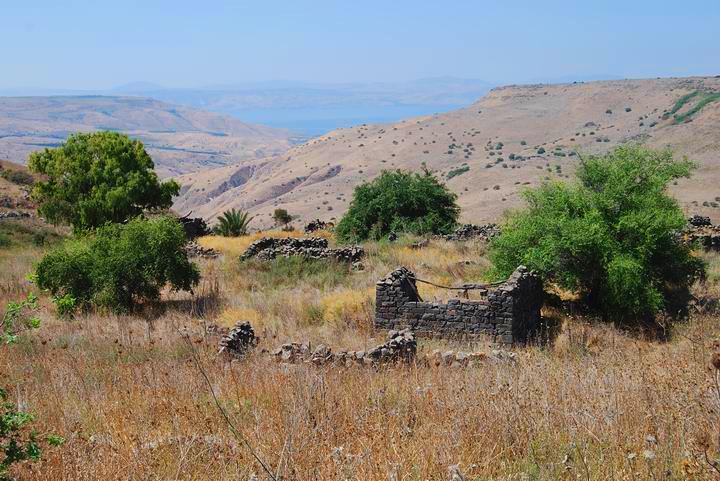 In some of the buildings were Roman-era stones with carvings of various decorations, probably taken from the Synagogue. The stones were relocated elsewhere. 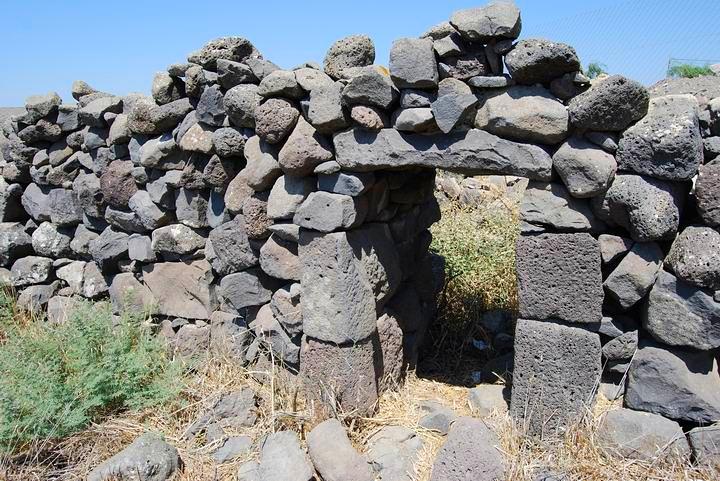 The spring at the Arches (Ein Hakshatot):

On the south side of the site, under a high basalt cliff, is the spring that was the heart of the village. A double-arch structure, built from large hewn stones, collects the waters of the spring into  rectangular pools. 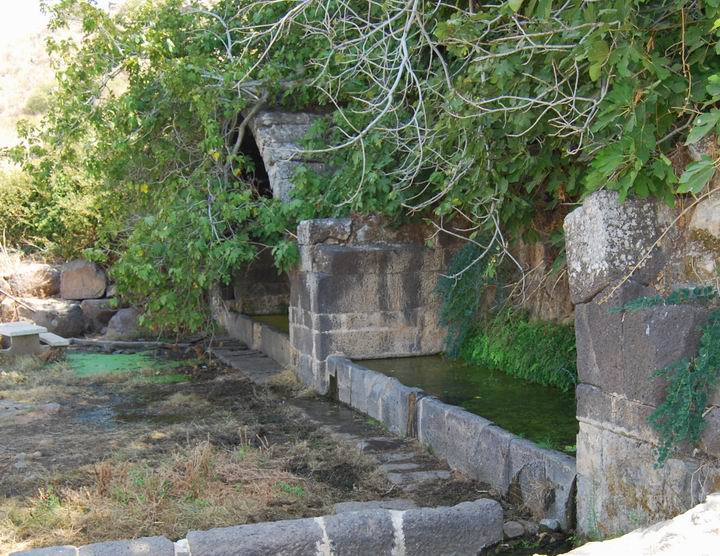 Another view of the spring. 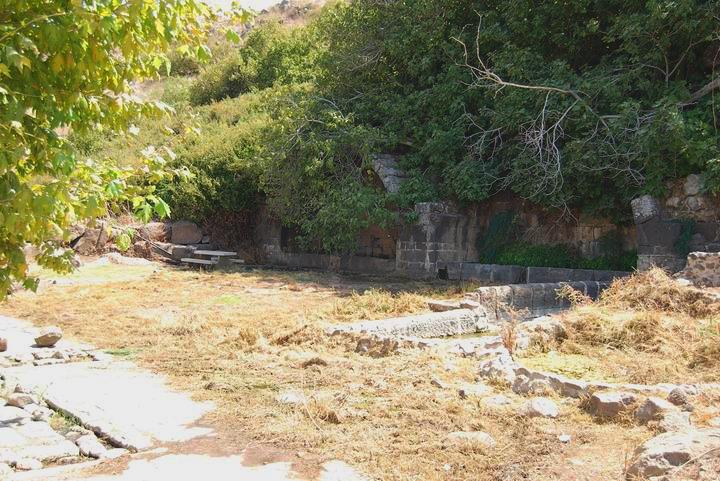 The spring’s water are clean and refreshing – and even some dive in. The water is covered in some sections by a  fine mesh of water plants. 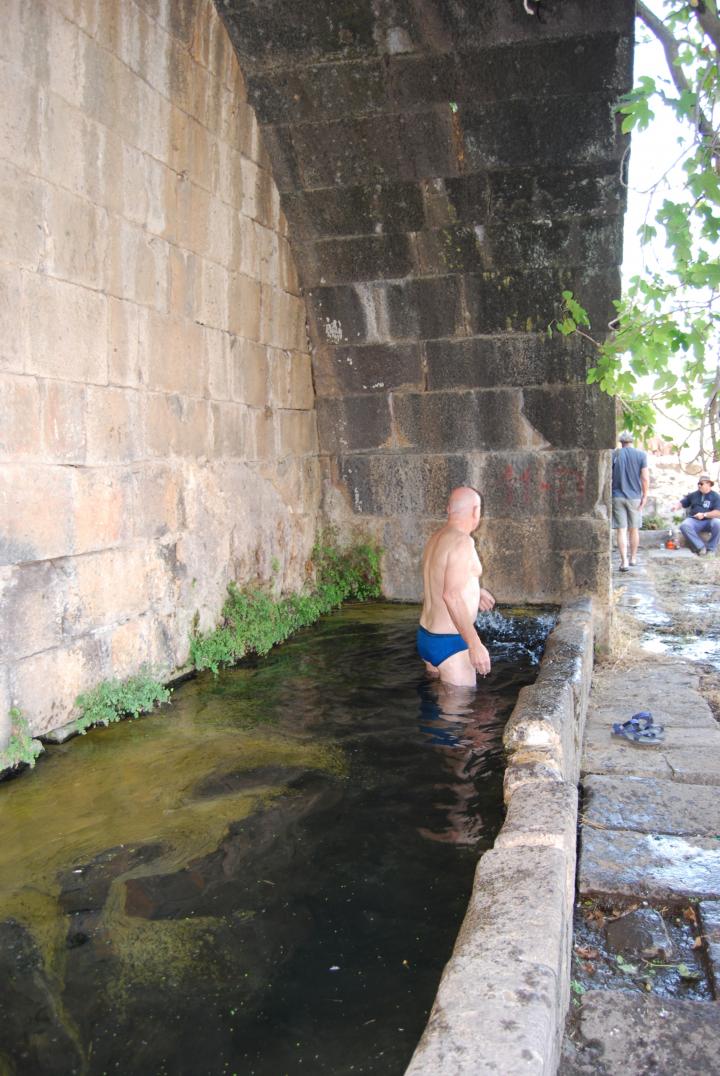 A detail of the spring and the pool on the south-west side. 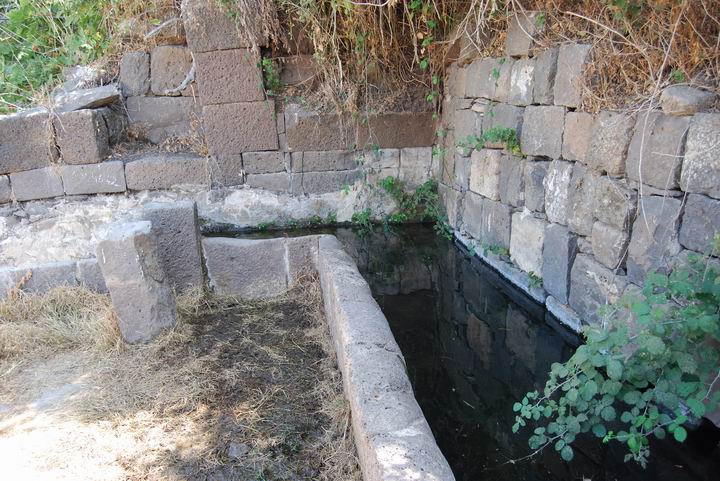 Another detail of the spring, with a large stone reservoir. 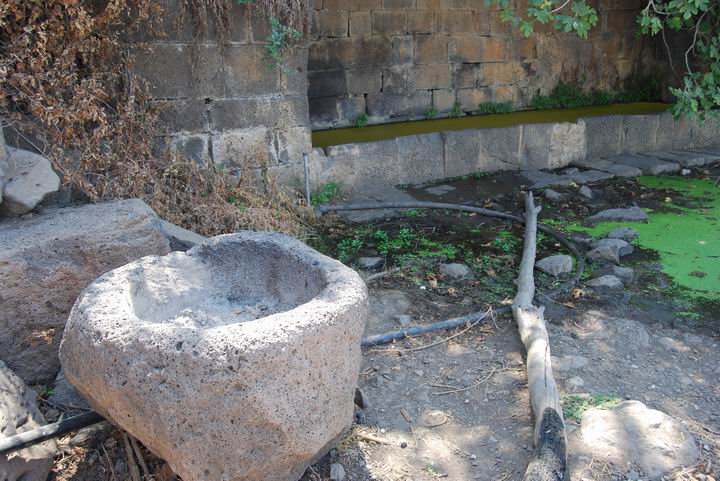 His article was published on  Mar 20  1885 in the New York “Sun”, with the title “Discovering Um el-Kanater”, where he tells his readers about his discovery of the springs and the ancient Synagogue.

Laurence was charmed by the spring, and also noticed a faint inscription on one of the walls at the height of 16 feet. He also found a carved stone with the face of a Lion. Inside the pool he noticed that there were fish swimming in the waters and was puzzled by this fact.  His guide, a Sheik, called the spring “Umm el-Kanater” – mother of the arches.

In the ancient synagogue he marked the size of the structure and located the carved stones. Laurence determined, based on other sites, that this was built in the 1st/2nd C AD.

Summarizing these discoveries, he regarded the site as one of his most important discoveries, and recommended further investigations.

These popular reports indeed brought professional excavations 20 years later and contributed to the revival of the explorations and discovery of the Holy Land – which were almost non-existent before his times.