Ein Gedi (Kid spring) is located on the western shore of the Dead Sea, and is the largest desert oasis in Israel (1,000 dunams – 250 acres). It is watered by four springs. Its fresh waters made the settlement possible since ancient times, and was referred several times in the Bible as a fertile place.

Ein Gedi was prosperous in the Hellenistic and Roman period, its wealth based on its famous dates, vegetation, and the precious  balsam (persimmon, Hebrew: afarsemmon) which was used to manufacture perfume (Hebrew: bosem).

Ein Gedi is located 50KM south east of Jerusalem, 16KM north of Masada.     An aerial map of the area of Ein-Gedi is shown below, indicating the major points on interest. 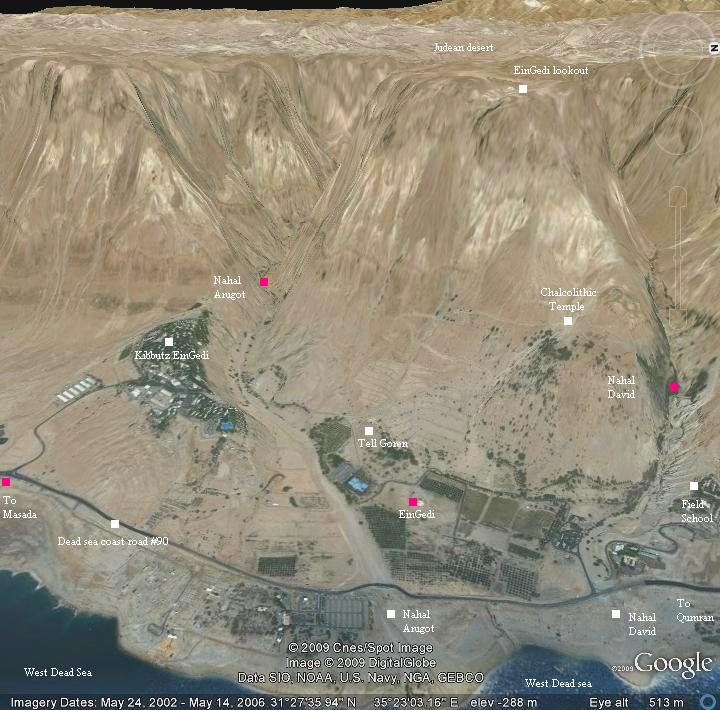 Ein Gedi was inhabited starting from the Chalcolithic period (5,000 years ago), in places along the streams around Ein Gedi. A temple from that period was excavated on the hill above Ein Gedi spring.

The site was known in the Biblical times as fertile, blessed by the spring it is named after.   This area is where David hid from the pursuing King Saul (1 Samuel 23 29: “And David went up from thence, and dwelt in strong holds at Engedi“).

Ancient Ein Gedi is located on Tel Goren, a low hill (size of 2 dunam – 1/4 acre) on the north bank of Nahal Arugot. It was established as a small village in the 7th century BC, during the Judean Kingdom. A seal was found bearing the name “Uriyahu son of Azaryahu”, perhaps belonging to an official Judean clerk around the 6th-7th century BC.

The Babylonians destroyed the village (located on Tel Goren) in the 6th century BC (~582 BC). It was repopulated after the exiles return during the Persian period (~440 BC).  The village continued until the 4th century, then was deserted.

The Hasmonean Kings, starting from Hyrcanus I (134-104 BC) and especially Alexander Jannaeus (103-76), rebuilt the oasis, marking the rise of the new Ein Gedi. They added aqueducts and pools, initiated the balsam (persimmon) industry, planted trees on the hillsides, and relocated the new village to the north of Tel Goren.

The village of Ein Gedi reached its peak during the Roman/Byzantine period, and was a wealthy town, famous for its dates and rare perfume, which could only be grown in few sites on the Dead Sea shore. The new Ein Gedi relocated north-east from Tel Goren, to a ridge between Arugot and David streams, and expanded to 40 dunams (10 acres) – one of the largest villages. The village was densely built, with houses connected to each other. A 2nd century AD Roman bathhouse complex (40 x 5M) was excavated on the sea shore, north-east of the city.

Ein Gedi was damaged during the first and second revolts against the Romans (70, 132 AD), but survived after a short time. During the first revolt, the village was sacked by their fellow zealot Jews from Masada, who filled up their storerooms with the booty from the village.

A grand synagogue was excavated inside the ruins of the town. The present structure is dated to the 5th century AD and based on earlier structures starting from the beginning of the 3rd century.

The synagogue was destroyed by fire in the middle of the 6th century, during the period of Justin II. Thus came an end of 1,000 years of civilization in the Ein Gedi oasis, and remained in ruins since then.

In the Mameluke period, during the 13th-14th century, some of the ruined houses were used for temporary residence, the village never overcame the destruction. During the late Ottoman period there were several Bedouin families in Ein Gedi that grew vegetables.

Ein Gedi became part of the newly founded Israel since 1949. A kibbutz was established in 1953, named Ein Gedi, on the south side of Nahal Arugot. Being located in the Dead sea depression, it was the lowest agriculture farm in the World (320 under sea level, and 80M above Dead Sea level). A nature reserve field school – the first of its kind in Israel – was established in 1960 on the north side of Nahal David, which was located until 1967 on the border with Jordan.

Ein Gedi became since then a regional center and base for nature hikes, camping and swimming.

A view of the area of Ein Gedi is seen here, from the main road along the coast of the Dead Sea. The Kibbutz of Ein Gedi is on the left, located on a hill overlooking the Arugot brook. In the background are the high mountains of the Judean desert, at an altitude of 150m above sea level, or 450m above the Dead Sea level.  On the right side are the ruins of ancient Ein Gedi. 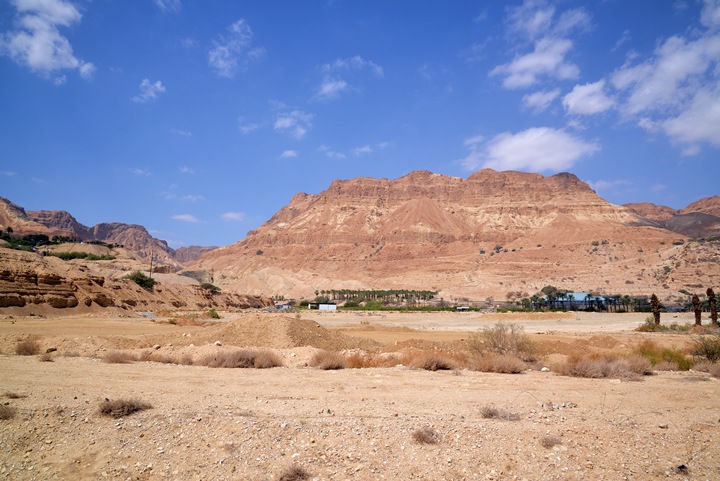 The synagogue is located on the north-east side of Tell Goren. It was first built in the 3rd C AD as a modest structure. The structure underwent a series of renovations during the 4th C and 5th C. It had two floors, with a staircase on its northwest wall.

A tent, seen below, covers the area of the synagogue to preserve the findings. 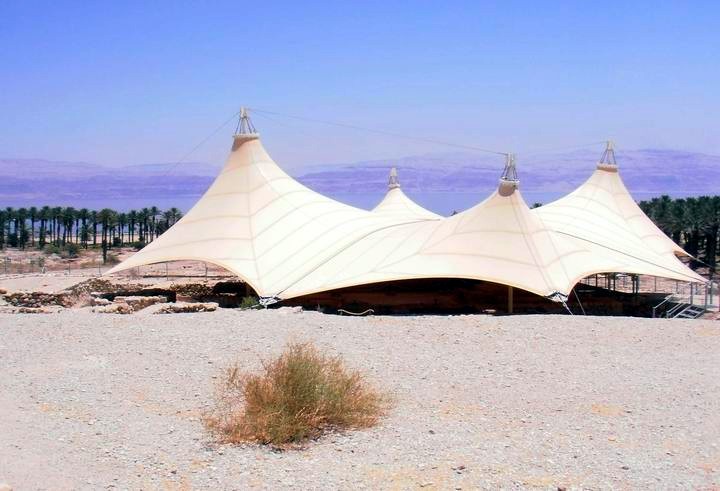 The residential structures around the synagogue are seen below.  The Roman/Byzantine village was densely built, with houses connected to each other. Some of the rooms seen below may have served the synagogue’s staff. 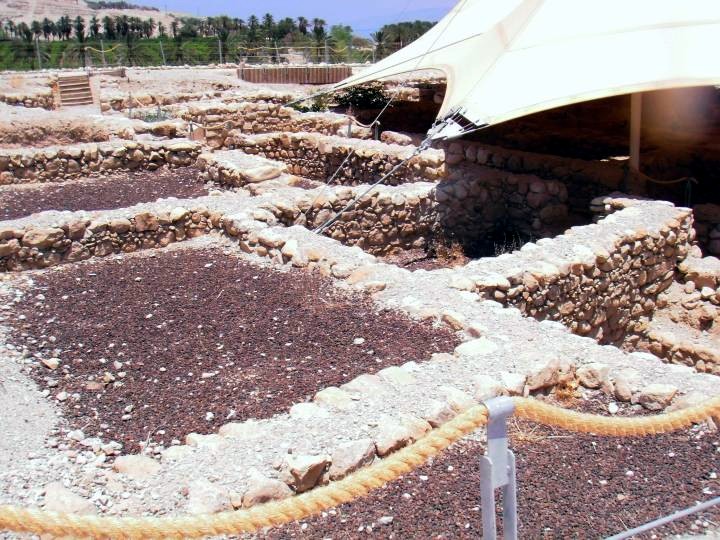 Under the protective tent is the large (16 x 13M) synagogue, which was rebuilt in the 5th century. The front of the structure is directed to the north – towards Jerusalem. 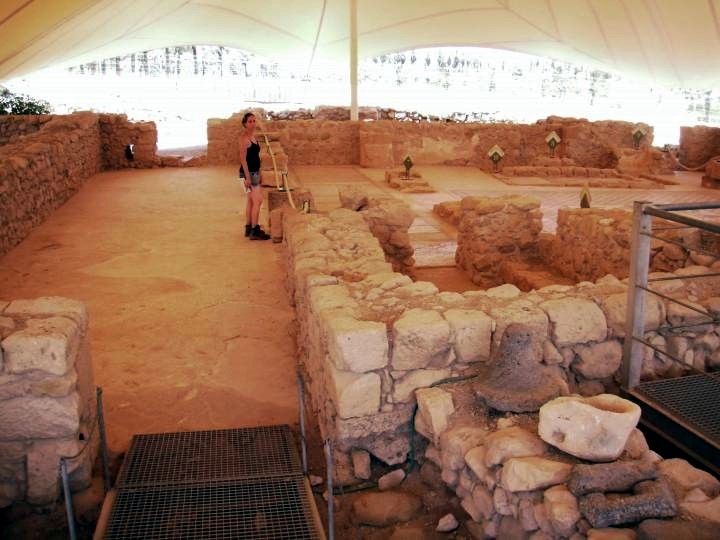 The synagogue pillars and walls were covered by plaster and painted with color. The floor was covered by a beautiful mosaic carpet. 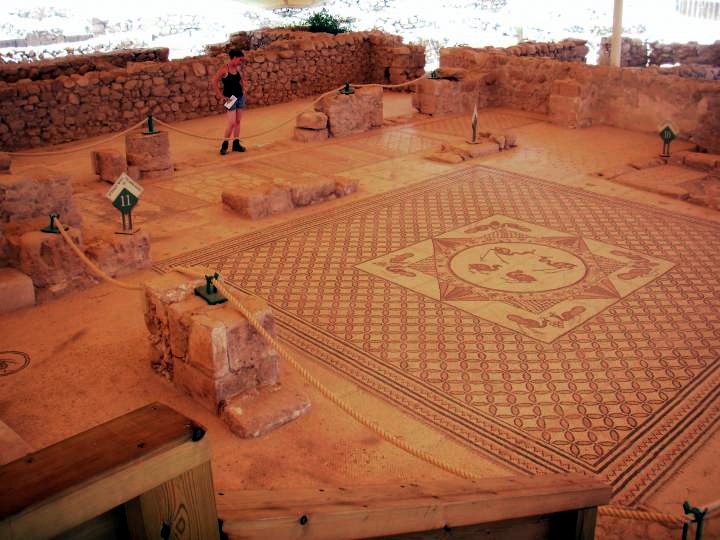 The floor of the synagogue is covered by a beautiful mosaics. Most of the mosaic carpet is decorated with quad petal flowers. In the center is a circle with four birds. The circle is framed by two squares, with a pair of peacocks on each corner. 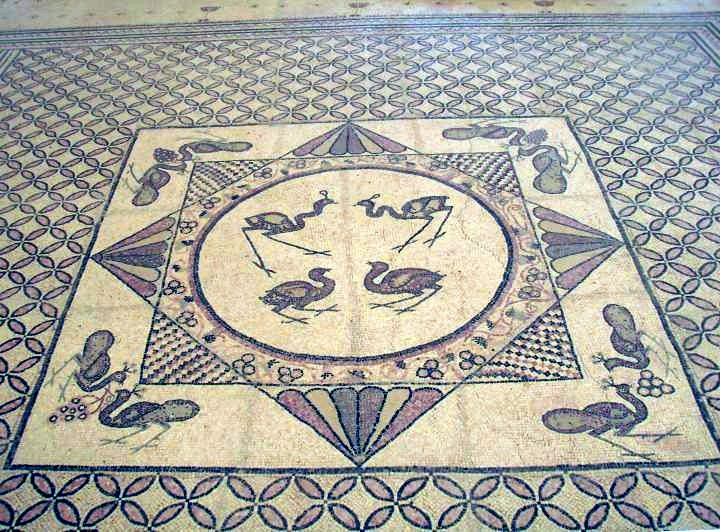 A detail of one of the corners is seen below, with a pair of peacocks eating grapes. 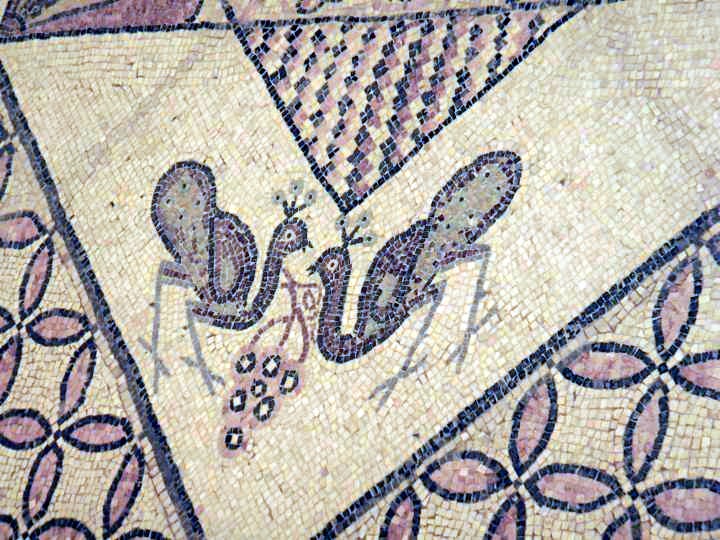 The Torah Ark was placed in front of the north wall, and a rectangular bimah  (platform for the torah reading) was installed.  At the bimah is a small mosaic section (seen below),  depicting a peacock in the center of a circle, framed by a square with geometric forms. Three small figures of the seven branched menorah (candelabrum) are seen in front of the bimah. A hoard of 5,000 coins, a tall bronze menorah, and other artifacts, were found hidden in a niche near the ark. The coins were dated up to Justin II (565-578), which date when the synagogue was torched. 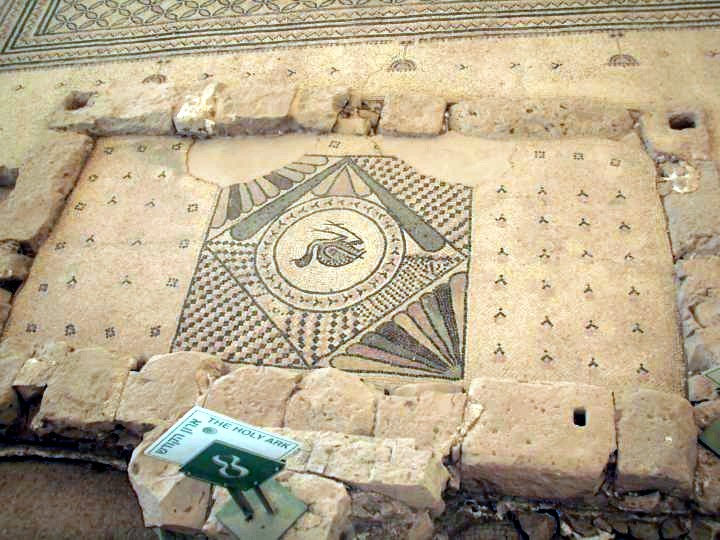 Inscriptions in Hebrew and Aramaic list the donators who helped to construct and renovate the synagogue. 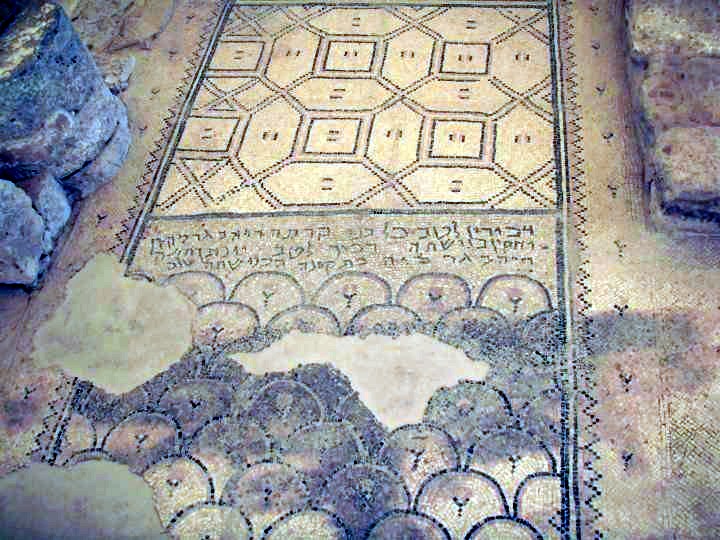 A detail of the Aramaic inscription from above is seen below. It starts with  “Remembered for good…”, a common prefix found in most Roman/Byzantine synagogue floors. 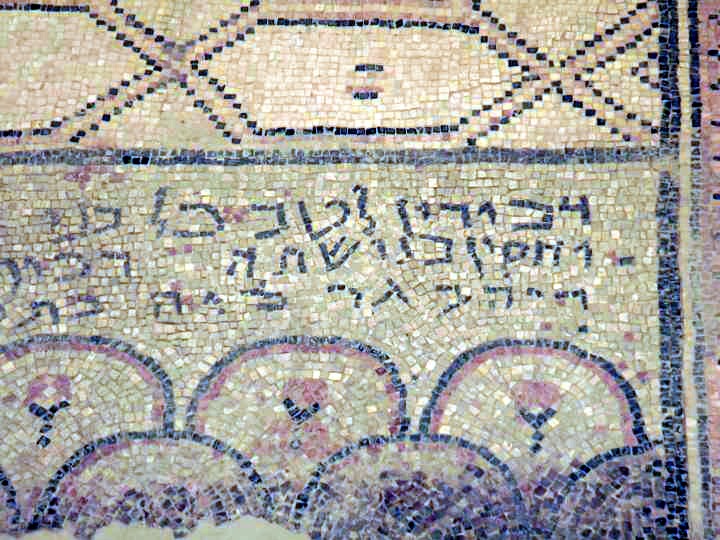 A unique inscription with 18 lines contained within 4 long tablets. The inscription is seen in the photo below, and is translated from Hebrew/Aramaic: 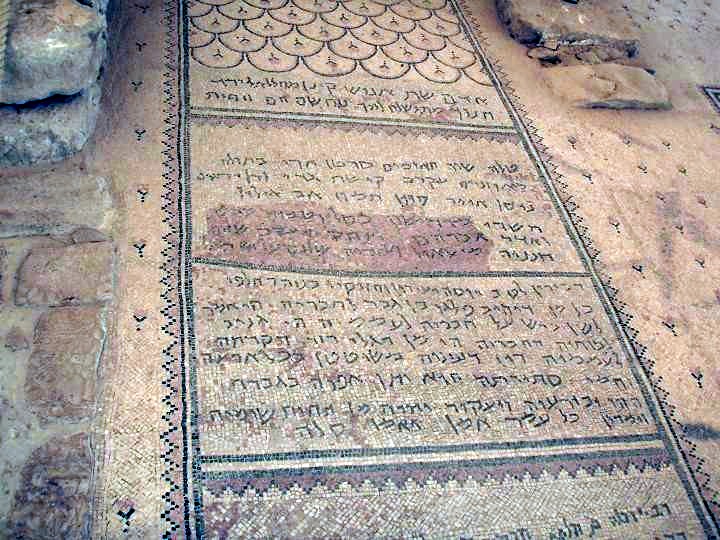 Ancient Ein-Gedi started on Tel Goren, situated on a low hill on the north bank of Nahal Arugot. It was established as a small village in the 7th century BC, during the Judean Kingdom. The village thrived during the next 14 centuries, expanding into a small city which was located around and near the ancient site. 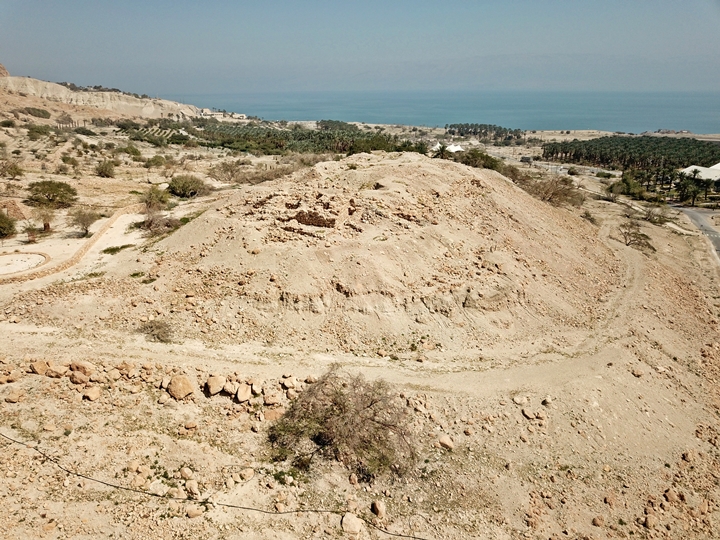 There are many references in the Bible on Ein Gedi:

This verse is an optimistic prophecy of the Dead sea becoming live again, with abundant fish in its waters. Note that Eneglaim may be an ancient city where Qumran is located.

“And it shall come to pass, that the fishers shall stand upon it from Engedi even unto Eneglaim; they shall be a place to spread forth nets; their fish shall be according to their kinds, as the fish of the great sea, exceeding many”.

This verse describes the location of Ein Gedi, since Hazazon means “the middle” (of Dead Sea) and Tamar is the area of the Dead Sea (the name of the council that includes Ein Gedi). It is also referred in Genesis 14 7 as the area of the Amorites.

“Then there came some that told Jehoshaphat, saying, There cometh a great multitude against thee from beyond the sea on this side Syria; and, behold, they be in Hazazontamar, which is Engedi“.

This text adds more to the text in 2 Chronicles 20, adding that Ein Gedi grows the best kind of dates and balsam (Balsam/Opobalsamum  was used to produce a particular type of perfume).

“About the same time the Moabites and Ammonites made an expedition against Jehoshaphat, ,and took with them a great body of Arabians, and pitched their camp at Engedi, a city that is situate at the lake Asphaltiris, and distant three hundred furlongs from Jerusalem. In that place grows the best kind of palm trees, and the opobalsamum”.

In 67AD, during the Great Revolt, The Sicarii from Masada sacked the village of Ein Gedi on Passover eve, killing 700 and ousting the rest.

“…they came down by night, without being discovered by those that could have prevented them, and overran a certain small city called Engaddi:–in which expedition they prevented those citizens that could have stopped them, before they could arm themselves, and fight them. They also dispersed them, and cast them out of the city. As for such as could not run away, being women and children, they slew of them above seven hundred. Afterward, when they had carried every thing out of their houses, and had seized upon all the fruits that were in a flourishing condition, they brought them into Masada. And indeed these men laid all the villages that were about the fortress waste, and made the whole country desolate; while there came to them every day, from all parts, not a few men as corrupt as themselves”. 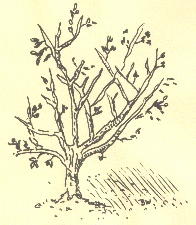