The spring and the garden is located south east of the community of Dolev. A dirt road, 2.5km long, leads east from the Dolev junction (crossroads of highways #463, #450 and Kefar Ni’ma) to the spring. 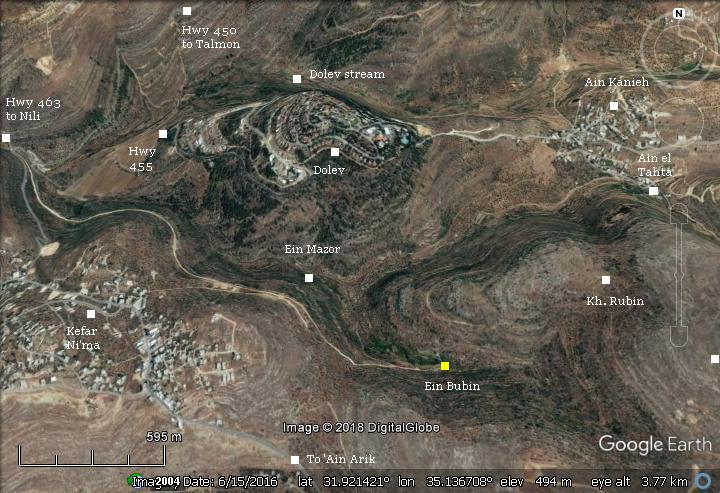 Conder and Kitchener surveyed this area during the Survey of Western Palestine (SWP) in 1873.   A section of their map (of sheets 14 & 17) is shown here.

The site – Ein Bubin – does not appear on the map. It appears only on the British mandate map. Instead, there is another spring named Ain el ‘Ainein (Arabic for: the spring of 2 springs).

Yet another spring is mapped to the north of the site: ‘Ain el Tahta – Arabic for ‘the lower spring’. 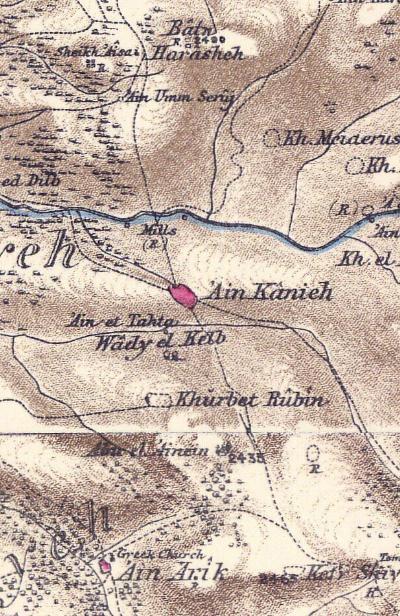 Part of maps Sheet 14 & 17 of Survey of Western Palestine,

Other sites seen on the map:

*  Wady el Kelb (Arabic for: the valley of the dog) is marked on the valley north of Ein Bubin.

*  Khirbet Rubin (Arabic for: ruins of prophet Reuben) is seen north east of the spring.

*  ‘Ain Kanieh (Arabic: Crimson spring) is a village north of Khirbet Rubin, situated on the road to Ramallah.

* ‘Ain Arik:  South of the site is a small village, where the map reads ‘Greek Church’. The Arabic name means ‘the spring of the compactly-built one’.

* Wady ed-Dilb : To the north of ‘Ain Kanieh is a stream, illustrated with a blue color. The valley  (Arabic: Wady ed-Dilb, Hebrew: Dolev valley), had mills along its course. A Roman road passed along the valley from West to East.

During WW1 (Nov 19-21 2017) the British forces (under General Allenby) attacked the area controlled by the Turks and Germans in the Judean hills, prior to the conquest of Jerusalem. Corpus 21 managed to penetrate through ‘Ain Arik up to Beitunia, on the outskirts of Ramallah.

On June 19, 2015,  Danny Gonen, a 25 year old youth, was murdered here while he was hiking with a friend Nathanel. He was shot point blank by a terrorist.

In August 2019 a girl was murdered here, and her brother and father were wounded, after a bomb blew up at the entrance to the pool.

Due to security reasons, it is mandatory to contact the security officer of the region prior to the visit. A sign is posted on the entrance to the dirt road from the junction.

The valley north of the site is called in Arabic: Wady el Kelb (‘Valley of the dog’). 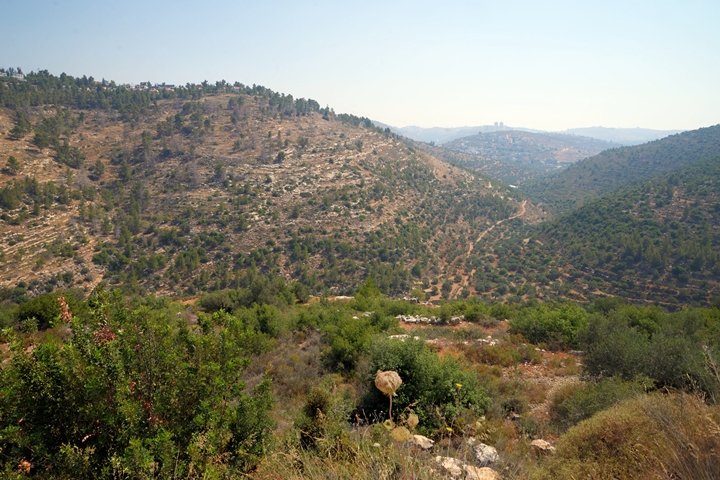 Dolev, a Jewish community established 1983, is located to the north of the valley. It has a population of 1500 residents (2018),  and is named after the stream of Dolev, that flows on its north side. Dolev is the Hebrew name for a tall tree (Platanus orientalis, Old World Sycamore) that grows in the stream. In Arabic the name is similar – Dilb, Dilbeh – as it appears on the PEF map. 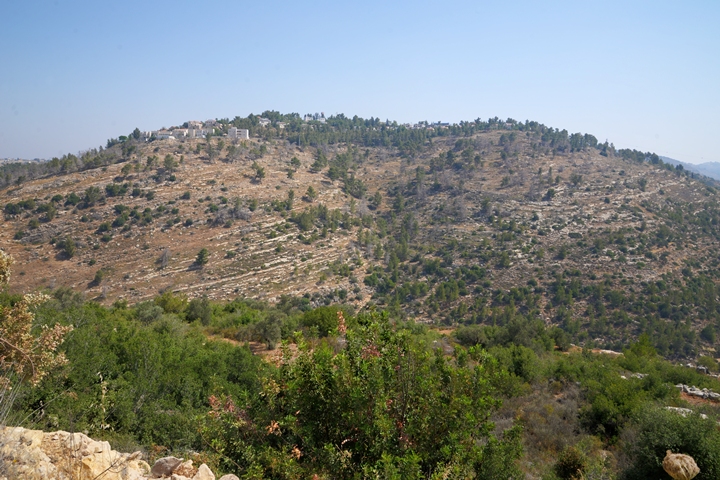 (b) The orchard (Bustan Ein Bubin)

At the end of the dirt road is a valley with a garden -the Bustan of Ein Bubin. On the far background, on a hill above it, is Khirbet Rubin – remains of a Jewish village of the first and second Temple periods. 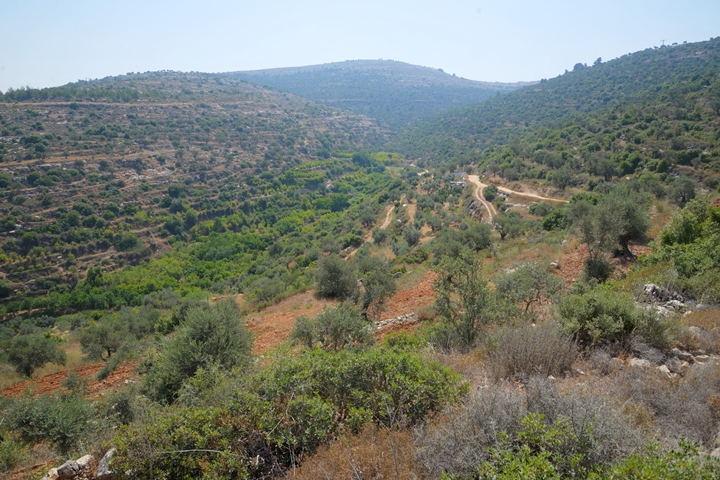 A Bustan is a farm near the house, which includes fruit trees, vegetables, and normally is watered from a spring.  It is a Persian word meaning ‘place of smell’, and was adapted in Hebrew and Arabic. 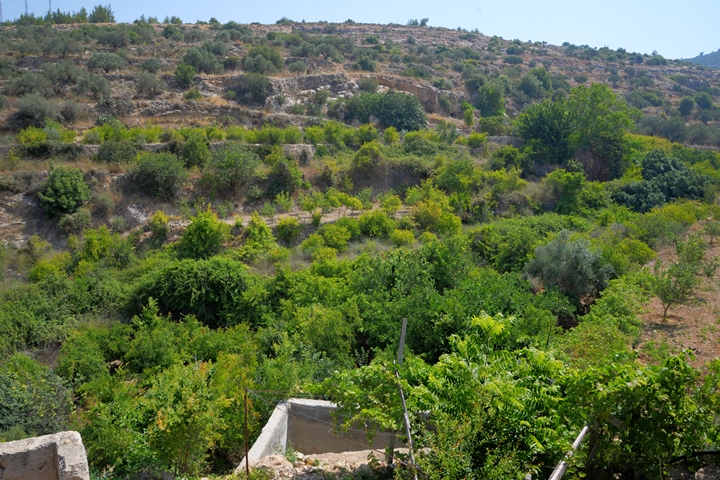 At the end of the road, after crossing the valley, is a paved entrance to the pool and spring. 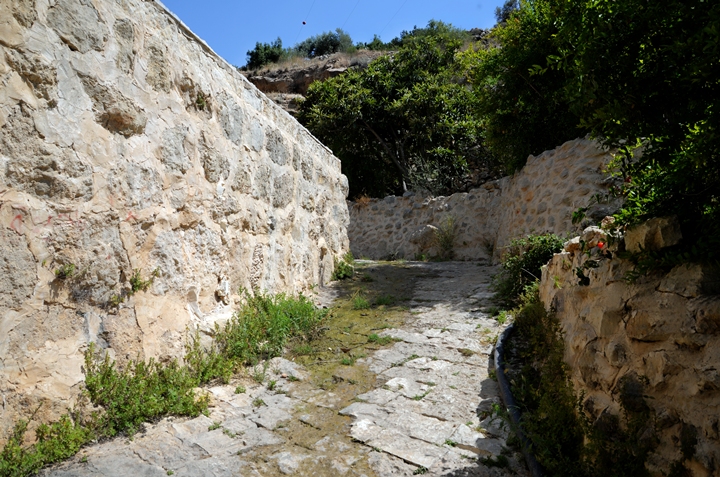 Another view of the pool, as seen from the inlet side: 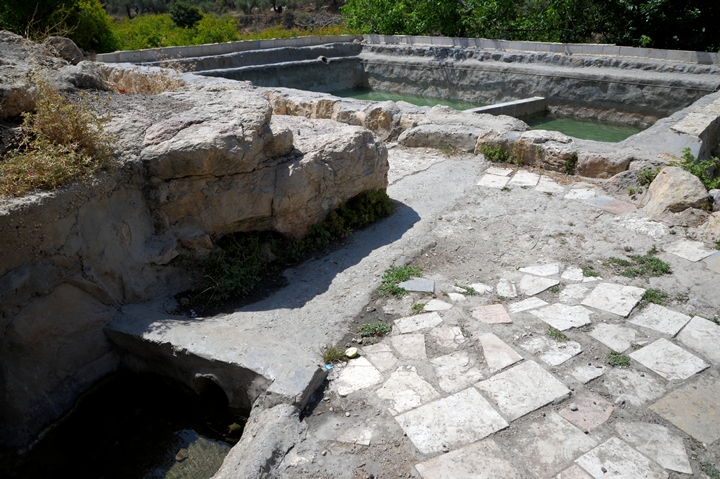 A view of the pool from the north side is in the next photo. This is one of the largest pools in the area.

The pool was originally built to water the orchard, but is also used to dip into the cool waters. In recent years the Jewish communities in Samaria, normally the local youths, take pride in repairing and reconstructing the numerous springs and cisterns scattered in the region. 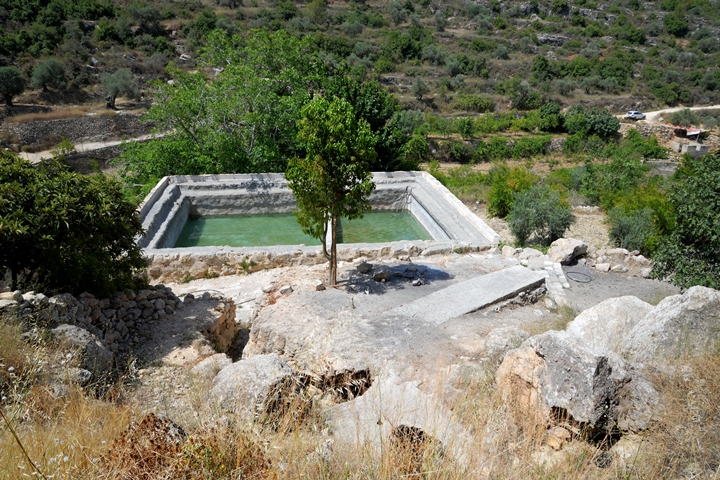 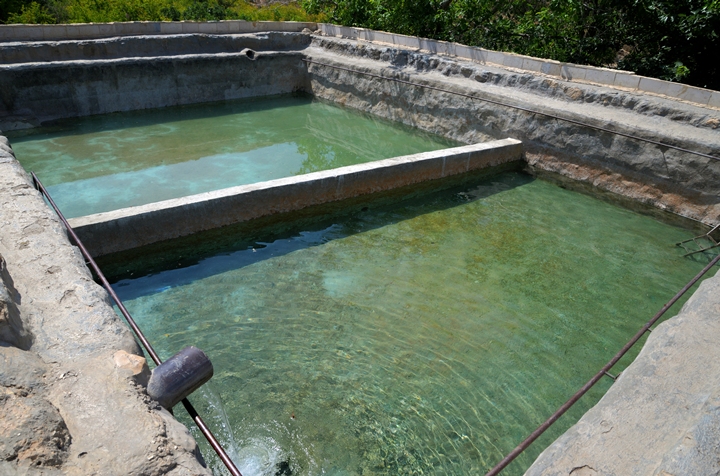 The pool is fed from the nearby spring behind the pool. 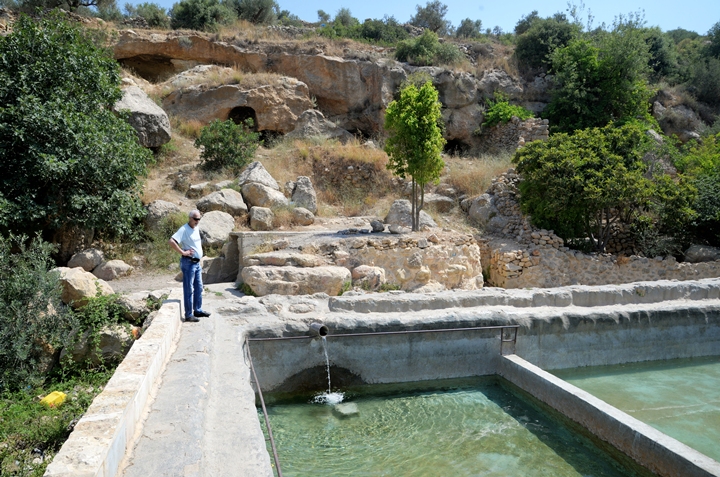 In this area of Samaria are hundreds of depression springs, due to the geological layout (high hills, deep valleys, aquifer layer formations) and the amount of rainfall. In the Bible the blessing to Joseph for his land of Samaria was abundant with springs and hills (Deuteronomy 33:13): “And of Joseph he said, Blessed of the LORD be his land, for the precious things of heaven, for the dew, and for the deep that coucheth beneath”.

The depression springs are located on the lower side of the foothills and along the valleys, where the water seepage meets the surface. Most of the springs are small, and were used to supply water to a family, a small village or an orchard (such as this case).

A layout of a depression spring (Hebrew: Ma’yan Shikhva) is illustrated here, with a cross section of the geological layers on the right side. During winter the rain water penetrates into the ground through a layer that allows the water to seep in, but then is blocked by a hard blocking layer. The ground water then builds up above the blocking layer at a lower height of the hill. At that level there is is usually a line of trees that root down to the ground water.  The ground water then finds itself out as a small spring, slowly flowing out at the zone of seepage where the ground water table meets the surface. The spring water can also be collected in a pool, then used for water supply to the village, or used to water the orchard and crops in the valley.

The Bubin spring flows into the pool from a tunnel. The edge of the tunnel is covered by a modern structure. 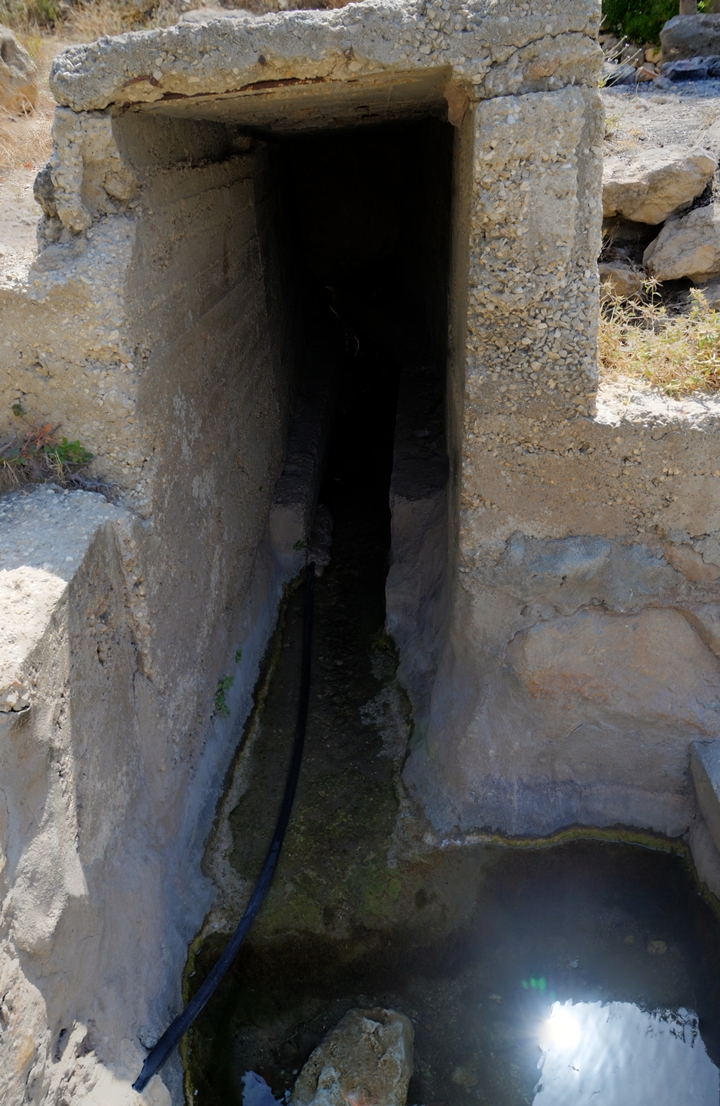 Just above the spring, on the foothill, are two caves. 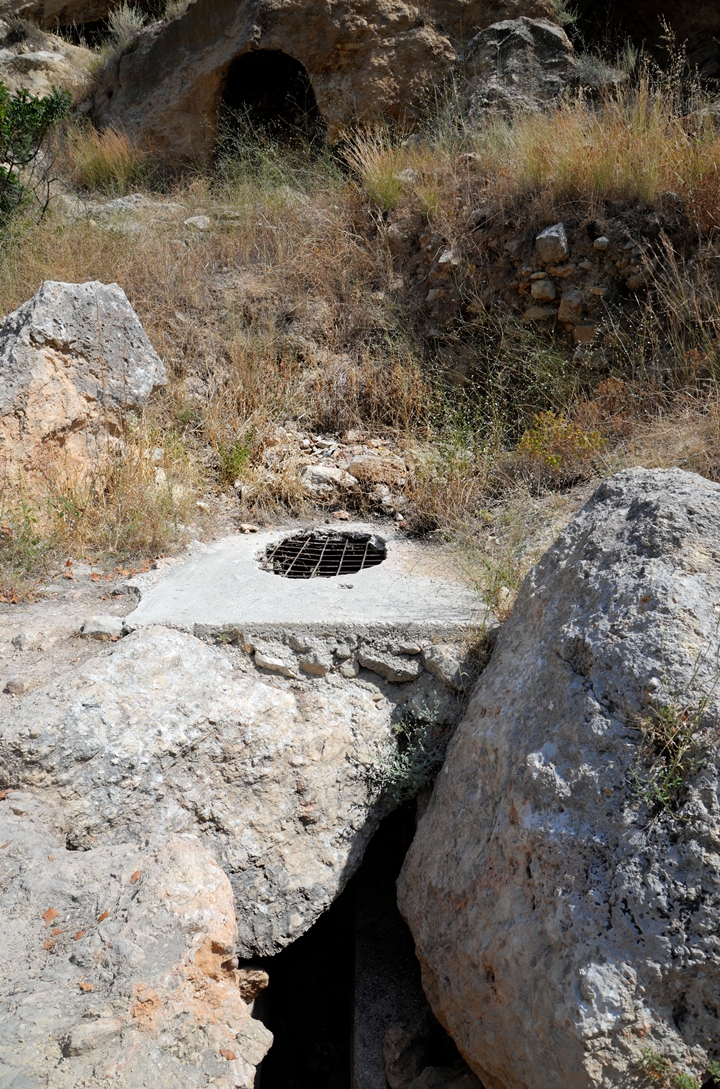 The caves are used for shelter. One of the caves was used as a columbarium (housing structure for doves and pigeons). 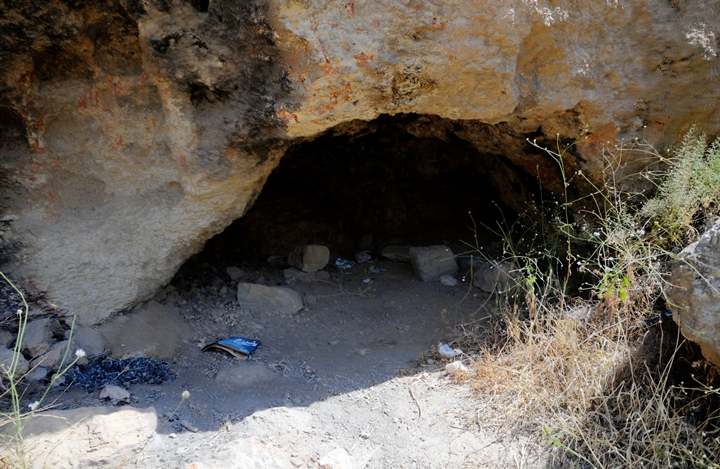 A path leads up to the ruins of khirbet Rubin, located 700m to the east at an altitude difference of 130m. 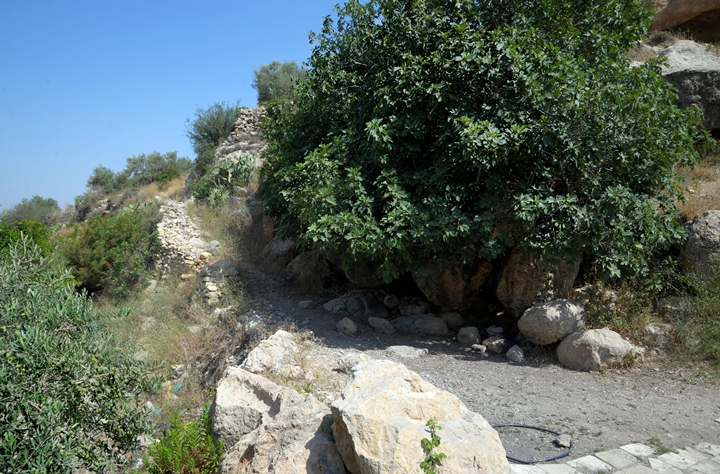 This YouTube video shows a flight over the site, commemorating Danny Gonen, a 25 year old youth who was murdered here in June 2015 while he was hiking with a friend. He was shot point blank by a terrorist.