In the Golan heights there are 6,000 prehistoric megalith tombs erected in the fields.

In the Golan heights area there are 6,000 (!) dolmens (prehistoric megalith tombs), which were erected at the Middle Bronze period (2400-2000 BC). The tombs may have been of nomad or semi-nomad tribes who buried their dead in central holy places.

The dolmens are based on large basalt stones. There are several types of dolmens, and many of them are based on a 3-tire structure: two vertical stones – or megaliths – and one horizontal stone on top – the table.

There are dolmens that are dug under the ground and create a covered burial chamber. Many of the dolmens are  covered by a pile of stones (tumuli, or small mounds) and others are encircled by a number of stones.

The dolmens were constructed outside of the village area. They were burial places for a single person or small family.  Some of the dolmens were reused for secondary burials long after they have been erected.

There are several clusters of dolmens in the Golan. Each cluster  has dozens or hundreds of Dolmens grouped in a small area.

These are the major areas:

For a map of these sites – check the green markers on the Golan sites map.

The photo shows the an example of a dolmen near a site called Givat-Bazak, east of Gamla. In the photo, a second dolmen is seen behind the front stones. In the fields around them there are more than 150 similar stone structures. 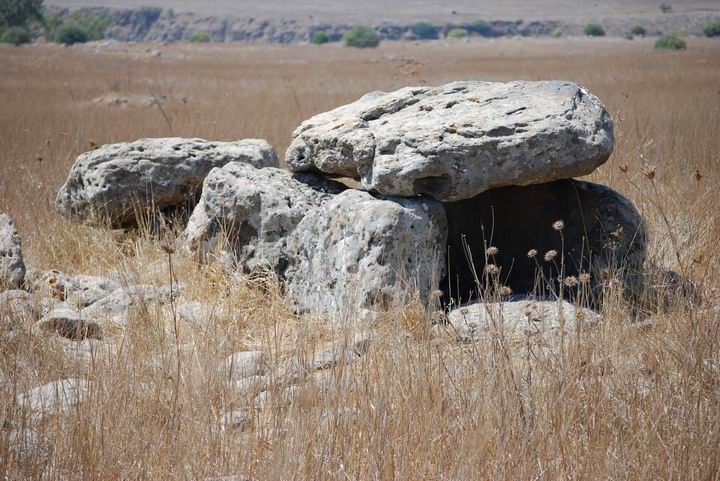 A second Dolmen is located nearby, which is also a 3-tire type: 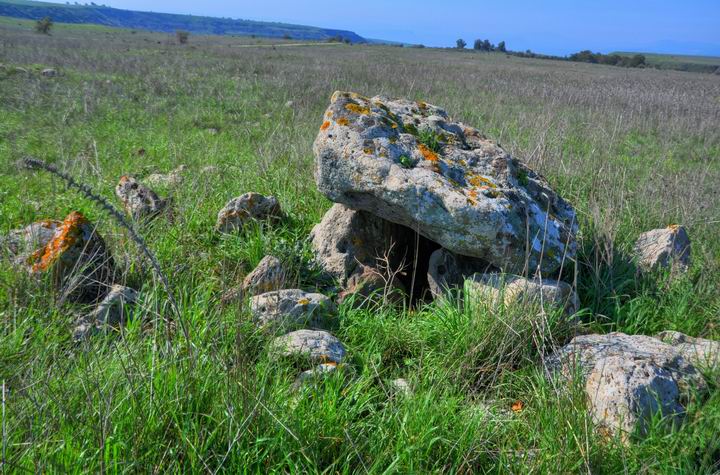 Another Dolmen is shown in the following picture, located along the cliffs above Daliyot brook, south of Givat-Bazak. In addition to the 3-stone structure, there are stones arranged around it. 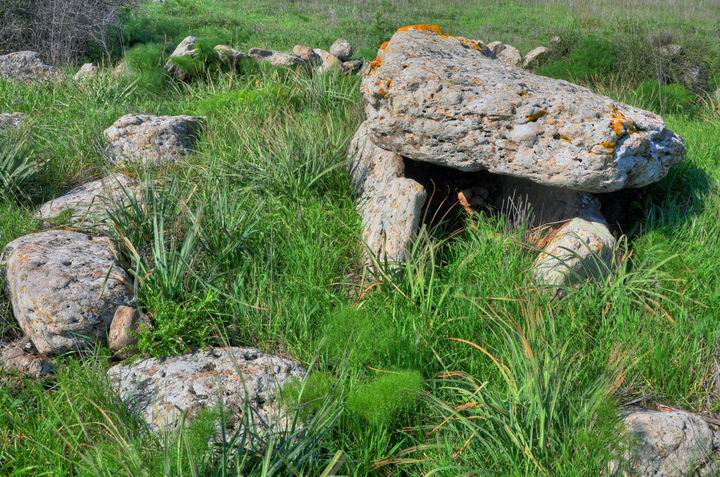 A closer view of this Dolmen: 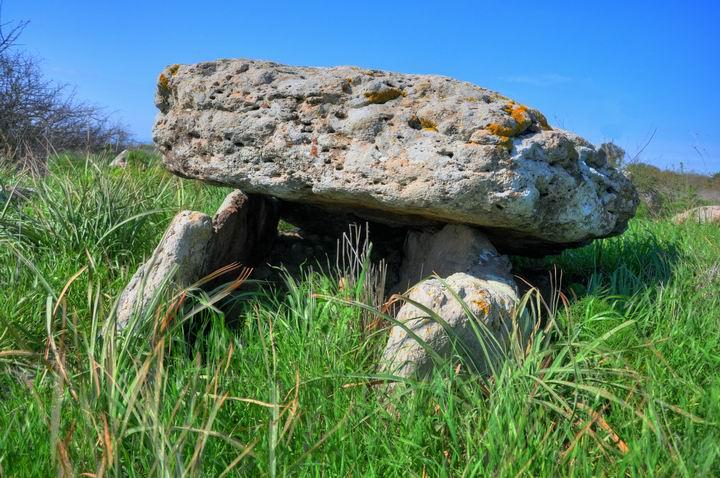 The following photo shows another example of the Dolmens on the south side of Givat Bazak. 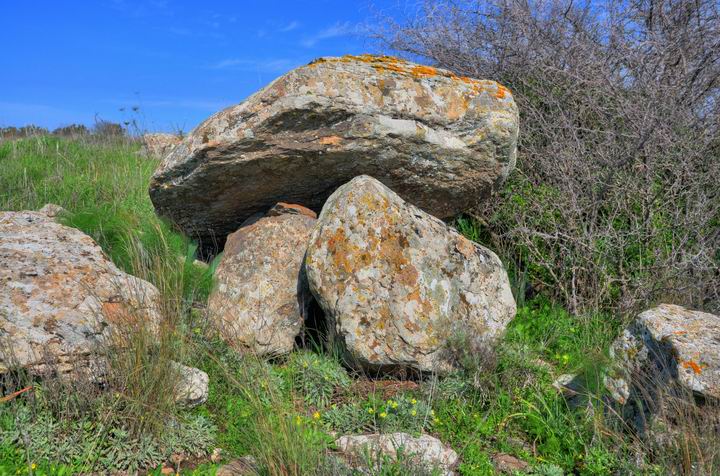 (b) Tumuli in Ma’ale Gamla area:

In the Golan heights there are hundreds of dolmens of the type called tumuli (plural for tumulus, or small mound). Dozens of these types can be seen in the south side of Daliyoth valley (seen in the background) on both sides of the the road (#869) from the sea of Galilee to Gamla. 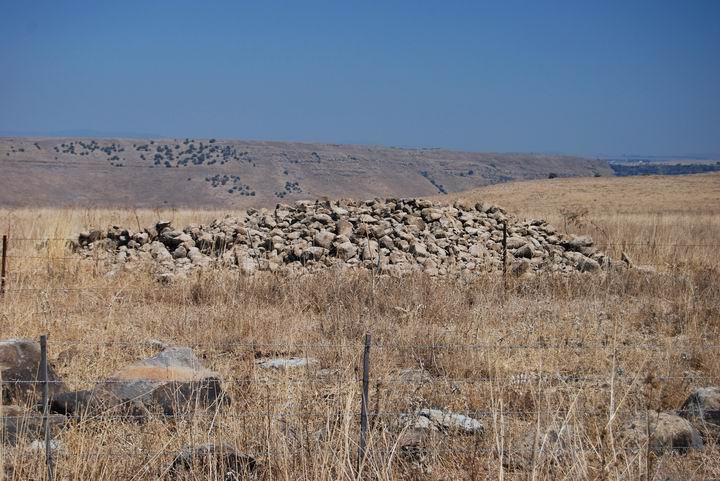 Some of the tumuli in the area are located in old mine fields, which remained from the Syrian presence before 1967. Perhaps this saves these dolmens. Caution: If you are traveling in the Golan heights, avoid crossing fences and stick to the official paths. Some of the mine fields are not properly marked. 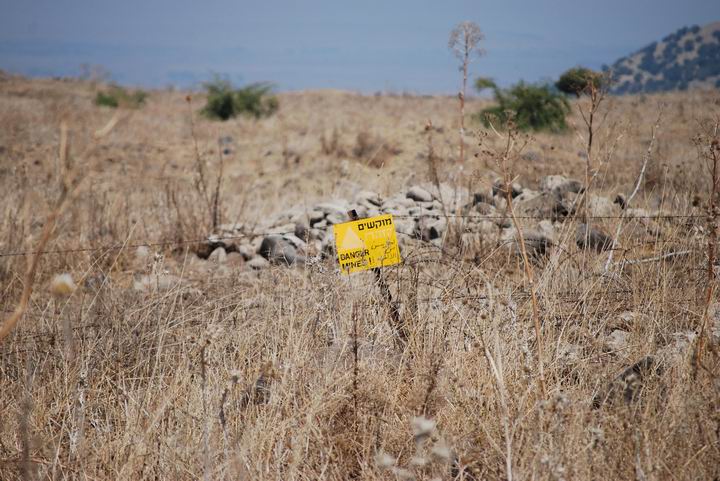 Another set of dolmens with tumuli can be seen near the Daliyoth junction (roads #869 and #808). The photo below shows a pair of tumuli (in the center and in the right background). Note that the field is burnt – which happens frequently during the summer, since the area is hot and dry. 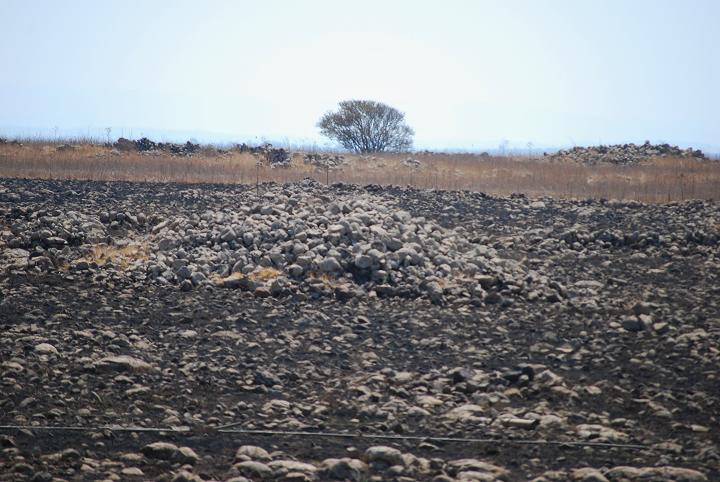 Near  Kefar Yehudiyeh (Yehudiye) is a large field with tumuli (small mounds), located north to the road that enters the village. These covered dolmens were constructed at the end of the early Bronze period. 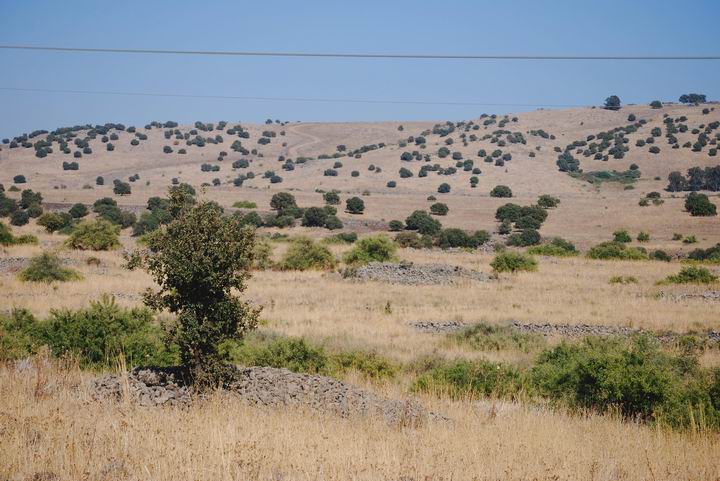 A rare Dolmen was found in the Golan, near Kibbutz Shamir. The unique feature was the discovery of carvings on its ceiling. The Hebrew announcement was shown in the IAA news clip (March 5, 2017).

This circular complex (a.k.a Gilgal Refaim) is the largest of all megalithic sites in the area, with 100 Dolmens and piles of stones on a ridge to the north of it. It started in the Early Bronze period and a second phase was in the Middle Bronze period. 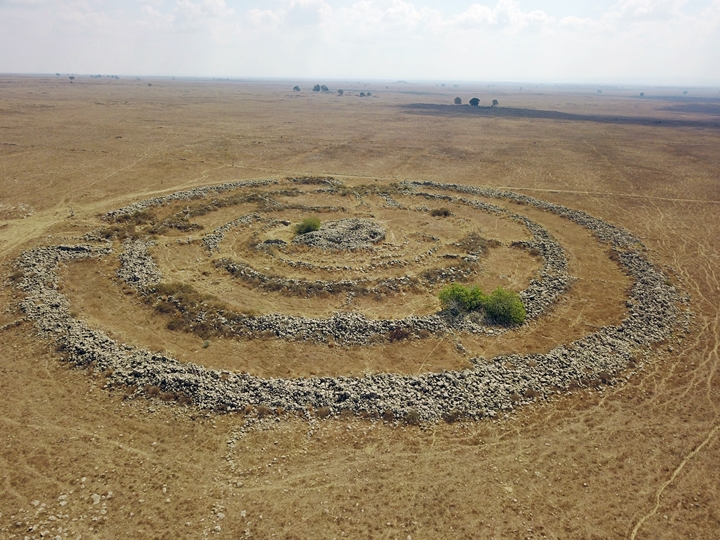 Dolmens are spread out in Europe and Asia. We present some photos that were received from India, captured in Jharkhand – a newly formed state of India – by Faiyaz Ahmad who is working on a research project on “Megalithic Civilization of Jharkhand”.

The following photo shows a 3-tier dolmen. This dolmen is situated in Chitarpur village  of   Ramgarh  district (Lat- 23 34′  and Long 85 39′). According to Ahmad’s study, this is a single chambered memorial dolmen (Megalithic monument) built by the Asur tribe in 800 BC, which is much “younger” than the Golan dolmens. 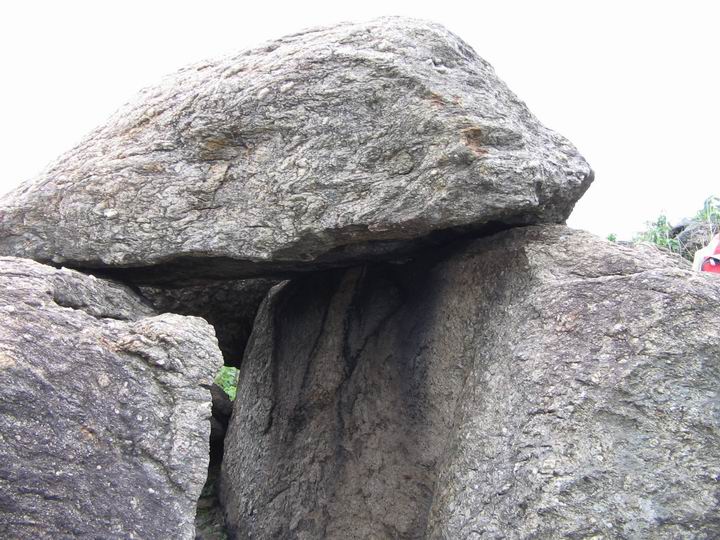 The photos are copyright of Faiyaz Ahmad and displayed with his permission.

The next photo shows a tumulus – pile of stones covering the dolmen. This is located in Honnah village of Ramgarh district ( Lat- 23 32′  and Long- 85 40′). After his study of artifacts found in this site, it is clear that this tumulus (also called cairn) was made by the Munda tribe in 600 BC. 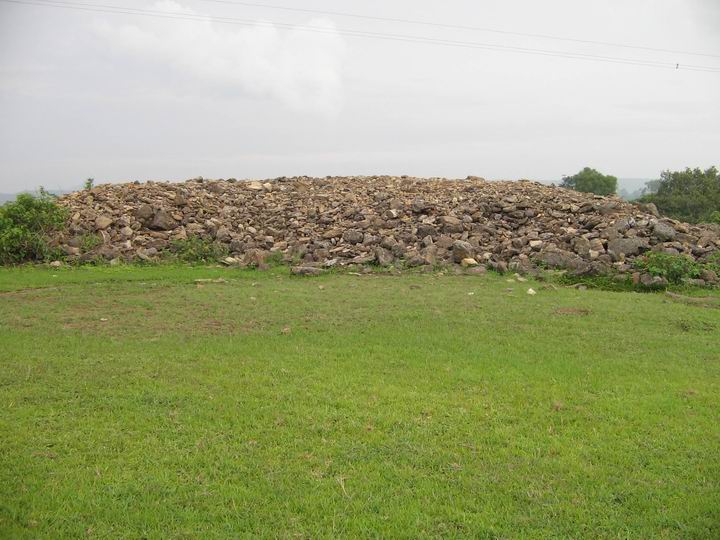 This Biblical text is the words of Bildad the Shuhite who argued with Job about the injustice of the world – that the sinners prevail. It may have nothing to do with Dolmens, but it does refer to a heap and place of stones.

“His roots are wrapped about the heap, and seeth the place of stones”.

Laurence Oliphant (1829-1888) was a British author and traveler who settled in Haifa. In his article dated Mar 31, 1885, Laurence tells his readers in the New York “Sun” about the mysterious dolmens. He visits the dolmens in a site east of the Jordan. He brings up interesting theories: