On Tel Burna (Arabic: Tell Bornat - the "mound of the hat") are ruins of a multi-period Biblical city. This impressive flat- topped mound rises to an altitude of 257m, 50m above the valley of Nahal Beit Guvrin which flows on its south and west sides.  Some scholars identify the ruins as the Biblical city of Libnah. 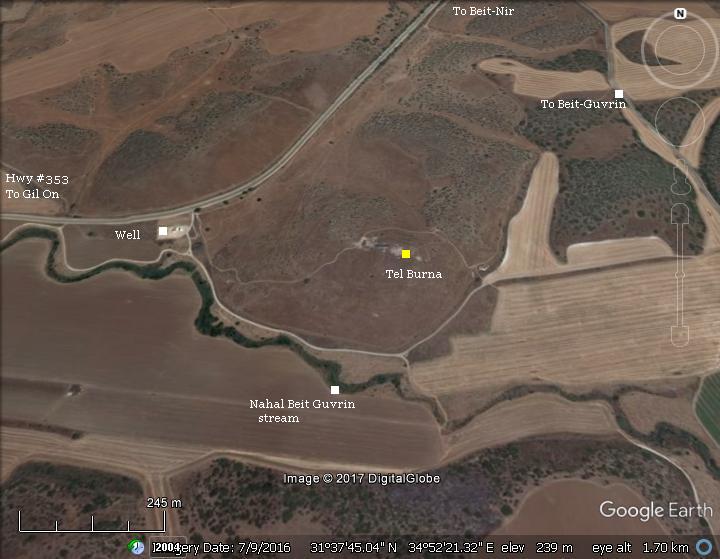 Settlement on the tell started in the 3rd millennium BC, based on the ceramic survey.  After then, the city was deserted for several hundred years. This follows a general pattern, as most of the EB III cities were depopulated in the Levant. It may have been a result of onset of drier climatic conditions, which resulted in insufficient resources to support the large cities. Most cities in the Levant disappeared and settlements were abandoned.

The Canaanite city once again was settled. It reached a peak during this period, spreading over a large area of 60 dunams (6 hectares).

The excavators identified findings related to domestic activities on the western terrace below the summit, which were dated to the 13th century BC (Late Bronze Age IIB).

During this period, the settlement has reduced in size. This may have been the consequence of the Israelite conquest by Joshua.

The excavators identify the site as Biblical Libnah. There are other candidates in the area for Libnah. However, recent excavations of Tel Burna are making the case of this identification more solid.

A map of the cities and roads of the Iron Age period is here, with Burna ("Libnah?")  marked as a red point in the center.  In ancient times, a major North/South road passed on its east side, connecting Maresha/Guvrin to Gath and the Shephelah cities. An westward road connected the city to Ascalon (Ashkelon). 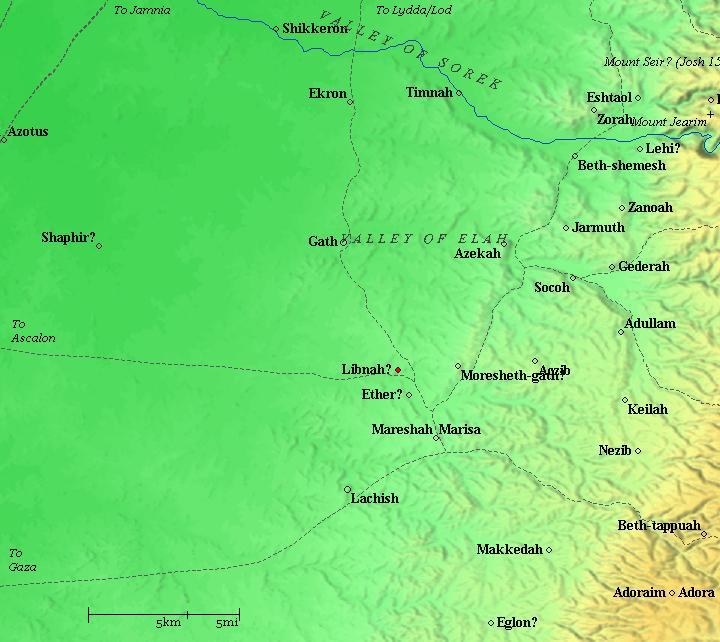 The cities and roads around Tel Burna (Libnah?)  - during the Canaanite, Israelite periods up to the Hellenistic period - Bible Mapper 3.0

During the Israelite Kingdom period, the city covered both the upper and lower areas, and was spread on a larger area of  80 dunams (8 hectares).  In addition to the expansion to the west of the summit, the excavators exposed remains of the Iron Age IIA period east of the summit.

During the reign of Joram, king of Judah, the city of Libnah joined the Edomite mutiny (2 Kings 8:20-22): "In his days Edom revolted from under the hand of Judah, and made a king over themselves ... Then Libnah revolted at the same time".

In the 12th century the Philistines arrived to the cities along the shore.  Tel Burna was on the border between the Philistines and the Judean Kingdom, and the excavators attempt to explore the relationships between the two rival states.  The Philistine control of the plains was initially  not a threat to the Israelites who dwelt in the hills of Samaria and Judea. However, towards the beginning of the 11th century BC the Israelites pushed westwards towards the plains, resulting with periodic clashes.     This ongoing conflict ended only after 400 years, following the Babylonian conquests at the end of the 7th century (604 BC).

Sargon II 's intrusion:  The Assyrian King Sargon  II (722 – 705BC) came to settle the Philistine mutiny. The first step was to handle the allies of the Philistines: in 720 BC Sargon fought the Egyptian army in Raphia, south of Gaza, and managed to repel them back to the south. The next step was to handle the rebel Philistines: in 712 Sargon's army crushed their cities  (Gibton, Ekron and Gath), then took Ashdod and its port city Ashdod-Yam (Ashdudimmu).

Prophet Isaiah writes about this campaign, when Tartan - chief officer of Sargon - conquered Ashdod and its seaport (Isaiah 20 1): "In the year that Tartan came unto Ashdod, (when Sargon the king of Assyria sent him,) and fought against Ashdod, and took it".   Isaiah's prophecy was backed by Sargon's own accounts of the events, as inscribed in his palace of Khorsabad (discovered by P. E. Botta in 1845). One fragment described the mutiny and specifically mentioned Ashdudimmu (Ashdod-Maritime):  "Ashdod, Gath, Ashdudimmu, I besieged, I conquered".

After the Sargon II destruction, the Assyrians  deported some of the Philistine population, replacing them with newcomers.

Sennacherib's intrusion (701 BC): Following the death of the Assyrian King Sargon  II, the Judean King Hezekiah mutinied against the Assyrians, joining other cities  in the area in another   attempt to free themselves from the Assyrian conquest.  Two Philistine cities joined Hezekiah's mutiny: Ashkelon and  Ekron. Hezekiah crushed the other Philistine cities that refused to join the mutiny (2 Kings 18:8): "He smote the Philistines, even unto Gaza, and the borders thereof, from the tower of the watchmen to the fenced city".

During the late 8th Century there is evidence of a Judahite presence in Burna/Libnah.   A LMLK seal ("L'melekh" - "belonging to the king") were found in the excavations, which are dated to Hezekiah's times. Therefore, it can be assumed that Hezekiah fortified Burna/Libnah as preparations to the Assyrian intrusion.

The Assyrian army came in 701, led by Sennacherib son of Sargon II  (2 Chronicles 32 1): "After these things, and the establishment thereof, Sennacherib king of Assyria came, and entered into Judah, and encamped against the fenced cities, and thought to win them for himself". The Assyrians first handled the rebelling Philistine cities and then confronted the Egyptian army that supported the mutiny.

Isaiah reported that Libnah was conquered by Sennacherib (Isaiah 37: 8):

"So Rabshakeh returned, and found the king of Assyria warring against Libnah: for he had heard that he was departed from Lachish".

Following the Assyrian destruction, the city of Burna/Libnah continued to be settled, as 100 years later King Josiah - father of Zedekiah - marries Hamutal of Libnah (2 Kings 24:18):

"Zedekiah was twenty and one years old when he began to reign, and he reigned eleven years in Jerusalem. And his mother's name was Hamutal, the daughter of Jeremiah of Libnah".

The archaeologists unearthed sections of the Iron Age casemate wall that surrounded the summit. In addition, they exposed a silo on the summit, dating it to the end of the Iron Age  at the times of King Josiah.

During the Persian time there was some presence in the city, although limited in comparison to the Iron Age II.

Throughout the following Hellenistic, Roman/Byzantine periods there was limited activity on the site.

Eusebius Pamphili (better known as Eusebius of Caesarea), a 4th century Greek historian of the Church, wrote in his book "Onomasticon" that a village existed in Libnah (here: Lebna, Lobano):

"Lebna: Josue also besieged this and captured (killed) its king. Given to the tribe of Juda. Priestly city. There now is a village called Lobana in the area of Eleutheropolis. Isaia noted it also".

Conder and Kitchener surveyed this area during the Survey of Western Palestine (SWP) of the PEF in 1873.    A section of the survey's map, part of Sheet 20, is shown here, with Tel Burna (Tell Bornat) in the center.  Notice the Roman road that passed near the site, connecting Beit Jibrin (the red circle on the bottom right corner) to Tel es-Safi (Gath) in the north.

Tel Burna, first thoroughly surveyed in 2009, is excavated by a team headed by Dr. Itzhak Shai of Ariel University, and a professional staff of various institutes. Two seasons so far have unearthed impressive findings of the Late Bronze IIB period (13th century BC), Iron Age II (9th-7th century), and the Persian period. An Iron Age casemate wall surrounds the summit, and a square tower was built on it. A lower city is located to the west of the upper city. On the north east side is the Necropolis.

A drone captured this view from the south side.  The ruins cover the summit and the area around it. 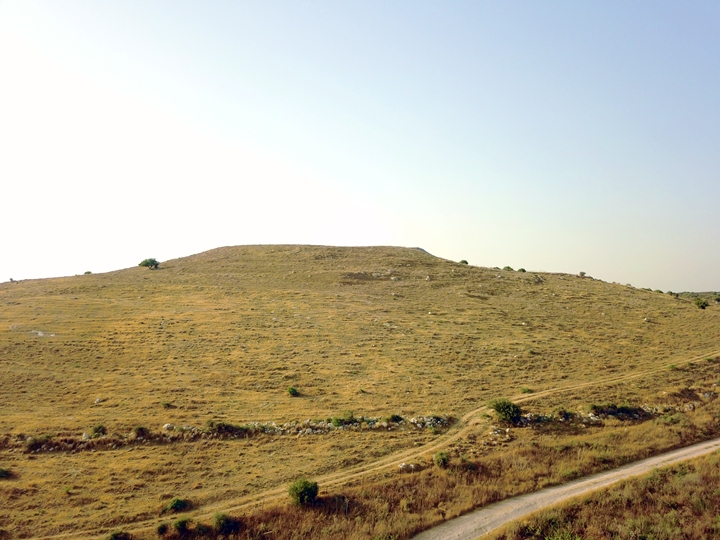 Another view from the east side, higher above the mound, shows a number of excavated areas. 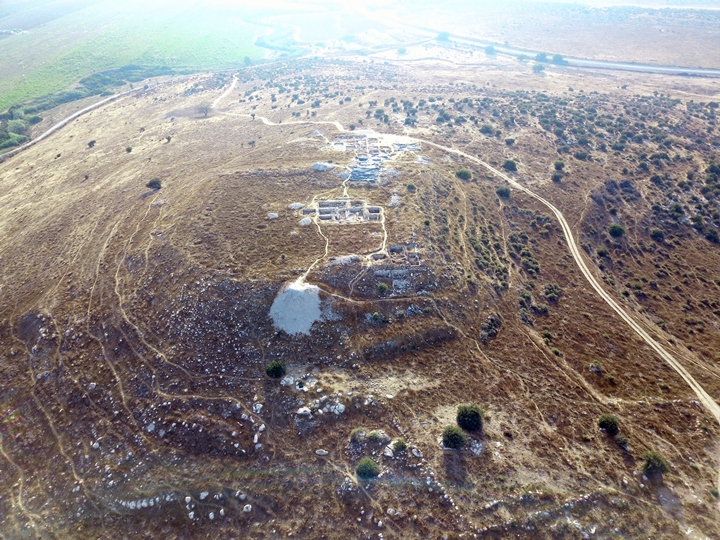 The following YouTube video shows a flight of a drone over the mound, starting from the valley side, then over the mound from east to west:

Another drone video starts from the east side, crosses the mound, then turns around the area:

Drone Aerial views - collection of Biblical sites from the air