Church of the Redeemer

An impressive German Lutheran church located near the Holy Sepulcher, built at the end of the 19th C over the ruins of a Crusaders church.

An impressive German Lutheran (Protestant) church located in the Christian quarter, near the Holy Sepulcher. It was built at the end of the 19th C over the ruins of a Crusaders period church.  From its tall bell tower are amazing views of the old city.

The church of the Redeemer is located in an area called "Muristan", near the Church of Holy Sepulchre (Sepulcher), and the Hospitallers' Church of St. John the Baptist. It is seen in the center of the Aerial view below.

You can point on the purple points to navigate to the selected site. 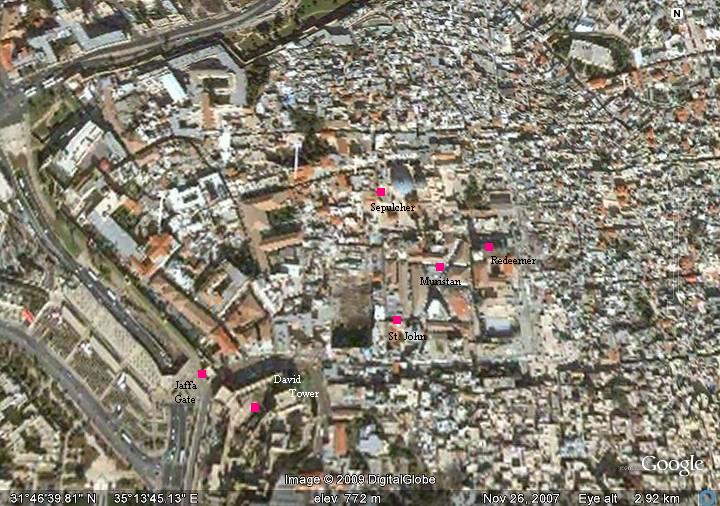 In the second C AD the Roman Forum was constructed in this area. This was the religious and political center of the Roman city of Aelia Capitolina (Jerusalem).

The ancient church of St. John the Baptist was built in the 5th C AD, and is one of the oldest in the Holy Land. It was dedicated to John the Baptist, and it is possible that the church presented some of St. John's relics, including fragments of his skull. According to Orthodox tradition, his head was buried in this church.

The church, which is located nearby, was destroyed during the Persian or Arab conquest (7th C).

The Italian merchants from Amalfi established in the first half of the 11th C, during the Arab conquest,  a Hospital and Church  ("Santa Maria Latina"). They added later another Church ("Santa Maria Maggiore" - Saint Mary Major - Mother of Jesus). These structures were built near the southern entrance to the Holy Sepulcher, in the area of the Church of the Redeemer. The arch of the Crusader gate is actually seen embedded on the north side of the Church of the Redeemer, which was built over its ruins.

Monks from the Benedictine order (Order of St Benedict) tended the sick and wounded warriors. This group evolved into a new local group that combined the religious zeal together with the Crusaders military life.  The order, officially established in 1113, named their order after John the Baptist, and were called the "Knights Hospitallers of St. John", or commonly known as the Hospitallers.  At the 11th C they purchased and renovated the nearby church and monastery of St John the Baptist, and their living quarters and the hospital structures were located around the present site called "Muristan"  which is based on the Persian name for "hospital".  (You can see more about Muristan in another page).

The "Hospitallers quarter" area was ruined after the Mamlukes conquest (1267), and remained at this stage until the late Ottoman period (19th C).  Some of the monks continued to live in the ruins of the nearby monastery of St John. In 1839 the monastery of St. John the Baptist was renovated by the Greek Orthodox church.

The photo below shows the structure which was built on the eastern side of the Muristan market - the  Church of the Redeemer. 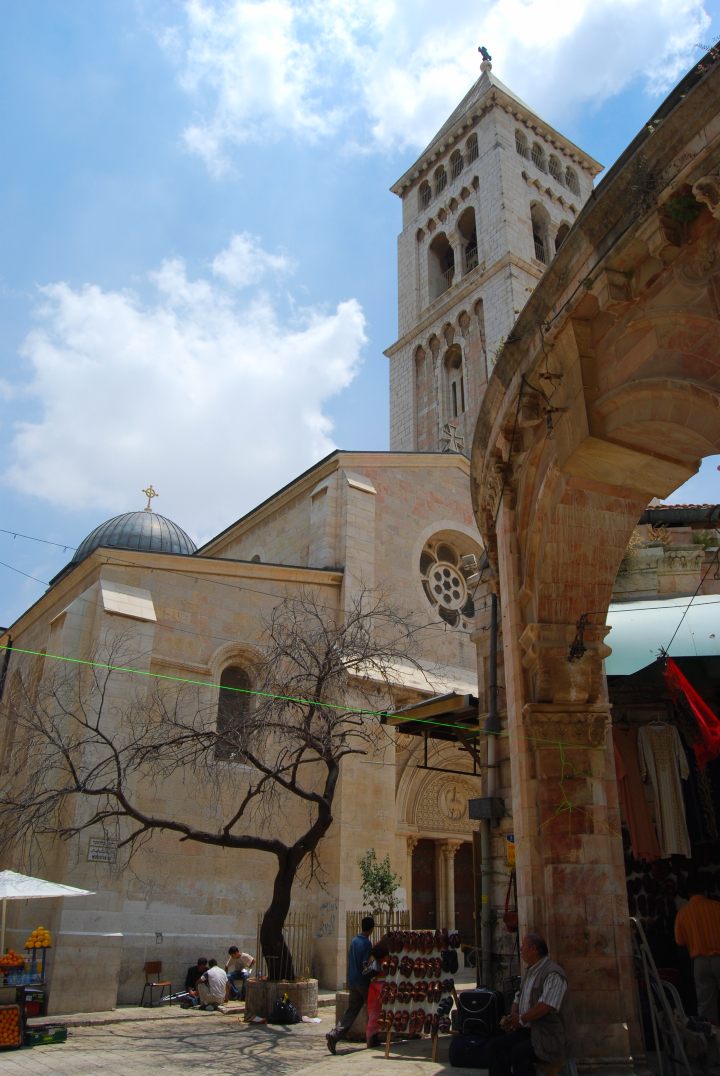 The entrance to the church, facing the west (Muristan street), is seen below. The Christian symbol of the lamb of God is seen above the door. It is a common Lutheran icon, which is based on the verse (John 1, 29): "The next day John seeth Jesus coming unto him, and saith, Behold the Lamb of God, which taketh away the sin of the world".

On both sides are common Prussian symbols -

Left side - an eagle with folded wings a German imperial sign, adapted in the 9th C AD by Charlemagne, the first Frankish king to gather the German Peoples into an empire, who placed a statue of an eagle on top of his palace.  Since the 12th C the eagle represented power and unity and was incorporated on the German coat of arms.

Right side - The Maltese cross, a type of cross which was the symbol of the Crusaders orders of St John. 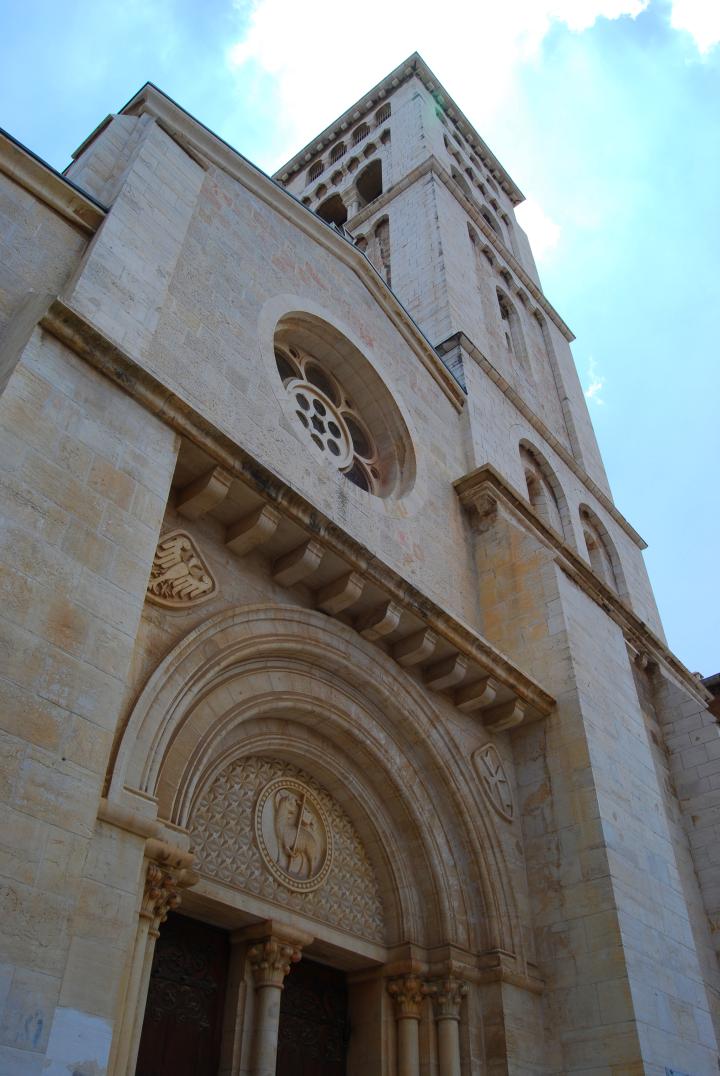 The architect of the 19th C church was the Berlin architect Friedrich Adler (1827-1908), who designed the church in a neo-Romanesque style. In the new church he incorporated ruins of a Crusaders period church - Santa Maria Latina - and other Crusaders elements that were collected among the ruins. The Crusaders-period  original arch is embedded inside the north entrance of the church, as seen below. 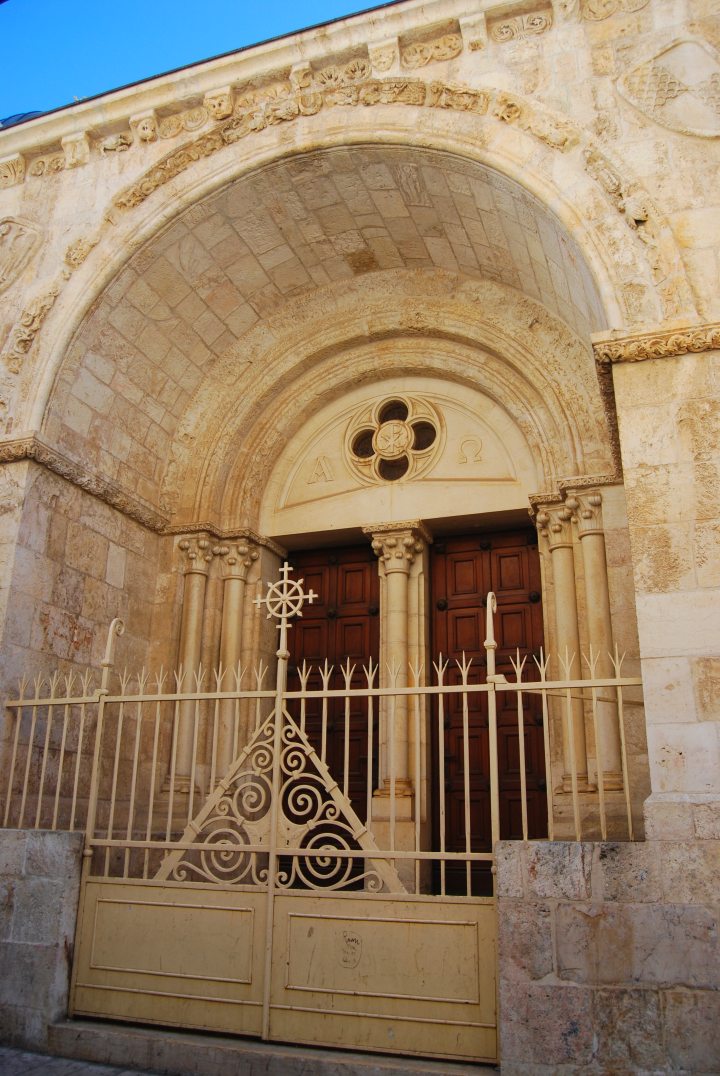 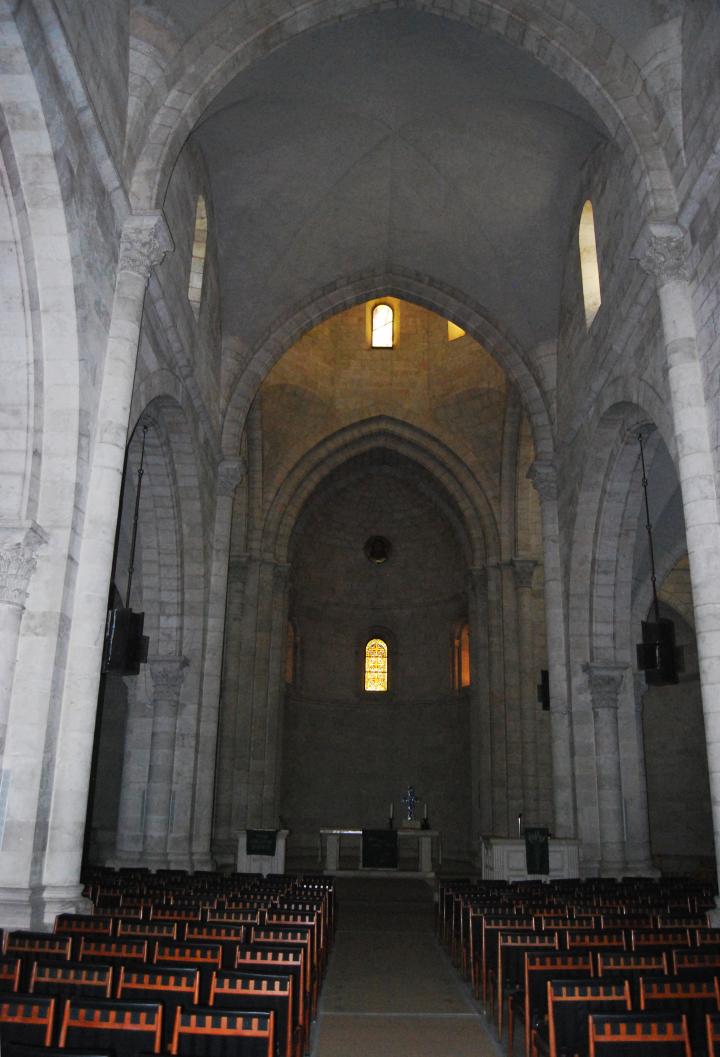 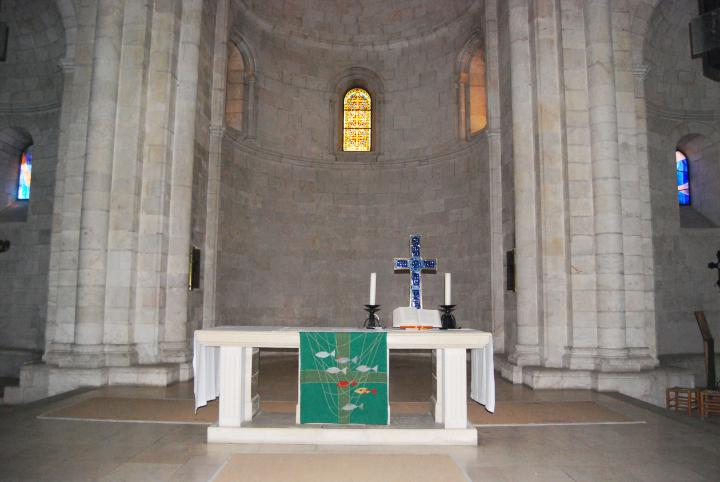 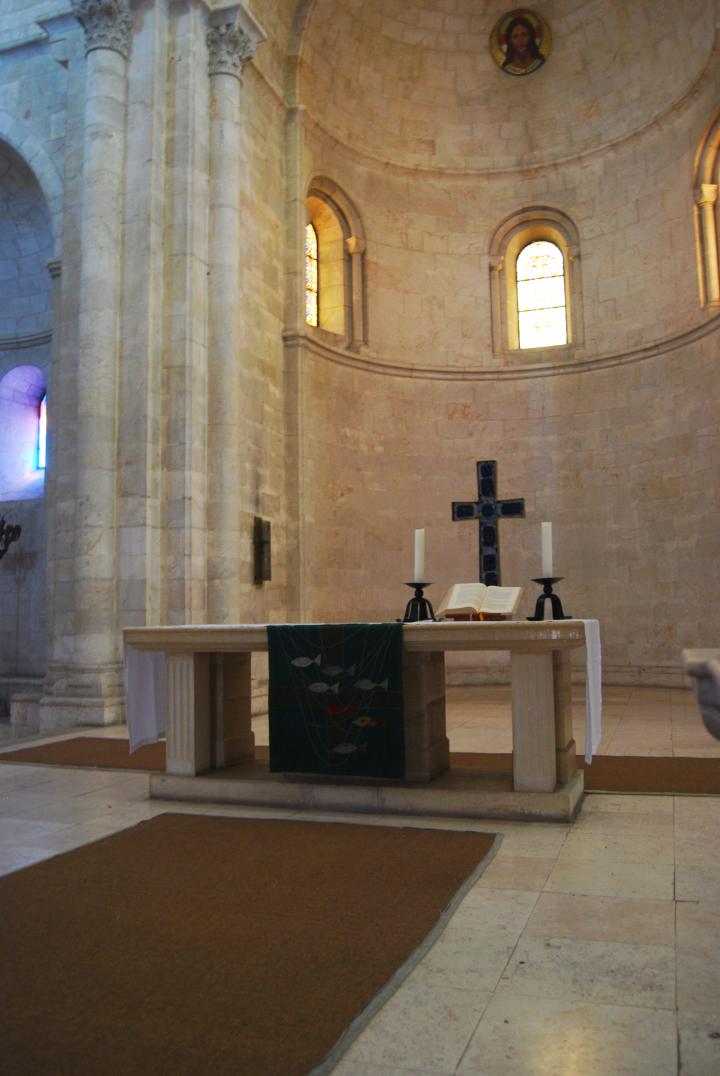 Under another altar table, an inscription bears the the date "Oct 22, 1898", a week before it was dedicated by the Kaiser. 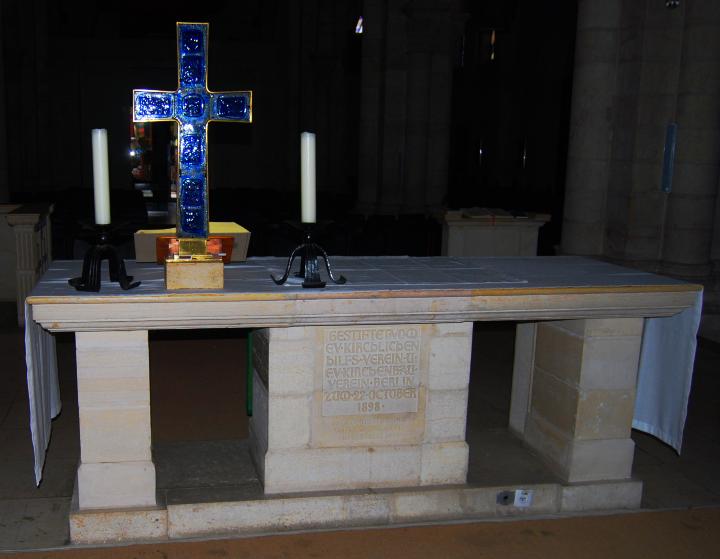 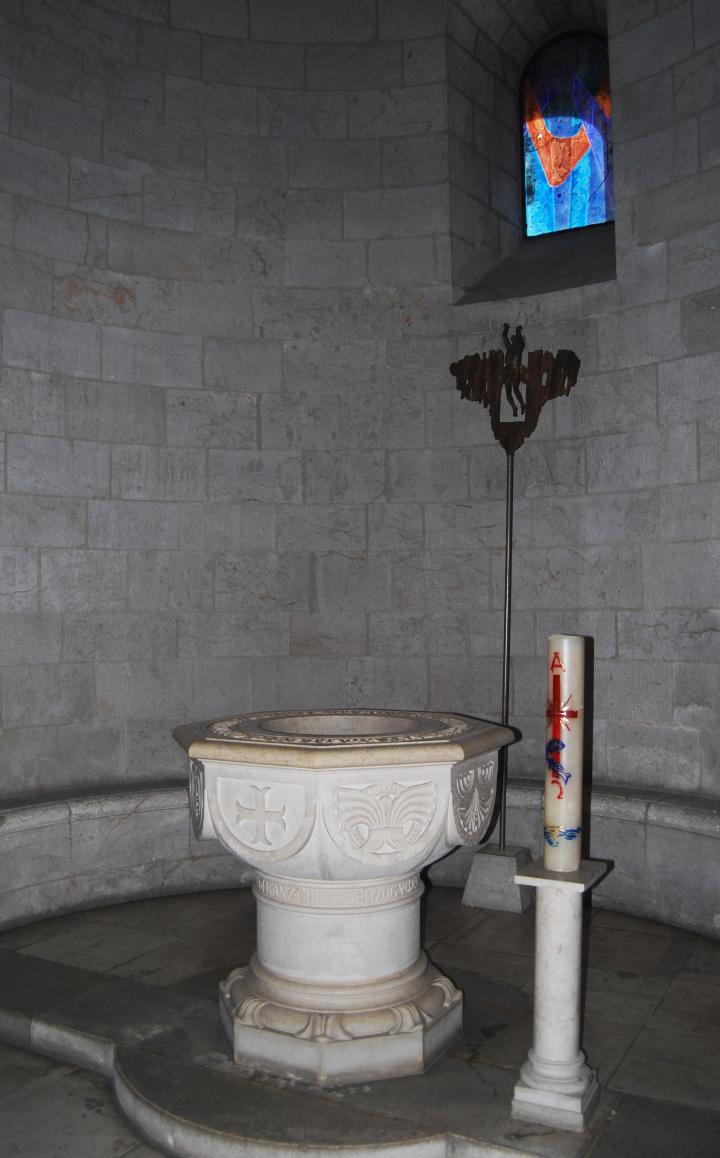 A view of the church and its bell tower is seen below. This white square tower is the tallest bell tower inside the old city - 48M high, 7 floors above the ground. 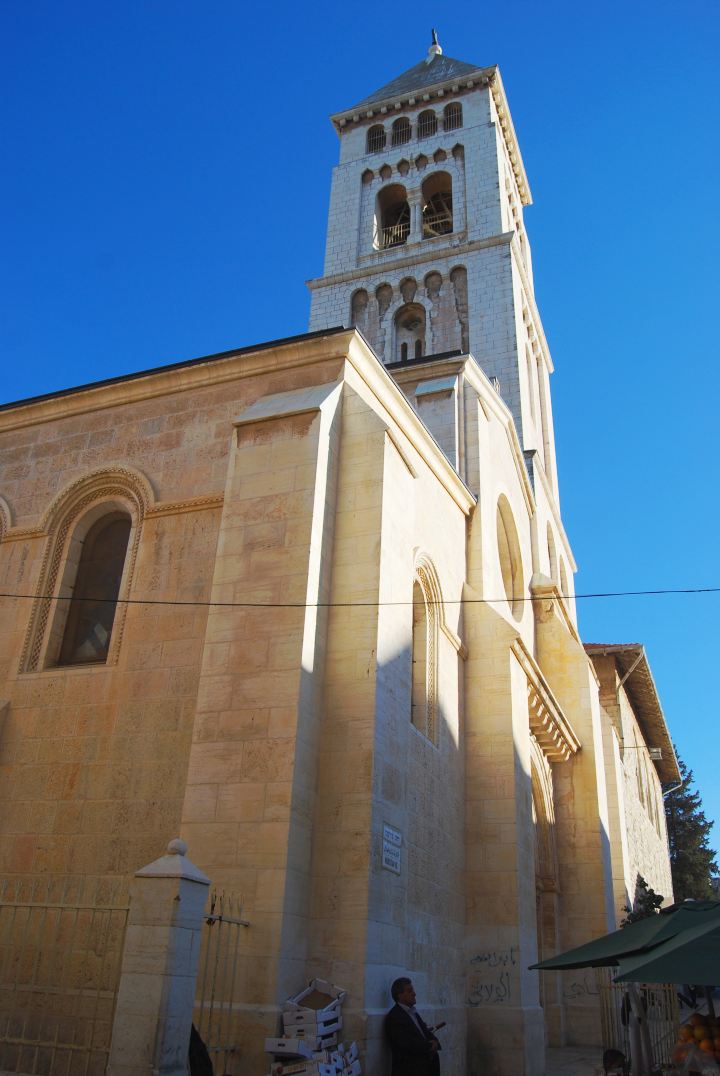 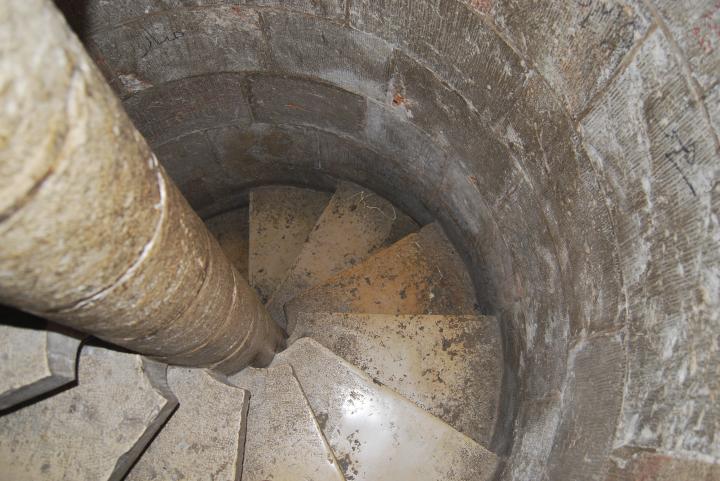 The large bells can be seen on the way to the top. It is best not to be here when they strike, so avoid being here exactly on the hour.... 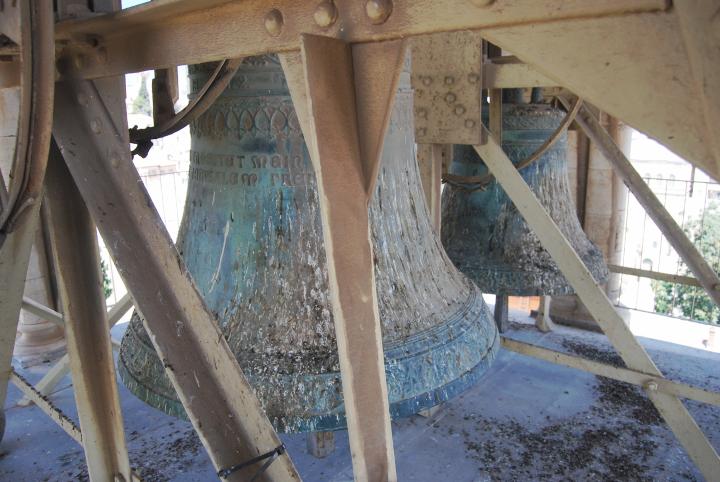 The top of the bell tower shows breathtaking views of the old city. Don't miss this unique view of Jerusalem which can be seen in four directions. A sample of the four views is seen below.

The photo below, towards the east, shows the grey dome of the Redeemer in the foreground, the Golden Dome of the rock in the far right,  and the area of Mount Olives behind it. The square bell tower of Augusta Victoria - the other Lutheran church which is located on the northern side of Mt Olives - is seen on the far left background. 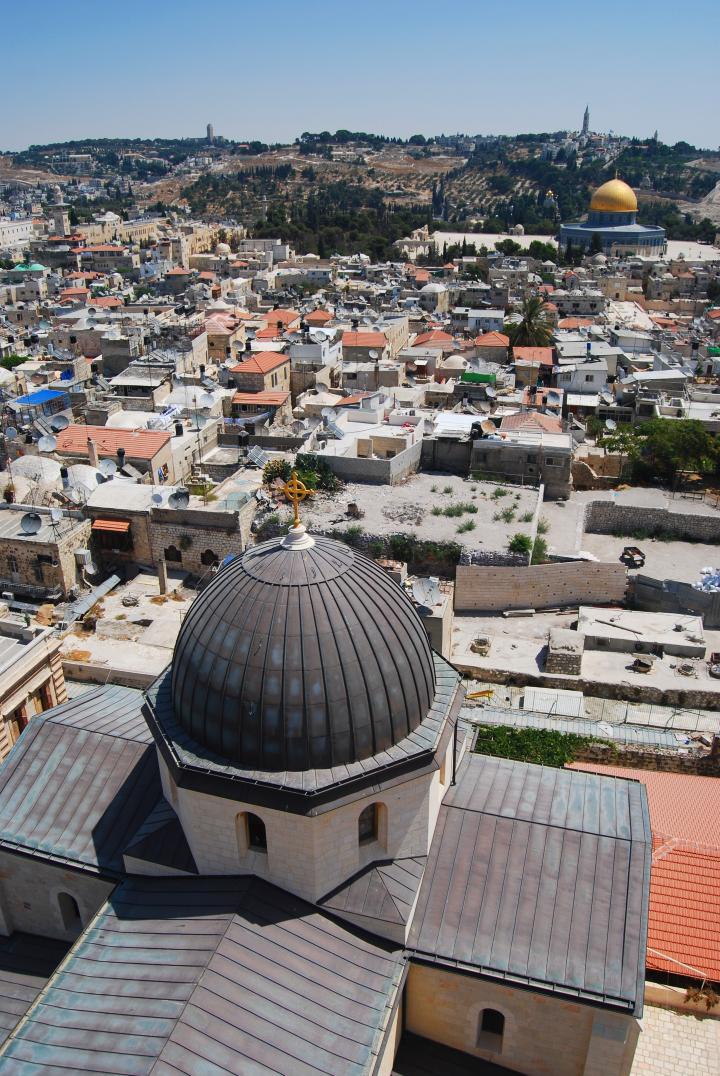 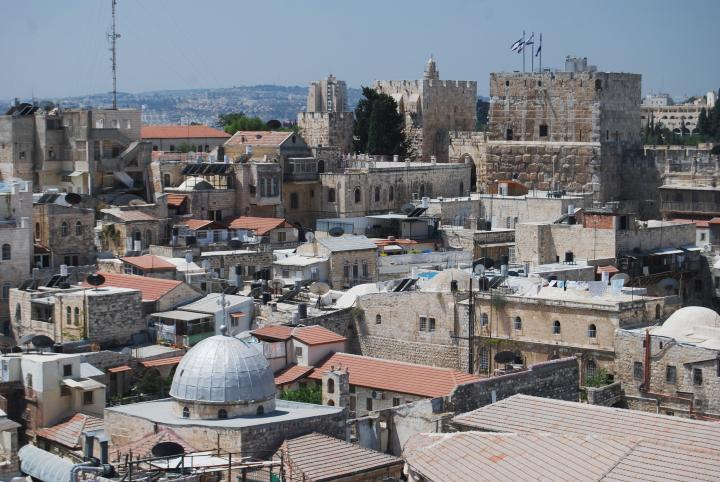 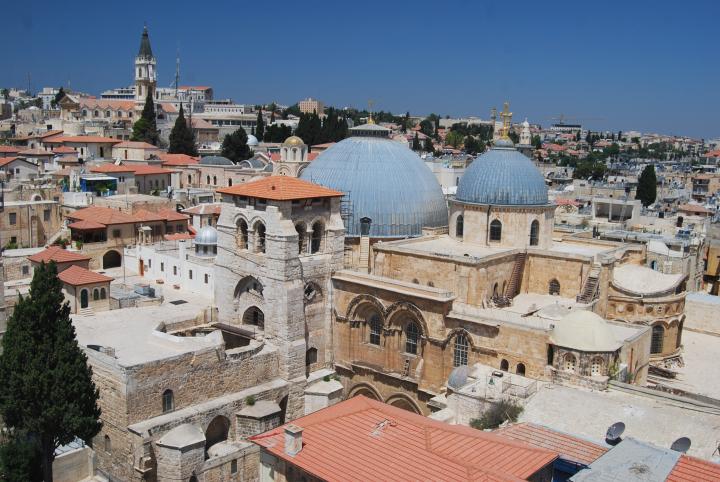 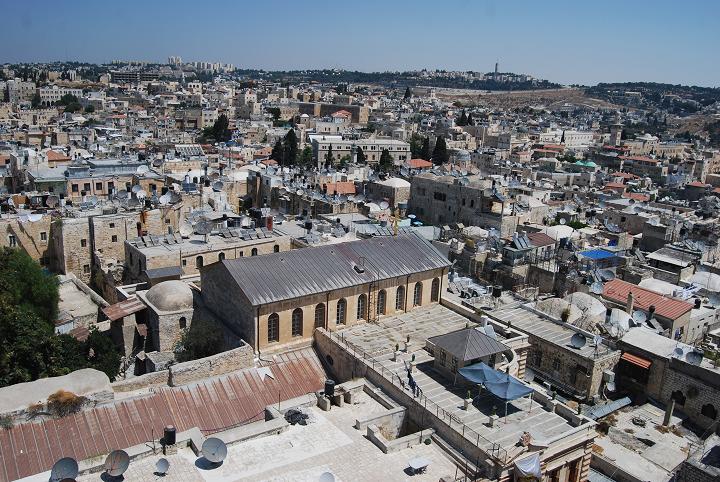