A national park with remains of a Crusader and Mamluke period fortress and a mosque, located on a hill above the eastern side of the valley of Hefer. The site was located near major ancient roads, and used to protect and offer services to the travelers along these roads.

The following aerial view shows the points of interest around the site.  It is located in the valley of Hefer (a section of the plain of Sharon), between Moshav Ometz and Moshav Gan-Yoshiya.

You can point on the yellow  squares in order to navigate to the selected point. 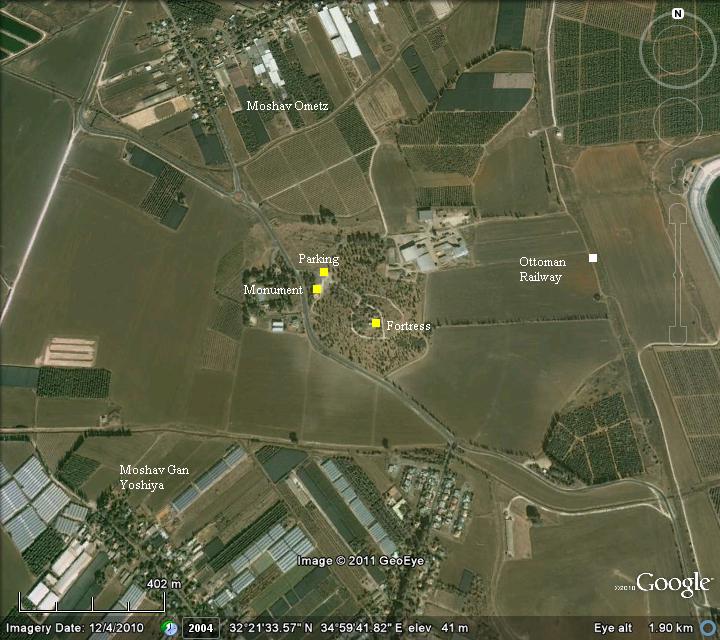 This place was also visited by the traveler  Benjamin of Tudela in 1160, who identified it with Biblical Keilah (although that site is now identified in a site south of the valley of Elah).

A Biblical map shows the area around Tel Qaqun during this period. Qaqun is strategically located near the north-south Via Maris, the ancient road that connected the regions north of Israel (Mesopotamia, Asia minor  and Syria), via the Megiddo pass, to the center of Israel and the south (Egypt).  Another route connected Via Maris to Samaria and Shechem in the east.

Qaqun is marked below as a red square, west of the Biblical city of Socoh (of Samaria). Socoh is mentioned in the Bible (1 Kings 4:10): "The son of Hesed, in Aruboth; to him pertained Sochoh, and all the land of Hepher". The land of Hepher is the area around Qaqun. 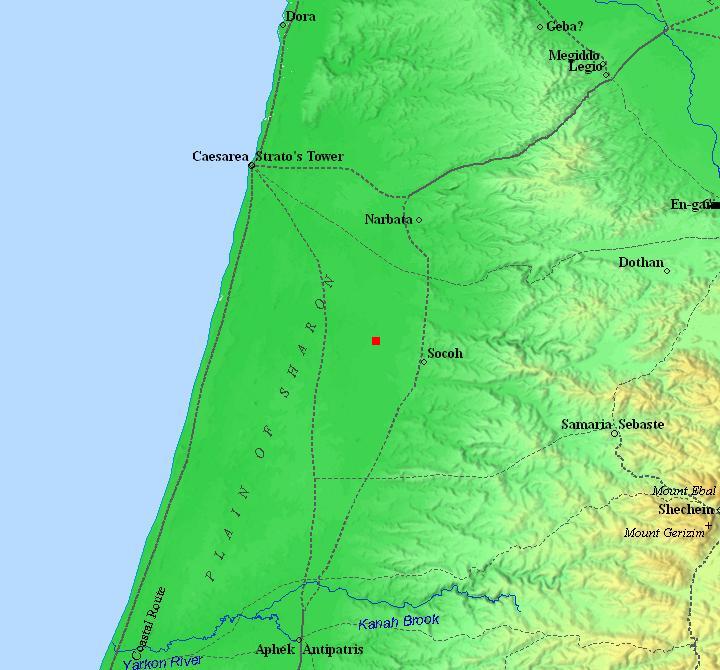 Map of the area around Qaqun  (based on Bible Mapper 3.0)

The Assyrians, the new rising empire, expanded their territory to the east. Shalmaneser  III was the Assyrian king who invaded to Israel in the first Assyrian intrusion (841BC). His forces reached the Galilee and Horan, destroying several cities such as Hazor. However, the Assyrians had to focus on wars in other regions of their empire, and left the area.

This site was captured and destroyed by the Assyrians. Assyrian artifacts were discovered here, including fragments of a stele of Sargon II which lists the cities he captured.

Tel Qaqun is at a strategic location - on the side of the Roman road from Neapolis (Shechem, Nablus) to Caesarea. This ancient road  passes through Wady esh Shair (Shechem stream, which flows into the Alexander stream), and continues to Jerusalem.  Another Roman road connected Caesarea and Legio (Megiddo) to the south (passing through Luddis-Lydia).

The Crusaders (1099-1291 AD) protected their pilgrimage route from Acre to Jerusalem with a series of forts and police stations. This site, named by the Crusaders as "Caco" (or "Chaco", "Caccho") was one of these fortresses.  The fortress was built in the beginning of the 12th C. It  was first mentioned in Crusaders texts in 1123.  Since it was a gateway along the main north-south road, the fortress had a strategic military importance. This important minor town also served the caravans, supplying water shelter and food.  Caco was inhabited by Syrian Christians, Frankish Knights and other settlers.

The Crusaders town was controlled by the Crusaders lords of Caesarea. These knights were of the Templar order,  a military-religious organization which was established in 1118, naming their organization after the temple: the guards of the temple. Their task, as defined by the pope, was to protect the pilgrims and patients that visited the Holy Land.

The knights of the Hospitallers also held property in Caco. The order, officially established in 1113, named their order after John the Baptist, and were called the "Knights Hospitallers of St. John", or commonly known as the Hospitallers.

Another Crusader castle  (Castrum Rubrum) is located 5km southwest in the ruins of Khirbet Burgata. This castle is known as the the "red-tower" (al-Burj al-Ahmar). The castle has a similar design as in Caco, but only its south wall has survived.

The Mamlukes were Turkish prisoners who were sold to the Sultan of Egypt, trained by him and served as his palace guards. In 1250 they seized the control of Egypt, and defeated the Mongols (1260).

The Mamlukes took Caco in 1265, and rebuilt the castle a year later.  The Mamlukes converted the Latin Parish Church into a mosque, and established a Khan (inn) to support their postal road from Cairo to Damascus.

The Crusaders tried to regain Caco in November 1271, but were defeated by the Mamluke leader Bybars. The Crusaders finally departed from the Holy Land in 1291, thus ending 266 years of their Kingdom.

Since the  Mamlukes were inferior in the sea and feared another Crusaders attack from the ports along the shore, they destroyed all the port cities. This shifted the focus of the trade route from the shore (through the ruined Caesarea)  to the inland route that passed through Caco, thus increasing its importance. Bybars also moved the administrative center from Caesarea to Caco.

The village at Caco (now Qaqun) provided road services, and became major station along their most important link - the Cairo-Damascus route - and a road to Nablus (Shechem). The Mamlukes used it as a fortress, a watch tower (to alert on a possible return of the Crusaders), a center for a district, and a post station.

The Mamlukes  controlled the Holy Land until the Ottoman period (1516).

In 1834 the Arabs of Palestine reacted to a new military draft policy and reformation changes, and revolted against the Egyptian rulers headed by Muhammad Ali, the reformer and founder of modern Egypt. In order to quell the uprising, the Egyptian Governor Ibrahim Pasha (son of Muhammad Ali) razed Qaqun, as well as other villages and cities. He later replaced its residents with Egyptian farmers and nearby villagers, who built stone and mud houses around the fortress.

The village was  examined in the Palestine Exploration Foundation (PEF) survey (1866-1877) by Wilson, Conder and Kitchener. The site appears on this map of 1878 in its Arabic form -  "Kakon". Several roads pass through the village, including the north-south road which was once the major ancient road connecting the north to the south.

Qaqun was one of the largest villages in the Sharon area. During the Arab revolt in the 1930s many Arab residents of the large village of Qaqan participated in sabotage of the railway and other properties. British and Jewish forces operated in the village to apprehend  the terrorists.

A drone captured this view from the north east side.  A path leads up to the entrance on the south east side of the castle. The parking area is seen here on the far right side. In the background is Moshav Ometz. 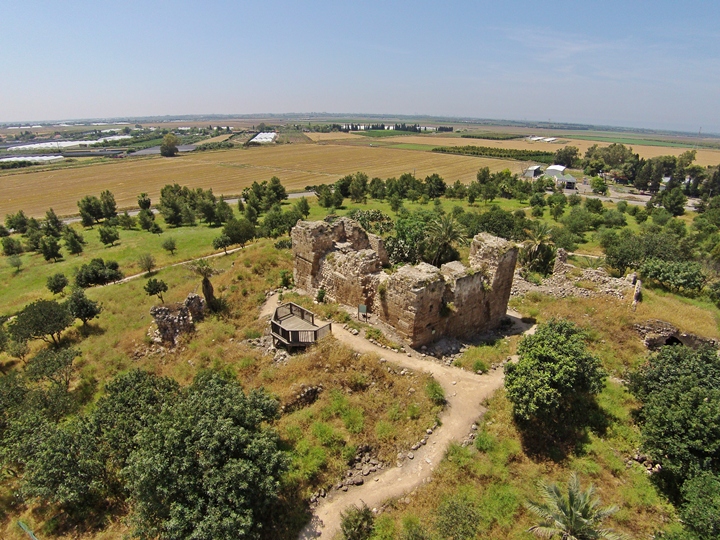 Another view from the north west side is shown in the next photo. In the right side of the background is Moshav Gan Yoshiya. 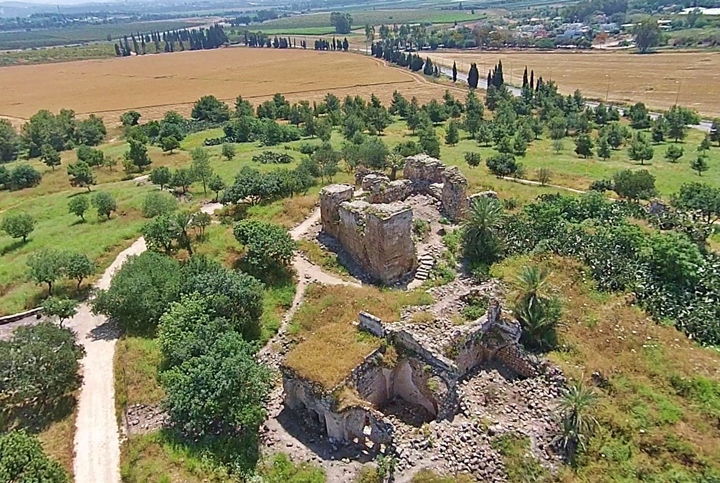 The Youtube video was also captured by the drone from the north west side, crossing the Donjon then turning around.

The photo below shows a ground view from the south-east towards Tel Kakun. On top of the hill, 52m above sea level and 25m above the fields around it, are the remains of a 14th C Mamluke period fortress, which was based on the 12th C Crusader fort. Around the hill are ruins of  a large Arab village, which was leveled in 1948. 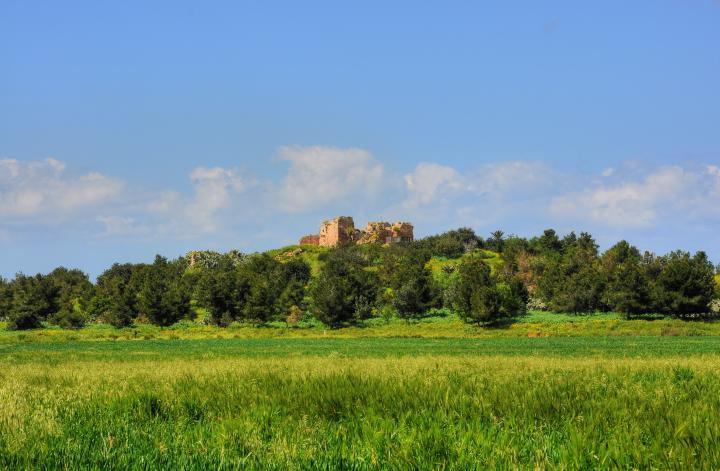 From the parking lot on the northwest side of the hill is the entrance to the National Park of Qaqun. 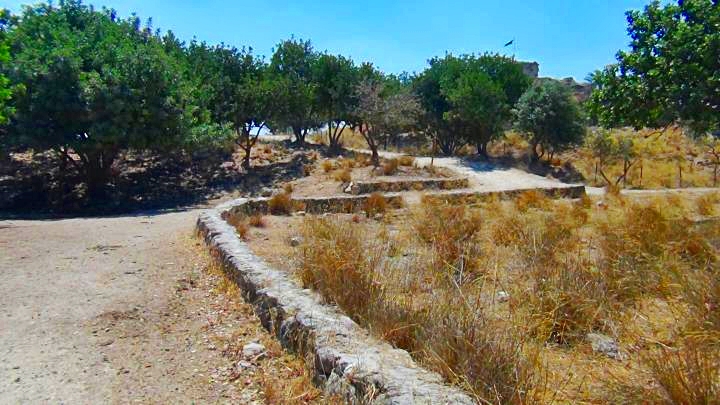 The Crusaders donjon (inner castle), located on the top of the hill, was built in the early 12th century. It is a rectangular shape (17.6m x 14.4m), fairly low (8.5m high) and stone vaulted throughout. The Mamlukes reconstructed the fortress in the 14th C, and dug a wet moat around it. The fortress in Qaqun may have been protected within an external enclosure, which is not seen today. 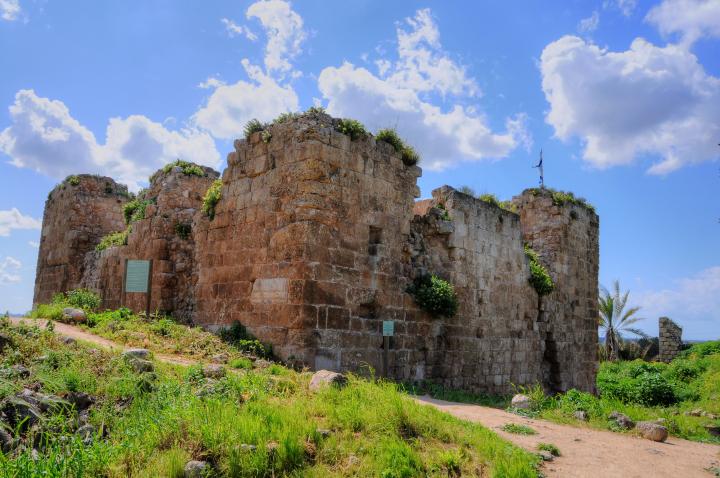 As seen on the eastern wall, the builders of the castle reused Roman/Byzantine stones, such as marble coffins, columns and milestones. 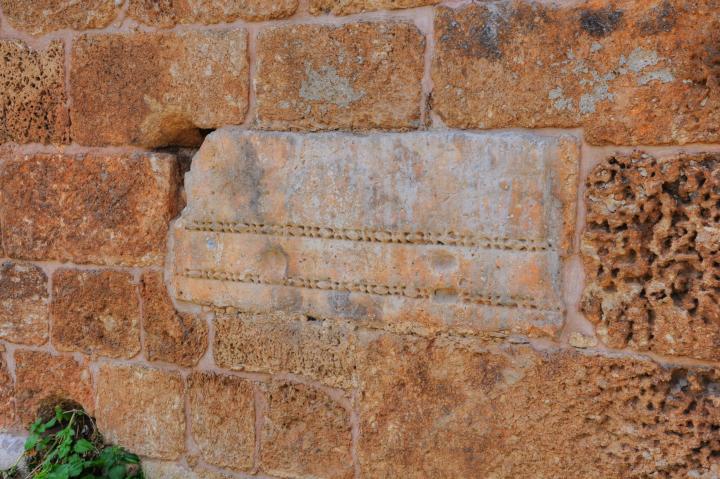 The entrance to the Donjon was through an opening on the south side. A stairway along the wall led to the upper floor.

Note that the Donjon (French) is also called "the keep" (English), which is a strong central tower which is used either as a tower, inner fortress or dungeon (hence the name Donjon). In medieval castles the Donjon was usually an inner tower which protected the defenders in case the main walls were penetrated, and in daily life it served as the residence of the commander of the fortress. 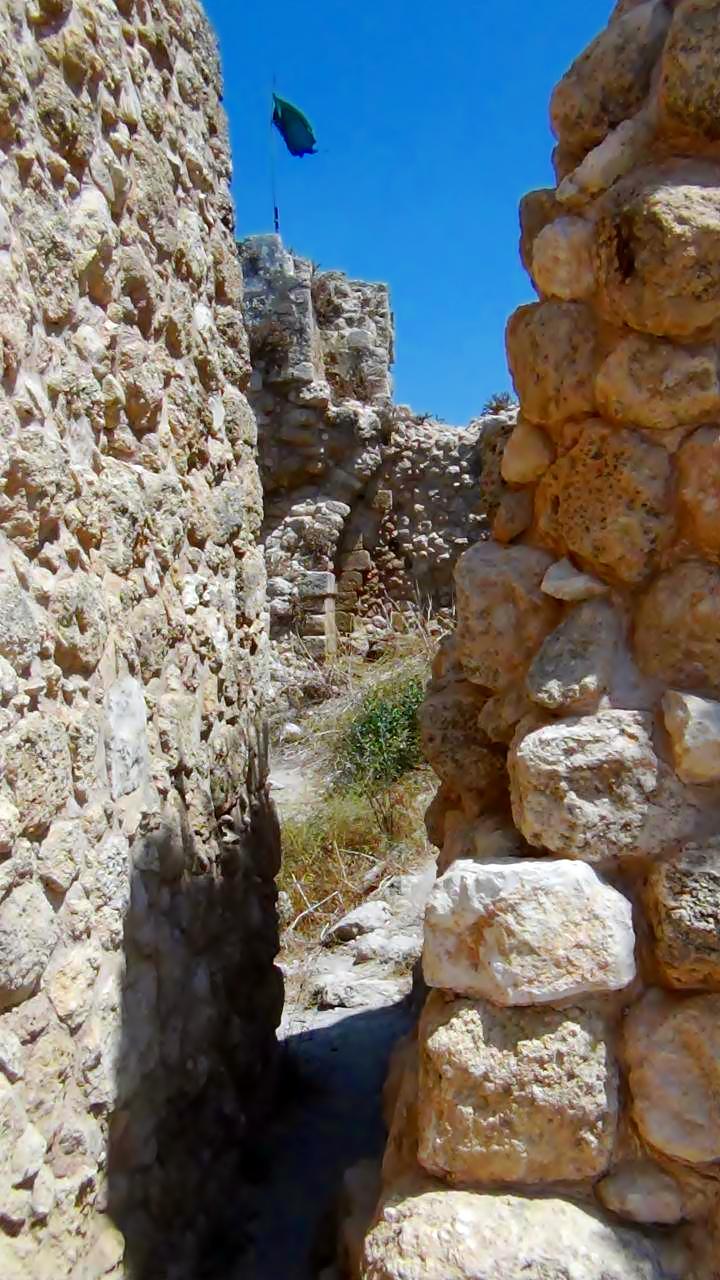 The south-east corner of the donjon is seen here, with the Israeli flag on top. The Crusaders used fine masonry squared blocks to build the walls. 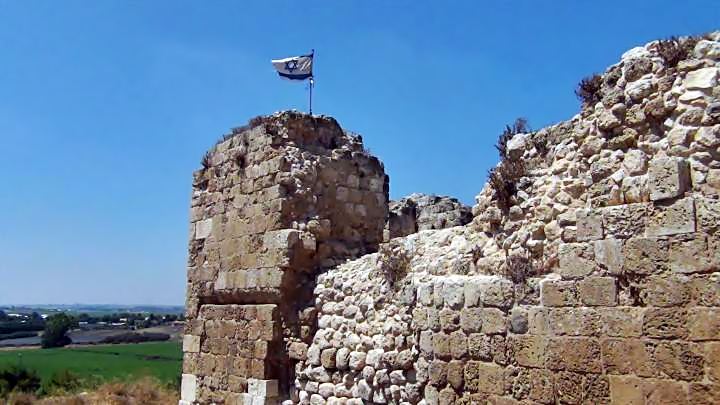 A view of the south-east corner of the fortress is in the next picture. One of the arrow slits is seen on the right side. 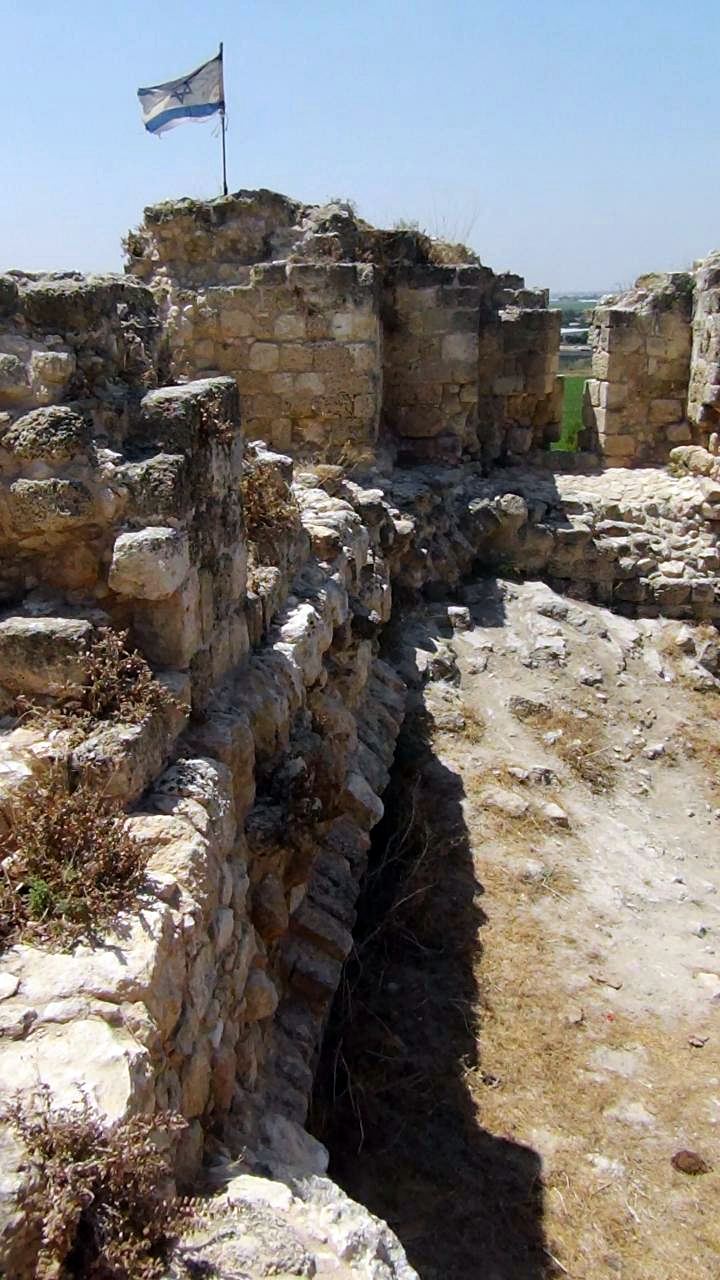 From the fortress are great views of the fields around the site. Moshav Gan Yoshiya (established 1949) is seen on the right background. 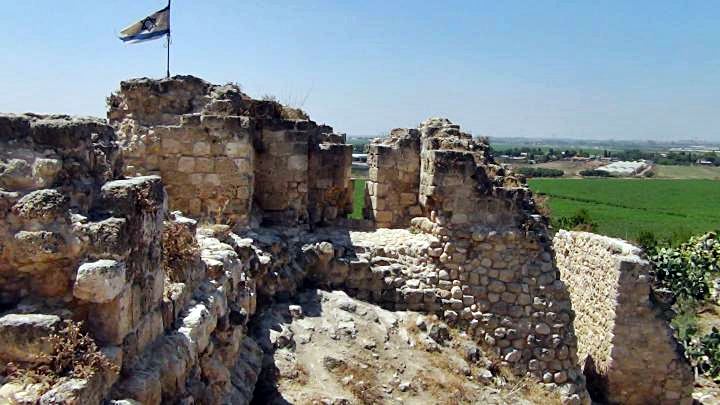 The north-east corner of the fortress is shown in the following photo. 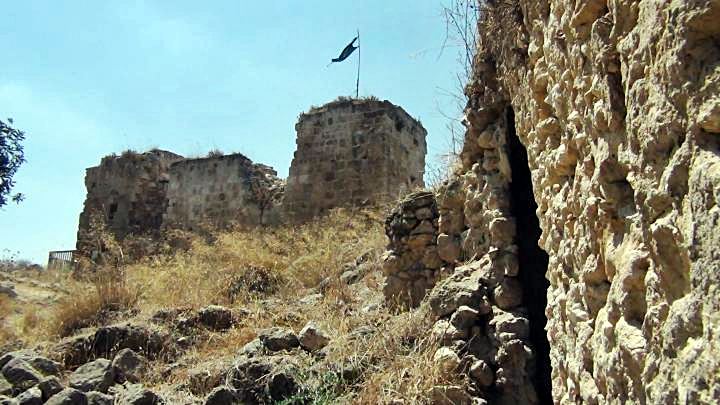 A view towards the north-west: 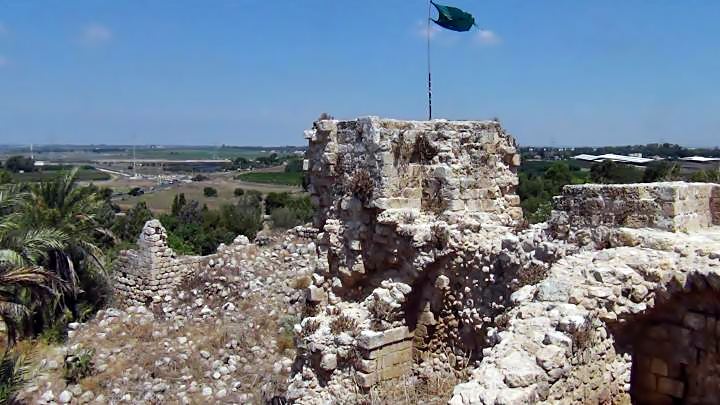 The next photo is a view inside the north-east corner is seen below, with vaults on the lower floor of the tower.

A ceramic pipe embedded in the northern wall was used for internal communications in the fortress. 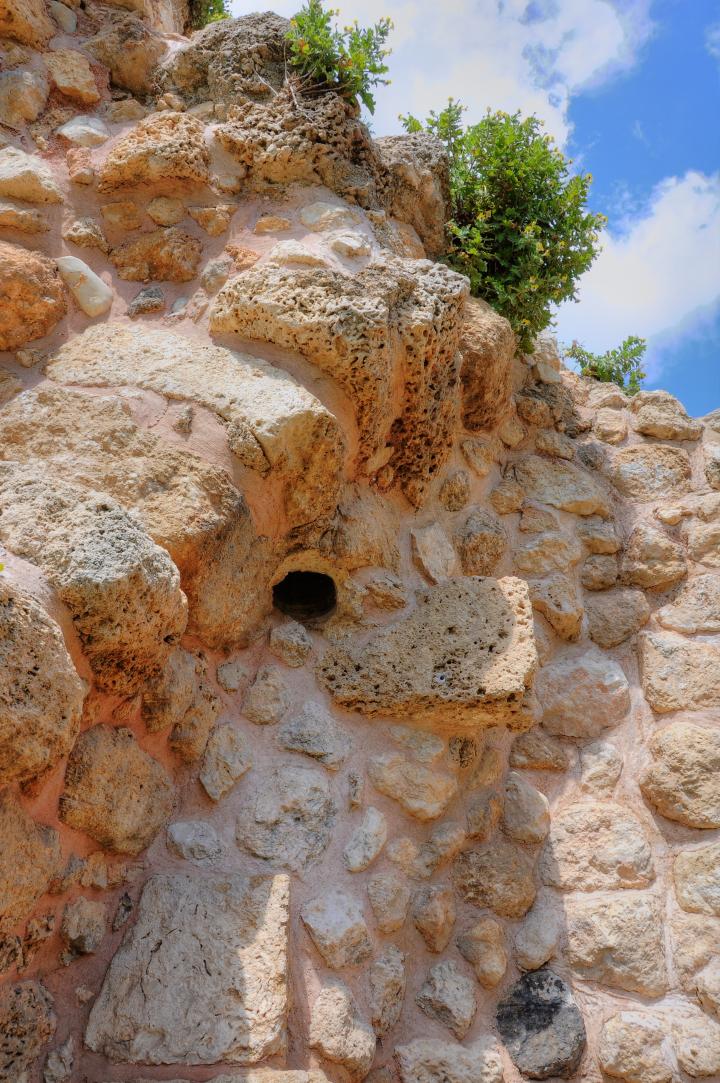 A closer view of the ancient "telephone": 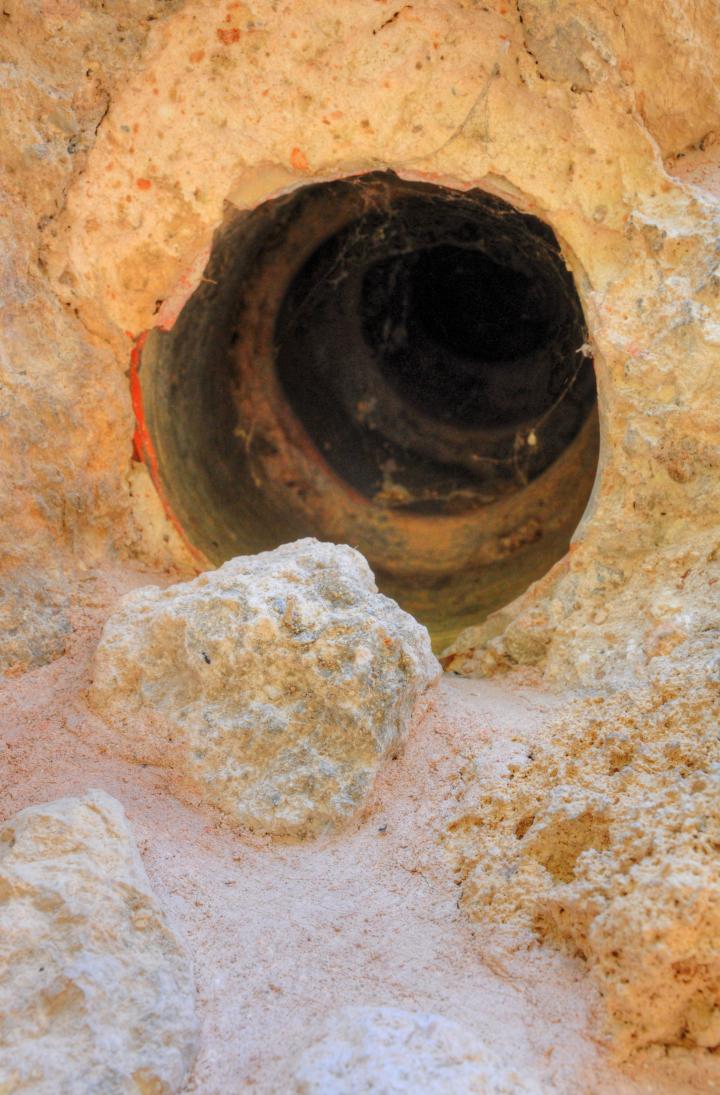 The photo shows the view of the north corner of the donjon. Notice the white corner stone, which is a Crusader type design. 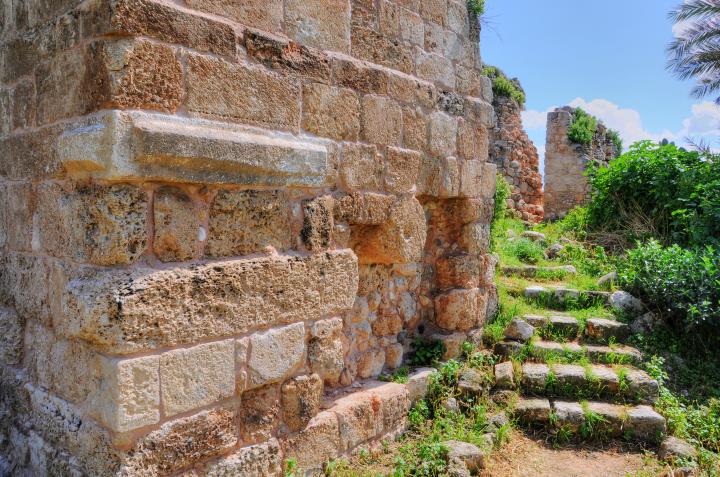 (d) Views from the Donjon:

A view towards the south-east: 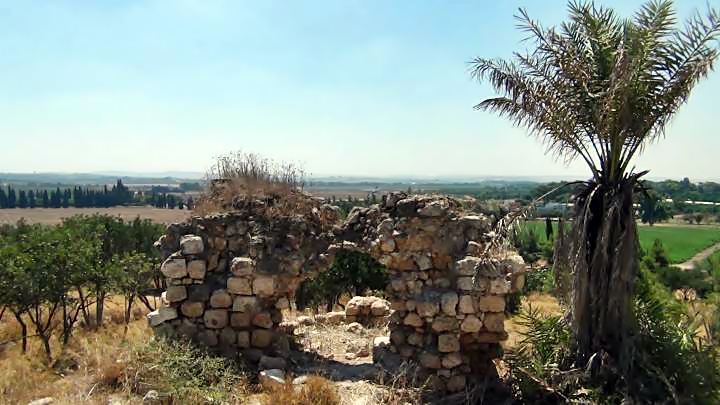 A view towards the south: 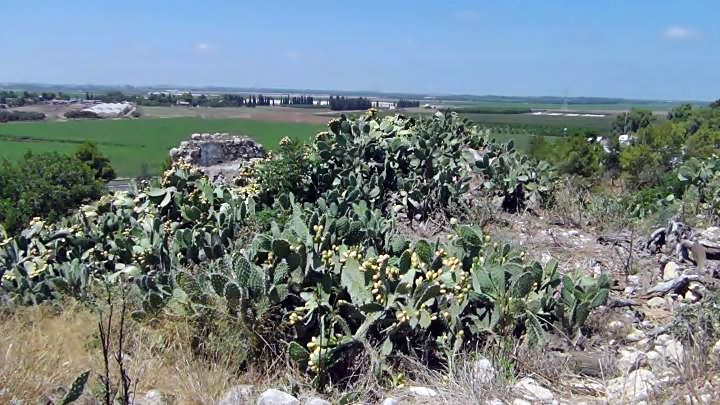 A view towards the east: 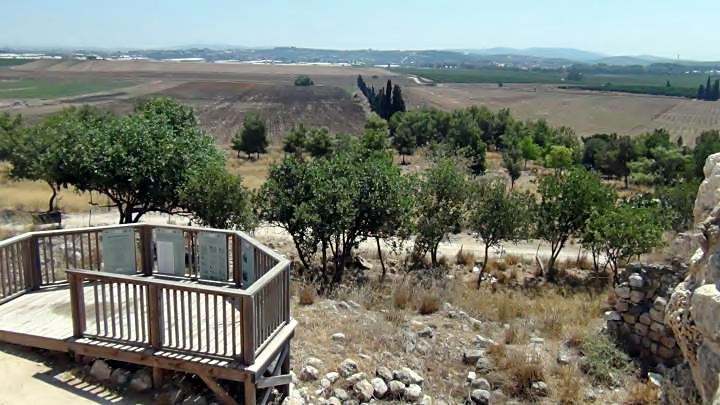 A view towards the west: 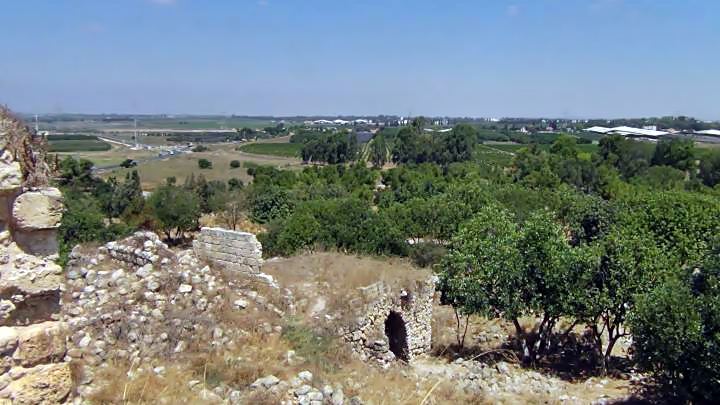 Another structure is located to the west of the tower. This may have been the mosque (which was built over the Crusaders' Latin parish church). 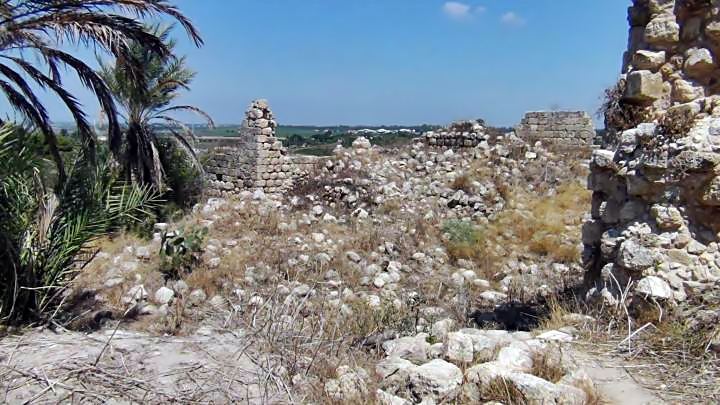 A closer view of the ruins of the structure, as seen from the tower: 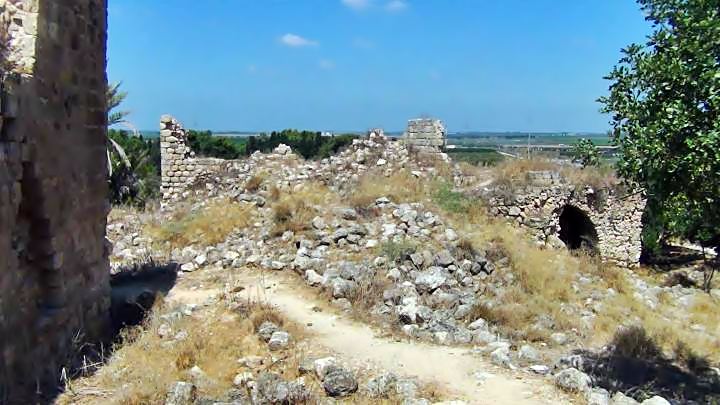 A north view of the structure is shown in the next picture. Two large vaults supported a second floor. 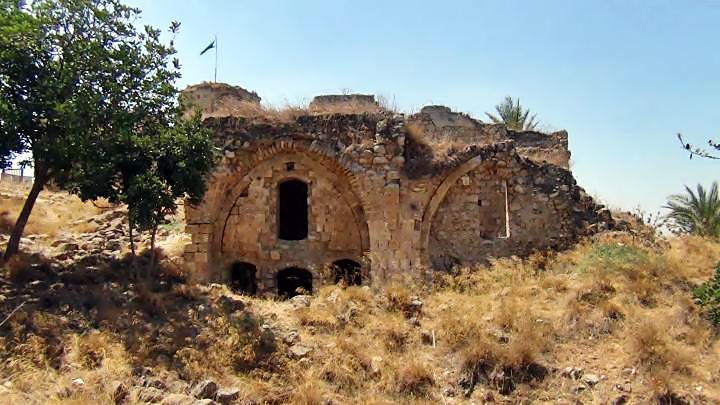 A closer view of the lower level: 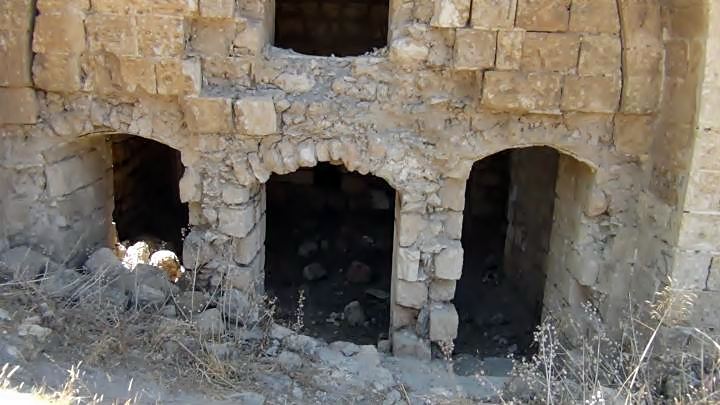 During the Israeli Independence war (June 5, 1948) the Israeli forces, soldiers of the Haganah's Alexandroni unit,  attacked the Iraqi forces inside the large village of Qaqun. After a long battle the village was captured. During this battle 16 Israeli soldiers have died, and a monument on the west side of the hill commemorates the fallen soldiers. 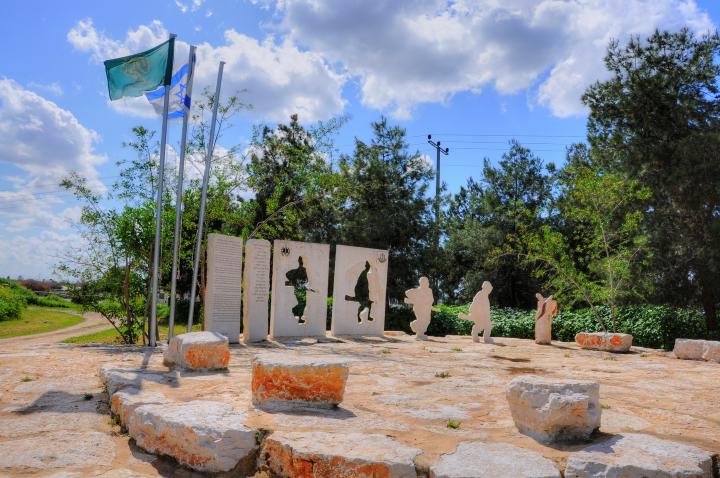 BibleWalks.com - tour the Land with a Bible in the hand