Tell Kinneret is a high hill on the north-west side of the sea of Galilee, where the biblical city of Kinneret once was located. Today the site is used as the water pumps for the National Carrier project.

Tell Kinneret is located on the north-west corner of the sea of Galilee, west of Tabcha. It is 75M above the lake and 125M under the Mediterranean sea level. 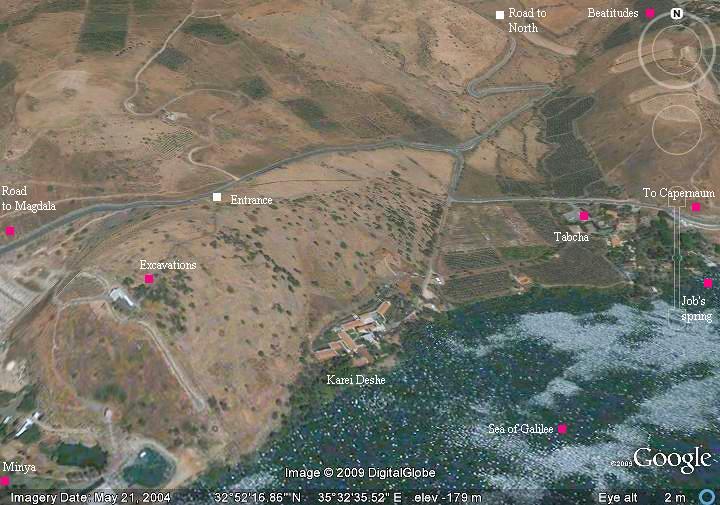 In the prehistoric period the area south-east  to the Tell, in the edge of the Amud creek, was populated starting in the Early Paleolithic period (150,000 to 80,000BC). Fragments of skeletons were found in the Amira cave and other caves along that creek, about 2KM from the Tell.

The Tell was populated starting in the Early Bronze period (3150BC-2200BC).

In 1928 a fragment, from a Egyptian basalt tablet, was found on the hill. It is believed to be from the time of Egyptian Pharaoh Thutmose III, whose conquest in 1468BC captured many of the land's cities, including Kinneret which was listed in his 119 captured cities.

The Tell continued as a city until the Hellenistic period (4Th-1stC BC), and then was relocated to Cappernaum, following a common pattern of relocation from the Biblical Tells to the new and larger villages.

At Jesus times, the road from Cappernaum to/from the Galilee and Jerusalem passed at this site, so all his many travels (see the events list of Jesus footsteps)  have passed here. Judging from the topography, this was probably at the side of the shore of the lake, through the seven springs (Tabcha) and near Khirbet Minya. It may have also been the place where he healed many people - Gennesaret (Mk 6:53, Mt 14:34).

This is a view of the Tell from the south.  On the Tell are traces of ruins: fragments of Ceramics, and ancient building blocks. The National Carrier water pumps are located in parts of the hill. 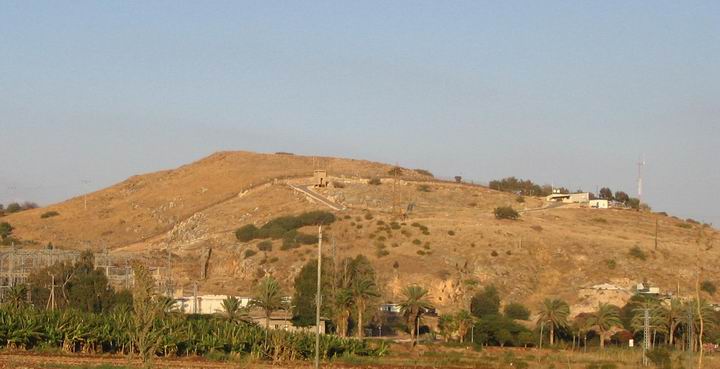 This is the view from the north, seen from the entrance to mount beatitudes. On the right side is the hill, behind it is the Arbel cliffs, and on the left is Tabcha. 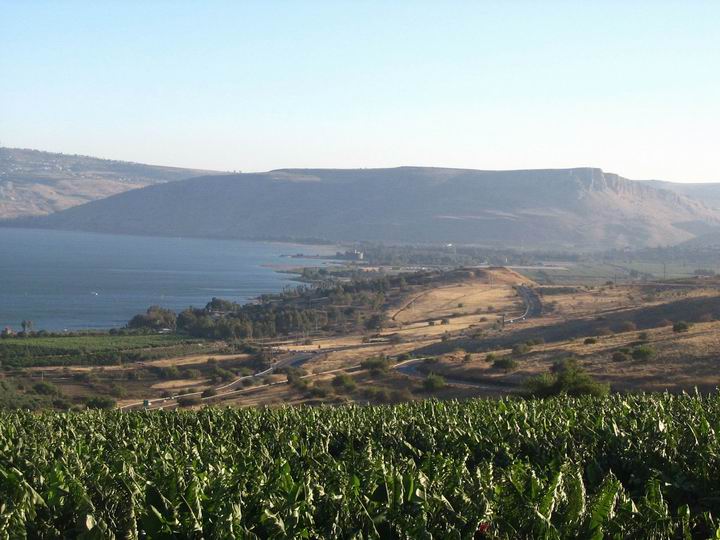 (b) View from the Tell 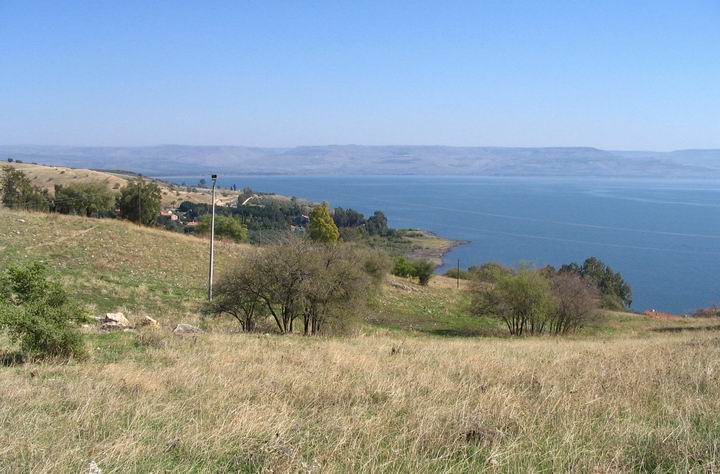 (c) The excavations on the Tell

On the sides of the Tell and on the peak there are large size excavations that revealed the walls and the buildings.

In the photo below you can see parts of the excavated areas, belonging to the bronze age. This photo is on the eastern slope facing the lake. 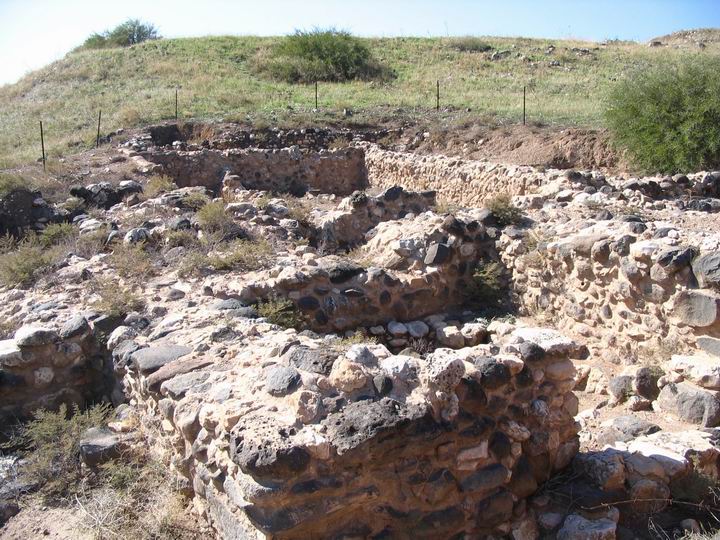 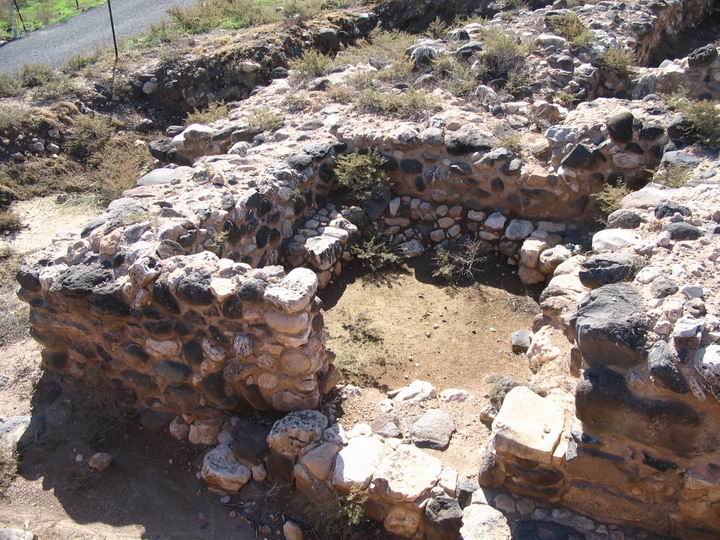 From the top of the tell there is a great view of Horvat Minya, the plains of Ginossar,  and the Arbel cliffs in the background. 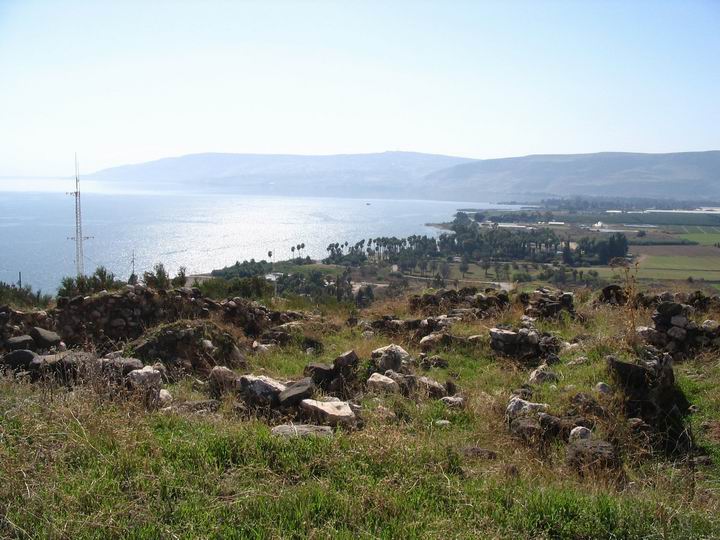 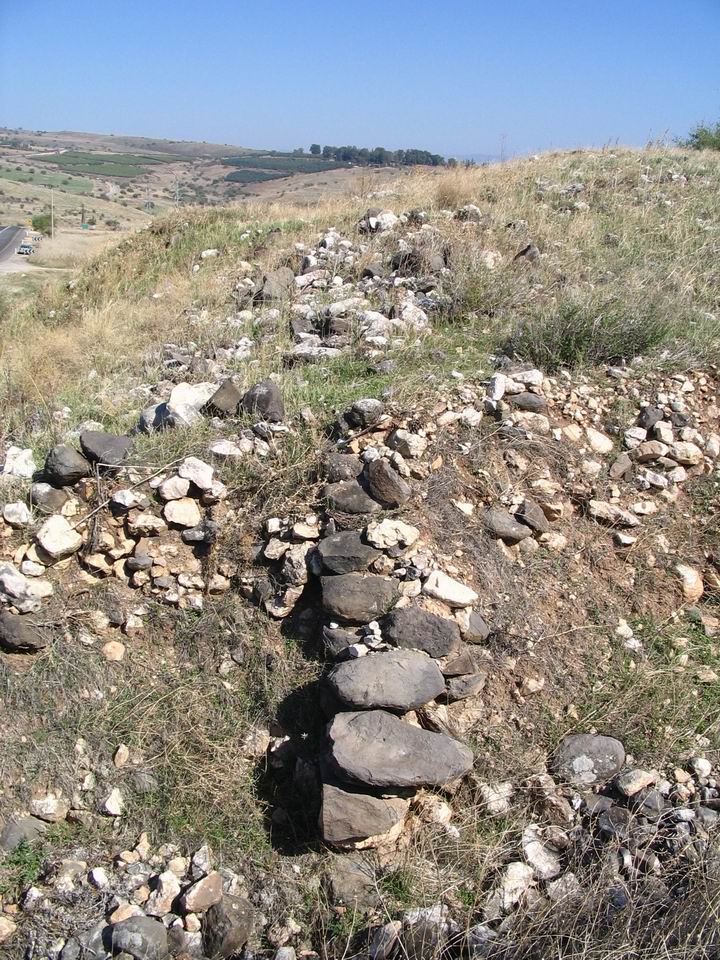 And the fenced cities are Ziddim, Zer, and Hammath, Rakkath, and Chinnereth,
And Adamah, and Ramah, and Hazor,"

"So Benhadad hearkened unto king Asa, and sent the captains of the hosts which he had against the cities of Israel, and smote Ijon, and Dan, and Abelbethmaachah, and all Cinneroth, with all the land of Naphtali".

In these texts Jesus lands on the shores of  the "land of Gennesaret", which is called after Tell Kinneret (the main city at this area)  or the valley south to it (along the shore until Magdala). Here he heals many people.

"And when they had passed over, they came into the land of Gennesaret, and drew to the shore. And when they were come out of the ship, straightway they knew him, And ran through that whole region round about, and began to carry about in beds those that were sick, where they heard he was. And whithersoever he entered, into villages, or cities, or country, they laid the sick in the streets, and besought him that they might touch if it were but the border of his garment: and as many as touched him were made whole".

"Then they that were in the ship came and worshipped him, saying, Of a truth thou art the Son of God. And when they were gone over, they came into the land of Gennesaret. And when the men of that place had knowledge of him, they sent out into all that country round about, and brought unto him all that were diseased;  And besought him that they might only touch the hem of his garment: and as many as touched were made perfectly whole".