The location of Kida, and the places around it, are indicated on this aerial map. 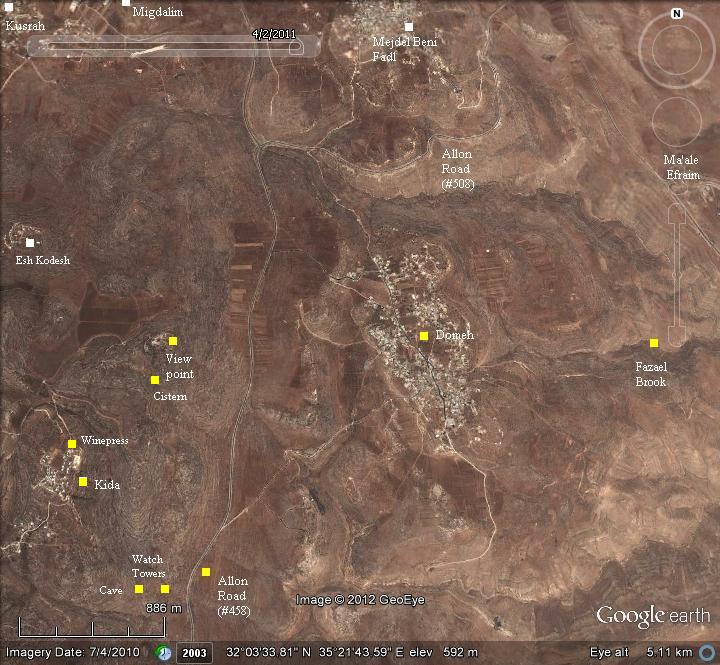 Conder and Kitchener surveyed this area during the Survey of Western Palestine in 1882.  They reported on their account of the villages and ruins around the site (SWP, Vol 2):

Below, a view of the Kida community from the north. 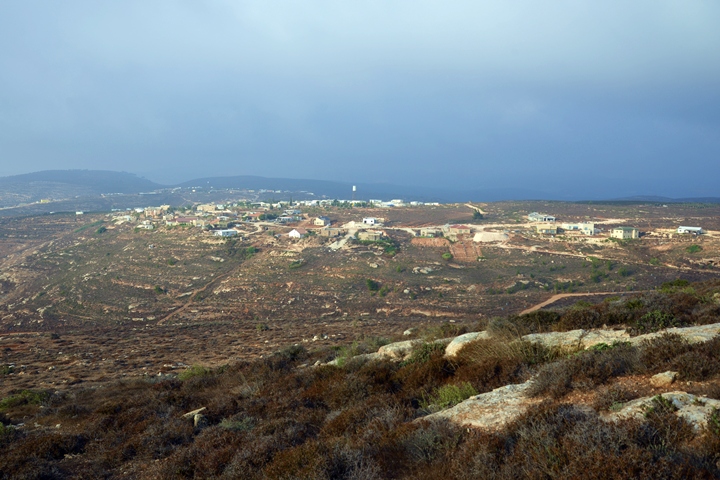 The old military post of Kida is a great place to view the eastern side of Samaria. It overlooks the Allon Road, which connects Ma'ale Adummim  in the south (near the Good Samaritan Inn), to Mehola in the north.

The following photo shows the place from the south side. The Kida view pointy is located near the antenna on the hill, overlooking the Samaria desert on the east. The hills are mostly barren, and a recent fire cleaned out all the small bushes that grew along the foothills.

A section of the Allon road is seen on the right side. 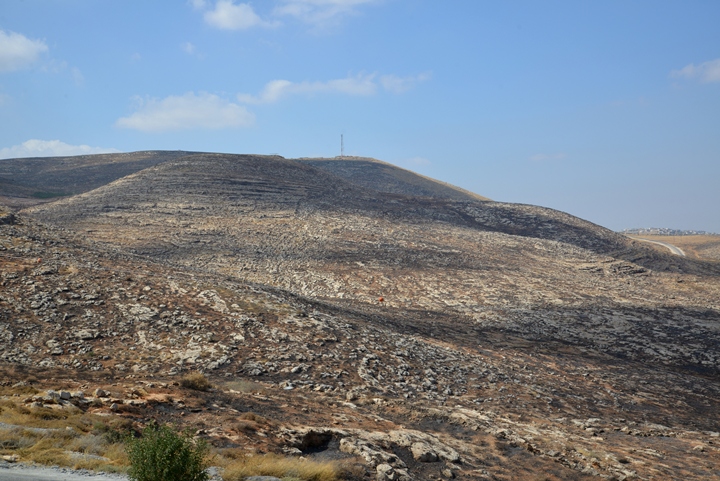 The Allon road is named after the plan conceived by the late Igal Allon, who drafted it in 1967 in order to plan the settlement and control of Samaria and Judea.  This section is numbered road #458 - the southern section of Allon road.

In the left background, 3km to the north, is the Arab village of Mejdel Beni Fadl. The Allon road bypasses this village around its south and eastern sides: just before arriving to the village, the Allon road turns east (to the right), then north again along its central section (road #508). 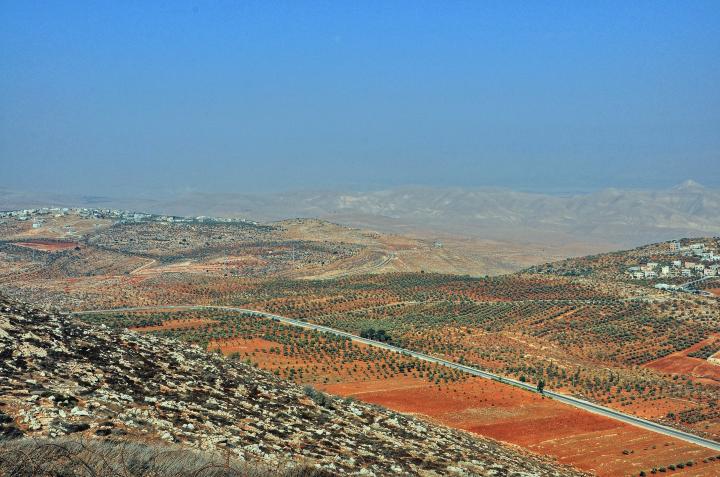 Looking towards the east - is the village named Duma (appears as Dömeh in the PEF map). It is the only Arab village east of Allon Road.

Behind the village of Duma, in the far background, are the barren hills of the northern Judean desert. Behind, in the very far background, is the section of the Jordan valley near Adam.

In the center of these hills is a pyramid-shaped hill towering over the mountain ridge. This hill is the location of the ruins  of  the Sartaba fortress - which was built by the Hasmoneans in the 1st C BC. It was also known as Alexandrion or Alexandrium, and in Biblical times this place was identified as Zaretan. Its location was a landmark referred by the Bible, described as a place "beside" Adam - the place of the crossing of the Israelites during the Exodus (Joshua 3 14, 16): "And it came to pass.. to pass over Jordan ...  very far from the city Adam, that is beside Zaretan". 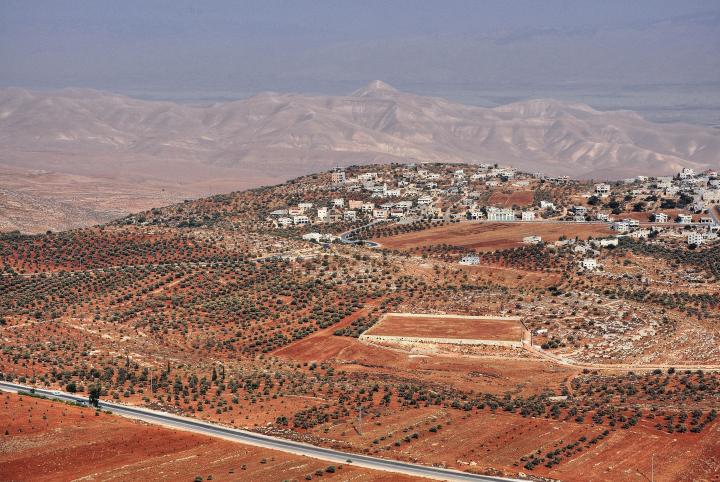 The southern side of Duma is seen here below. As reported in the 19th C SWP report, the village was protected by a wall and towers on both west and east sides. Behind (east) of the village is Kh. el Munttar (the "Watchman") - probably the ruins of one of the towers. 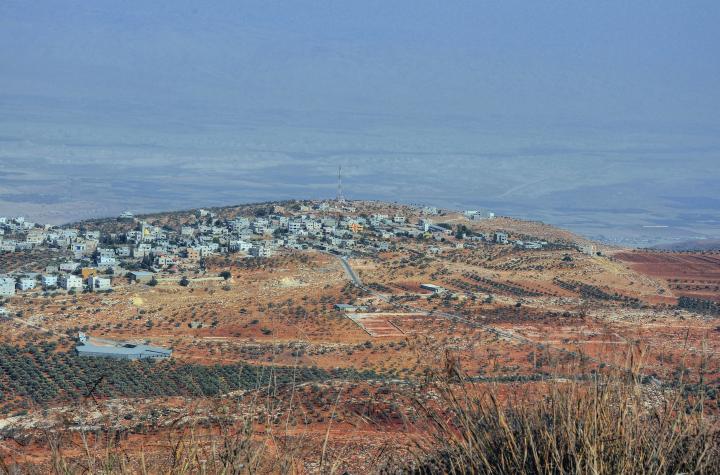 From Duma is a trail that descends down to Fazael (Phasael, Phasaelus, Phasaelis), passing through a spring and brook that flows to the Jordan river. At the mouth of the valley is a Biblical site, which is identified as Ataroth.

Panoramic view: A panoramic view was taken from the abandoned military post of Kida, which overlooks Allon road. If you press on it, a panoramic viewer will pop up. Using this flash-based panoramic viewer,  you can move around and zoom in and out, and view the site in full screen mode.  Due to the size of the file, this may take several minutes.

To open the viewer, simply click on the photo below, then wait until the viewer loads.

One of the sources of income - and pride - of the settlers in Samaria is the production of quality wine. The grapes that are grown in the hills of Samaria enjoy the warm days and cool nights, which make a good recipe  for good wines. 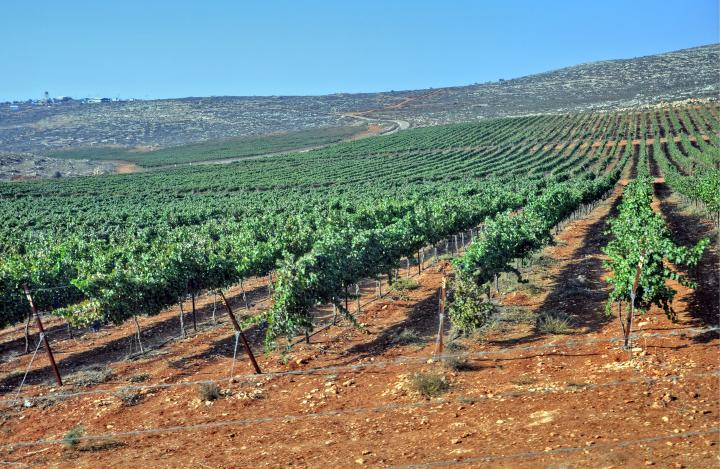 Wine and Olive oil was one of the main sources of income during the ancient times. Samaria, as well as all regions in the Holy Land, has hundreds of ancient winepresses and oil presses cut into the rocks.  Now the settlers  revive the wine industry, including two local wineries (Shiloh and Talia) located in nearby Shiloh.

In ancient times the press was built inside the grape vineyard, as the wine must be processed without delay from the time the grapes are picked.  Inside the community is an old wine press, dated to the Roman period, seen in the following photo. Another one is located near the Kida old military camp. 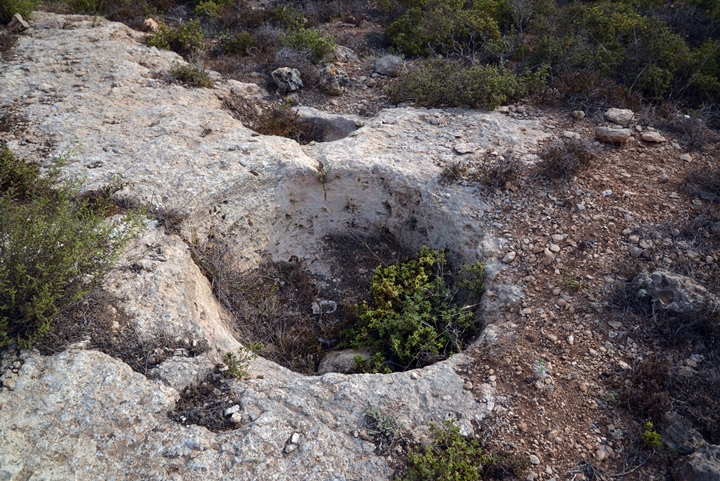 This mountain area is dry, as it is on the fringes of the Samaria desert. The ancient means of water supply was based on water cisterns, that collected the runoff rain water and stored them for use during the dry season.  One of the cisterns is located on a hill south of the antenna. This ancient cistern was probably hewn more than 2,000 years ago, and was used by the shepherds to water their herd. 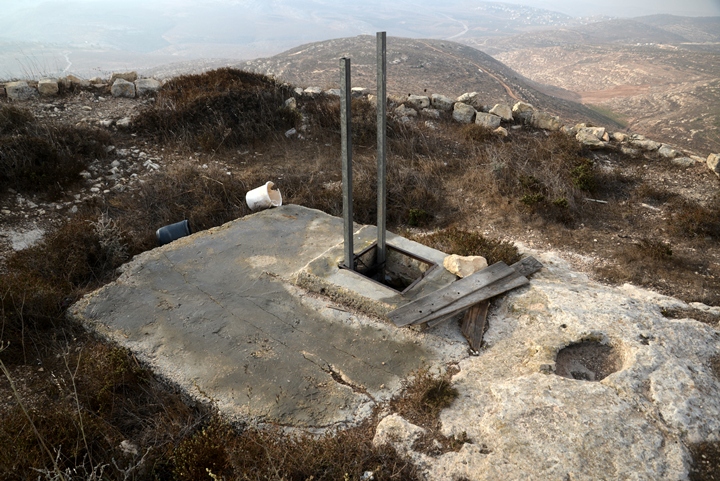 However, the cisterns are used today by the Jewish settlers as a Mikveh, for the purpose of ritual immersion.  They added a ladder in order to step down into the waters. 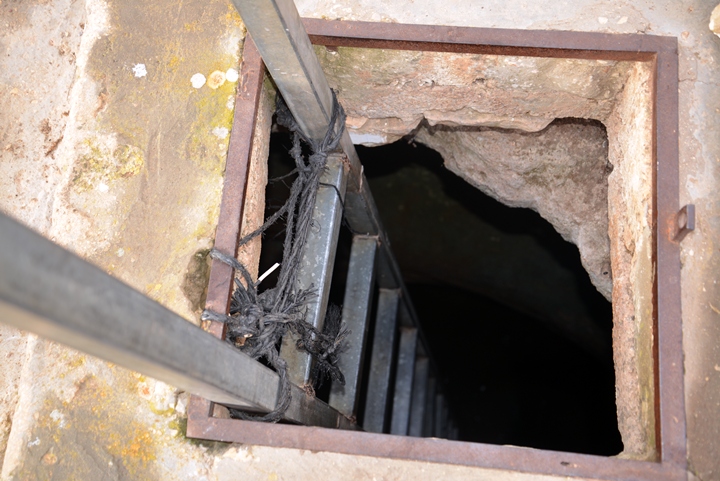 Another example is in the valley below, just above the junction below Kida. 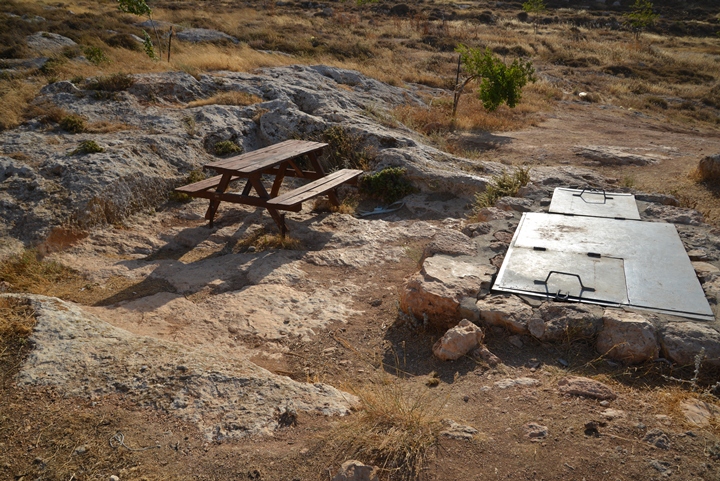 Here too the cistern was converted to a Mikveh by adding a ladder. 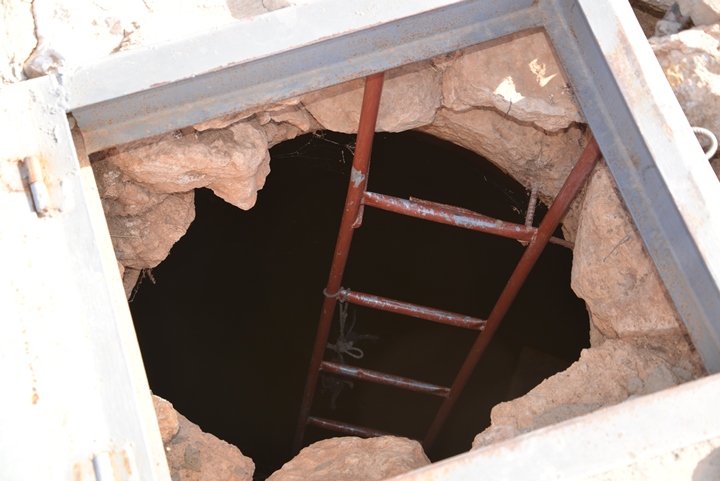 In the valley east and below Kida, near the Alon junction with the road that ascend to Shiloh, is a cave which was converted to a dwelling place. 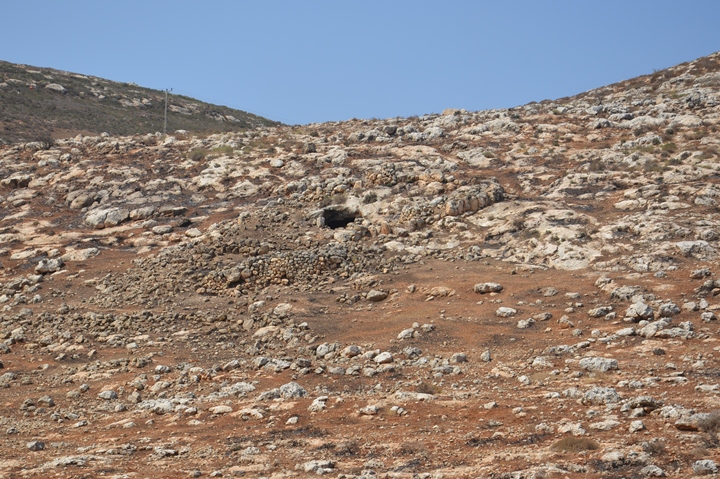 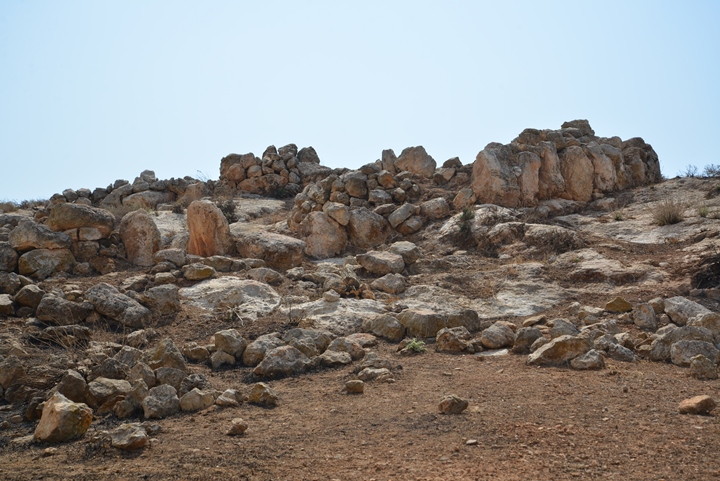 The interior of the cave: 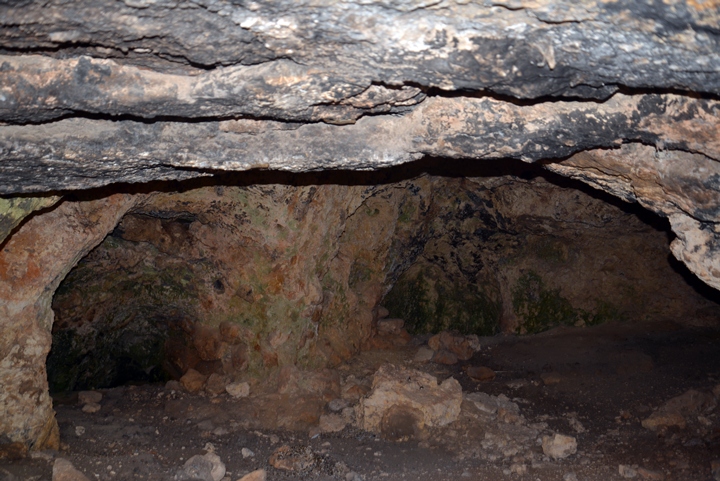 Several rooms are built around the entrance to the cave: 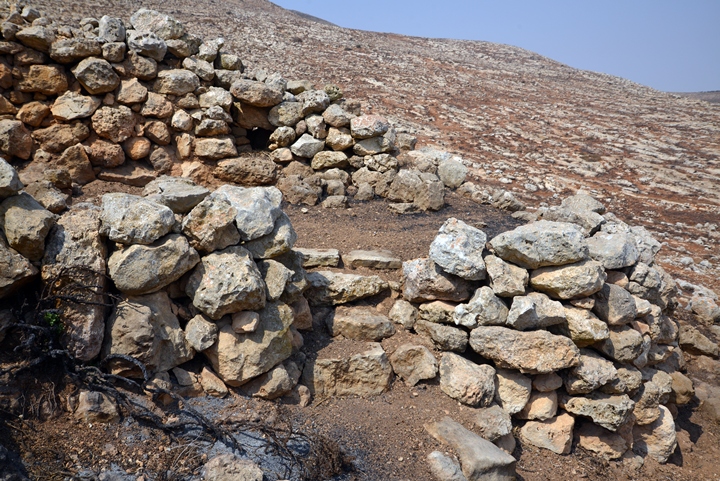 A large pit is located not far from the Allon road. This was a kiln, which used to burn limestone in order to produce Calcium oxide (aka, quicklime or burnt lime). The lime was then used as a sealant to cover the surfaces of the cisterns, thus preserving the water in the reservoirs. It was  also used as a key ingredient for making cement. 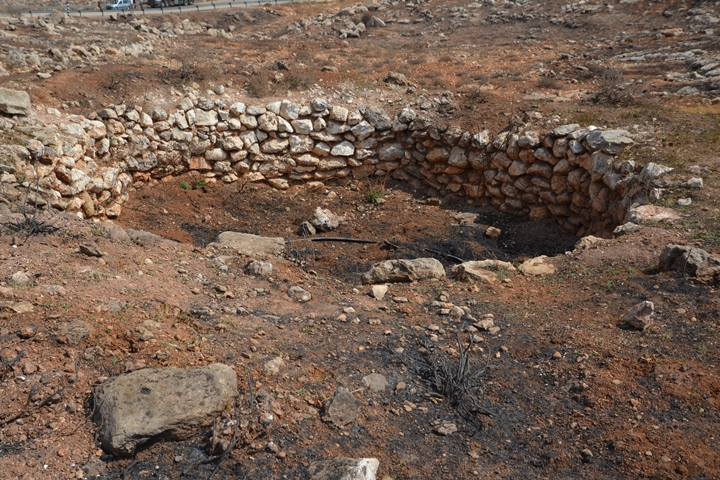 Near the kiln are ruins of two small watch towers, 3-4m in diameter and 1-2m high, built with large stones.  Here is the first one: 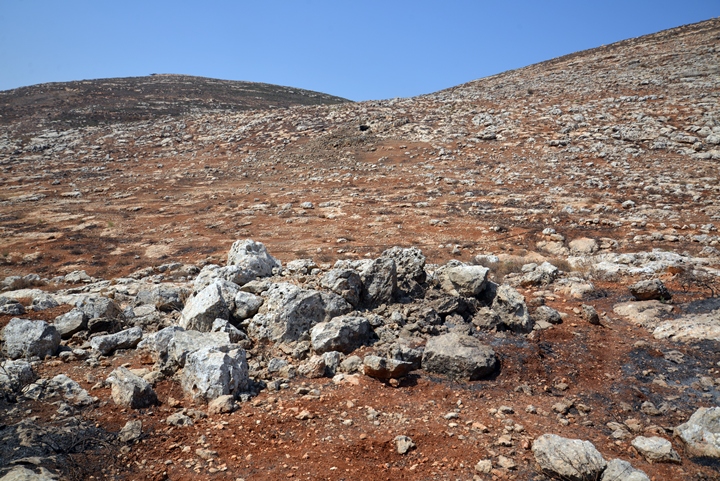 The second structure, which is smaller, is located nearby: 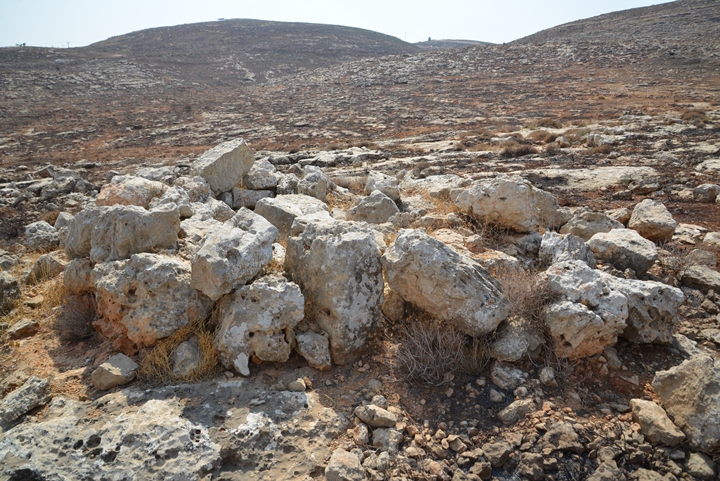 To the north of these round structures are remains of a long wall and wide path, perhaps an ancient road that lead up to the mountain. 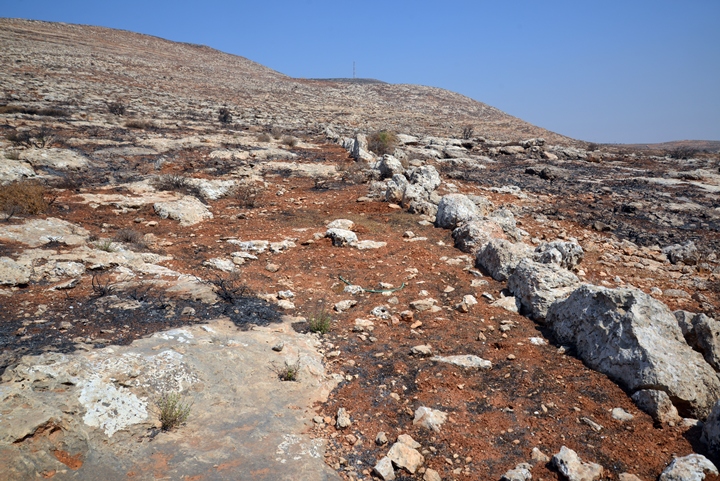 Note that farther below are remains of an Israelite period road, with a line of stones on each of its sides. It  led up from the Jordan valley, passed on the north side of kh. Jibeit, then climbed up the hill to the Shiloh valley. So this may have been an extension to that road. 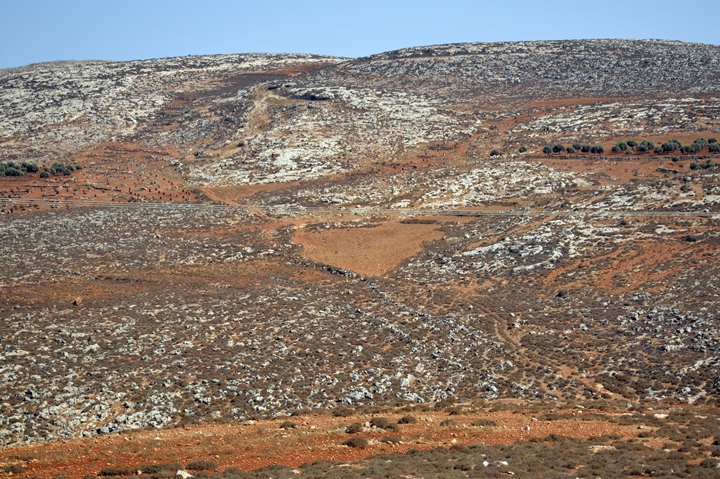 While we were searching for ancient structures, curious gazelles were checking what are we doing in their habitat... 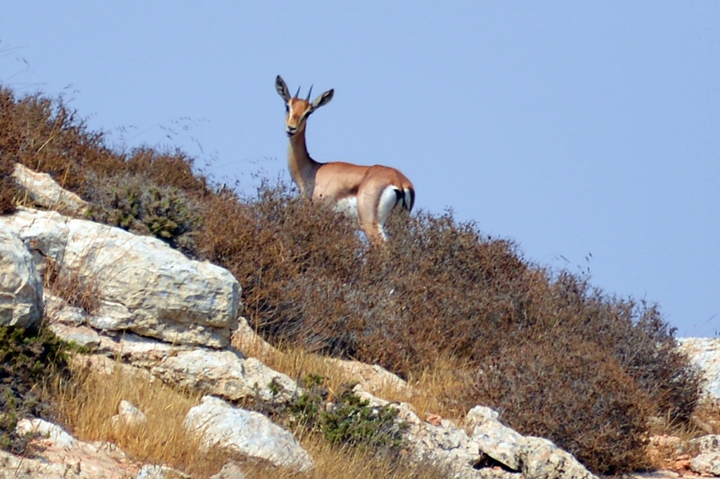 On the old military post wall is a sign in Hebrew, probably sprayed by one of the young settlers: "Die, or conquer the Mountain - you shall conquer it!!!". 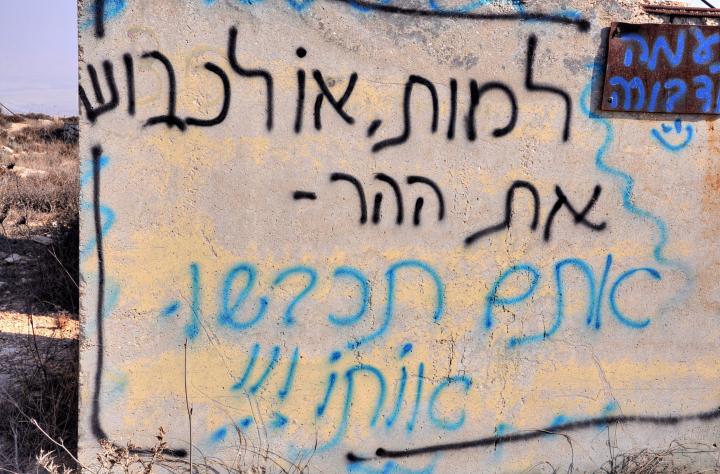