The southern section of the Jordan river near the Dead sea. A traditional site of the Israelite crossing site to the Holy Land, Elijah's departure, baptize of Jesus by John, and location of many monasteries and chapels.

John 1 28: "These things were done in Bethabara beyond Jordan, where John was baptizing".

The southern side of the Jordan river, before it flows into the Dead Sea, is the Jericho section. At this location, on the border between Israel and Jordan, are a number of points of interest: the traditional  site of the crossing of the Jordan by the Israelites, the departure of Elijah on a chariot of fire, the pilgrimage site of John's baptize of Jesus, and many  monasteries and chapels of various Christian orders.

The aerial map of the area is shown below, indicating the major sites. The Jordan river flows between Israel (left side) and Jordan (right side), in a winding. It is located at a height of -375m (under sea level), 9KM east to Jericho, 7KM north of the Dead Sea. You can point on the purple points to navigate to the selected site. 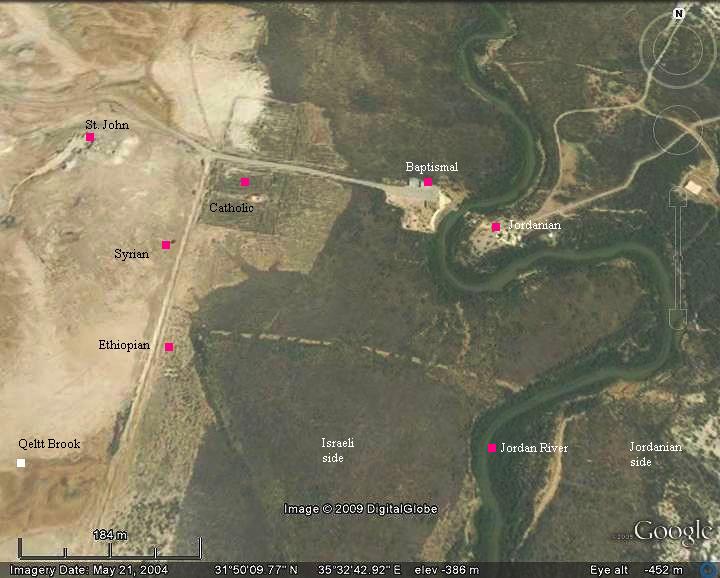 According to some traditions, the Israelites crossed the Jordan at this location on their return from the exile in Egypt. The site is loacted "against Jericho" as described in the following verses ( Joshua 3 9-17): "And Joshua said unto the children of Israel, Come hither, and hear the words of the LORD your God.... Behold, the ark of the covenant of the LORD of all the earth passeth over before you into Jordan. And it came to pass, when the people removed from their tents, to pass over Jordan, and the priests bearing the ark of the covenant before the people;"

A Roman road connected the site to Jericho, and was part of the road systems that connected Jordan to Israel. Traces of the road can be seen on the north side of the road from Jericho.

During the Byzantine period, many pilgrims flocked to the site to get blessed and visit the holy site.  To support this pilgrimage, a Byzantine Monastery was constructed in the 4th C AD at a site overlooking the Jordan river, on the location of later St. John. The monastery was destroyed after the fall of the Byzantine empire in the 7th-8th C.

During the Crusaders period (12-13th C), the Christian pilgrimage resumed. The  monastery of St John was rebuilt (1128) on top of the earlier Byzantine structure.

A number of monasteries and chapels were constructed near the baptism site in order to support the arrival of a new wave of Christian pilgrims that flocked to the site starting at the 19th C. Almost every order which had presence in Jerusalem - Catholic, Coptic, Russian, Ethiopian - had its own chapel built here.

The monastery of St John was severely damaged in the earthquake of 1927 and repaired. In 1954 the structure was expanded and rebuilt.

After the six-day war (1967), Israel's border with Jordan passes along the Jordan. The area around the baptismal site is located inside the military zone, and was out of limit. Following the Pope's visit in 2000 the site was partially opened for pilgrims. On Easter the site is also opened to the public for several days under controlled restrictions.

On the Israeli side, the army now allows pre-scheduled visits but accompanied with soldiers. A new visitors center is built on the banks of the Jordan river, but its opening is pending a mutual agreement with the Jordanians.

On the Jordanian side ("Beitabara") the pilgrims can enter to the river side from the new Greek-Orthodox church. Recently, four new monasteries and churches are in the process of construction. Ancient baptism sites were excavated on the eastern bank of the Jordan.

The bell tower of the Greek Orthodox church on the eastern bank of the Jordan river is shown below. In the background are the mountains of Jordan, where Moses remained to die before the crossing of the returning Israelites to the Holy Land. 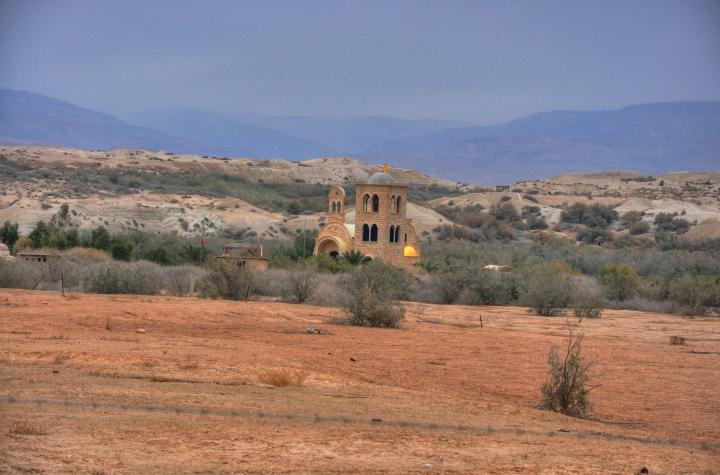 The photo below shows another view of the area of baptism. On the right side, just along the river, is the Golden cape of the Greek Orthodox church and its bell tower. Behind it are new churches constructed on the Jordanian side. In the center, a new visitor center constructed on the Israeli side. On the bottom left side is a Franciscan chapel. 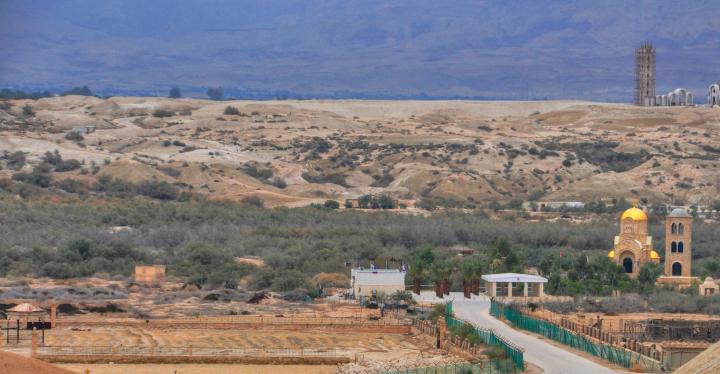 The photo below shows the Jordanian side of the place of baptism. 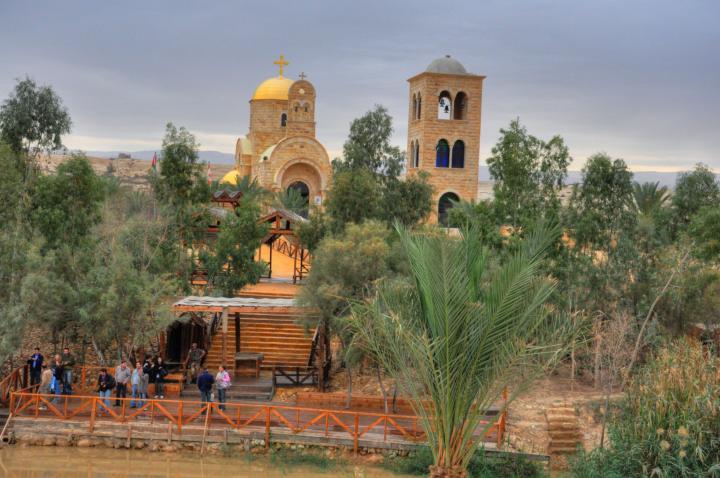 In the photo below - the Golden cape of the Greek Orthodox church (left) and its bell tower (right) are seen behind the baptism site. 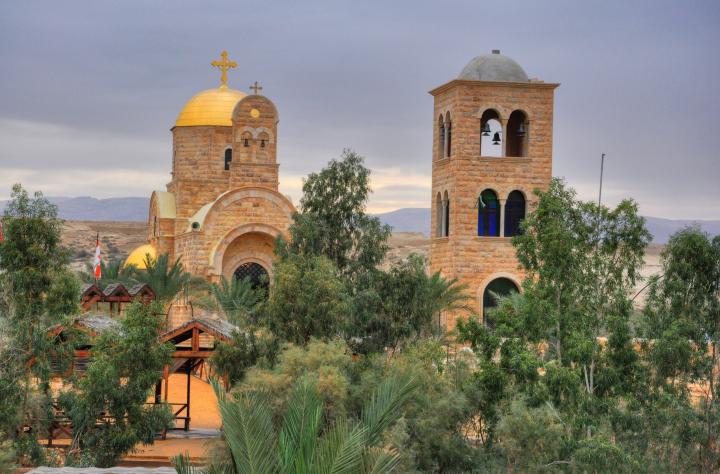 The distance between the Jordanian side and the Israeli side are a few meters, and only the narrow open river departs both sides. Steps lead down to the river in order to allow the pilgrims to immerse (be baptized) in the Holy waters. 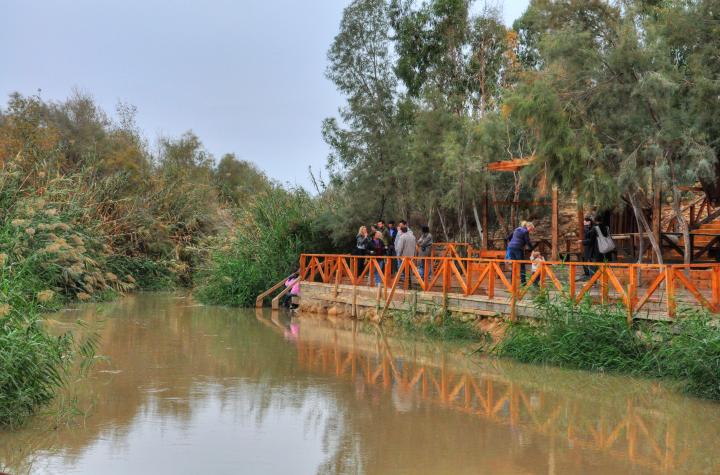 The Jordan river at this location is very narrow and its waters are muddy. After most of the river was cut off from its sources and the outlet of the Jordan from the sea of Galilee was blocked by a dam, the Jordan river became smaller and almost dry. 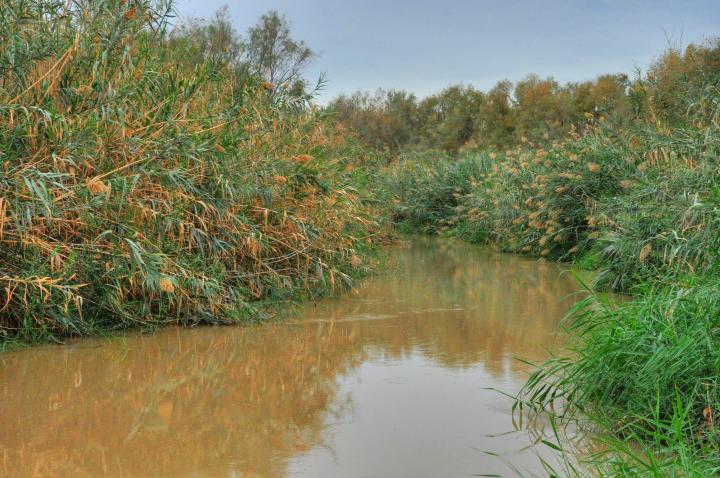 On the Israeli side is a new baptism center, which is currently in use only in a few days a year. 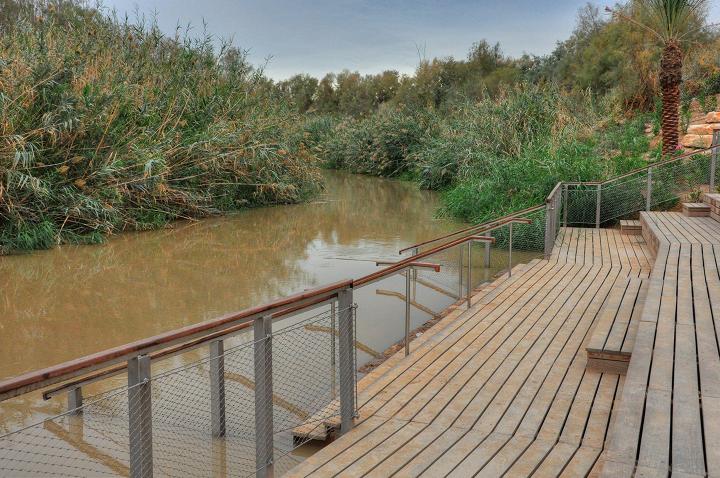 The new modern baptism site, seen below, is planned to be opened to the public after the security arrangements are finalized with the Jordanians. 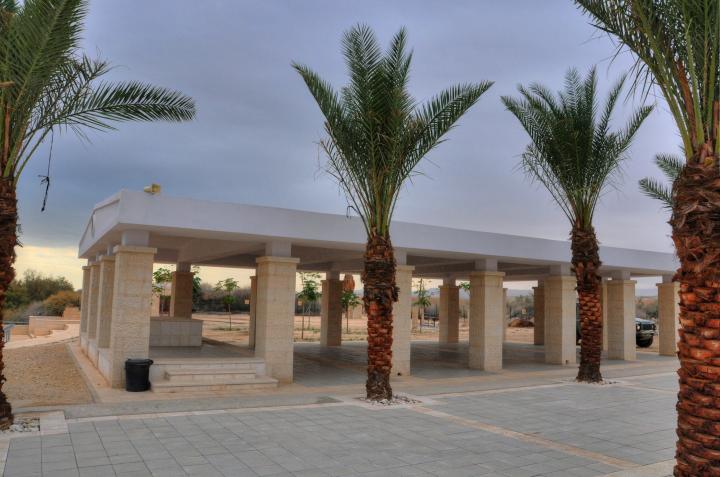 Around the baptism site, on the Israeli side, are a number of small monasteries. These monasteries are the lowest in the world:  -375m (under sea level), and serviced the different Christian orders. They are located on the south-east side of Greek-Orthodox monastery of St John. These structures include: a number of Franciscan Catholic chapels (they are the closest to the river); a Syrian-Orthodox church (south of the baptismal site); an Ethiopian (Abyssinian) monastery (south of the site); a Coptic (Egyptian) monastery; a Romanian church and a Russian chapel (the south most).

All of them are closed and partially ruined. Due to past incidents, where terrorists crossed the Jordan and hid inside these  structures, the army fenced them off and mined them.

The entrance to the Syrian Orthodox monastery is seen below. Its apse - behind the cross - is directed to the east as all churches. 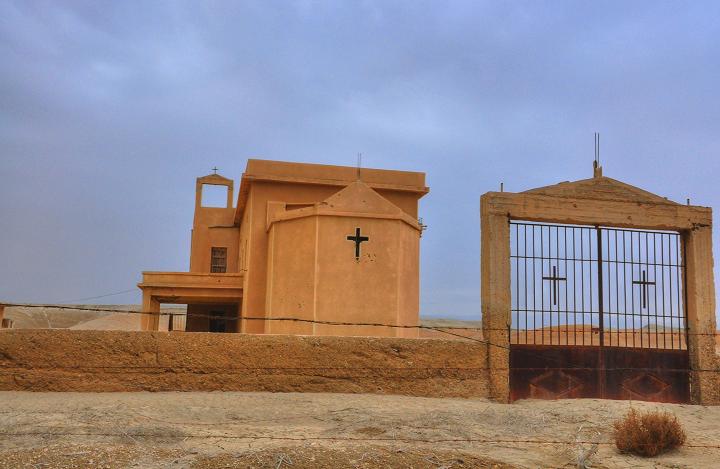 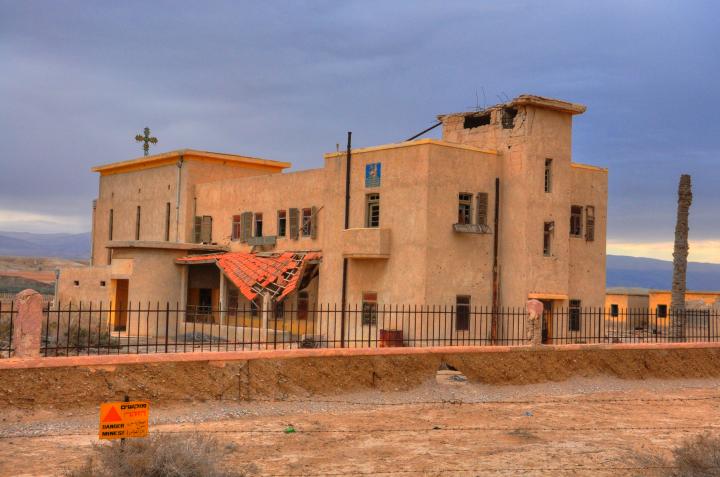 Franciscan Catholic chapels are located close to the baptismal site. A small prayer chapel is located on the south side of the compound, also mined. 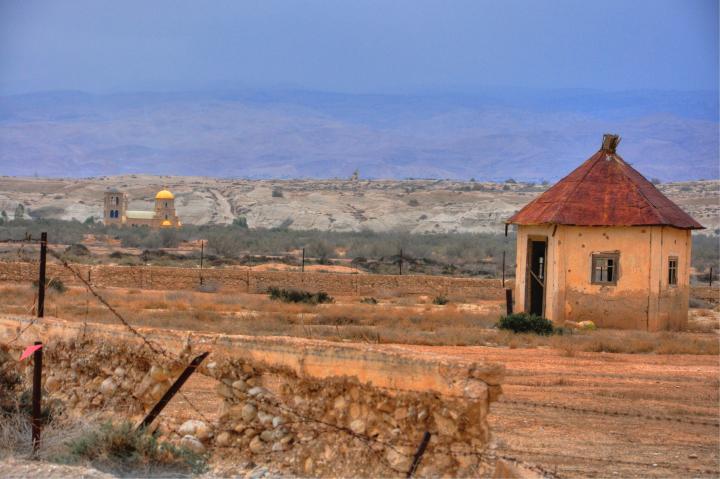 Another larger Franciscan chapel is located close to the road to the river: 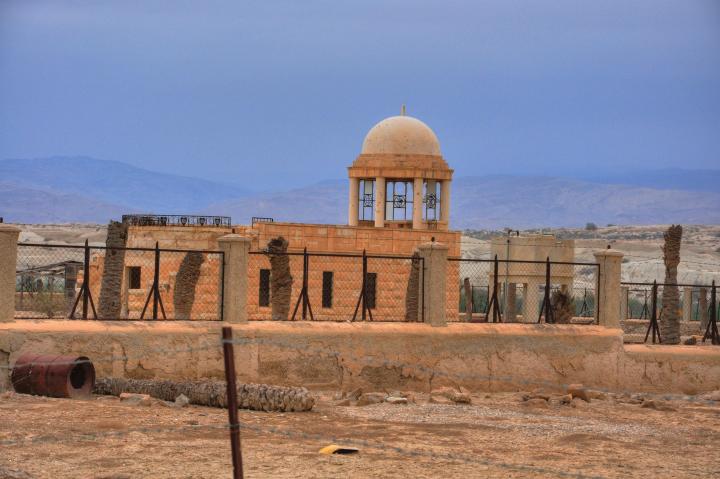 This Greek-Orthodox church, located on a hill above the baptismal site, is named after John the Baptist, who baptized Jesus in the Jordan  (Matthew 3: 13 : "Then Jesus came from Galilee to the Jordan to be baptized by John"). 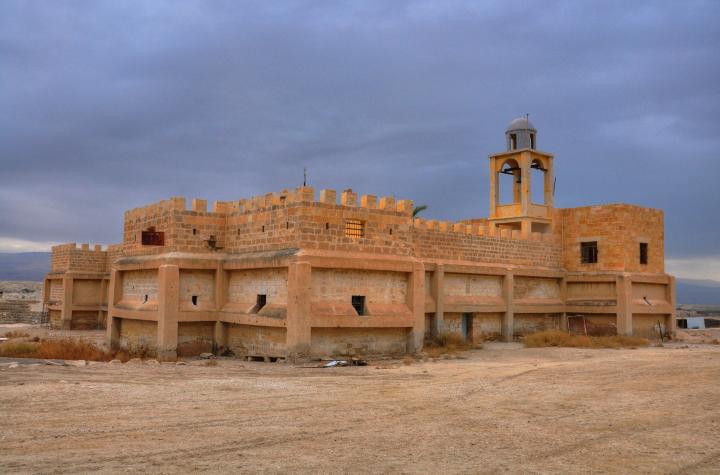 The early Byzantine Monastery was constructed here in the 4th C AD, but only few remains survived. During the Crusaders period, the monastery was rebuilt (1128). It was damaged in the earthquake of 1927 and repaired. In 1954 the structure was expanded and rebuilt. Since 1967 the Monastery is closed.

The following picture is a view from the north side: 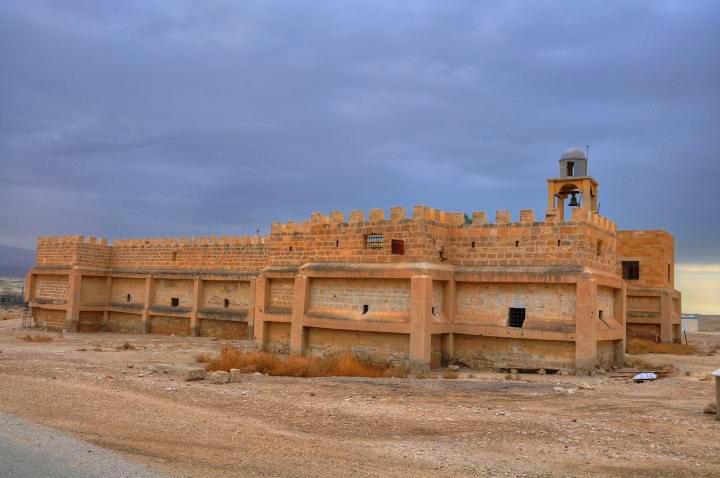 The west side is shown below, with a closer view of its bell tower. 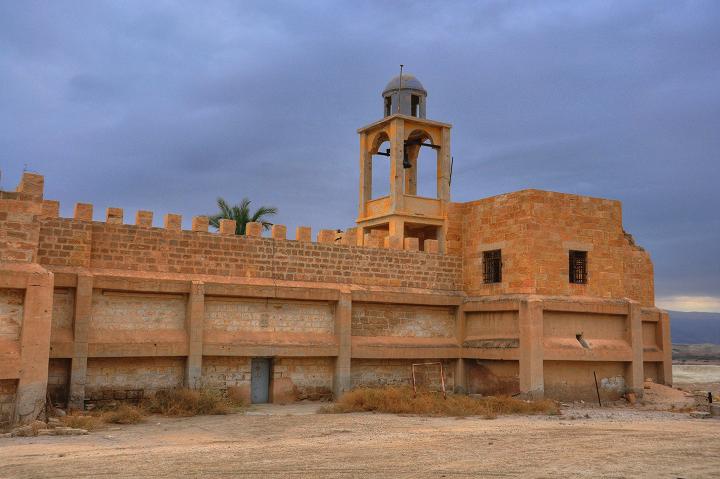 The rear entrance to the monastery, which looks like a fortress, is shown below. 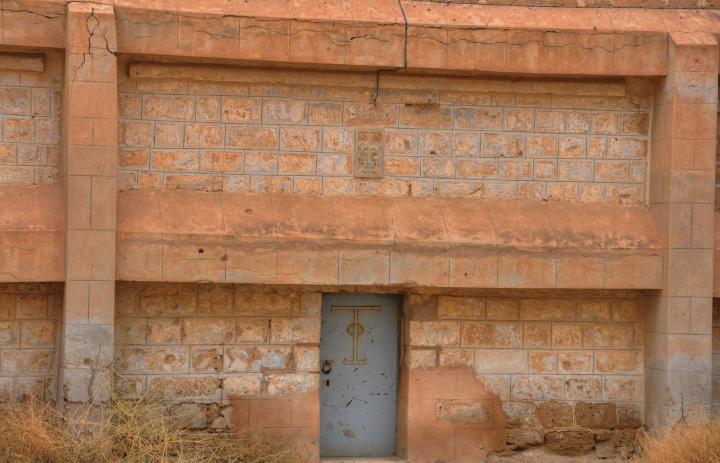 A detail of the tablet above the entrance is shown below. The Greek initials ICXC NIKA stands for "Jesus Christ conquers". 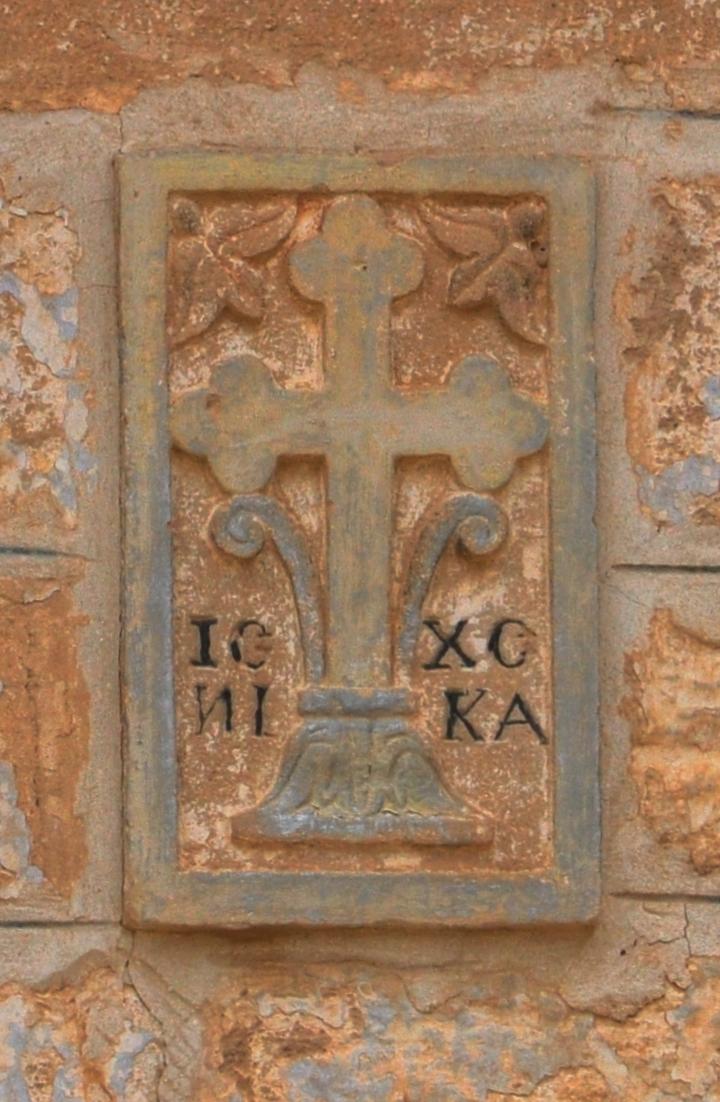 To the west of the site are large palm plantations. The area around Jericho is famous for its palm trees and dates, and the Bible always adds the suffix of "city of palms" to Jericho (for example, Deuteronomy 34 3: ""And the south, and the plain of the valley of Jericho, the city of palm trees").

Doron, a relative of webmaster Rotem who resides in the Jordan valley settlement of Gitit, manages the palms plantation near the entrance to the baptismal site. He - and his wife Adi - coordinated our tours, and were proud to show this wonder of growing trees in the dry and harsh wilderness. 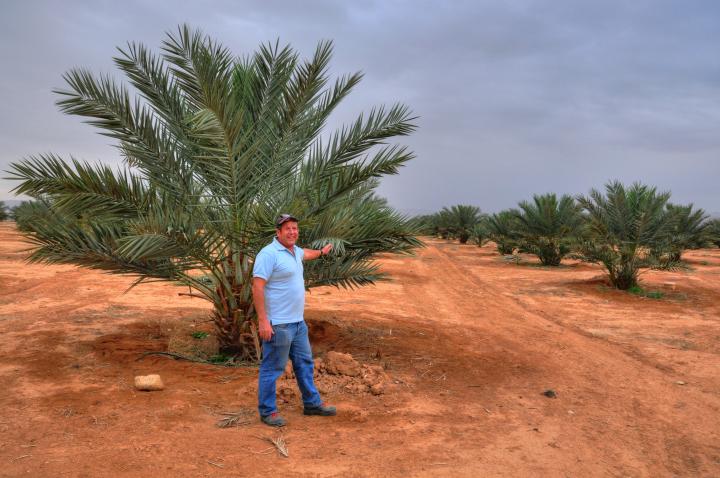 This desert area is very dry and hot, and the Jordan river is also practically dry due to the heavy pumping upstream of the sources of the Jordan.  Therefore, the trees are watered by a special pump and filtration system. 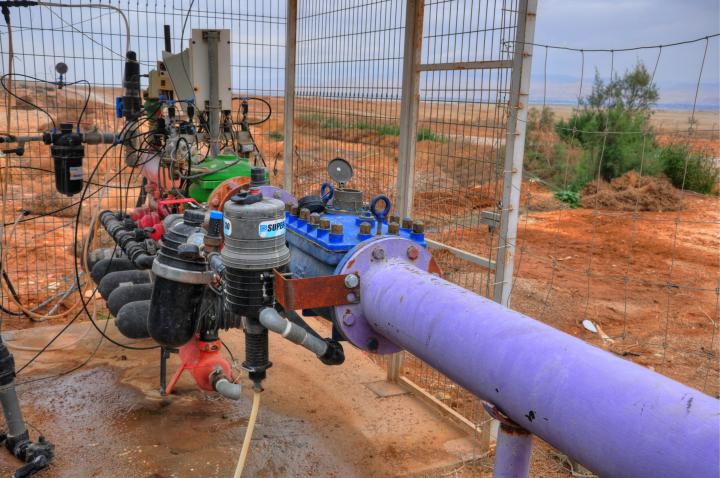 "These things were done in Bethabara beyond Jordan, where John was baptizing.  The next day John seeth Jesus coming unto him, and saith, Behold the Lamb of God, which taketh away the sin of the world. This is he of whom I said, After me cometh a man which is preferred before me: for he was before me. And I knew him not: but that he should be made manifest to Israel, therefore am I come baptizing with water. And John bare record, saying, I saw the Spirit descending from heaven like a dove, and it abode upon him. And I knew him not: but he that sent me to baptize with water, the same said unto me, Upon whom thou shalt see the Spirit descending, and remaining on him, the same is he which baptizeth with the Holy Ghost. And I saw, and bare record that this is the Son of God.."

" Then Jesus came from Galilee to the Jordan to be baptized by John.  But John tried to deter him, saying, "I need to be baptized by you, and do you come to me?" Jesus replied, "Let it be so now; it is proper for us to do this to fulfill all righteousness." Then John consented. As soon as Jesus was baptized, he went up out of the water. At that moment heaven was opened, and he saw the Spirit of God descending like a dove and lighting on him.  And a voice from heaven said, "This is my Son, whom I love; with him I am well pleased." "

"At that time Jesus came from Nazareth in Galilee and was baptized by John in the Jordan. As Jesus was coming up out of the water, he saw heaven being torn open and the Spirit descending on him like a dove. And a voice came from heaven: "You are my Son, whom I love; with you I am well pleased."

"When all the people were being baptized, Jesus was baptized too. And as he was praying, heaven was opened and the Holy Spirit descended on him in bodily form like a dove. And a voice came from heaven: "You are my Son, whom I love; with you I am well pleased."

According to KJV version of John, the place was called "Bethabara". In Hebrew this may mean "the house of the crossing" of the river of Jordan. There were many crossings along the river, and a probable place will be closer to the Sea of Galilee.

This text describes the departure of Elijah on the chariot of fire, an event that occurred on the Jordan river near Jericho: