The fortress of Hunin ("Castellum Novum") was a Crusaders frontier stronghold in the Upper Galilee, built on top of a steeply slopped mountain, which commanded the road from Tyre, through Banias, to Damascus. It was built in two phases by the Crusaders, then rebuilt during the Ottoman period. After the great earthquake of 1837 most of the fortress lies in ruins.

The site is located 600m above the fertile valley, on the north side of Moshav Margaliot, and 500m east of the Lebanese border.

A map of the area around the site is shown here, with indication of the major points of interest. The citadel is marked with a yellow square, and to the south of it are ruins of the ancient courtyard (covered by a forest) and the Arab village.

To get to the site, drive to Moshav Margaliot from Kiryat Shemona, and park on the south east side of the fortress. 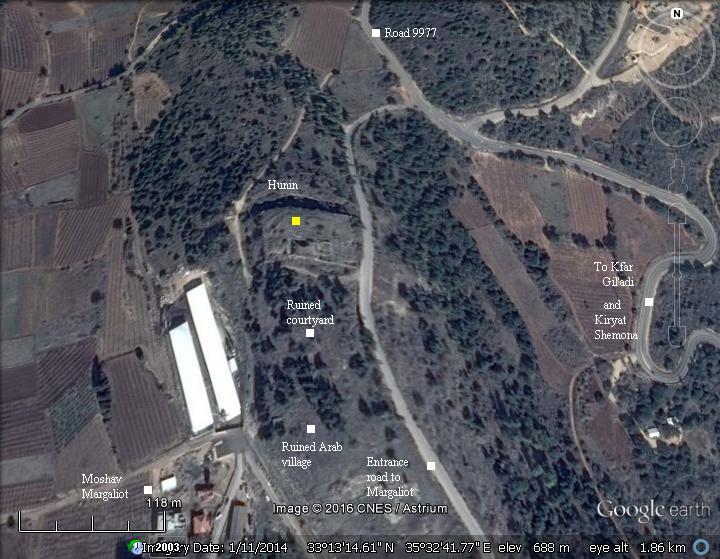 The archaeologists found that that an earlier settlement, dated to the Iron Age I (1200-1000 BC), existed on the hill before the construction of the Crusaders fortress.

Some scholars identified the Biblical city as Janoah, one of the cities captured by Tiglath Pileser in 734 BC following the mutiny by Pekah son of Remaliah King of Northern Israel, together with Rezin King of Aram-Syria (2 Kings 15:29): "In the days of Pekah king of Israel came Tiglathpileser king of Assyria, and took Ijon, and Abelbethmaachah, and Janoah, and Kedesh, and Hazor, and Gilead, and Galilee, all the land of Naphtali, and carried them captive to Assyria.".

Other scholars identify the city of Janoah in the nearby ruins of Khirbet Niha (Noha), 3 KM to the north.   Yet another identification by Y. Aharoni is farther to the east, closer to Acre.

A Biblical Map shows the area of the site, in the Upper Galilee area.  Janoah, later Hunin, is marked by a red marker, on the side of a main east-west road.  Other cities of the Assyrian conquest are also marked on the map, with the major roads of that period. 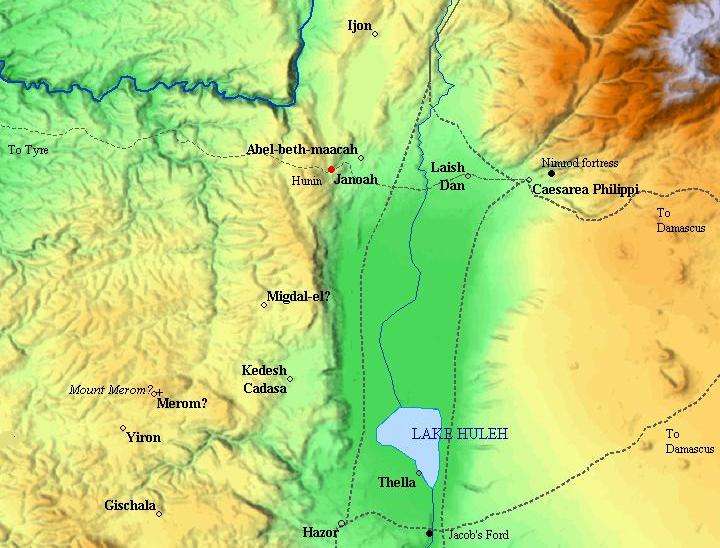 The area around the site (marked in red)  - during the Biblical  periods  (based on Bible Mapper 3.0)

" 'Hunin, according to the same authority, is the ancient Beth Rehob, or Rehob (Numbers xiii. 21 ; Judges xviii. 28; 2 Sam. x. 6, 8). The Danites came to Laish 'that is by "Beth Rehob.' Now Laish is identified with the modern Tell el Kady, which is close by. Also the spies searched the land 'unto Rehob, as men come to Hamath.' Now the direct way to Hamath lies through the Wady et Teim. Thomson, on the other hand, inclines to the belief that Banias is Beth Rehob.

' Two-and-a-half hours' journey to the north of Kades lies the celebrated Hunin ; on our way, one of the Haroseth Haggoim, or Gentile cities, from which in Christ a great light shall spring up (Matt. iv. 15), Hunin lies 2,500 feet above the level of the sea : it is the ancient capital of Jabin, the Hanana of the "Notitia dignitatum," where the "equites sagitarii indigenre" lay (Reland, 230), and proves itself by its foundation of unhewn masonry one of the oldest works built by human hands.'

The site on which the ruins are located was inhabited during these times. The survey identified ceramics, remains of walls and cisterns.

The first castle was built by the Franks in 1106-1107, as an initiative by the prince of Galilee Hugh of St. Omer to defend the northern Galilee against the Muslims in Tyre. Another fortress ("Toron") was built at the same time in Tibnin, 12km west of Hunin, also on the same trade route. The castle was built above the ancient mound, and consisted of a rectangular plan. During this phase, there was no moat.

Part of the fortress was sold to the Hospitallers order in 1157, so they could defend it, but they sold it back in the same year.

Nur ad-Din (1118-1174), the Emir of Damascus and Aleppo, was a devoted enemy of the Crusaders in Syria. He managed to defeat the Crusaders in several battles in Syria. After perfecting their inferior techniques of siege, Nur ad-Din was successful in capturing Crusaders fortresses within a short time before reinforcements would arrive to relieve the pressure. He captured the two strong castles in the Northern part of the Holy Land - in 1164 the nearby fortress in Banias (Nimrod fortress), and in 1167 Nur ad-Din captured the Hunin fortress.

Hunin was actually abandoned by the Crusaders a day before Nur ad-Din arrived, after the Muslim forces managed to capture several Northern castles. They set it on fire and shamefully fled. After Nur ad-Din reached the empty castle, he destroyed its walls and razed the fortress.

The 16 year old King Baldwin IV ("the Leper"), with an outnumbered army, defeated the Saladin army in the battle of Montgisard, near Ramla (Nov 1177). This encouraged the Crusaders to strengthen their  positions.  In 1178 the Crusaders rebuilt the Hunin fortress, at the same time they built a new fortress at Jacob's Ford.  Both castles were part of the plans of King Baldwin IV to solidify their northern frontiers.

This time the Crusaders added a deep and wide moat in order to block the siege machines that the Muslims used in their recent conquests. The construction was managed by Humphrey II of Toron (Tibnin). After Humphrey's death in 1179, the castle was passed to King Baldwin IV.

However, the new Muslim siege machines overcame the renewed fortifications. In January 1188, nine years after the second construction began, Saladin captured Hunin.  The Muslims continued to hold the fortress until 1218, then destroyed it.

In 1266 the Mamluke sultan Bybars captured the area, but did not repair the fortress as the main route has shifted to the crossing at Jacob's ford.

In the 18th Century a Bedouin named Daher el-Omar mutinied against the Ottoman empire,  capturing the area of the Galilee and establishing a self governed province in the years 1730-1775.  Daher and his family fundamentally reshaped the Galilee landscape by building fortresses, warehouses, khans and administrative buildings.

The fortress built by Daher el-Omar included the vaulted halls that stand today, and some of the walls and the western towers. A Shi'ite village was founded on the south side of the citadel.

The fortress was severely damaged in the earthquake of 1837, which also destroyed the fortress in Safed. However, the village of Hunin continued until 1948. 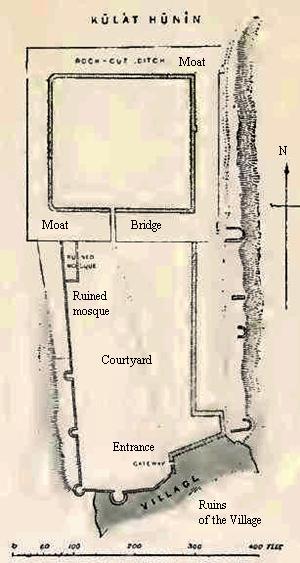 They also described the condition of the ruins (see their illustration below):

"The ruin of the modern work was effected by the earthquake of January, 1837, since when no part of the castle has been habitable. With regard to the marginal drafted stones, Robinson says ('Biblical Researches,' 1852):

' In the northern portion no remains of antiquity are visible except a few small bevelled stones on the eastern side, and also near the Turkish portal in the south side. Here is a bevelled stone of larger dimensions, A few other bevelled stones are found indifferent parts, and some are built into the walls of the houses of the village. In the village, outside of the later fortress, is a fine ancient portal, nearly complete, built of large bevelled stones still in their place, with grooves for the doors ; it is the finest fragment among all the remains. A peculiar feature of this ruin consists in several pieces of ancient wall built of unhewn stones, that is, of stones broken to a smooth face, but not squared, and laid up in this rude, irregular manner. Such fragments of wall are found in several parts of the fortress". 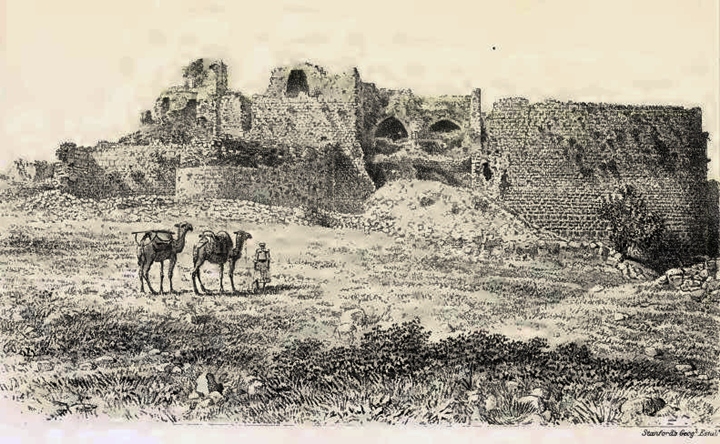 Illustration from the PEF report, page 124a

The PEF survey illustration shows a better state of the walls and structures than exists today, as the villagers robbed and reused most of the stones for their houses in the village of Hunin.

The fortress was severely damaged by the 1837 earthquake, and most of it is ruined. A conservation project repaired some of the damages, and hopefully future works will be conducted here.  The ancient courtyard to the south of the citadel, and the Arab village to the south of it, are now totally destroyed and covered by a forest.

A new Moshav settlement of  Margaliot ("pearls") was founded in 1951 south of the site, settled by Jewish immigrants from Yemen and Iraq.

The site is opened to the public, but use caution while entering the structure.

An aerial view of the ruined fortress was captured by a drone from the south side.  Most of the fortress is now gone, and only the standing structure on its south side is the major architectural element left. Its area, covering the entire green area, was 60m by 90m (5.5 Dunam).  A  wide moat once surrounded the walled complex, but now it is mostly filled with earth. 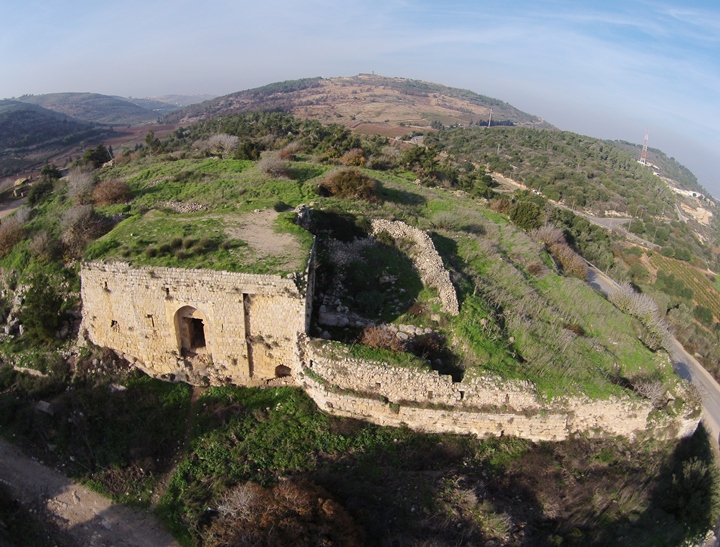 The modern road to Moshav Margaliot passes on the east side of Hunin. On the south east corner of the fortress was one of the round corner towers, which were built during the 18th century.  The towers do not project outside the line of the walls.

Along the left (south) side of the walls was once a 12m-14m wide moat. 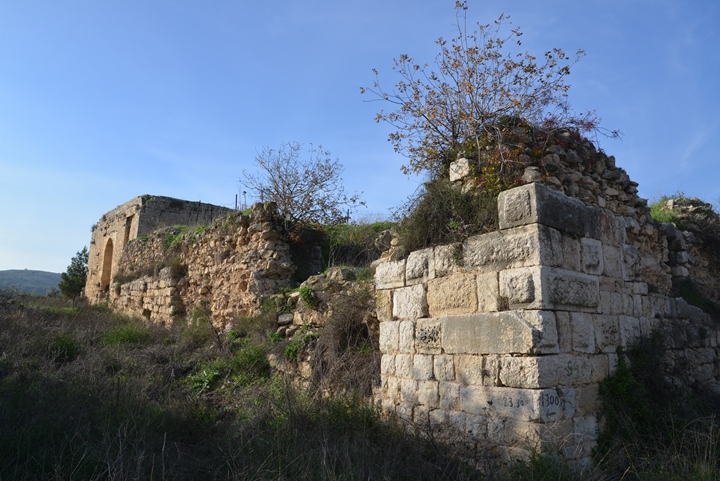 Another view of the southeast walls is in the next photo. The walls have a variety of different building materials, as the fortress was built and rebuilt several times. 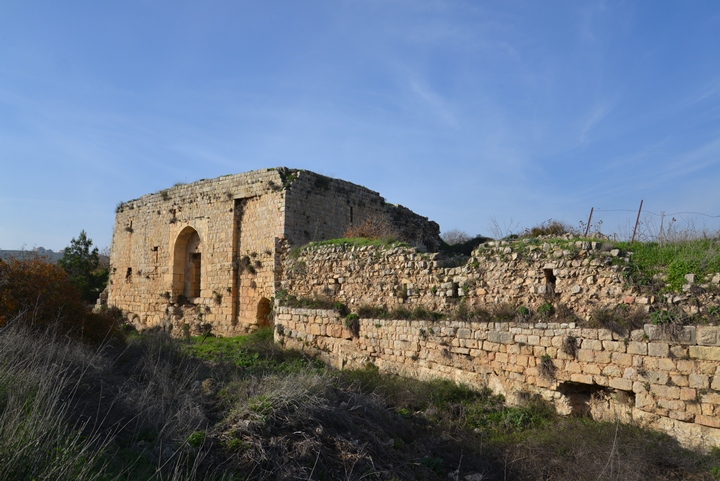 Ancient stones were reused in the Ottoman period reconstruction of the wall, as seen in the following photo on the west side of the gate. 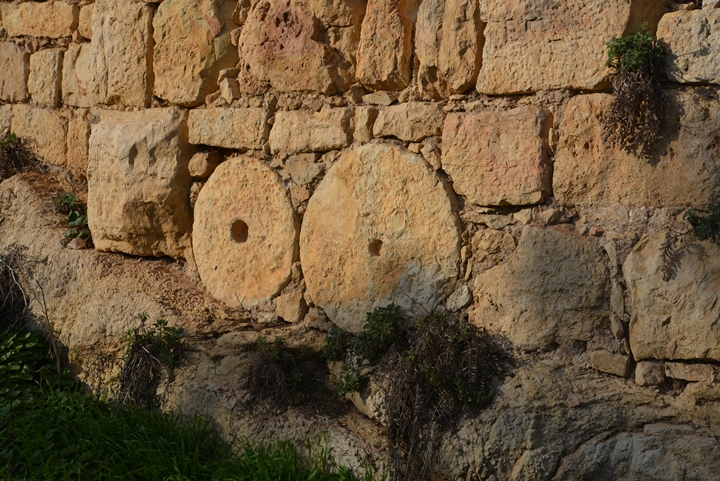 The standing vaulted structure, on the south side of the ruined fortress, is dated to the 18th century (Ottoman period, Daher el-Omar) . It stands at the place where the Crusaders period gate was located, on the edge of the southern moat.   During the Crusaders period, this arched entrance was facing  a drawbridge that crossed over the moat.  It allowed the defenders to cut the access into the citadel during an enemy attack. 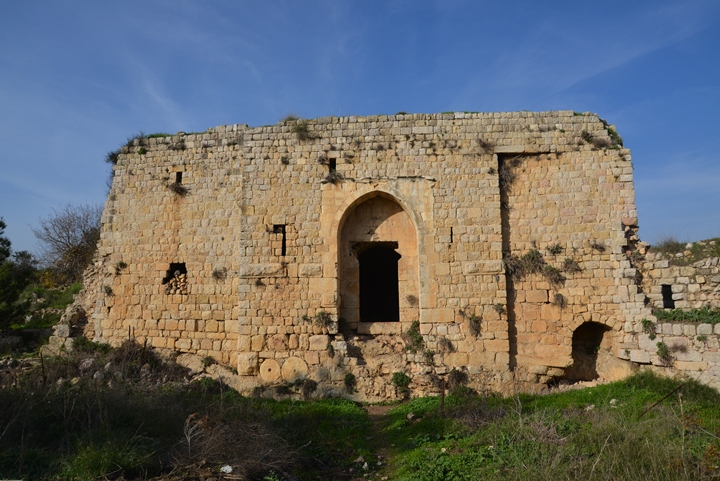 The earlier Crusaders structures are now gone, but their remains were identified on both sides of the structure as square towers, separated by 20m, with a curtain wall between them. These towers belonged to the first phase of construction. Each tower is built with 3m walls, with an area of 13m x 13m, and built 5m away from the southern wall.

Stepping inside into the structure is a long rectangular hall. It covers an area of 200 square meters, and its roof is supported by 3 cross vaults. 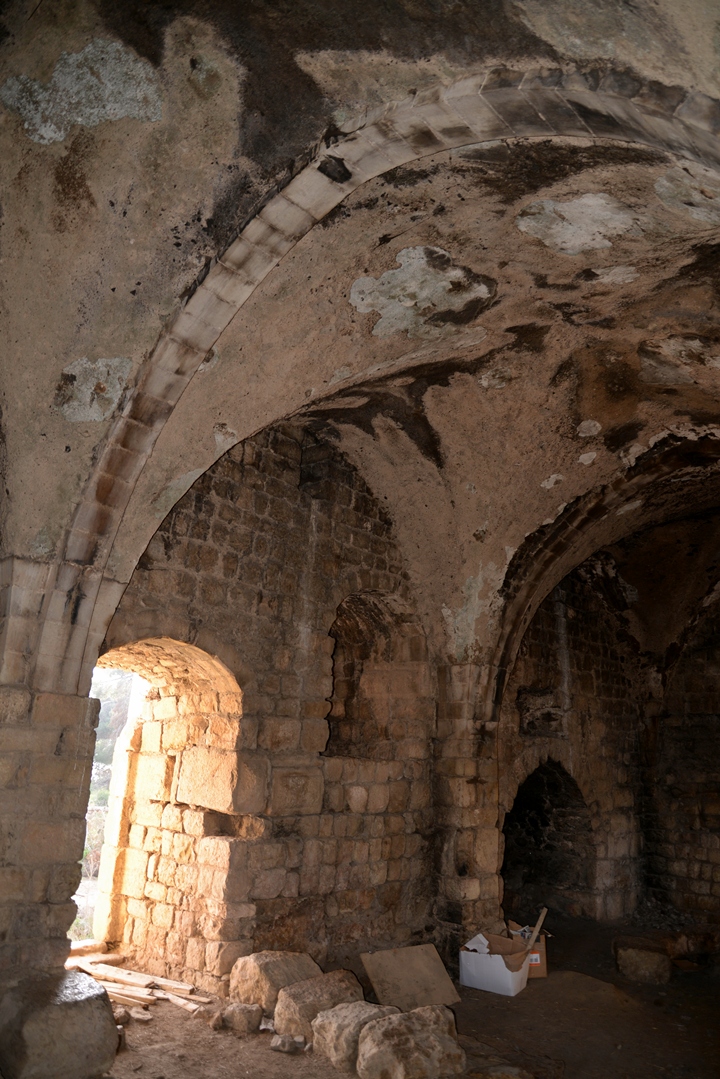 The vaulted hall connects to three halls on its north side, and two on the west and east side. This photo shows the western opening on the right side. 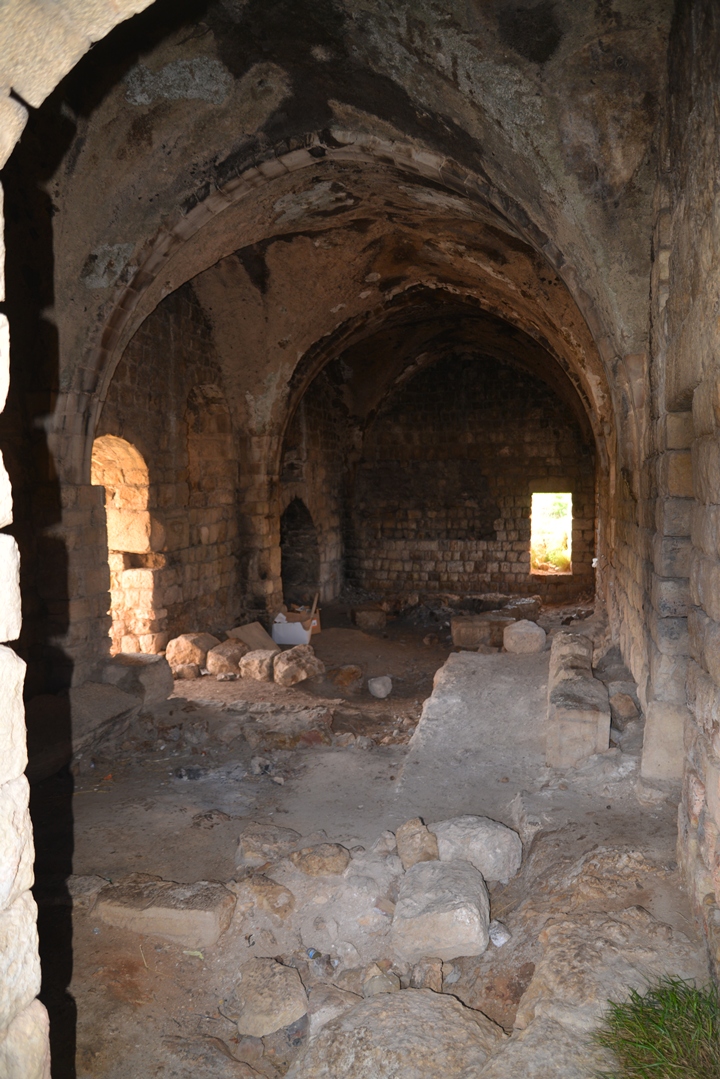 A closer view of the opening on the west side: 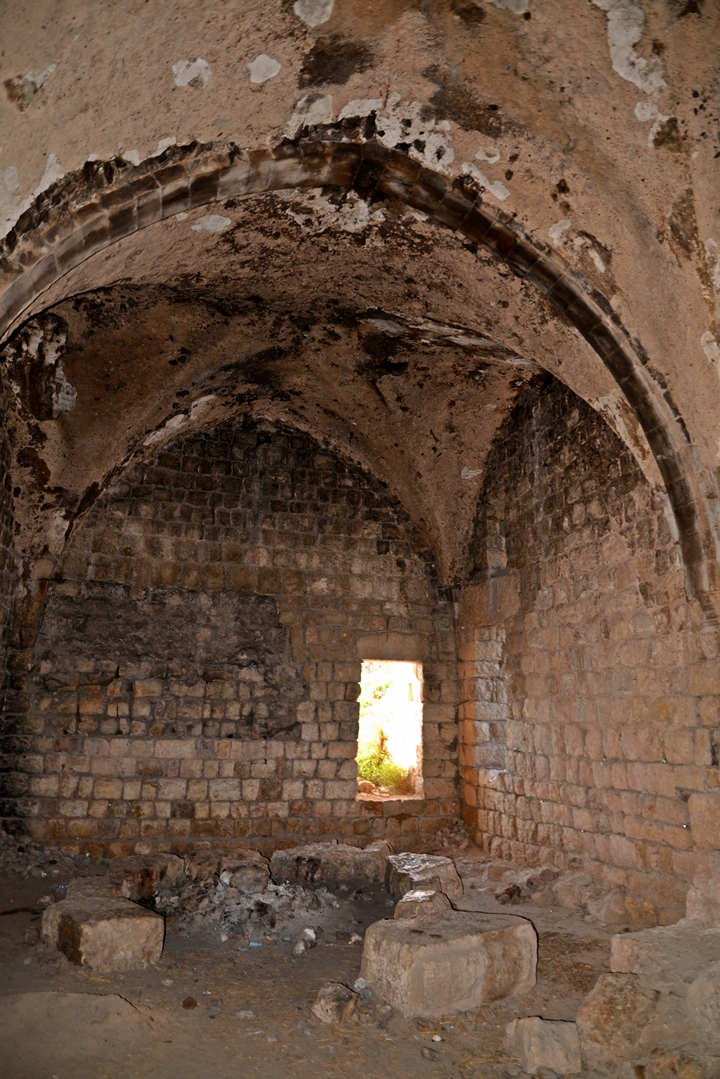 The next photo shows the south west corner of the hall.

As can be seen, remains of parties and campfires are found on the floor.  When we visited the site, a small group of young students from a nearby college came to pass time here.  A friendly request: as this is an unattended historical site, please keep the place clean. 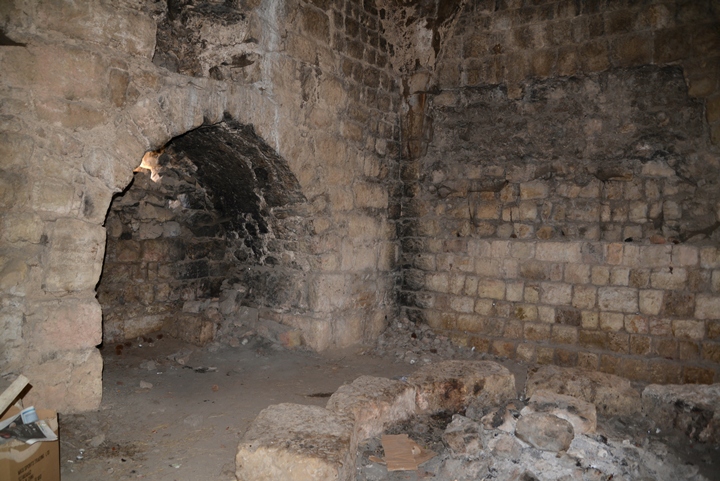 Another view of the southern entrance: 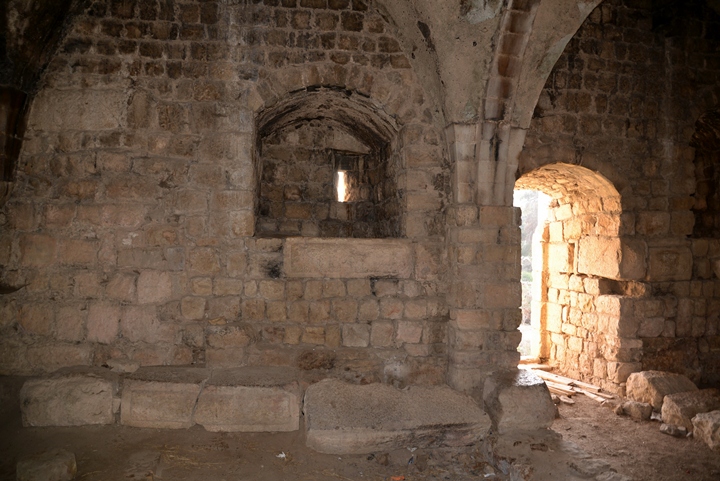 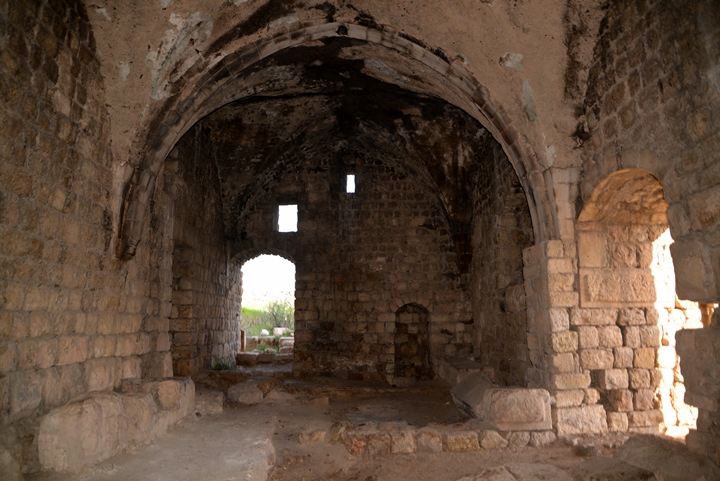 Stepping out of the vaulted structure is an open area. 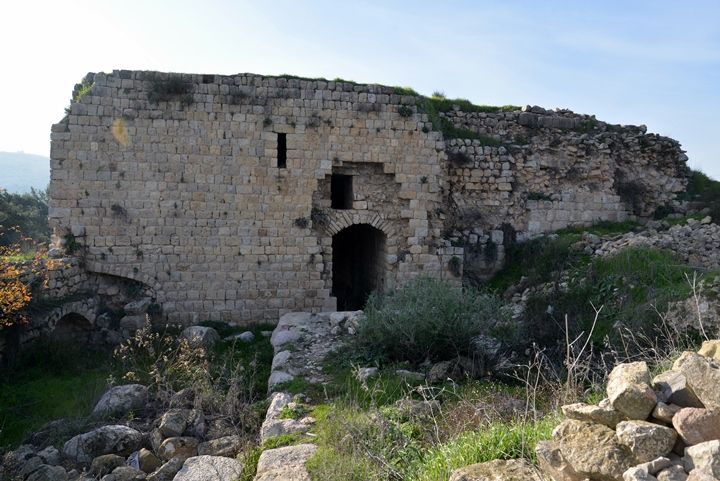 There are 3 long halls perpendicular to the main hall. This one is the east most hall which is in good condition, while the other two halls are ruined to their bases. 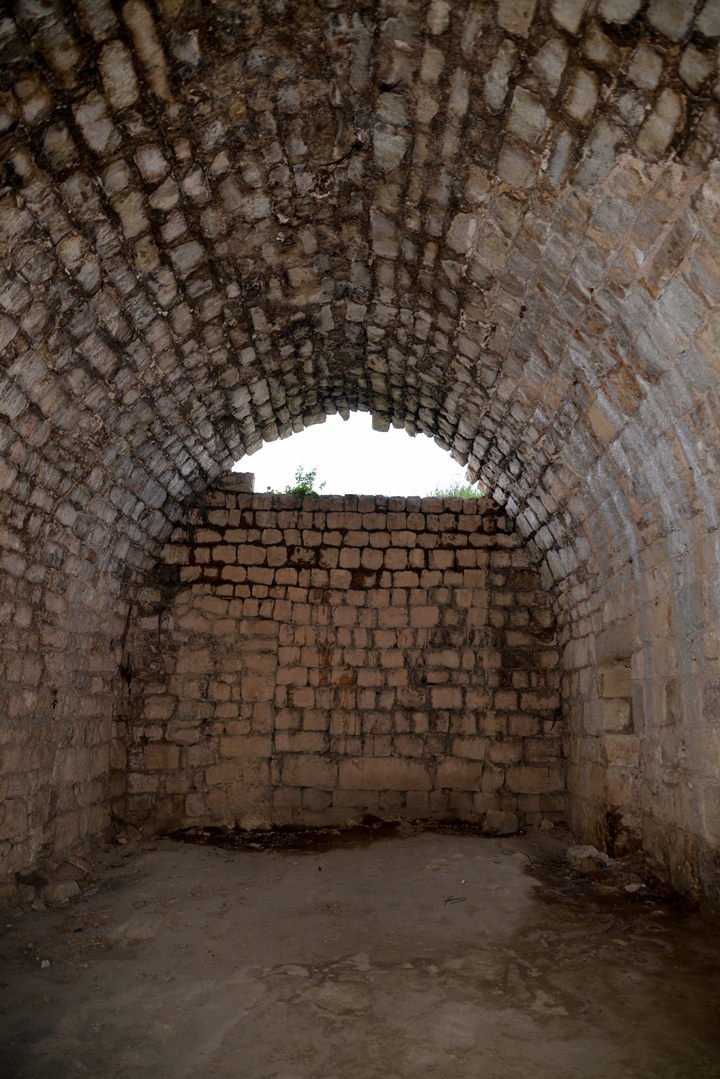 The central hall is ruined, but on its northern side is an entrance to an ancient underground water cistern.