One of the most exciting excavation areas, conducted in the area of the City of David.

Extensive excavations are conducted since 2007 in the Giv'ati car park, an area south of the Dung gate and adjacent to the entrance of the City of David archaeological park.  The site includes findings from different layers of the city, spanning periods from the Iron Age to the Middle ages.

The excavation site is located south of the Dung gate, 30m from the Ottoman walls, covering an area of 3500 square meters. The location of this area, and other sites in the area of the "City of David",  are shown in this aerial view.

Clicking on a yellow square will jump to the selected point in this page or other web pages.

For a comprehensive description of the first temple history of this section of Jerusalem, see the city of David

After the Persians defeated the Babylonians (539BC), and King Cyrus "the Great" allowed the Judean exiles to return back to Israel (Zion) and rebuild their temple in Jerusalem (516 B.C.).

Herod the Great, King of Israel under the Romans (37BC - 4BC), enlarged and rebuilt the second temple, and made it a magnificent temple. Herod reshaped the city, constructing public houses, streets, bridges, tunnels, and fortifications. An illustration of  Jerusalem at the end of the 1st Century B.C. and the beginning of the 1st Century A.D., is shown here with the city's major points of interest.

The general  area of the excavations, south of the temple mount, is marked as a yellow ellipse. The findings included structures from the different periods, starting from the Iron age and the Hasmonean period. 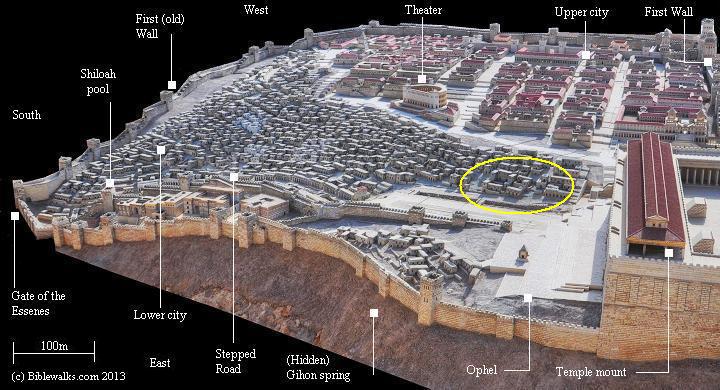 The temple, and many parts of the city, were destroyed by the Romans in 70 A.D.  Evidence of the destruction were found in this excavation. During the late Roman and Byzantine periods the area was rebuilt as part of the Aelia Capitolina city.

Eli Shukron and Ronnie Reich (IAA), assisted by El'ad Association, conducted a trial excavation from May to December 2003. This was followed with several seasons of excavations, directed by Dr. Ben Ami and Yana Tchekhanovets.

A general view of the excavations, as seen from the entrance on the east side, is seen here.  The tall concrete walls, built to reinforce the deep cavity,  were constructed along its sides. Beyond the wall, on the right side, is the road along the old city walls. The buildings in the background are part of the western section of the village of Silwan. Behind the green cloth cover, on the right side, is an exit from the central drainage canal, an underground water channel dated to the second temple period. 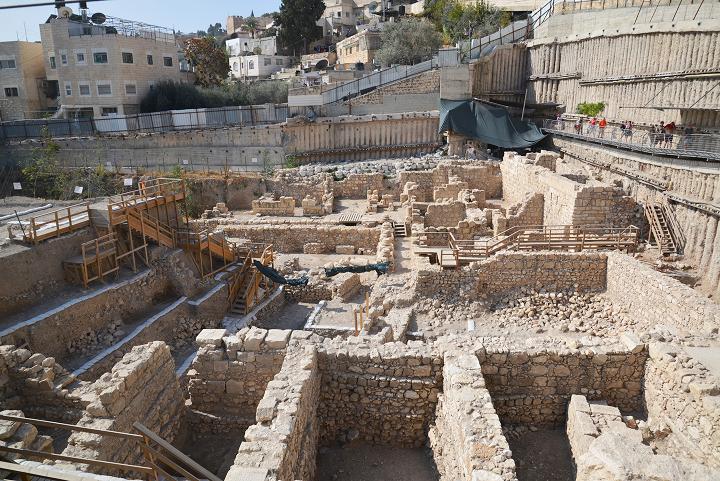 The next photo is viewed towards the south.  Notice the number of layers of excavated structures, where older layers are generally located in deeper levels. 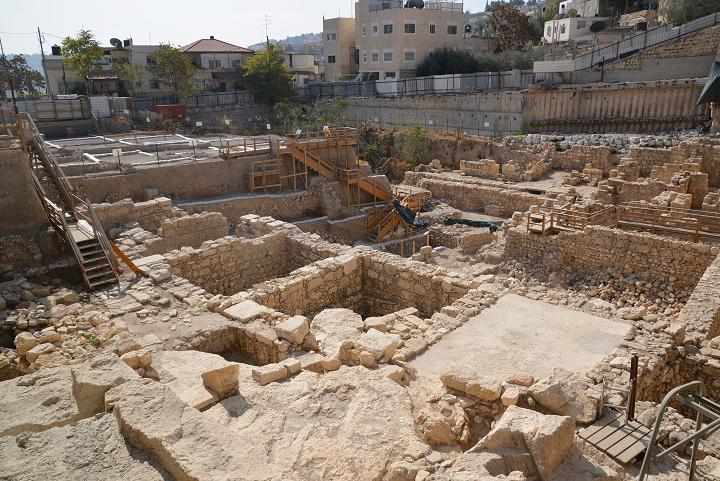 A view from the north-west corner of the area is shown below. The entrance to the City of David archaeological park is located behind the fence. 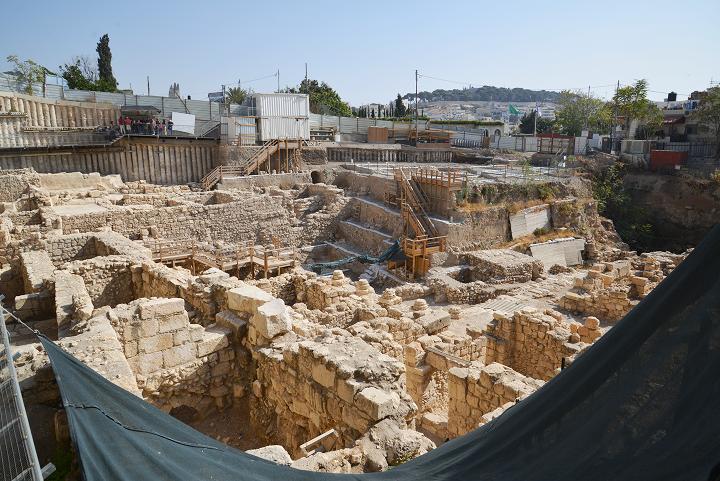 The following sections are arranged in the order of the periods, starting from the Iron Age.

Four layers dating to the Iron age were discovered in Givati parking lot, dating from the 9th-8th Century up to the 6th-7th Century B.C.

The earliest findings in this excavation site were built on the bedrock. The structures were densely built houses of poor condition, with single stone wide walls. Above this layer was a layer of ruins dated to the 7th and 6th Century B.C. 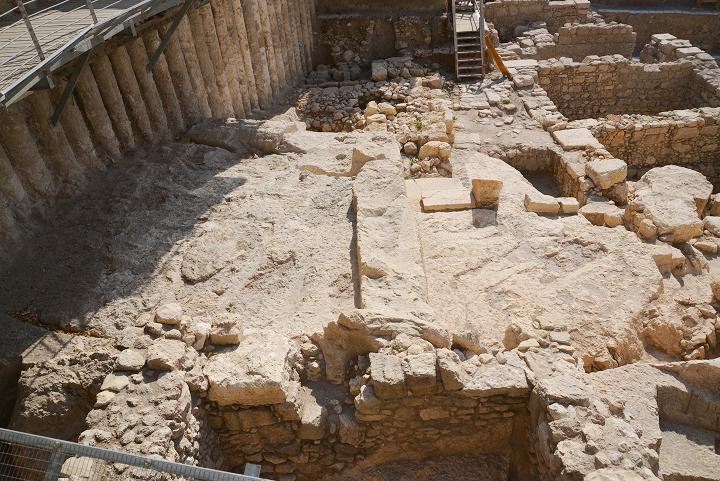 The headlines of the report was:   " 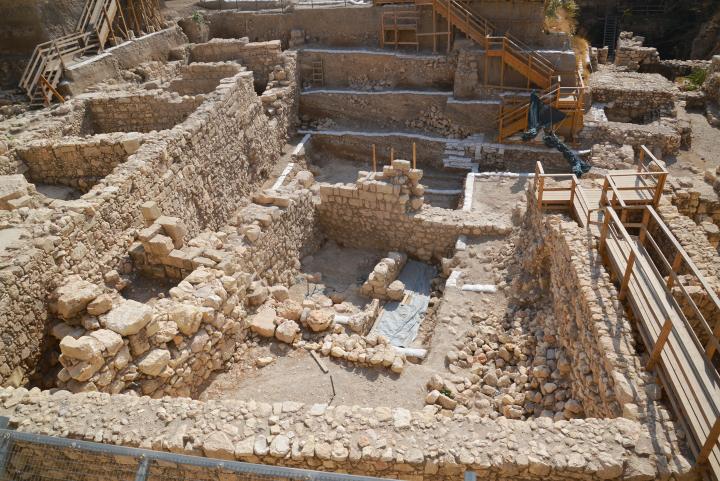 The report gave details on the structure, which is seen in greater details below: 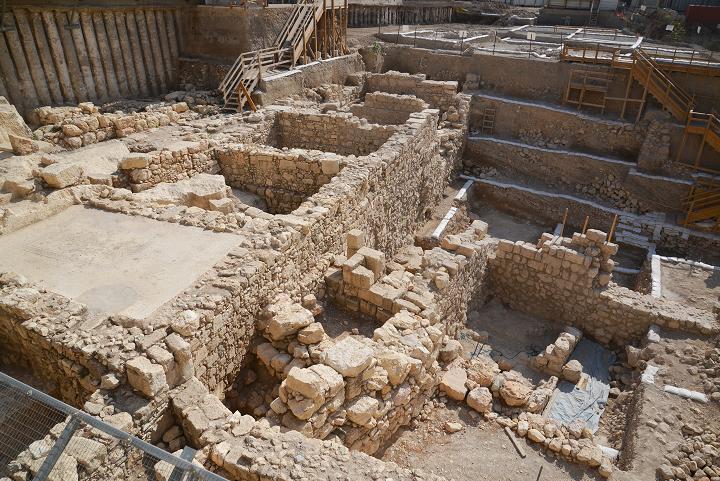 A structure dated to the second temple period were discovered on the south side of the excavation, directly below the complex of the Roman/Byzantine level. This was a building of impressive dimensions, and may have been a part of the palace of Queen Helene of Adiabene. Its walls rise to a height of more than 5 meters and were approximately 2 meters wide. It has a basement level was built of vaults made of neatly dressed white ashlars stones. The walls were plastered and decorated with colorful frescoes.

In the northern section of the structure, several water systems were found, including two ritual  baths (miqveh). This ritual bath, seen from the north side, has steps descending from the west side. The pool was cut into the ground, but now hewn in the bedrock. A nearby square cistern supplied the water to the ritual baths. A plastered bath was also found near the miqveh. 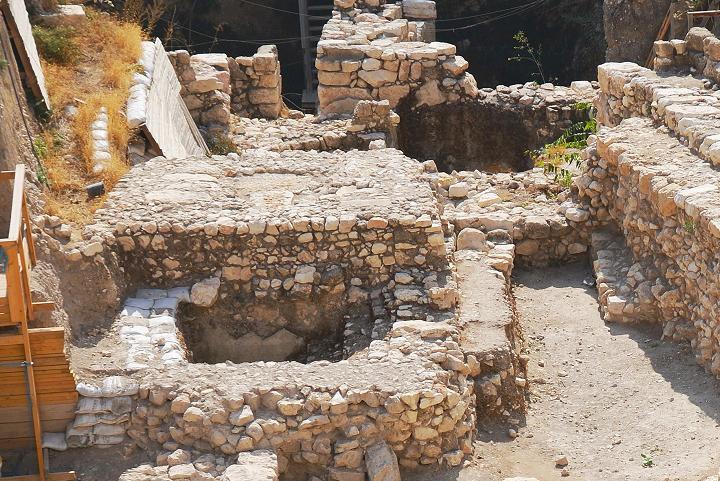 The structure was destroyed during the end of the great revolt against the Romans (70 A.D.). Enormous fieldstones were toppled from the tops of its walls into the building and onto the vaults in the basement level causing their collapse.  This discovery was reported by the IAA (Jan 2008):

More than a hundred years after the destruction of Jerusalem, the Romans constructed a large mansion, which covered most of the excavated area. The complex extended to the north (right), which is now covered by the road along the south side of the old city walls. 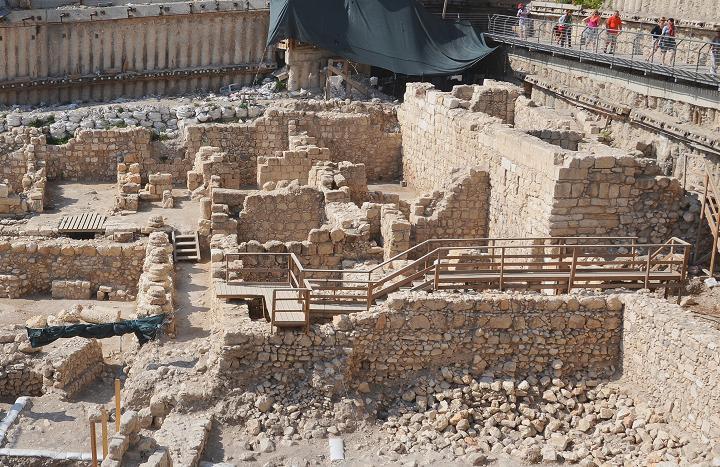 The Roman mansion covered an estimated area of 1,000 square meters in the area which is visible, and probably another similar size buried under the road on the north side. This large complex was built in the Roman period (3rd Century), and had a plan of a number of rooms located around a large open courtyard.

This photo shows the south side of the mansion, with remains of the surrounding columns, which held the roofed structures (porticoes) that surrounded the courtyard. 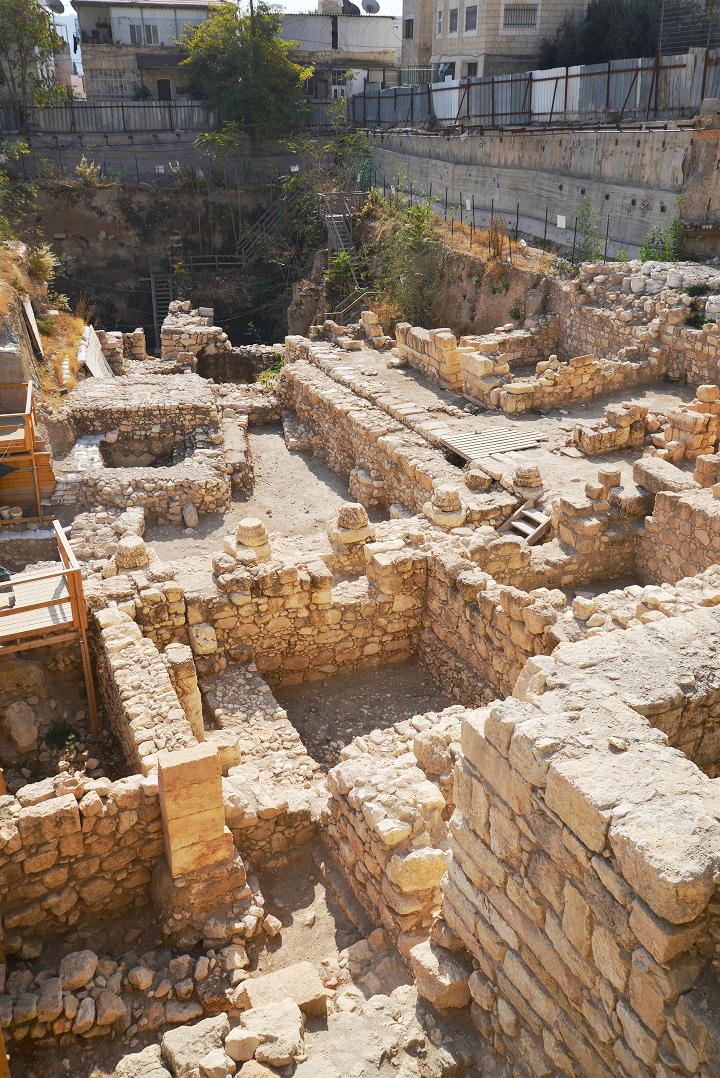 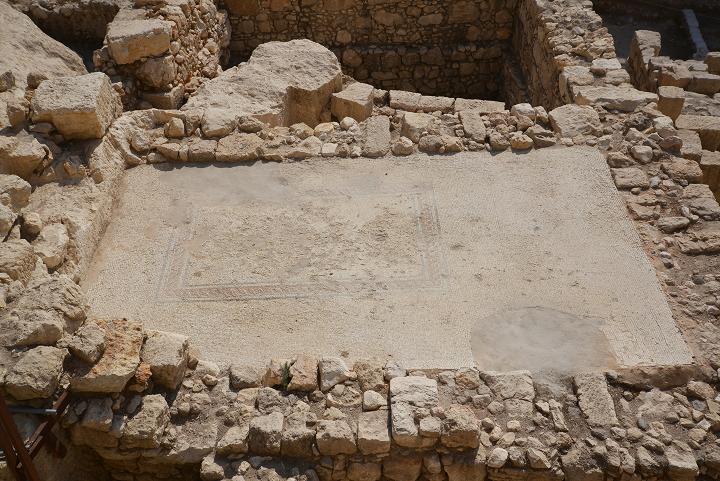 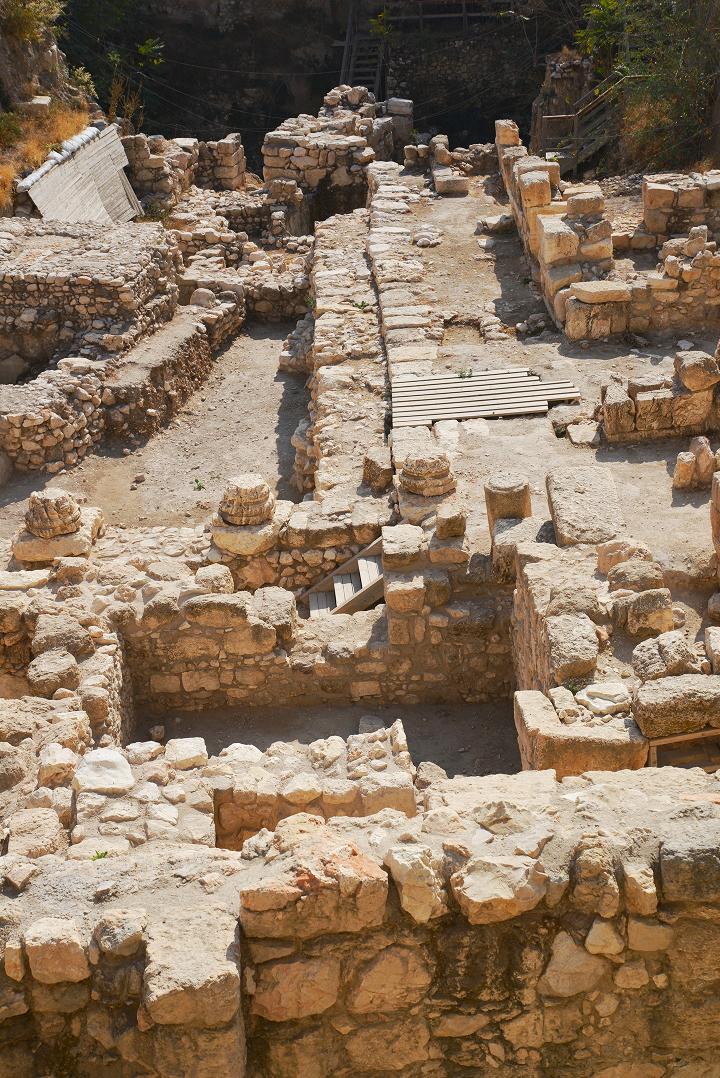 The Roman mansion collapsed in the middle of the 4th Century. A.D. (the Byzantine period), following the major earthquake on May 18/19 363 which caused damages in the Galilee and some damages in Jerusalem. Its second floor crashed down on the first floor.  Rather than repairing the damage, the remains of the house were covered with a high level of garden soil, a meter or more, on its south side. 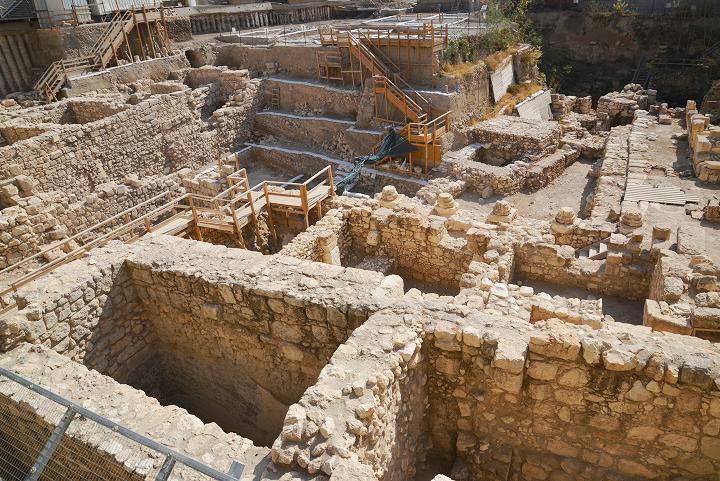 The complex was probably the residential place of a high ranking official in the Byzantine administration. 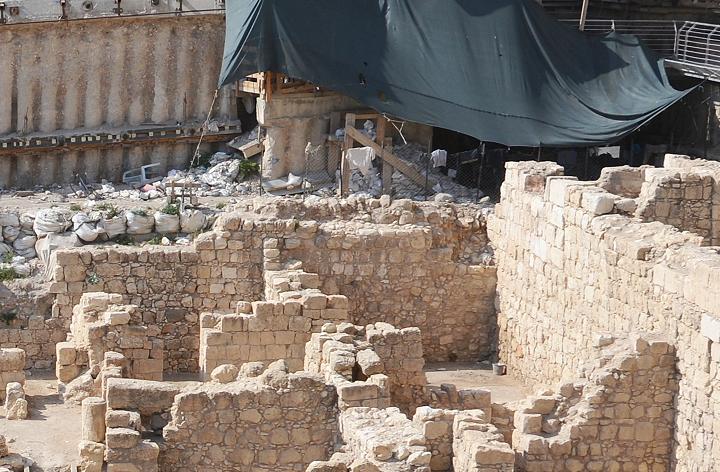 The next photo shows an arch inside the wall of the lower floor of the Byzantine mansion. The mansion had at least two floors. 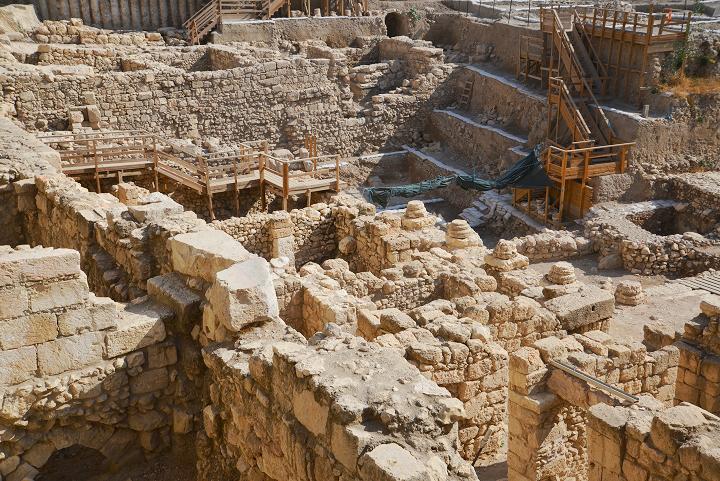 An impressive hoard of gold coins were found inside one of the rooms, dated to the 7th Century.

These mint, unused gold coins suggests a dating for the destruction of the Byzantine mansion, which occurred probably during the Persian conquest (614). The walls were toppled and the rubble filled up the rooms, thus ending the Byzantine chapter in the history of the city.

Remains of the Early Islamic period were discovered above the Byzantine period level. One of the findings included a Hebrew inscription on a marble slab bearing the name Bar Yaakov, perhaps belonging to the Jewish residential quarter which was established after the end of the Byzantine period.

Numerous interesting findings were uncovered in these excavations. Here are samples of the findings, as reported by the Israeli Antiquities Authority (IAA):

BibleWalks.com - revealing the layers of the Bible history