Deir Qal'a ("Monastery of the castle") are the ruins of a Roman fortress and Byzantine monastery. It is located in Western Samaria, near the communal village of Peduel.  The massive Roman fortress is dated to the 4th or 5th Century, while the large church (47m x 45m) is dated to the 6th C. This was a fortified station situated on crossroads of major Roman roads.

An aerial map of the area indicates the major points of interest in the area of Deir Qal'a, which is marked by a  yellow  square. The site is located on a steep ridge that overlooks the valley of the Nahal Shiloh stream. Other ruins of Byzantine period monasteries are located in its vicinity. The entrance to the ruins is through the west gate inside the village of Peduel, near the army preparatory (Mechina kdam-tzvait). 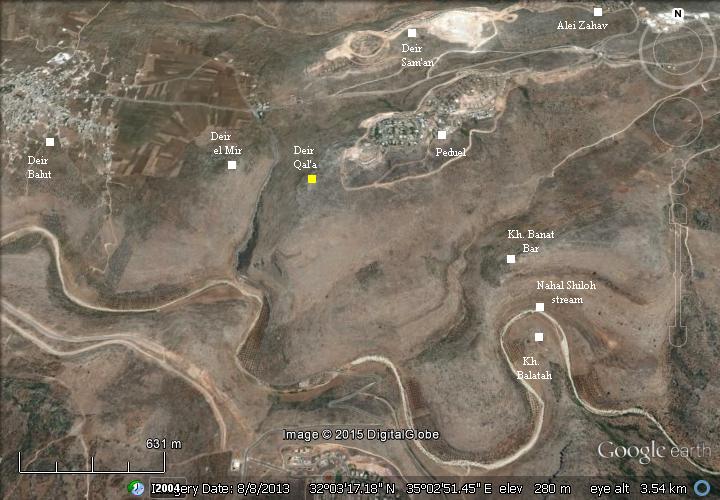 A mighty fortress was built here in the fourth to the fifth century, in order to protect the strategic roads that passed in the valley of Nahal Shiloh. The location of the fortress was selected to be constructed on a very steep and defendable hill, and was built with high walls and towers. It controlled a strategic location, at the crossroads of two major Samarian roads, and a regional route along Nahal Shiloh.

A second phase of construction changed the fortress into a monastery.  During the 6th Century, a church was added in the open courtyard, with additional changes to the structures.

Deir Qal'a has strong similarities to Deir Sam'an, 1.5km northeast of the site, with similar construction methods and two stages of construction - a fortress in the late Roman period and then a monastery during the Byzantine period.

According to the archaeologist Y. Hirschfeld, who conducted a survey in Samaria and this site, the large number of monasteries in the area were built in order to protect the Christian villages in the area south of Nahal Shiloh, following the Samaritan uprisings in the 6th century.

The monastery was abandoned during the Early Islamic period, went out of use during that period, and remained in ruins since then.

Conder and Kitchener surveyed this area during the Survey of Western Palestine in 1882.  They reported on their account of the site - spelled Deir Kulah - with great details that are reserved for important sites.

The Birkeh measures 111 feet north and south by 34 feet breadth. It is cut in rock, and 15 feet deep; there is a sloping cutting at the sides, evidently to support the haunch-stones of a vault over it. The sides are in places built up to a level with rubble. North of this great tank are two smaller ones, 38 feet north and south, and respectively 18 feet and 9 feet wide. All these tanks are lined with a hard brown cement full of pottery.

No masons' marks occur on the stones, but on the outside of the south wall of the chapel several marks are rudely cut, two or three on one stone. These are probably the tribe marks of wandering Arabs,

as at Sebbeh. (Sheet XXVI.) They are as shown. The joints are well and firmly laid in the masonry. No pointed arches were found. The vaults are all tunnel form, and not groined. Rubble is used to form the core of the walls. The masonry in the interior is smooth and not drafted. All the characteristics of Crusading work are absent.

There are two caves on the west, one about 30 feet long, the other 20. The path ascends by steps. There is also a very large quarry east of the site, and a rock-sunk tank on the south-west.

The following architectural points are principally worthy of notice :

1st. The drafted masonry, resembling that of Justinian's work on Gerizim.

2nd. The cornice bent into an arch, as in a sixth century church

3rd. The semicircular arches, with a narrow keystone and broad haunch stones, and an odd number of voussoirs [ = elements of an arch].

4th. The flat lintels, with relieving arches above.

5th. The debased classical character of the cornice moldings.

These serve to indicate that the building is of the Byzantine period, and not Crusading.

The fortress, church, and an adjacent farmhouse, were excavated by Y. Magen and N. Aizik in 2004-2006, and reported in detail in Magen's book. They identified the site as a late Roman fortress (4th-5th C), which was later converted to a fortified monastery during the Byzantine period (6th C). They concluded that "this was one of the most important fortresses in southwest Samaria", as its walls reached three stories high, the towers protected it on the east, the narrow entrance to the fortress, and the steep hill that left it protected from three sides.

The site is accessed from the modern community of Peduel.

Photos of the site by Lorne Newman

The fortified complex is built along the foothill, and is terraced. Its exterior dimensions are 58m (190 ft) by 69m (226 ft), with the long axis directed north-north-east. The eastern wall is located along the continuation of the ridge, and was the weakest side of the fortress. In order to protect it from that side, a moat was dug along the wall, and a 10m (33ft) high tower was added on its south east corner.

This photo shows the southern wall. The walls surrounding the complex are of the late Roman period. 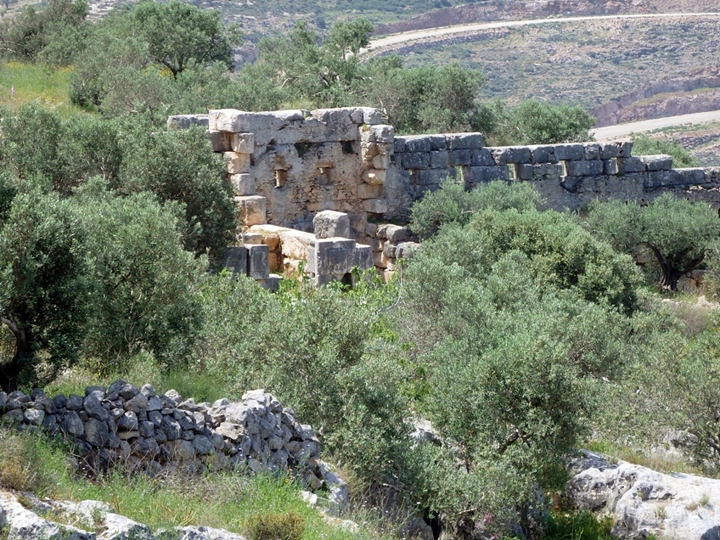 The main entrance to the fortress is located at the western end of the southern wall. It is narrow, approximately 90cm wide, in order to better protect the fortress.  On the lintel is a faint Latin cross standing on three hemispheres, which is the conventional sign of Calvary (Golgotha). A relieving arch, or space between the lintel and the arch,  is used in the construction of the doors. 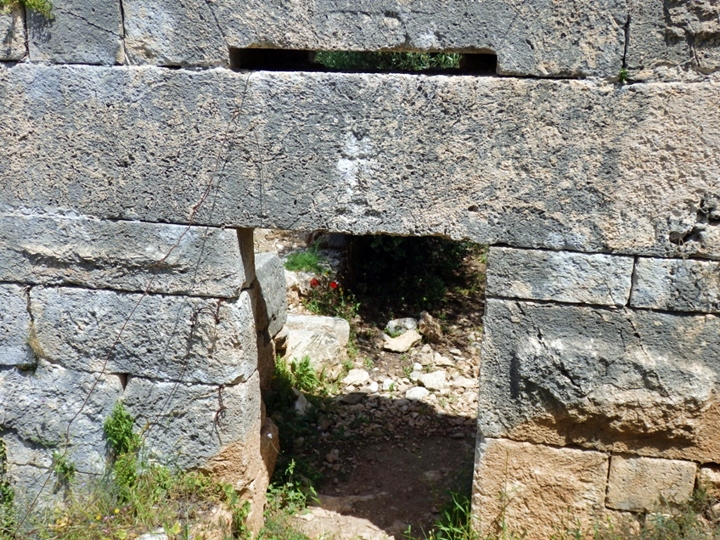 The eastern wall, and a section of its tower, is seen in the following photo.  The watch tower monitored the area and the road along Nahal Shiloh.

The apse of the Byzantine church is located on the hidden right side, facing the eastern wall. A staircase leads up to the tower. 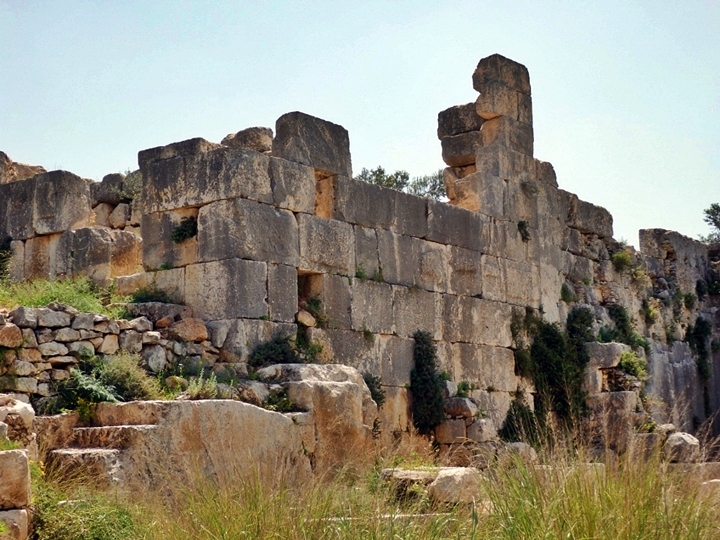 An inner  section of the western wall, facing north, is seen in the next photo. This may have been the dining room, as the PEF report wrote about it:  "The principal remains are those of the church, and of a great hall (apparently the refectory) south of it". 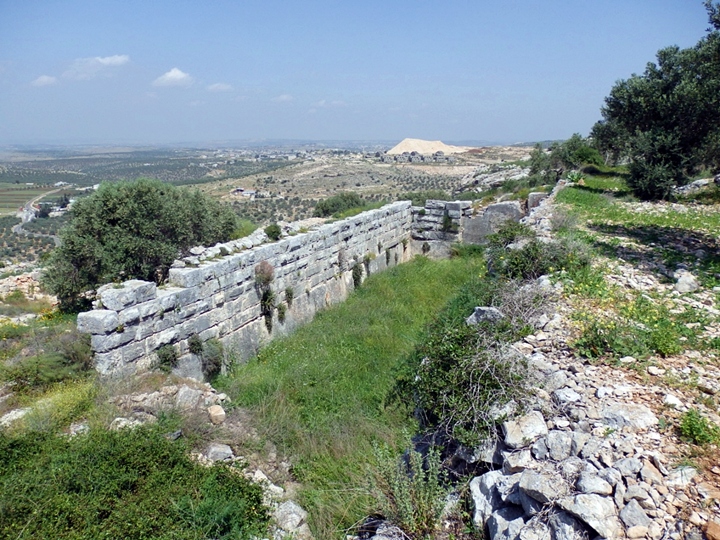 Another section of the western wall, with wild poppy flowers, is below: 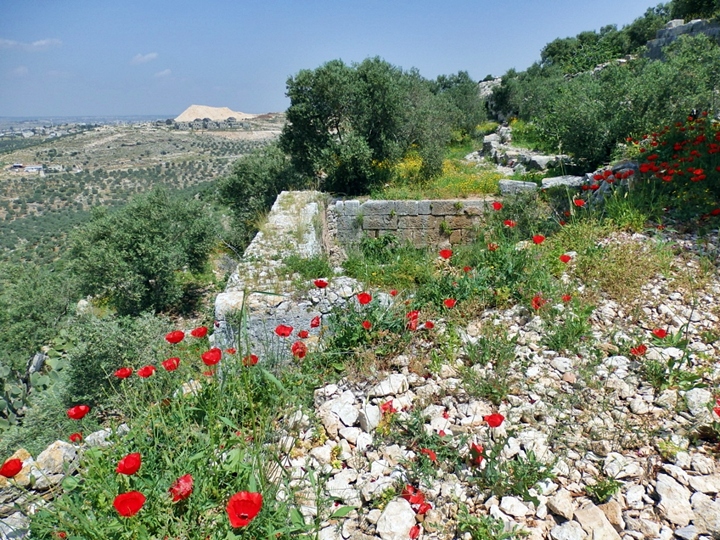 The site contained two cisterns, a large one on the east and a smaller one on the south west.

An oil press installation is located in the monastery. It was initially built as a wine press, then converted for producing oil. 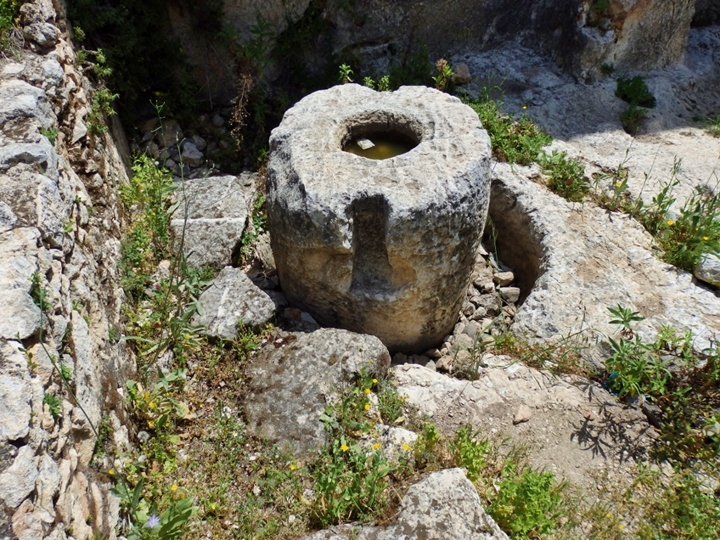 Other installations found in the courtyard: 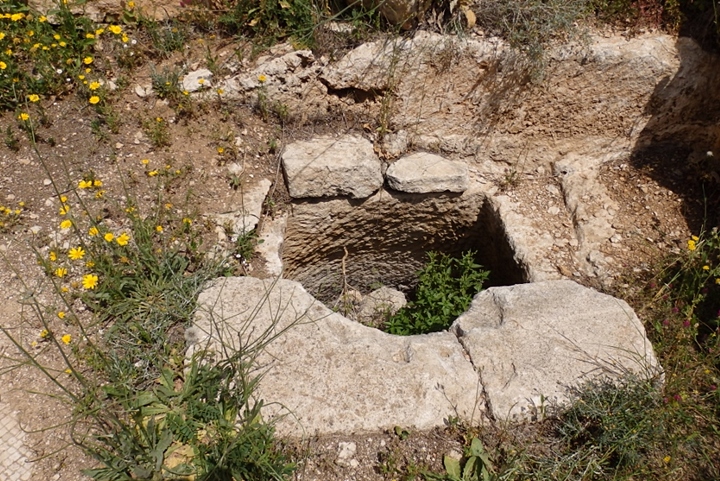 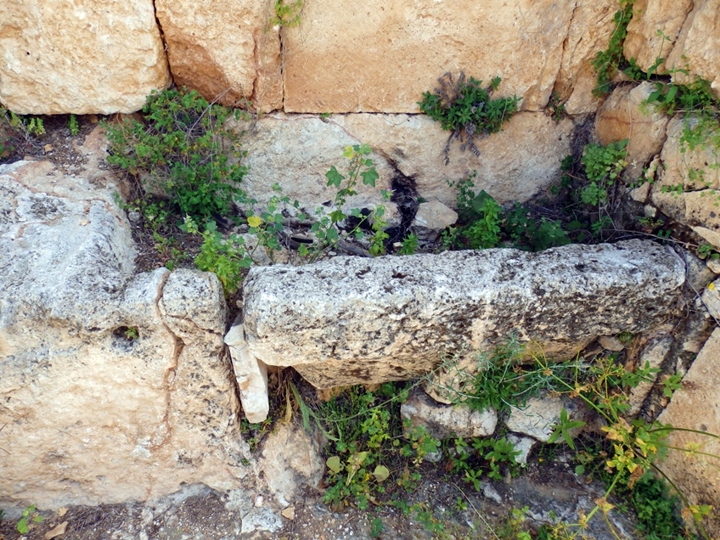 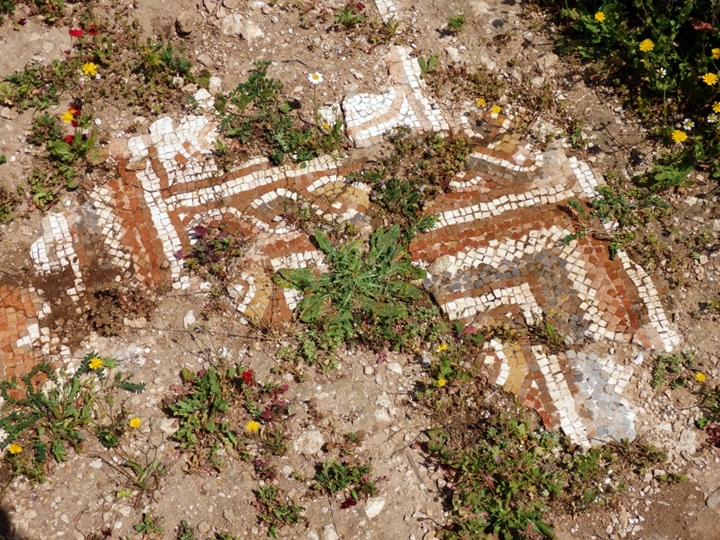 The church was decorated with rich mosaic floors. Some of the floors were transferred to the archaeological museum in the Good Samaritan Inn, where they are on display. One of the most beautiful sections, from the northern side of the apse, are standing in the entrance to the museum.

The decoration with geometric patterns, without figurative objects, is common in the mosaic floors of early churches. The figurative decorations , such as floral,  animal and village/hunting scenes, started only in the late 6th C. 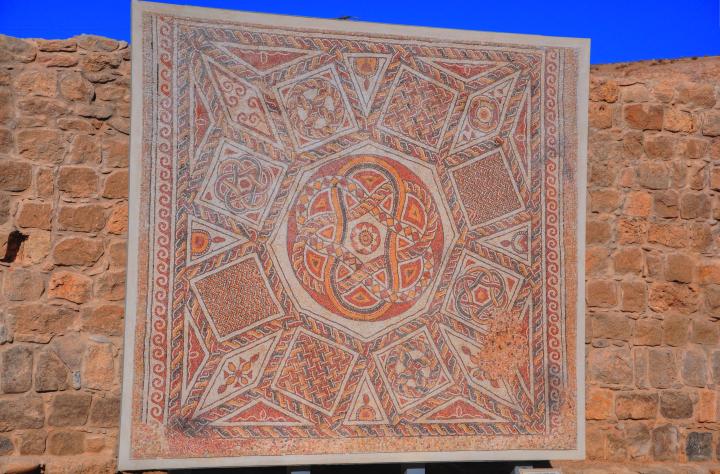 Another section of the floor, from the Church's narthex (entrance) on the western side, is seen below: 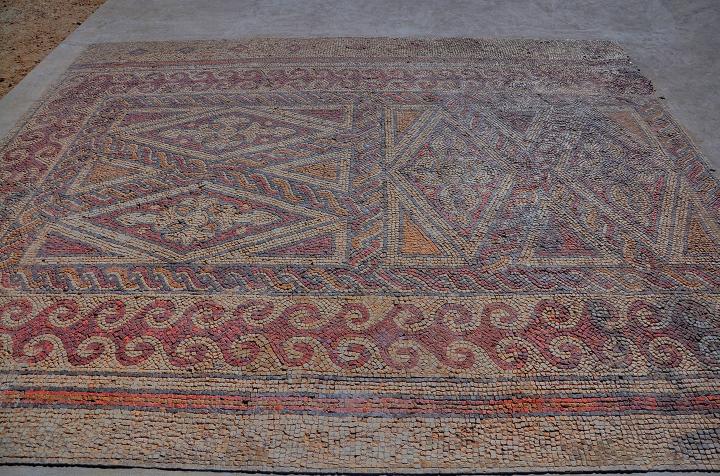 The floor from the northern Chapel is shown in the next photo.   Here are some figurative objects such as grapes, as started in the late 6th Century. 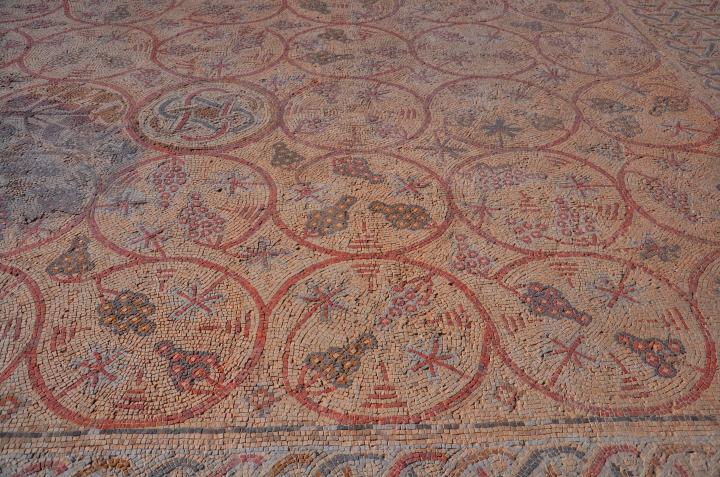