For a general description of Dan - see the overview page.

The following focuses on the Israelite Kingdom period, starting from the 10th century BC. For a full history - check the overview page.

The Israelites conquered and possessed the Canaanite city in the 12th century BC. The Bible writes about this (Joshua 19 47): "...the children of Dan went up to fight against Leshem, and took it, and smote it with the edge of the sword, and possessed it, and dwelt therein, and called Leshem, Dan, after the name of Dan their father".

Evidence of a sparse  Israelite  presence was unearthed in the "settlement" pits on top of the city.

The next phase  of settlement was a construction of new structures in the city. The expansion of the city happened during the beginning of the 10th century BC when the Northern Israelite Kingdom separated from the Kingdom of Judah. Jeroboam, son of Nebat, divided the Kingdom after King Solomon's death, and established in Dan  a substitute worship place for Jerusalem.  The Bible described these acts  (1 Kings 12 28-30): ..."Whereupon the king took counsel, and made two calves of gold... And he set the one in Bethel, and the other put he in Dan. And this thing became a sin: for the people went to worship before the one, even unto Dan. ". Dan, the northern city, became a pivot city for the new Israelite Kingdom.

During the 9th century BC the Israelite city was burnt, as testified by a layer of ash found during the excavations . This might have been the result of the intrusion of of Syria's Ben-Hadad (885BC) along the North Jordan valley (1 Kings 15 20): "So Benhadad hearkened unto king Asa, and sent the captains of the hosts which he had against the cities of Israel, and smote Ijon, and Dan, and Abelbethmaachah, and all Cinneroth, with all the land of Naphtali". This destruction was also recorded in the excavations of Hazor as well as other sites in the area. 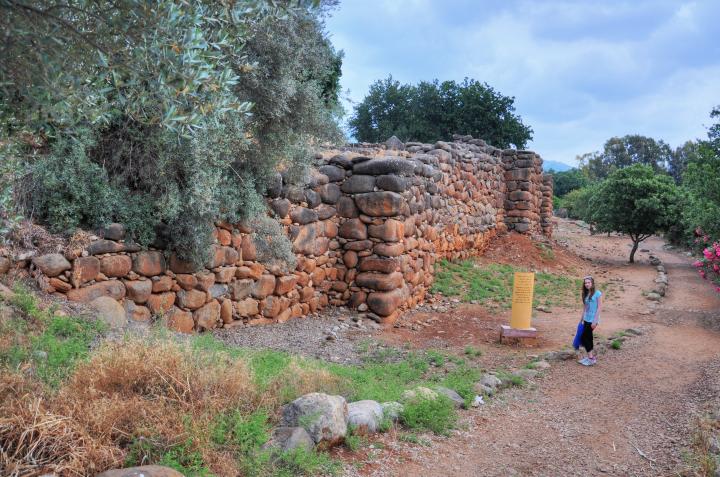 These walls were composed of large un-hewn basalt stones, supported with smaller stones .  Amit, Webmaster Rotem's sister, stands below one of the towers along the wall. 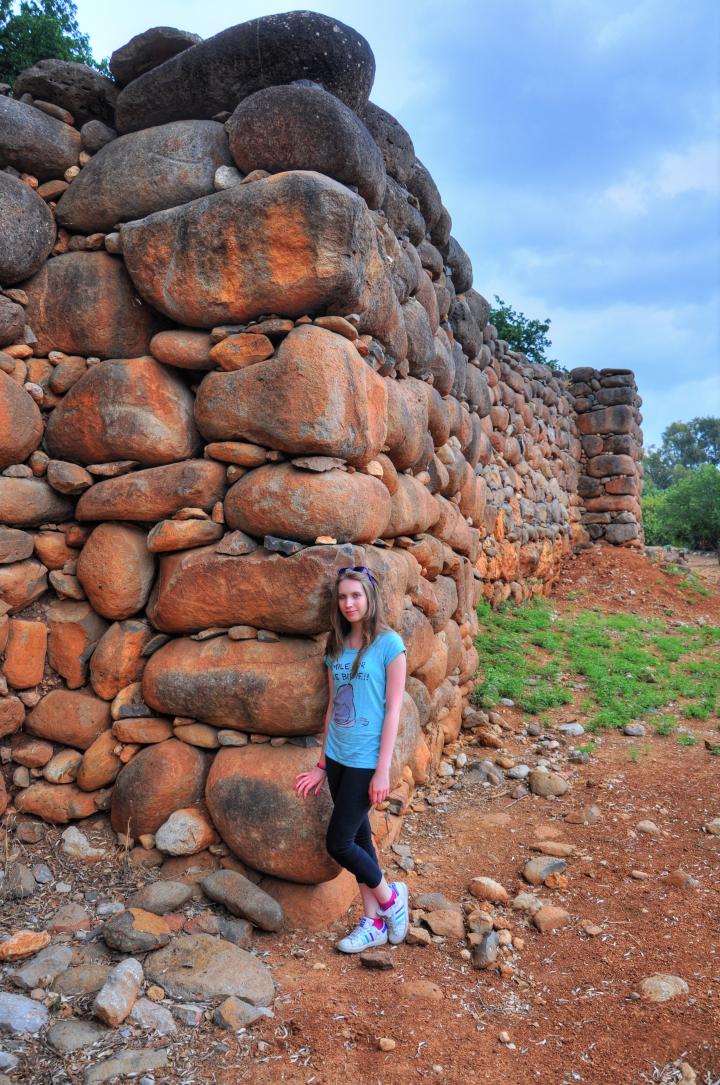 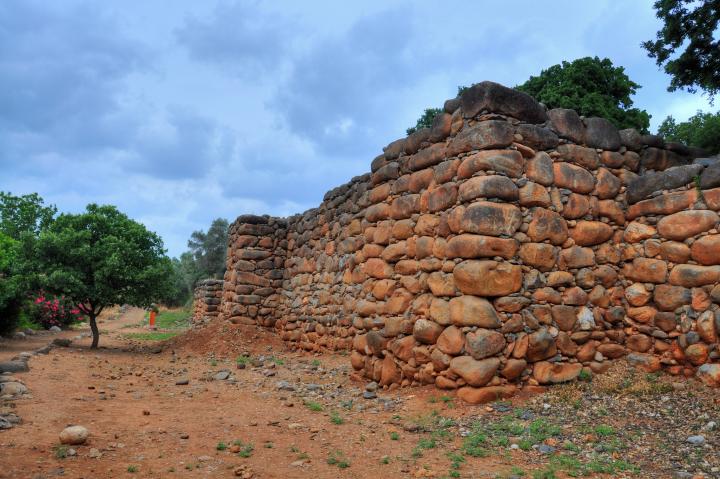 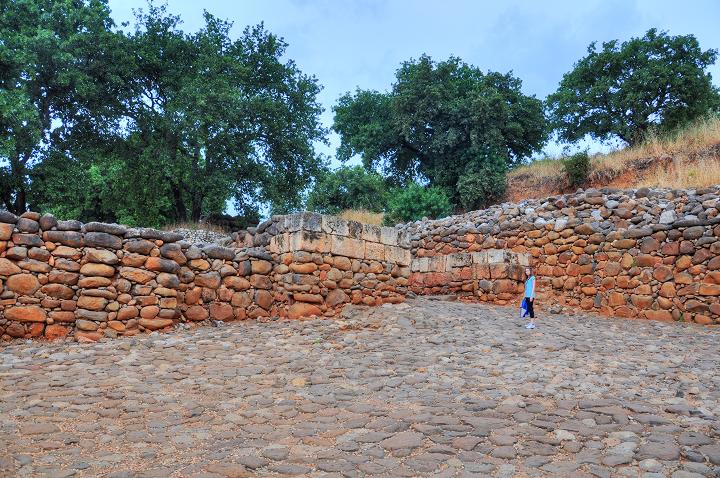 The main gate was composed of three pairs of beams surrounding a paved road that enters the city. This design created four guard rooms which is typical of Iron age gates (for example, BethSaida/Zer). The total area of the four-chamber gate covers 500 square meters.  There are two gates in this complex - an outer and an inner gate. 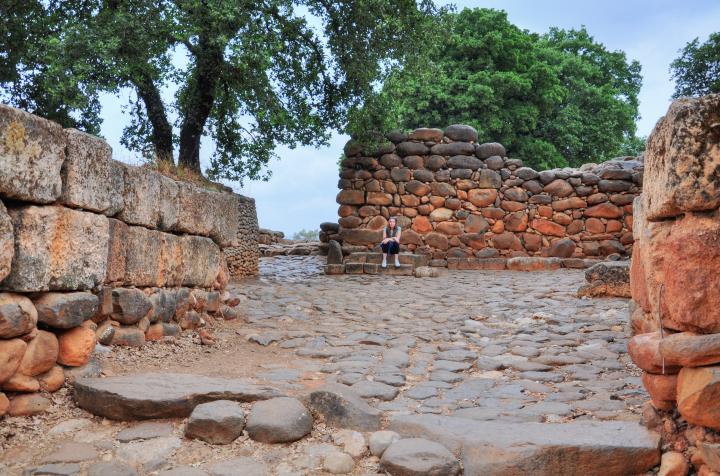 Opposite the gate's opening is a base of a canopy, which is based on the flower-shaped stones with top grooves that held the poles. A raised platform is located in the center.  The standing stone on the left  of the platform may have served as a divine icon during the ceremonies held in front of the place. 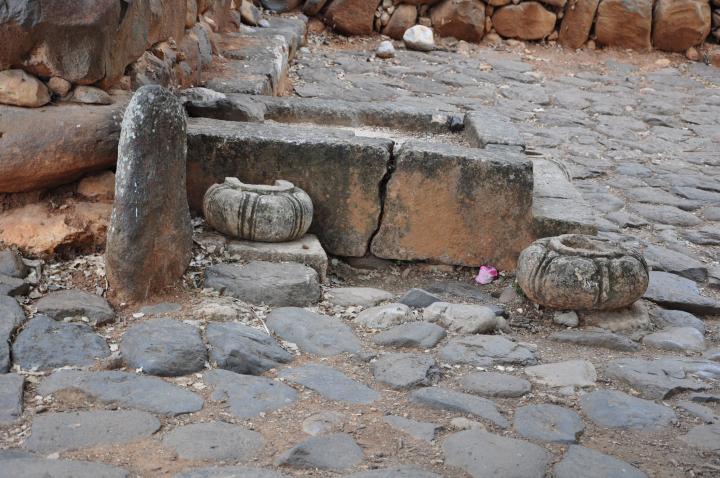 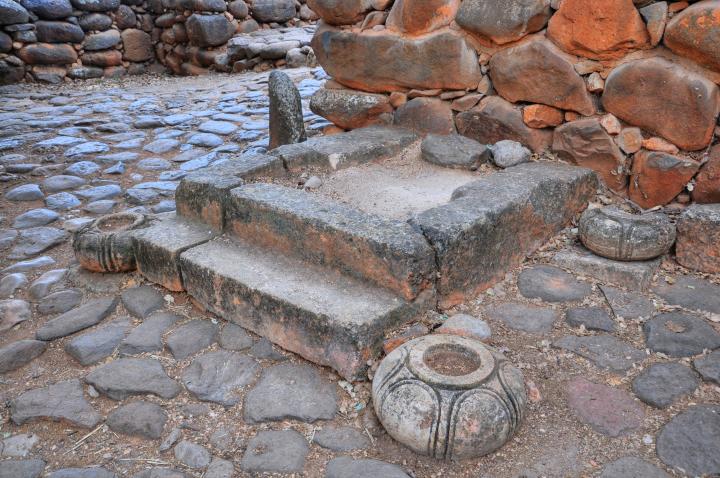 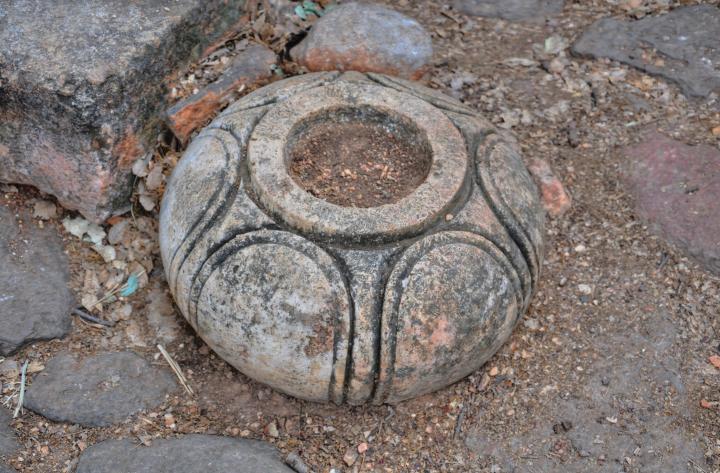 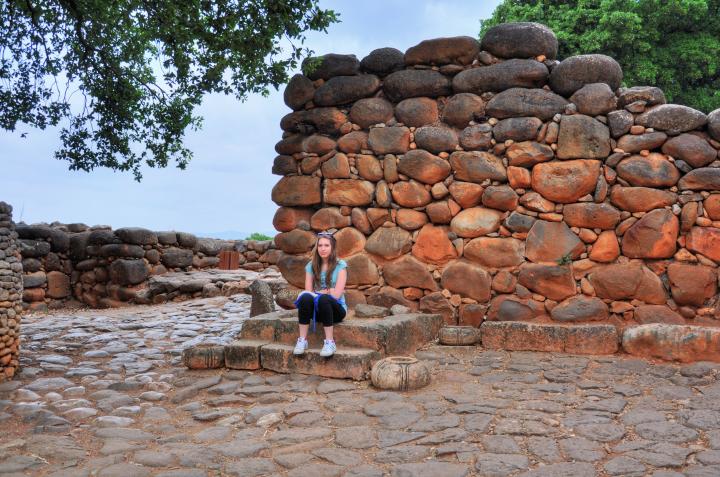 The following picture shows a view from the top of the east side of the gate, looking down to the area outside the gate. In this area, the excavators found fragments of a basalt stone with  Aramaic inscription, dated to the 9th century BC. This unique stele includes to a reference to the "House of David", and parallels to the Biblical description (2 Kings 9) of the murders of Kings Joram and Ahaziah. 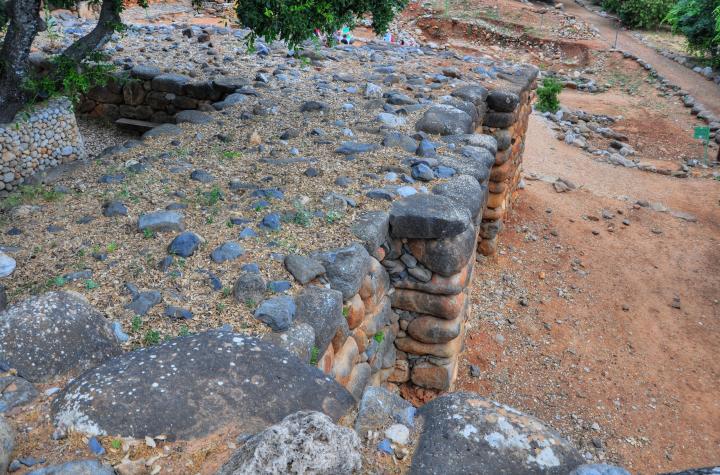 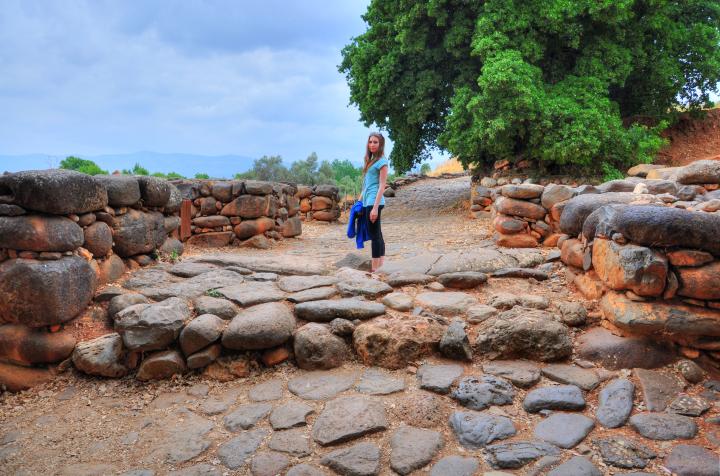 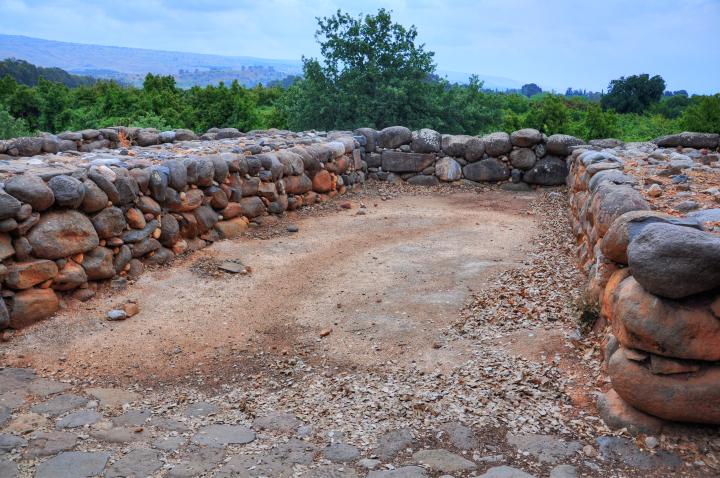 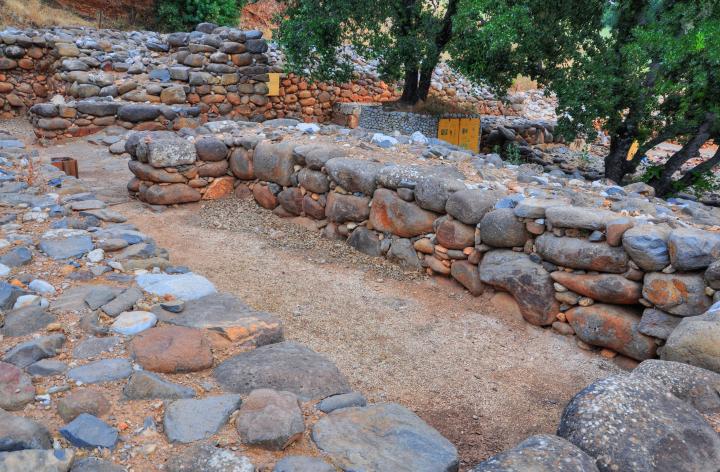 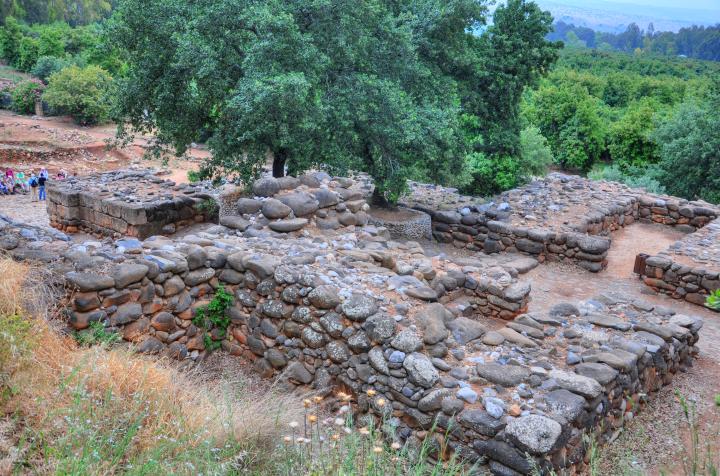 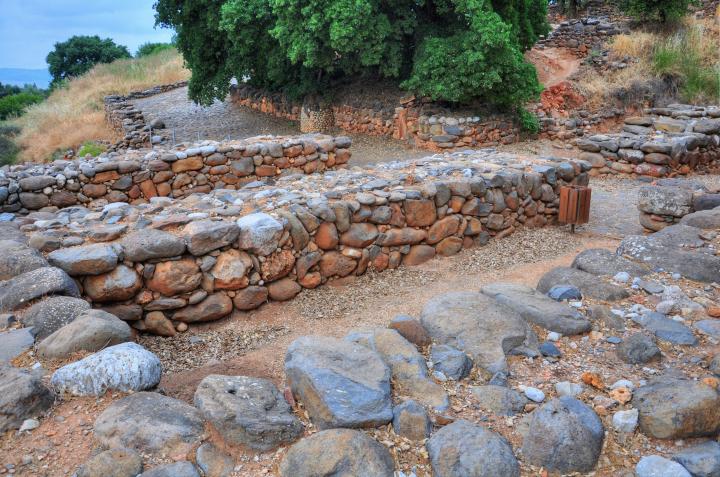 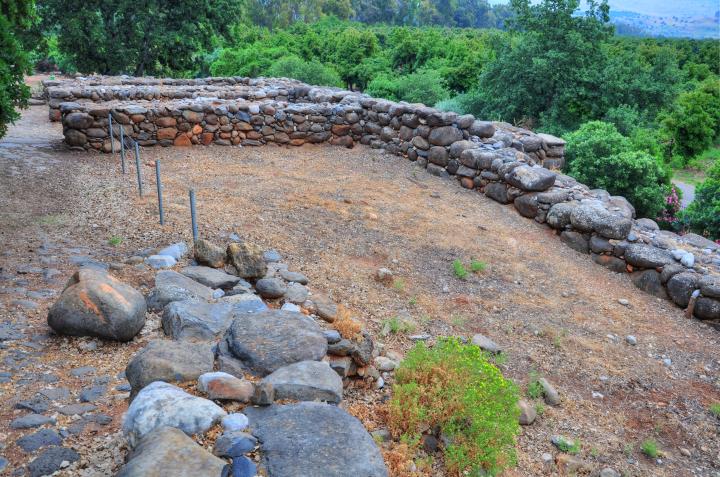 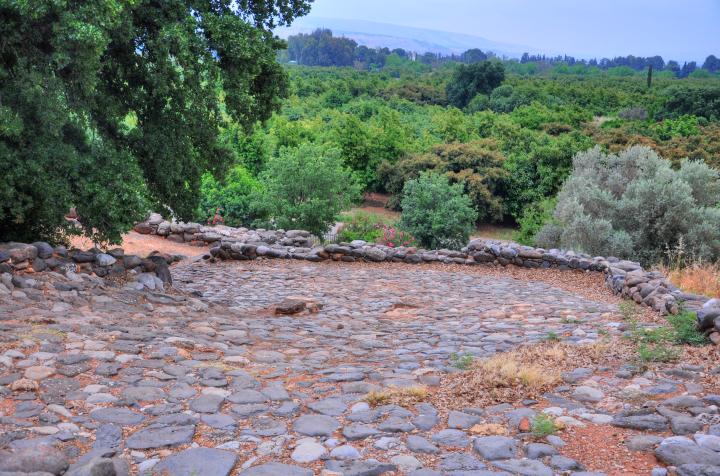 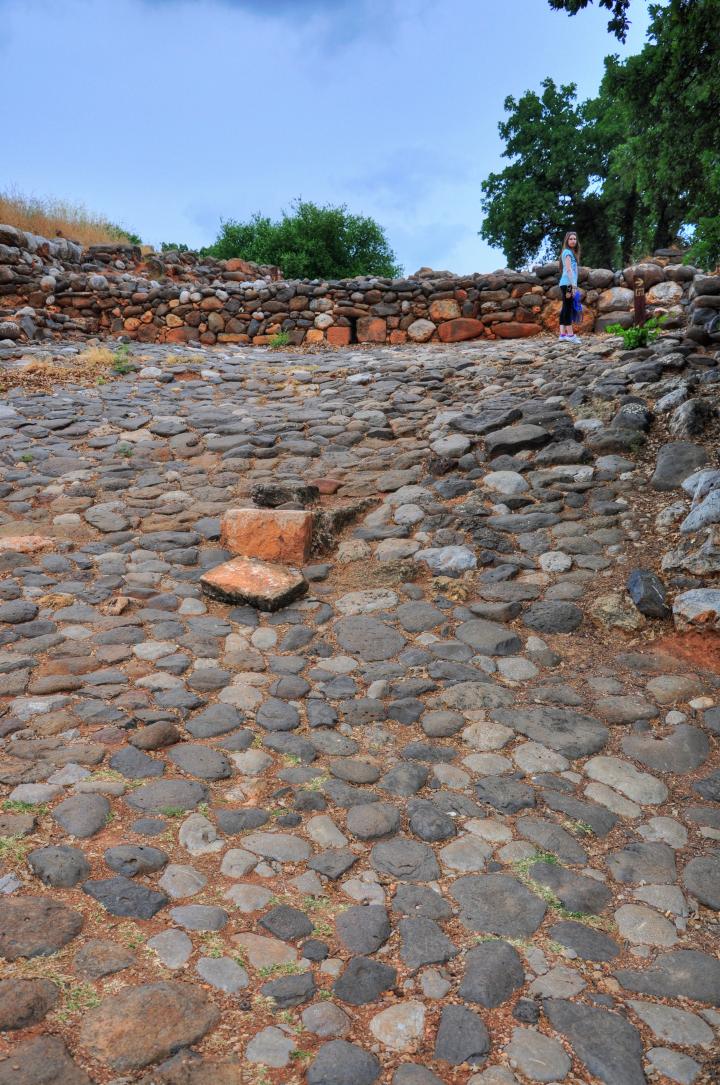 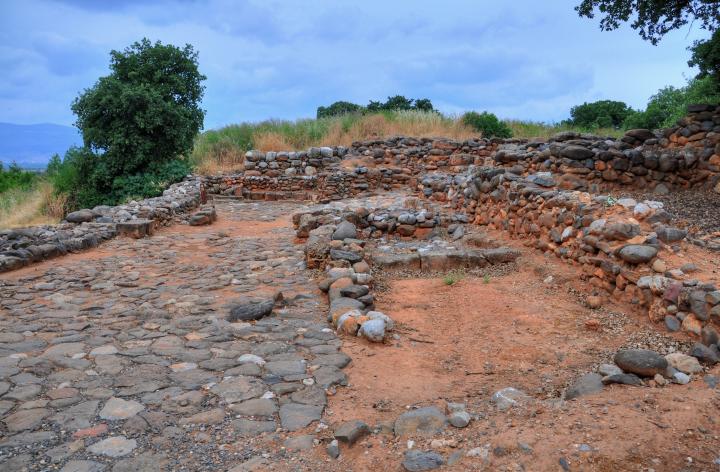 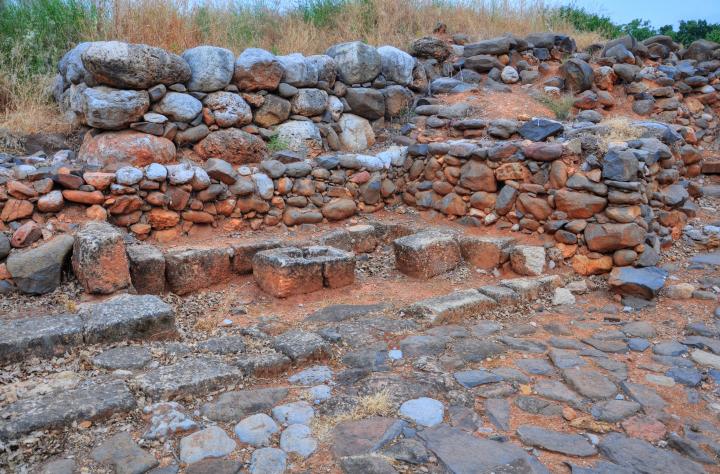 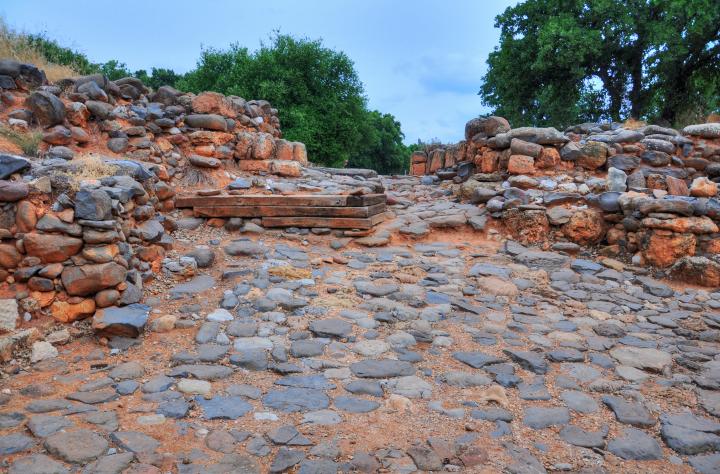 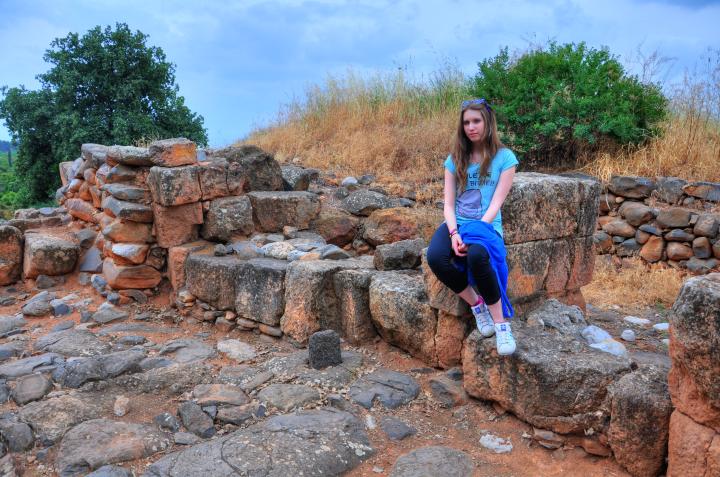 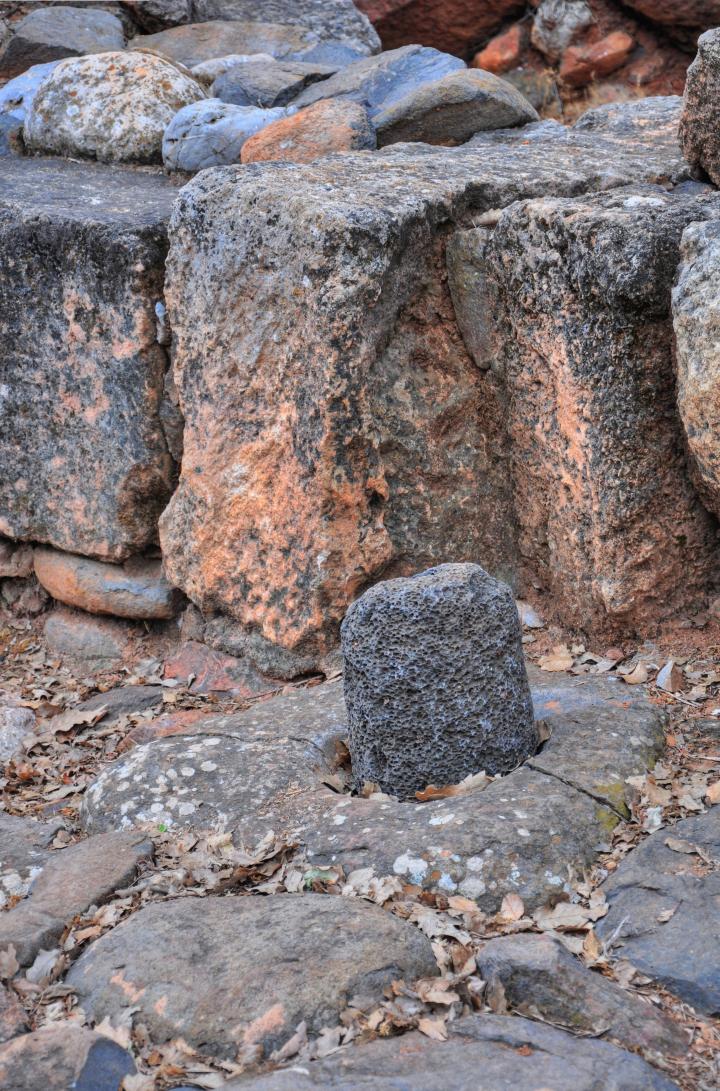 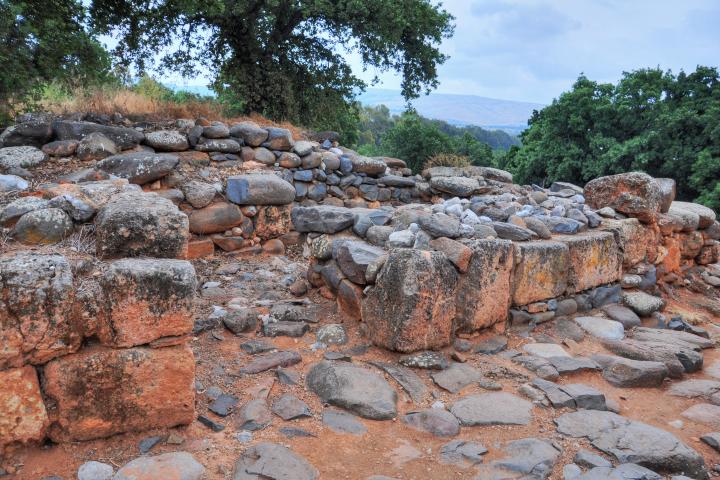 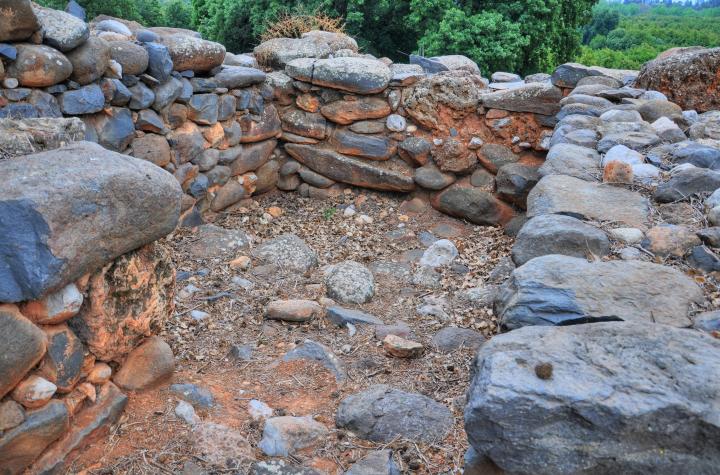 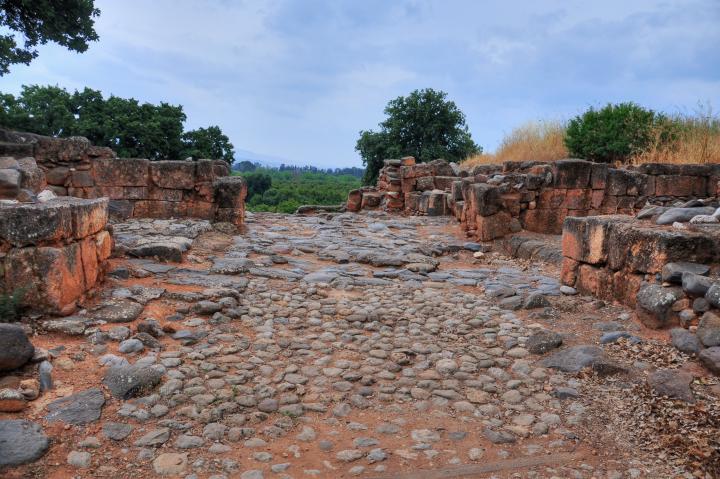 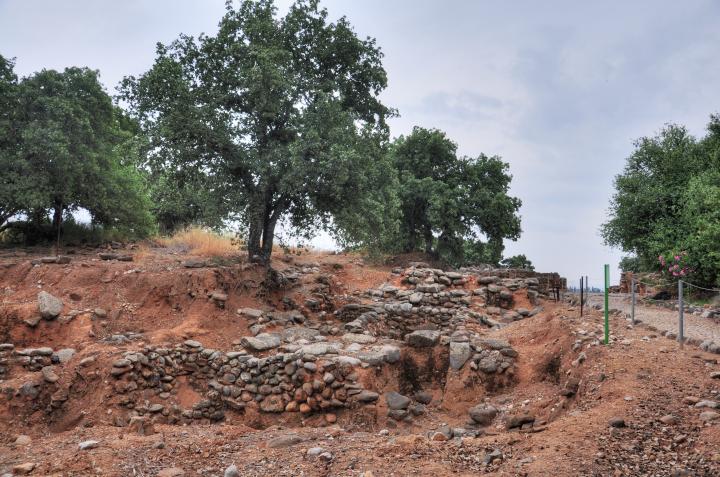 Another view of the trenches  is below. A layer of ash was detected, dated to the 9th century BC. This may have been a result of the destruction  by  the intrusion of Syria's Ben-Hadad (885BC) along the North Jordan valley (1 Kings 15 20): "So Benhadad hearkened unto king Asa, and sent the captains of the hosts which he had against the cities of Israel, and smote Ijon, and Dan, and Abelbethmaachah, and all Cinneroth, with all the land of Naphtali". 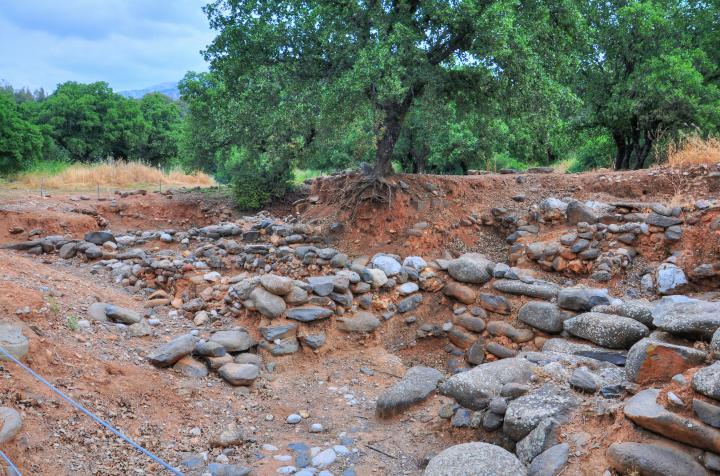 One of the flowers on top of the hill blooms in the spring time, and is called "Red Everlasting" (Scientific name  - Helichrysum sanguineum, and in Hebrew: Dam Hamacabim - "the blood of the Maccabees").  According to the legend, the flower commemorates a place where the blood of the 2nd century BC Israelite freedom-fighter has been spilled. Indeed, an appropriate place to flower - a city which the Israelite warriors attempted to block the evil forces from the north. 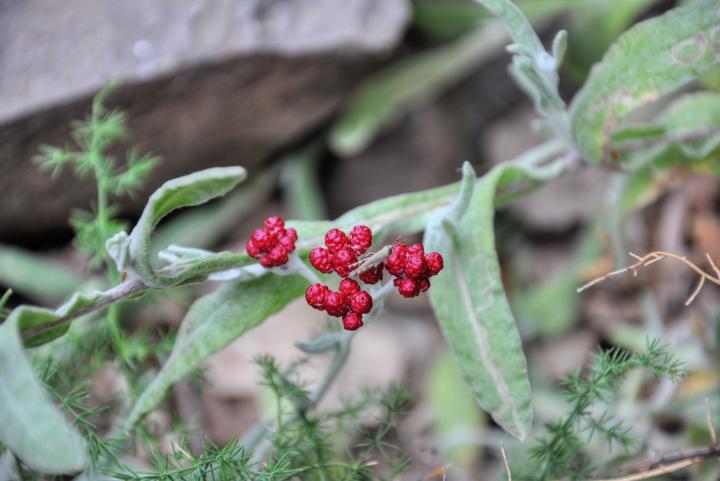 BibleWalks.com - Have Bible - Will Travel!