The Roman engineers perfected the art of road building, and enabled them to effectively manage the vast empire by improving the links between the cities. They were the greatest road builders of the ancient world, which may be one of the factors the Romans sustained their empire for hundreds of years. At the peak of the empire there were over 85,000 KM of roads which served military and commercial traffic, which was unprecedented in the ancient times.

The default width of the road was 8ft (2.4M). Milestones were placed every about 1.5KM, and were usually circular columns (50cm diameter), 1.5M high and standing over a rectangular base.

The Romans also established well planned cities and based them on a matrix of high quality paved streets. Some of the streets were colonnaded with shops or houses on both sides. These are covered by a separate web page.

The Romans conquered the Holy Land in 63BC and ruled for over 700 years. Among their major effect on the land and its history was the quality of the roads.

During the great revolt (66-74 AD) the Romans constructed new roads to make their long supply lines more efficient. Their mobilization of the army required better roads than were constructed previously. Josephus Flavius, the commander of the Galilee revolt which later wrote about these tragic events, describes one of such constructions (“Wars of the Jews”, book III chapter 7 par. 3): “Accordingly, he sent both foot-men and horsemen to level the road, which was mountainous and rocky, not without difficulty to be traveled over by footmen, but absolutely impracticable for horsemen. Now these workmen accomplished what they were about in four days’ time, and opened a broad way for the army”.

The Peutinger Map (Tabula Peutingeriana) is a medieval map which was based on a 4th C Roman military road map. It is named after Conrad Peutinger, who found it in a monastery and published it in 1507. The map was made in the 13th C, and copied from an older map. It is drawn as a long scroll (6.82M x 34 cm), arranged in the direction of England on the left side and India on the right side. The map shows the major roads, with indication of the cities, and geographic highlights (lakes, rivers, mountains, seas). Along the links are stations and distance in Roman miles (about 1.5KM per mile).

In the section shown below is the area of the Holy Land, drawn in a rotated direction (Egypt on the left, the Mediterranean sea on the top, and Syria on the right). The major cities are (from left to right): Jerusalem listed as “Helya Capitolina formely Herusalem” (drawn as a double house, with Mount of Olives as “Mons Oliveti”), Jaffa as Joppe, Caesarea Maritama as Cesaria, Dor as Thora, Beit Shean as Scytopoli, Acre as Ptolomaide, Tyre as Tyro, Sidon as Sydone, Tiberias as Tyberias (including the Sea of Galilee as La(cus) tyberias). The roads are shown as brown lines between the cities and stations.

Sites with Roman Roads (between cities):

Roman roads and streets are found in many of the Holy Land sites. The following section lists the sites of Roman roads that are featured in BibleWalks. Click on the site’s name to see more information on each site. 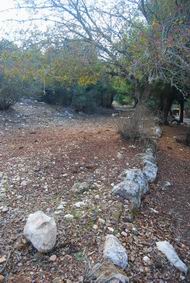 A Roman road from Tyre, through Banias, up to the Golan heights. It passes on the northern foothills of Tell Dan. This east-west road was used by the French & British to mark the borders between Lebanon, Syria and Israel. A Roman bridge is located nearby.

Under the modern road connecting to the Golan, is the base of a Roman bridge. This was once a section of the ancient Roman road that led via Tell Dan to Damascus.

Two Roman milestones were found near Shavey Zion, and marked the 4th and 5th miles from Acre to Tyre (#309 and #310 of the Roman Acre-Syrian road that was built by Claudius in 56AD). 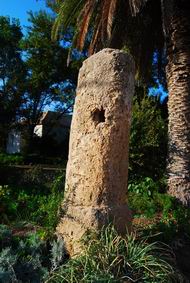 The Roman road from Emmaus passed through a narrow mountain passage named Nahal Ilan (Wadi A’lakah), and started here its ascent to to the Holy City of Jerusalem.

A collection of milestones is located on the side of the Roman road. 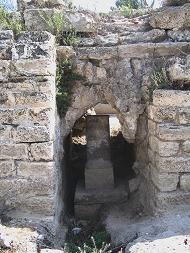 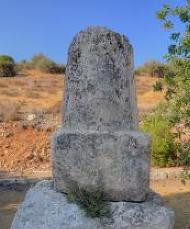 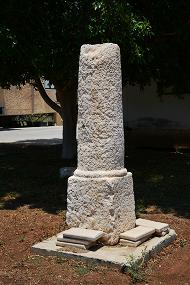 New excavations in 2016 unearthed a section of the Roman road leading to Beit Nettif, near Beit Shemesh. It may have been a section of the Caesar’s way from Ashkelon, via Beit-Guvrin, to Bethlehem and Jerusalem.