Ruins of two Byzantine churches in the desert city of Mamshit.

This page reviews the two Byzantine churches in Mamshit (Mampsis). They are probably the oldest churches in the Negev.

In short:     The Nabateans converted to Christianity during the Byzantine period (4th-7th century AD).  Two Churches and a monastery were built in Mamshit during the end of the 4th Century or the beginning of the 5th Century.

The city was severely damaged after the Persian invasion (614) or the Arab conquest (636) or following a massive earthquake in the 7th century.

History – Christianity in the Negev:

Negev became a center of pilgrimage and monasticism, starting from a major center in Gaza and then spreading around the Negev desert cities, Jerusalem and the Judean desert.

Churches were constructed in Elusa (as referred in the stories of Theodolus and Hilarion below), two in Mamshit (described in this page), two in Avdat, two in Shivta, six or seven in Nessana (Nitzana), and other towns across the region.

The following figures and events in the Negev indicate that Christianity started to spread among the Nabatean cities across the Negev as early as the second half of the 4th century AD.

Hilarion is one of the important early monks in the Holy Land, and the founder of the Christian Monasticism in the Negev. His biography was edited in 390AD by St. Jerome  (Eusebius Hieronymus, 347-420), who recorded the chronicles of the founding Christian leaders.

Hilarion was born south of Gaza, son of a pagan family. At the age of 15 he became a Christian, and joined  Antonius the Great in Egypt – where he stayed for 2 months (306). Hilarion then returns to Gaza, and establishes a Laura (328) in the desert between between Gaza and Maiouma. Hilarion operated in the whole region around Gaza, and his center  evolved to become  a large religious center in Gaza (4th to 7th century) with notable followers (Zenon, Petrus or Peter the Iberian, Abba Isaiah).

Nilus (Nilos) was a high ranking  official in Constantinople. In 404 AD he left his wife and second son and joined the monks in Mt. Sinai together with his son, Theodolus.  While touring the desert, Bedouin tribesmen kidnapped the son, who was then sold as a slave,  and finally purchased by a Christian priest from Elusa. Nilus settled in Sinai and compiled several writings. He died in 430 AD.

The Western Church was built by Nilus, as described in three inscriptions on its mosaic floor. Is this the same Nilus? Has Nilus resided in the adjoining house? There are several theories on these issues.

A drone view from the north shows the location of the two churches in Mamshit. Both churches are located close to the south walls, on each end of the walled city. The south and higher side was selected for both churches, as the places of worship are usually built on the highest point in the city. 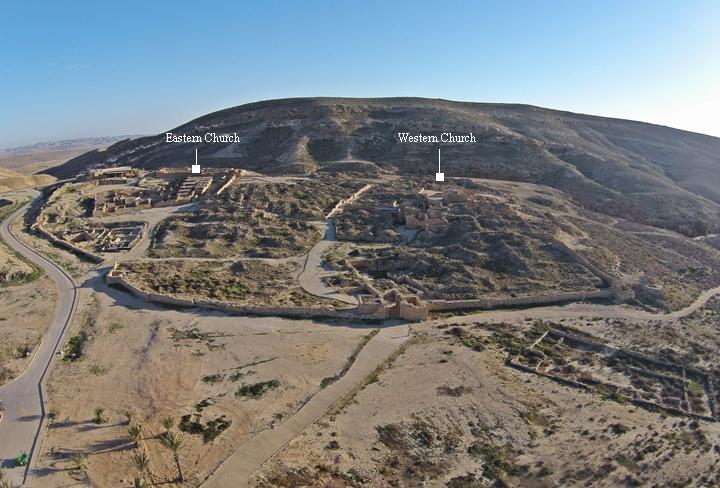 The Western church (a.k.a. “Nilus” Church) is located on the south-western corner of the city. Its location is indicated on the map as a red square. Note that the legend of the map is north-up, while the aerial view is south-up. 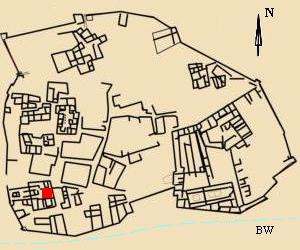 A view of the Western Church is seen below, as observed from the tower. The basilica-shaped church measures 10m by 17.5m, and was constructed in the end of the 4th Century AD. 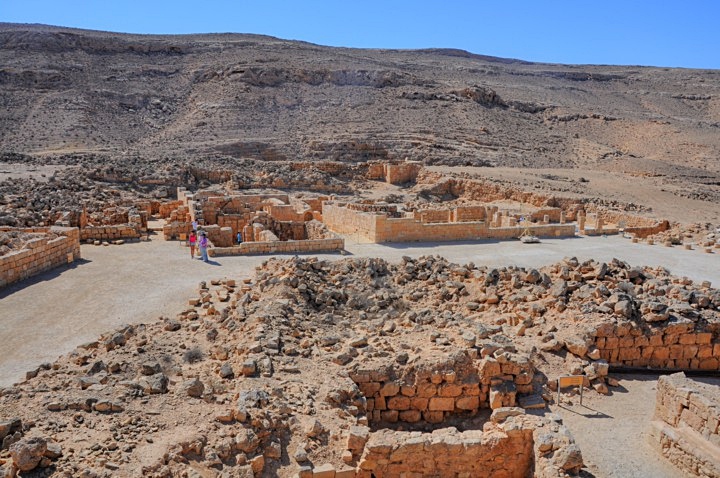 The northern wall of the church is in the next picture. The sign displays its other name: , the “Nilus Church”,  is named after Nilus (Nilos) who built the church. The entrance on the northwest wall, seen in the middle of the wall,  is the  entrance to the courtyard. 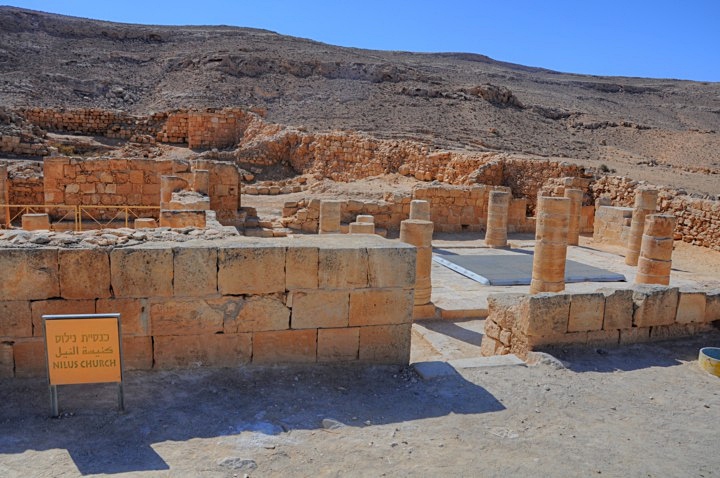 The colonnaded courtyard (atrium) is located on the western side of the church.  There are 10 columns on a raised platform, as seen in the photograph.  In the center of the atrium is a covered cistern.

Through the courtyard are three entrances to the nave and aisles. 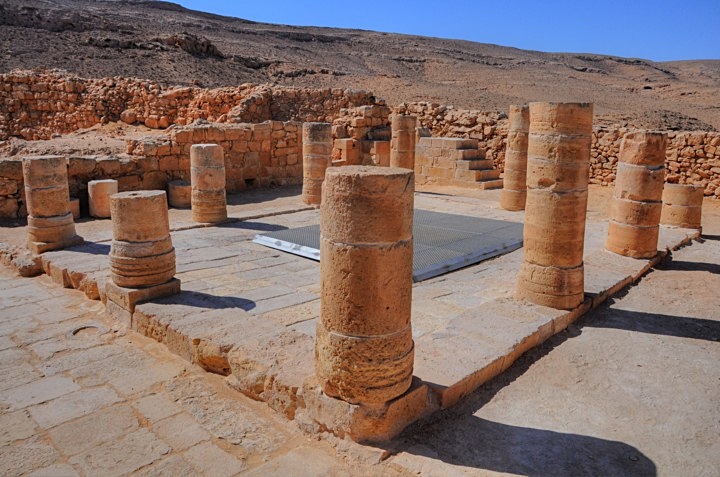 The mosaic floor of the church has colorful geometric patterns, birds, fruit, swastikas and five Greek inscriptions. It covers a total size of 85m2. 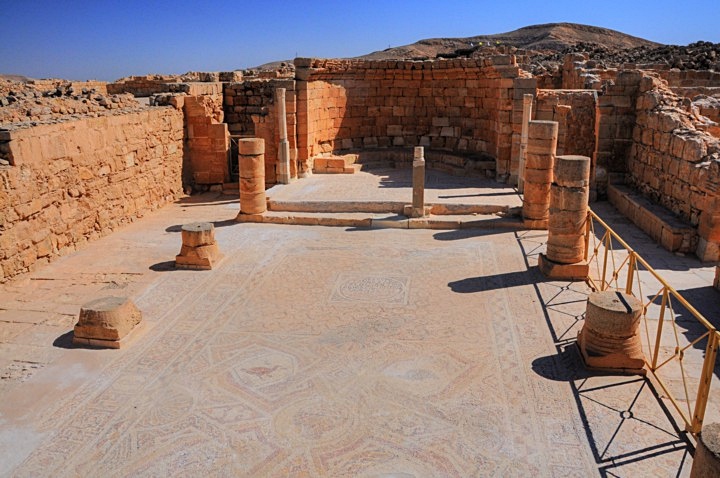 In the center of the nave’s mosaic floor is a Greek inscription, enclosed within a medallion. Its letters are:

ΝΟΙΚΟΝ ΑΥΤΟ<Υ>
This text was translated by the experts from the Greek translation forum:

“Lord, save your servant, Nilos, who loves Christ, who founded this church, and, Lord, protect his household.”

Two other inscriptions mention Nilos (near the altar and near the steps to the bema), as well as other wardens of the church. 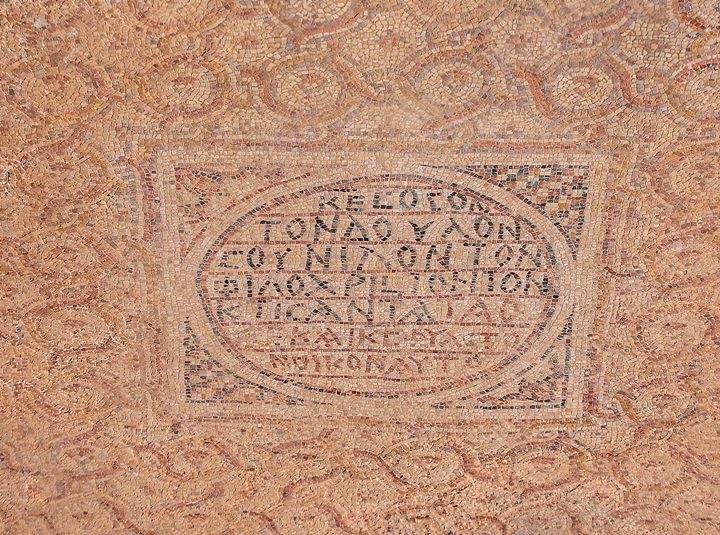 On the eastern side is the apse of the main altar. There are two rooms on each side of the apse in which rites were performed.

Notice the standing pillars of the chancel screen that separated the worshippers from the apse. 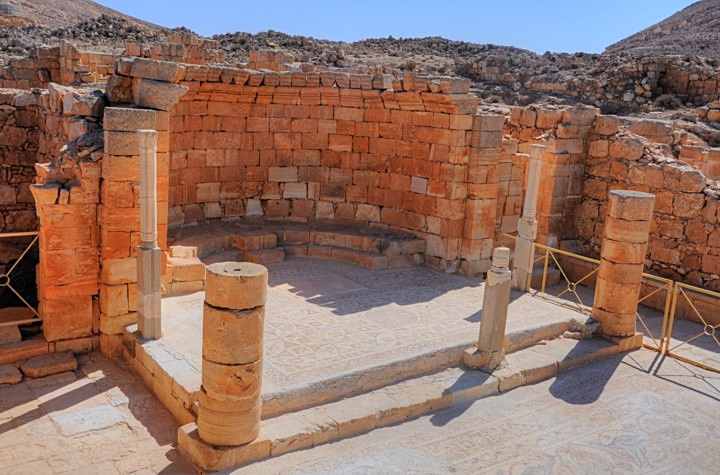 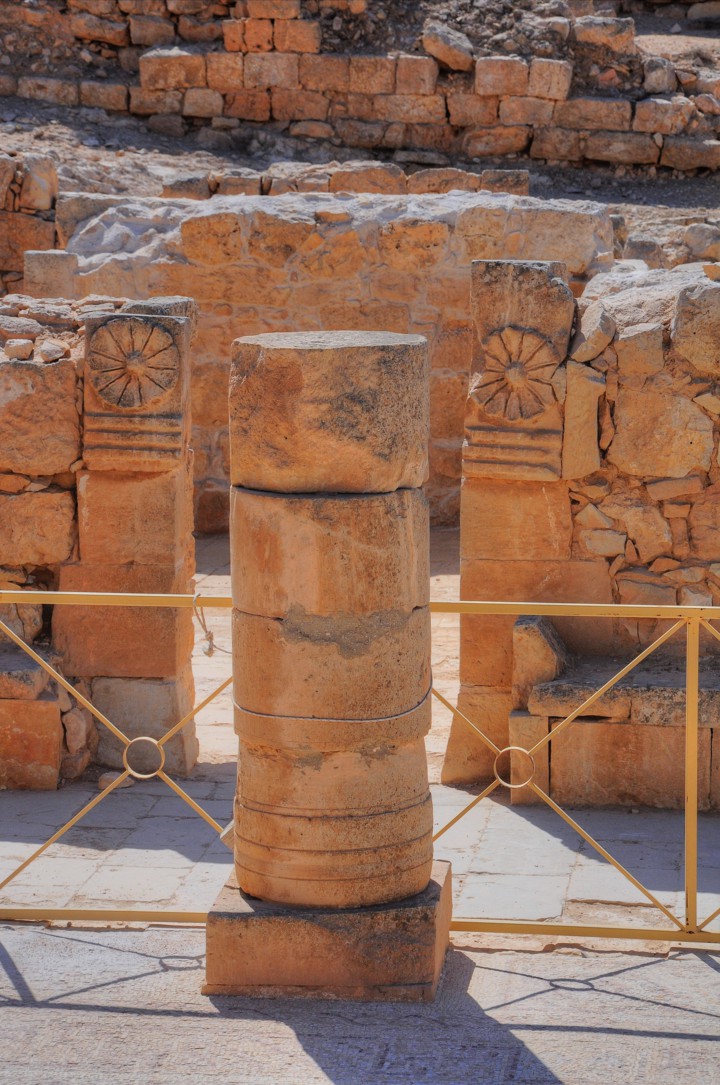 A view of the altar from top down is shown below. The floor is covered by mosaics, with geometric patterns and a Greek inscription. 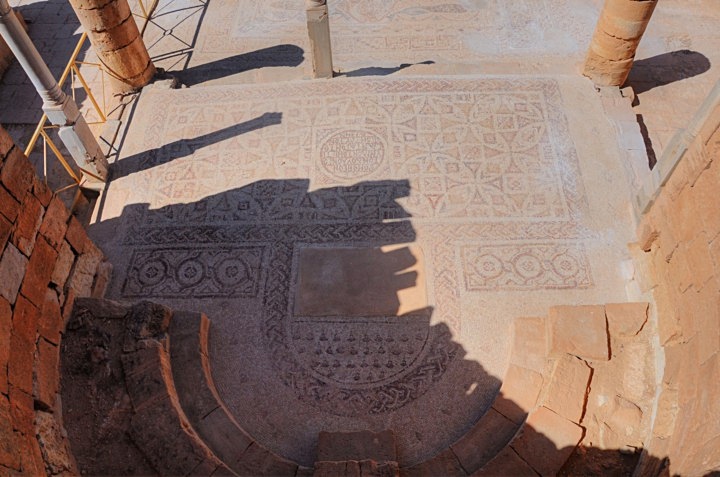 The inscription in front of the altar is seen below. It also mentions Nilus, the builder of the church. It reads in Greek:  “Lord, help your servant Nilos, builder of this church. Amen”.

Another inscription near the steps of the bema reads: “O Lord help Abba son of Zenobius, the paramonarios”. The Paramonarios is a supervisor cleric who was in charge of the church. 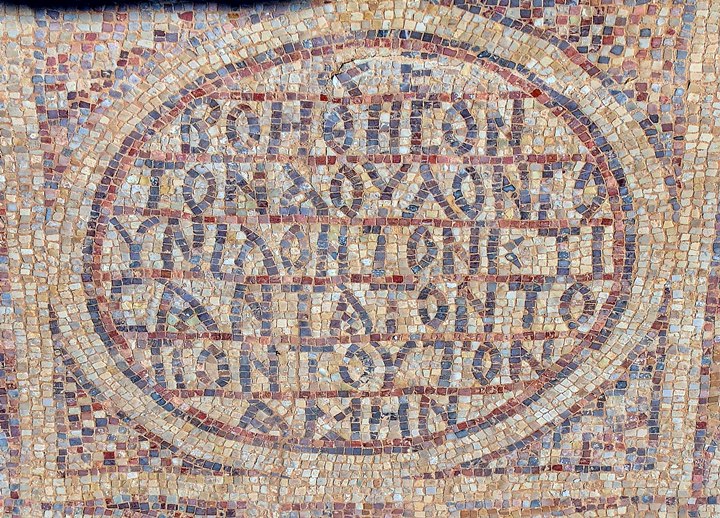 A close-up of an interesting geometric pattern: 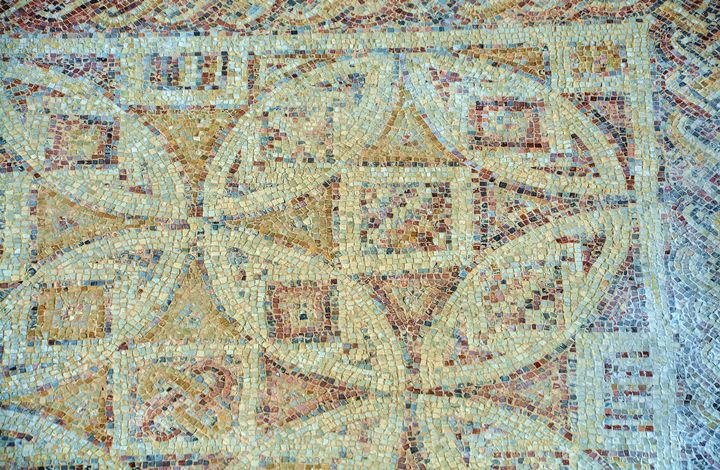 An amphora, from which grape vines emerge,  is flanked by a pair of peacocks: 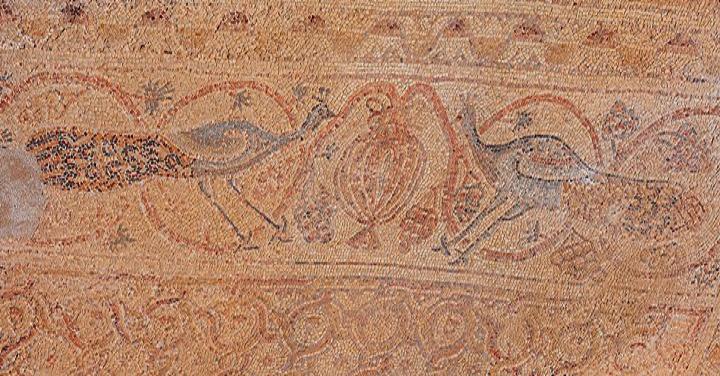 The left peacock is shown in a larger detail below: 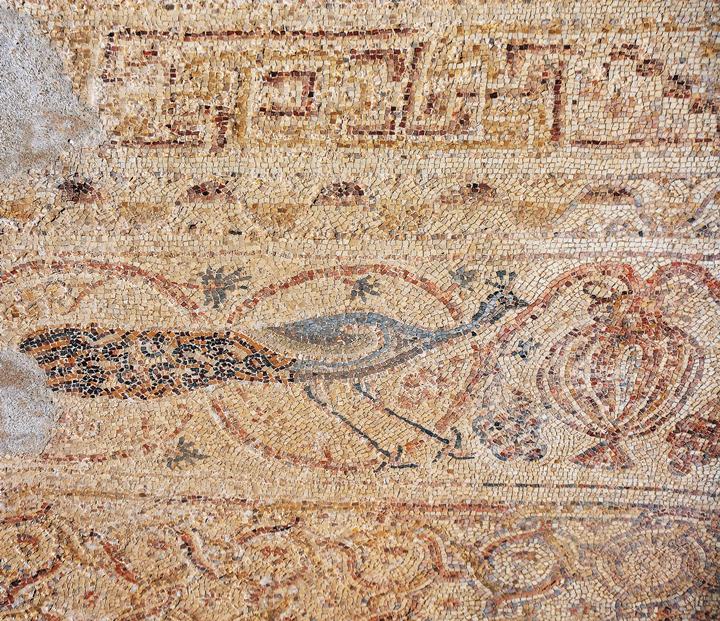 Another bird in another section of the floor: 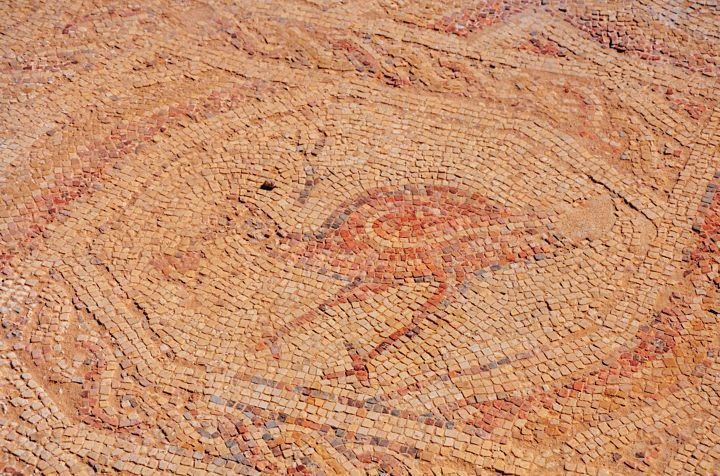 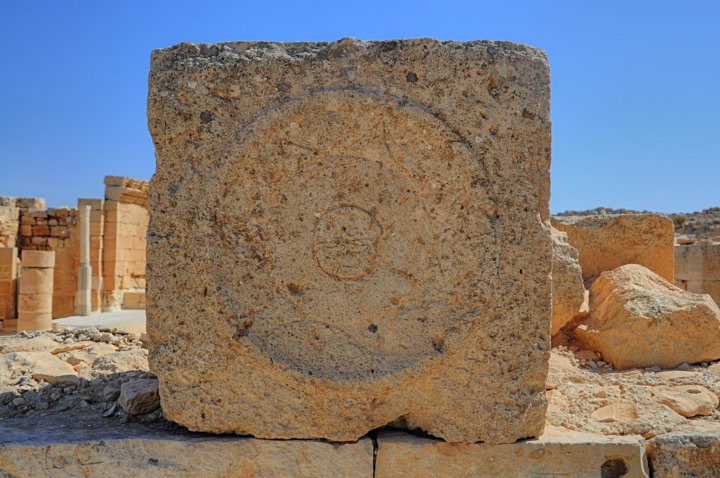 On the south-eastern side of the city is the “Church of the Martyrs”, a part of a Byzantine monastery. It is named after the martyrs who were buried in boxes in the rooms that flanked the apse. This church size (15 x 25.5m) is larger than the western church, but has a similar design.

The church, part of the Monastery complex, includes several rooms on its western side and a tower on its north-west side.

Its location is indicated on the map as a red square, which is the highest in the city. 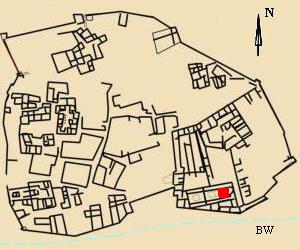 The entrance from the market area to the Church is through a flight of stairs and an entrance on the north side of the Atrium, as seen below. 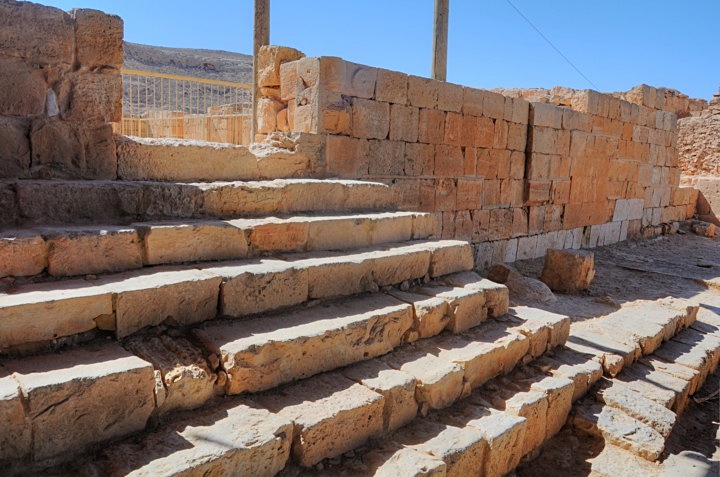 The nave of the church is shown in the following picture, and has a similar design as in the Western Church. Two sets of 7 columns  separate the nave and the aisles.  At the eastern side of the  church is a semicircular wall (apse), which marked the direction of the prayer. Three sets of benches for the clergy surround the altar.

Notice the mosaic with the cross in the foreground. In 427 AD the Church issued a decree prohibiting the placement of crosses in mosaic floors in order to prevent them from being stepped on, so this cross confirms the church dates to the period prior to the ban. 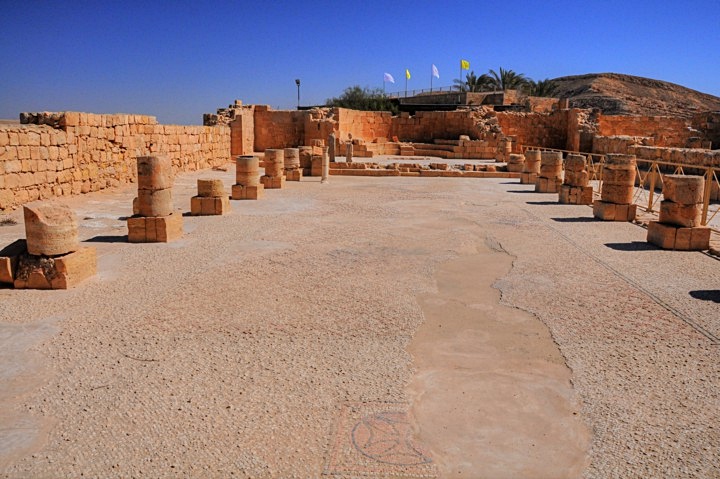 The southern Aisle is seen in the next picture, with benches along its southern wall. 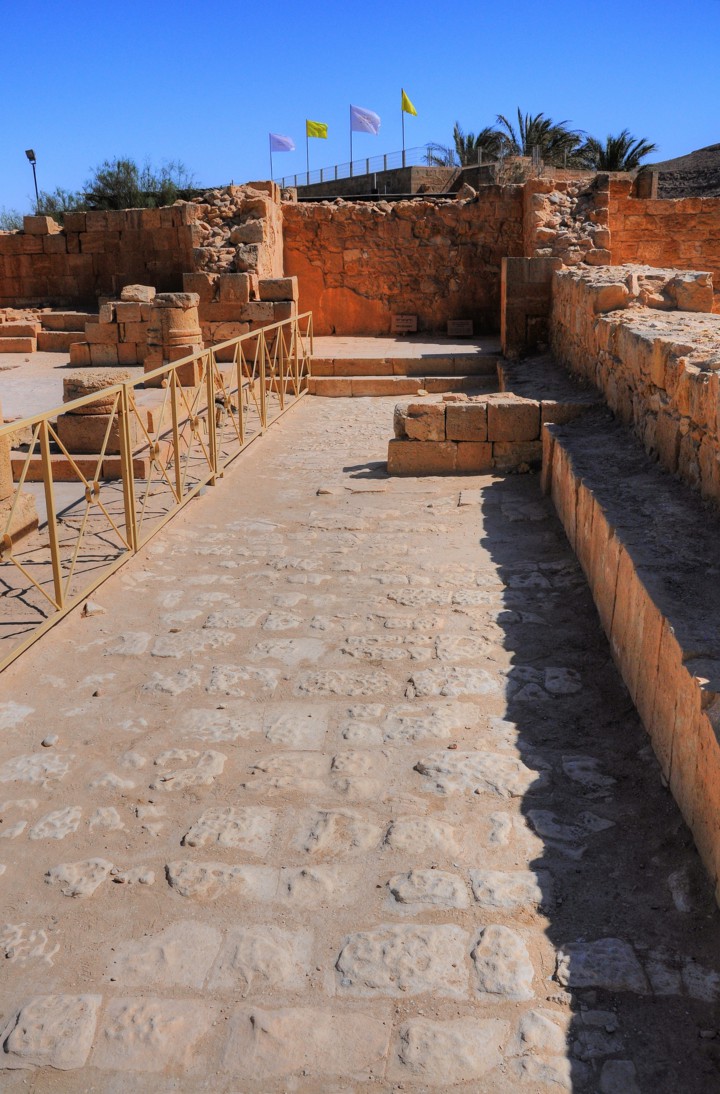 Another long hall is located on the southern side of the church. 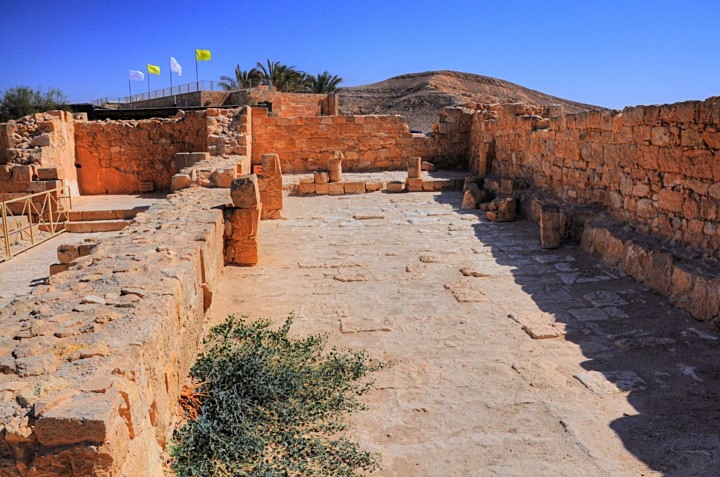 The northern aisle is shown below. 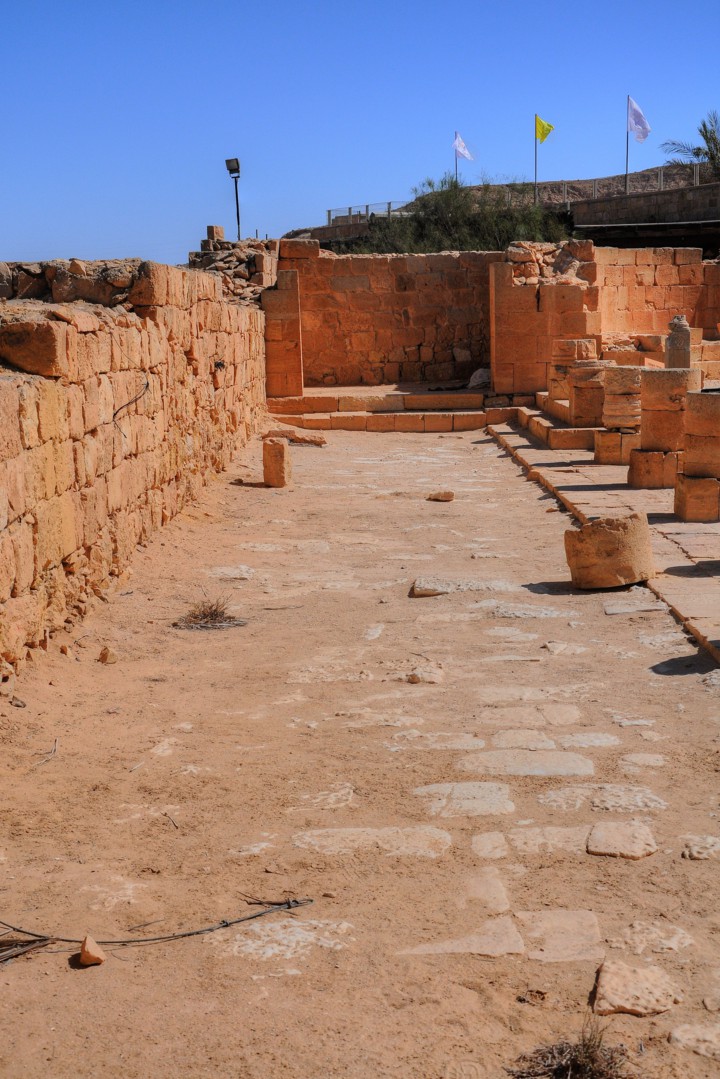 In the center of the courtyard is an underground cistern, with arches supporting its roof. 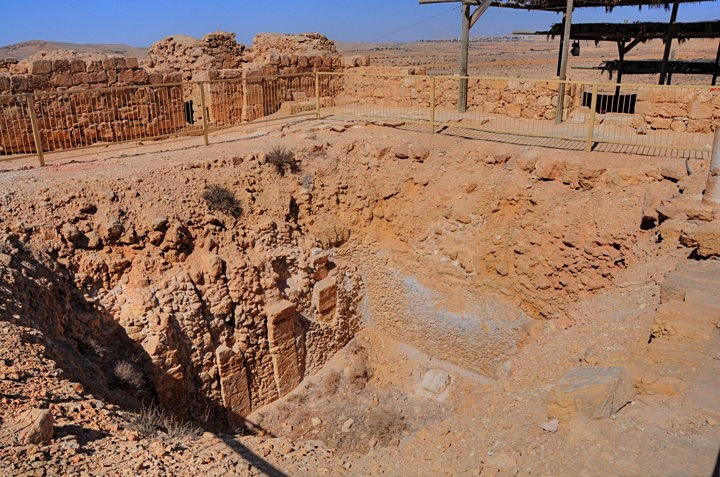 On the south side of the church is a large Byzantine baptistery.  In the  larger pool, which is in the shape of a cross (see photo below), adults were immersed in the water during the process of conversion to Christianity. On its right side is a smaller round pool for babies. 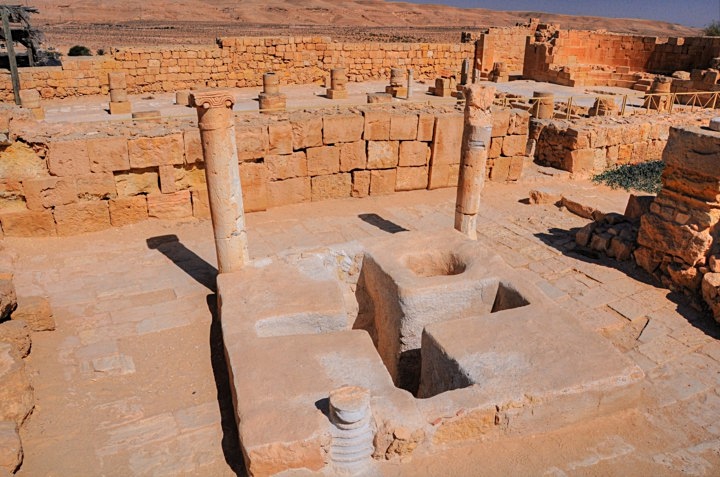 This design is similar to the baptistery in Avdat and in Shivta. 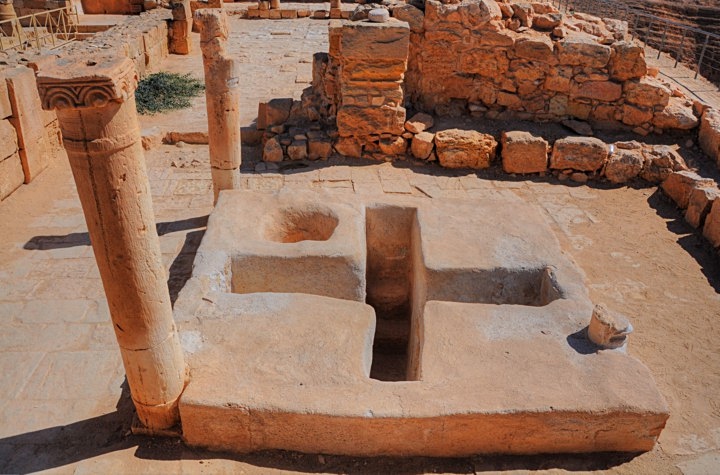 Describes the findings of Mamshit and Nabatean history.